Sure, a tear-jerking monologue or a heartwarming finale might be great for eliciting powerful emotions, but any true home theater fan knows it's really their subwoofer that allows them to actually feel a movie.

Charged with handling all those rumbly low frequencies that bass-heads can't get enough of, a good subwoofer is a necessary complement to any home theater speaker setup. After all, watching two giant robots duke it out on a fancy 65-inch Ultra HD display can only be so effective without the room-shaking power to back up all those big-screen visuals.

But finding just the right sub for your particular system can be a challenging task.

Go too small for your space, and even Michael Bay-level explosions could end up sounding like wimpy duds. Go too big, and your family portraits could end up shattered on the ground. A good subwoofer is capable of honing in just the right balance for your setup, offering deep, roaring low frequencies without sacrificing accuracy -- all while seamlessly blending in within a user's entire surround sound system.

Designed by Andrew Jones, the Pioneer SW-E10 Elite Subwoofer aims to do just that -- and the results are mightily impressive. Seriously, just ask my downstairs neighbors. 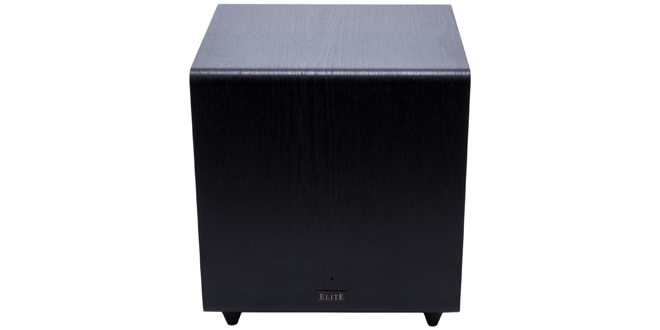 The SW-E10 Elite Subwoofer uses a 10-inch long-throw woofer with a down-firing driver design housed in a solid, sealed enclosure for improved transient response along with DSP processing for maximum linearity and output capability. In addition, the subwoofer incorporates a 2-inch Voice Coil for greater power handling and a built-in BASH high-voltage amplifier to provide up to 600 Watts peak power (300 Watts RMS). Finally, the unit is rated for a frequency response of 30 Hz - 150 Hz, giving it solid, but not quite stellar range for this price tier.

Weighing in at 34 pounds and measuring 13.2" x 15.4" x 13.4", the subwoofer offers a relatively compact form factor with a fairly standard yet elegant design. Marked by a pleasing black vinyl finish, the unit features Pioneer's "Elite" logo etched in gold letters toward the bottom of the front side, rounding out a sturdy and attractive aesthetic. Likewise, a small LED indicator light is positioned just above the logo, offering a subtle blue glow when the subwoofer is activated. Four rubber legs extend about 1.5-inches from the bottom of the sub, raising the unit off the ground and keeping it in place. On the back face, the device features a power switch that can be set to On, Auto, or Standby. In addition, the back also houses knobs for subwoofer volume level (it goes up to 11!), crossover frequency, and phase. Likewise, an LFE/Left input, Right input, and AC Power input are included as well. 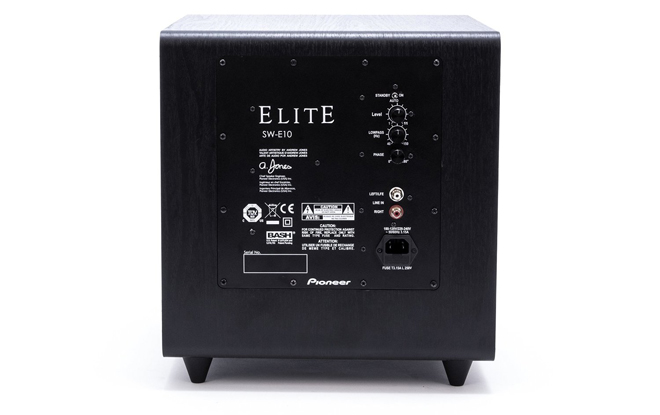 Once unpacked, setting up and configuring the SW-E10 was a pretty simple process, though as one should expect with any subwoofer, some tweaking here and there was needed to hone things in just right. For the purposes of this review, the sub was primarily evaluated in conjunction with a Pioneer VSX-1131 AV receiver (full review here), the Pioneer SP-PK52FS 5.0 speaker package, and a pair of Pioneer SP-T22A-LR Add-On Dolby Atmos Enabled Speakers (full review here).

After connecting an RCA cable from my receiver's sub output to the device's LFE/Left input, I turned the subwoofer's crossover frequency dial to 150. This allowed the receiver's dedicated calibration process to set the crossover. Likewise, I kept the Phase control dial set to 0. Finally, after initially setting the Level dial a little too low for the receiver's calibration microphone to pick up, I adjusted the Level knob to about 6, giving the sub enough volume to be recognized by Pioneer's Auto MCACC calibration process.

Once calibrated using MCACC, the resulting adjustments were mostly satisfactory, though I did end up decreasing the sub volume level just a hair to improve performance in my listening environment. On that note, it's important to point out that this review was conducted in a moderately-sized apartment living room, so performance results are specific to this type of environment. Finally, when it comes to placement, the unit was positioned behind my left floorstanding front speaker snugly nestled up near the wall where my display rests and against an adjacent shelving unit. This was really the only viable location in the room, and while at first this placement did lead to some occasionally unwanted vibrations, after some minor finagling I was able to mitigate this issue.

To evaluate the SW-E10's home theater performance, I ran through a plethora of Blu-ray discs and streaming content, including 'Pacific Rim,' 'Skyfall,' 'The Avengers,' 'Titanic,' 'Jupiter Ascending,' 'Inception,' 'Roger Waters The Wall,' several seasons of 'Game of Thrones,' and various clips from Dolby and DTS demo discs.

Simply put, movie performance was exceptional, providing full, deep, resonant LFE that blended organically with the rest of my speakers. Likewise, the SW-E10 provided a very sizeable upgrade -- much more so than I was expecting, to be honest -- over the smaller, less powerful 8-inch subwoofer that I usually use in my setup. 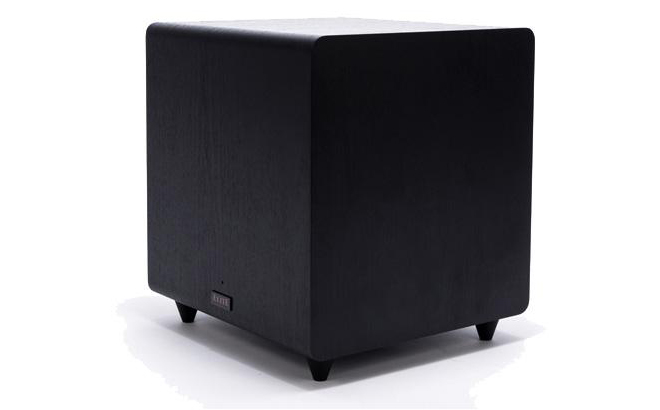 For testing purposes, I first watched a clip titled "Horizon" from the Dolby Atmos demo disc, and this proved to be a great pick for initial bass impressions. The short features lots of aggressive, rumbly effects, including revving engines, a crashing waterfall, and thrusting rockets, and the subwoofer handled them all with gut-punching presence. In fact, the clip's initial LFE cue was so powerful that it managed to knock over the router and modem I had resting on a nearby TV stand. This is when I dialed down the sub's level just a tad to achieve better balance.

Moving on to some 007 spy action, the opening motorcycle chase from 'Skyfall' also offered some mighty fine testing material. As Bond zipped across the screen, the sub purred and roared appropriately, enhancing the motorcycle's buzzing engine with a precise LFE punch. Likewise, James Cameron's 'Titanic' was given all the dramatic heft that it deserves, leading to a visceral sense of chaos that thundered and quaked in the boiler room and during the fabled ship's descent into icy waters -- sending powerful reverberations all around the room.

Of course, no subwoofer review could be complete without sampling some giant robot action, and the unit handled all of the metal-on-monster action of 'Pacific Rim' with bombastic oomph, giving impressive kick to all of the kaijus' deafening roars, Jaegers' blaring horns, and water's crashing waves. Similarly, a sample scene from 'Transformers: Age of Extinction' provided some of the most impressive and telling bass cues, demonstrating the sub's ability to slowly and seamlessly build in intensity as a propeller floated through the air with a gradually escalating drone. Likewise, the clip featured a variety of clanking metal effects that vibrated with palpably deep resonance and all the larger-than-life bravado that audiences have come to expect from a Bay flick.

From screeching dragons to zipping space ships, the SW-E10 continued to blast through all the demo material that I threw in its way, creating an impressively full and guttural range of low frequencies that never drew attention to the sub's location. Instead, the LFE effects were spread nicely throughout the listening space while naturally transitioning from the main speakers to the woofer. 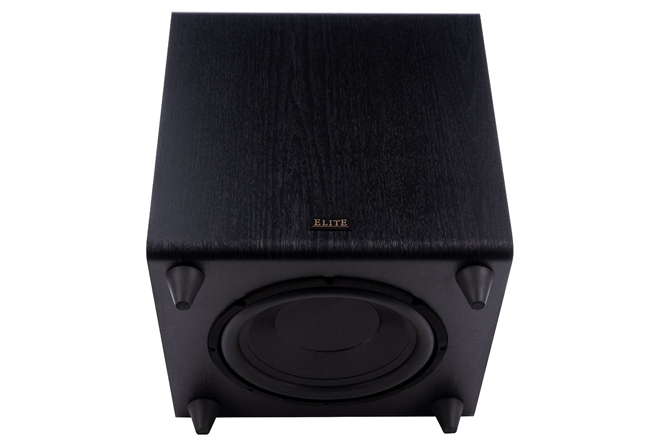 To cap off my movie testing, I sampled a few specific scenes and LFE cues from discs that I've experienced some balance and rattle issues on with budget subwoofers and sound systems that I've previously evaluated. This included a sequence in 'X-Men: Days of Future Past' where the sentinel ships arrive, the scene in 'Inception' with the car crash and avalanche, the alien invasion of New York from 'The Avengers,' and the creation segment from Terrence Malick's 'The Tree of Life.'

Thankfully, the SW-E10 handled the majority of this tricky material with impressive precision and stability, mostly avoiding any unnatural distortion or location-revealing clatter. With that said, a few bass effects, particularly from 'The Tree of Life,' did still come across as noticeably overpowered, belying the sub's otherwise steadfast balance and seamless integration with my other speakers. This discord with the rest of my surround sound system could have been exasperated by room dynamics and placement limitations, however, and if I were able to tweak things a bit more it's possible that I could have achieved better results. 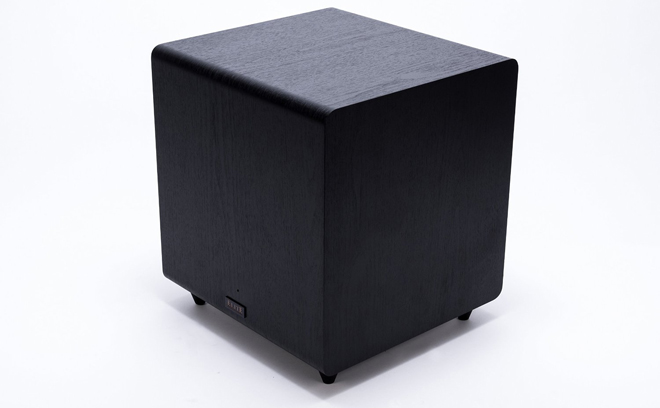 For mid-range speaker systems in moderately-sized rooms, Pioneer's SW-E10 Elite Subwoofer proves to be a very impressive performer. In fact, the time I got to spend with the unit has now made my usual 8-inch sub sound downright wimpy by comparison.

Whether or not this model suits your needs will come down to a variety of factors. While the 10-inch subwoofer worked great with my Pioneer speaker system and specific room dynamics, the SW-E10 might not pair as well with larger surround sound systems and bigger rooms. Likewise, the sub isn't capable of going quite as low as some user's might be looking for. And at $599, the MSRP is a bit high for the unit's specs, especially compared to similar models from SVS, making it a little hard to fully recommend the SW-E10 despite its strong performance.

Still, the precise and guttural impact I felt during movies like 'Pacific Rim' speaks for itself. Actually, it roars. Users with medium-sized rooms who are looking to upgrade to a 10-inch woofer from smaller, less powerful models should definitely consider Pioneer's SW-E10 -- especially if the unit ever goes on sale again (the price dipped to $350 back in May, which is a great deal). My usual system is capable of solid LFE for my space, but the SW-E10 gave my living room the genuine "movie theater" feel that only a beefy subwoofer can provide. I just wish the MSRP was a bit more competitive. Worth a look!