While the arrival of Dolby Atmos and DTS:X immersive audio formats have been an undeniably exciting development for home theater fans, new audio tech almost always means customers need new AV receivers, which can be a daunting and potentially pricey task.

Designed to serve as a feature-rich entry-level AV receiver, Pioneer's VSX-1131 is geared more toward the first half of that spectrum, letting users experience new immersive audio without totally breaking the bank.

With 7.2 channels, integrated support for Dolby Atmos, upcoming support for DTS:X (via a free firmware update), healthy connectivity options, and 4K HDR video transmission, the VSX-1131 covers all the bases, solidifying itself as a true next-gen receiver and a very enticing option for users looking to put together a 5.1.2 surround sound configuration.

When it comes to aesthetics, AV receivers aren't exactly known for standout looks. Most models are just big, beefy black boxes. Measuring 17.1 x 6.8 x 14.6 inches and weighing in at 22 lbs, the VSX-1131 is no different. Thankfully, it still happens to be a pretty attractive black box. With that said, outside appearances really aren't what matters here -- it's what's on the inside that counts.

Under the hood, the receiver features a high-grade 384kHz/32bit DAC (AK4458) produced by AKM. The unit offers support for 7.2 channels with 170 W/ch (1kHz,1%[email protected] 1ch Driven), allowing for up to a 5.2.2 immersive audio configuration with two height speakers/modules or up to a 7.2 surround sound configuration with traditional surround back speakers. And for users not interested in 7.1 surround sound, customers can also use the surround back connections to set up a powered Zone 2 for additional stereo audio in a separate room. Likewise, users not interested in overhead audio can also use the height connections for a speaker B system.

The receiver also includes a standard remote control which offers a new simplified design compared to many previous Pioneer models. While I was initially taken aback by the comparatively slim set of buttons, after getting acquainted with the new layout, I actually grew to prefer it a lot more than the company's older overstuffed and cluttered remotes. In addition, users can opt to use Pioneer's iControlAV5 app for iOS and Android devices to control their unit -- but sadly, I was not able to get this app to work properly on my Galaxy S4 smartphone. Finally, a standard power cord, an indoor FM antenna, an AM loop antenna, and a speaker setup microphone are all included as well.

With everything unpacked and ready to install, setting up the VSX-1131 was essentially a breeze. After connecting my speakers to the appropriate terminals with banana plugs, and hooking up my display, PS4, and Roku 3 with HDMI cables, I simply turned on the receiver and got started. Upon initial boot, the unit greets users with a standard setup screen guiding customers through a painless configuration process that allows users to designate their specific speaker array and then run the company's MCACC (Multi-Channel Acoustic Calibration System). 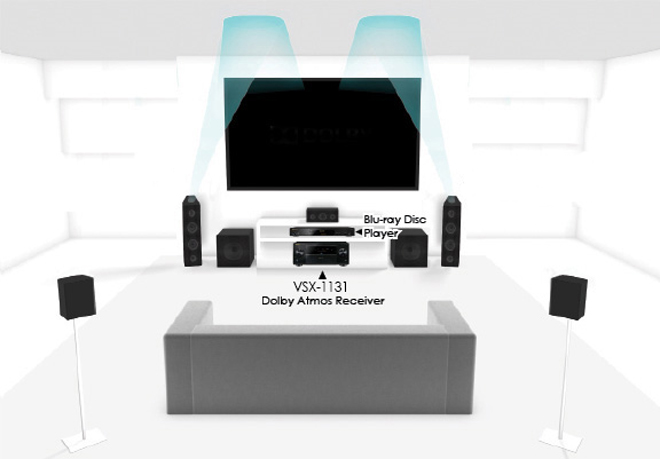 Once the included mic was plugged in and placed at ear level in the central listening position, the receiver's MCACC cycled through various test tones, automatically configuring the optimum volume level for each speaker, the crossover frequencies, and the distance from the listening position, along with corrections for distortion caused by room acoustics. With the process complete, I double checked the results in the menu and came away pleased by their accuracy -- though, users can freely adjust these setting themselves.

Overall, menu navigation itself is solid, with access to various submenus for speaker configuration, assigning inputs, and other housekeeping options. Likewise, my time with the unit was mostly bug free with smooth usability. In fact, I only really encountered a major glitch once when the main menu simply would not pull up while watching a Blu-ray. Rebooting the device fixed the issue and, again, it only happened once during my three months with the product. With that said, the receiver would consistently flash a quick screen of visual artifacts -- basically a fleeting image of colorful vertical stripes -- whenever switching inputs or transitioning from video content to the receiver's menu and vice versa. This was only a very minor nuisance, however, and video passthrough itself was flawless.

To demo the receiver's object-based audio performance, I played back a wide variety of Dolby Atmos, Dolby TrueHD, Dolby Digital Plus, DTS-HD MA, and PCM content, including Blu-ray discs, and streaming titles from various sources like Netflix, VUDU, Amazon, HBO GO, AMC, Showtime, STARZ, and more. For the majority of my testing I opted to keep the device in its "Direct" listening mode, minimizing processing while still engaging the unit's MCACC speaker calibration. Likewise, I primarily listened to native Dolby Atmos content and up-mixed Dolby Surround content with the receiver's "Reflex Optimizer" mode engaged.

According to Pioneer, the Reflex Optimizer setting "optimizes the performance of your up-firing elevation speakers for your listening environment, by aligning the phase of direct and indirect sound, matching the basic tone, and optimizing the upward-oriented frequencies." While I kept the mode on for most of my review, when toggling it on and off I didn't really hear much of a difference in most Atmos content, though one scene in 'Jupiter Ascending' with voices in the overhead space did offer noticeably more reverberation with the optimizer on.

For the full 5.1.2 experience I sampled the aforementioned 'Jupiter Ascending,' along with 'Roger Waters The Wall,' the January 2015 'Dolby Atmos Demo Disc,' and several seasons of 'Game of Thrones.' To put it simply, overall audio quality was fantastic. The receiver handled amplification and processing without any discernible hitches, producing clean, clear, and full-bodied sound all around the room, offering a true immersive audio experience with my upward-firing modules. Though the add-ons couldn't always generate a true sense of overhead audio (more on that in their dedicated review), height effects always brought an expanded presence to Atmos tracks. From delicately immersive forests, quiet conversations, and gently cascading rain storms, to roaring fighting pits, rocking guitar riffs, clashing swords, soaring dragons, and enveloping space battles, the VSX-1131 rendered each object-based track with proper nuance and heft.

In addition to native Atmos tracks, I also sampled the unit's Dolby Surround upmixing which processes standard 2.0 and 5.1 tracks to sound like object-based mixes with overhead activity. My demo material included episodes of 'Stranger Things,' 'The Americans,' 'Orphan Black,' 'Preacher,' 'Penny Dreadful,' 'Ash vs Evil Dead,' and films like 'The Jungle Book,' 'Green Room,' and 'The Nice Guys.' Though some material benefited better from the upmixing than others, this mode worked quite well, effectively expanding the soundfield while bringing appropriate effects to the upward-firing modules.

To this end, 'The Jungle Book,' 'Penny Dreadful,' and 'Ash vs Evil Dead' offered the most convincing overhead upmixing, brining various atmospherics like crickets, birds, rain, and demonic screeching to the heights. With that said, Dolby Surround did occasionally have a habit of introducing some dialogue bleeding. For whatever reason, this was particularly evident with the VUDU HDX streaming version of 'The Nice Guys' that I watched, causing speech to bleed from the center channel and echo distractingly from the up-firing modules. Thankfully, this was not a noticeable issue on most content.

Finally, I also played back several standard mixes in their native Dolby and DTS modes, and general surround sound performance was equally strong -- minus the added immersion of the upward-firing modules of course. Likewise, I even took the time to pump up the decibels beyond comfortable listening levels, and the VSX-1131 was able to maintain high volumes without introducing notable distortion.

While menu navigation could be a little sluggish and stale, TuneIn played back without any issues, allowing me to connect to various internet radio stations. Likewise, after signing into my account through the on-screen menu, Pandora also played back without a hitch. And though users can't sign into Spotify through the receiver itself, customers can use Spotify Connect to link their mobile devices to the receiver for on-screen playback. Again, this mode worked just as advertised, though the menu design itself for all of these options is quite dull. Finally, Bluetooth performance was similarly strong, allowing me to easily connect my Galaxy S4 smartphone to play back various MP3 files and streaming services from my mobile device.

In addition to wireless music, the receiver also includes a USB port for connected music playback. To this end, I was able to play a collection of lossy MP3s and high-resolution FLAC and DSD files loaded on a flash drive without any issues. From Arcade Fire and Radiohead to Otis Redding and Norah Jones, music performance was crisp and consistent. Likewise, I also sampled Dolby Surround upmixing with several audio tracks, and while I prefer to listen to music in its native format, the processing expanded most tracks well while properly positioning vocals in the center channel. With that said, Dolby Surround is not available for DSD files.

Looking to the (hopefully near) future, the VSX-1131 also boasts support for several upcoming features not yet available in the current firmware. The most notable of these are DTS:X and DTS Neural:X decoding. Likewise, the device will also add TIDAL music streaming, Google Cast, and FireConnect Powered by Blackfire. That latter feature will allow the receiver to connect wirelessly with compatible Pioneer speakers anywhere in the home. Sadly, there is no word yet on when these updates are coming. 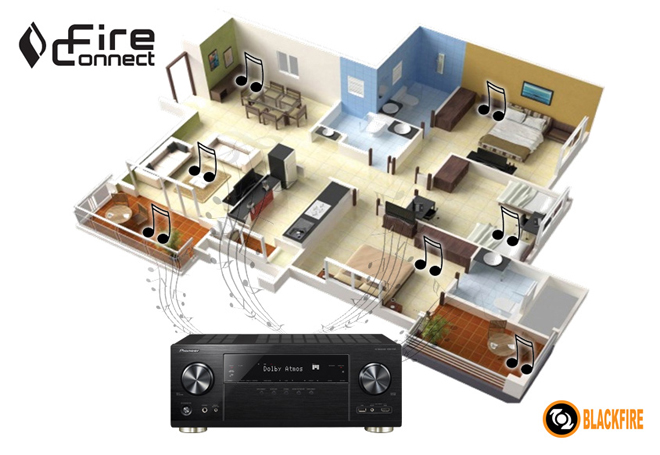 With its enveloping immersive audio performance, integrated Dolby Atmos support, and solid array of wireless music options, the Pioneer VSX-1131 cements itself as a strong entry-level receiver for users looking to set up a 5.1.2 system. With that said, the unit is still missing some of its promised features -- including DTS:X support which is already available from some competing brands -- though these additions are still set to arrive through an upcoming firmware update. Likewise, the receiver is restricted to only two height speakers, meaning that customers looking to create a more robust 5.1.4, 7.1.2, 7.1.4 system or beyond will need to invest in a higher level model.

Still, for a 7.2 channel immersive audio receiver, the VSX-1131 offers a nice set of features. Though the MSRP of $599 leans a little toward the high-end for this tier, pricing remains competitive for its performance, and the current Amazon sale price of $399 is a great deal. Users who need more than 7 channels or who want DTS:X right out-of-the-box will need to look elsewhere, but for customers in the market for a solid 5.1.2 AV receiver, the Pioneer VSX-1131 is definitely recommended!