For most home theater enthusiasts, there is no such thing as having "too many" speakers. From the early days of mono and stereo to modern 5.1 and 7.1 setups, we've always been looking for excuses to add even more channels to our audio systems. And now that Dolby Atmos is here, the sky is the limit. Well, more specifically, the ceiling is.

With the arrival of object based sound mixes and processing, audiophiles can now seamlessly add overhead speakers to their existing surround sound configurations, bringing another level of immersion to the home theater.

But what if a user's specific setup doesn't easily allow for actual overhead or in-ceiling speakers? Are these poor souls simply out of luck, forever doomed to experience 'Gravity' with its 5-star Atmos track tethered to the ground?

Not if Dolby and Pioneer have anything to say about it!

Designed to complement existing floor-standing or bookshelf speakers, the Pioneer SP-T22A-LR Add-On Dolby Atmos Enabled Speakers are capable of bouncing sound right off of your ceiling, simulating overhead audio without the expense or hassle of actually installing an in-ceiling speaker -- and believe me, the fewer opportunities there are for me to accidently fall off a ladder, the better.

The package includes two Dolby Atmos modules designed by Andrew Jones, each with a simple black vinyl finish and a non-removable grill -- matching the functional, no-fuss aesthetic of the Pioneer SP-PK52FS 5.1 Home Theater Speaker Package. The compact speakers measure 7-1/8" x 4-1/16" x 8-1/16" and weigh just under 4 pounds. Each 80-watt unit features a 1/2" High Efficiency Soft Dome Tweeter mounted in the center of a 4" Structured Surface Woofer. This upward-firing concentric driver array is specifically angled to bounce sound off of a user's ceiling. The speakers are rated for a frequency response of 180 Hz - 20 kHz with 6 Ohms nominal impedance and 85 dB sensitivity.

On the back of each unit is a pair of standard speaker wire binding posts with support for banana plugs. The modules are intended for use with the Pioneer SP-BS22-LR compact speaker or SP-FS52 floorstanding speakers, but they are also compatible with other flat-top speakers from any brand -- so long as they have enough room on top to accommodate the module's size.

After unpacking the speakers, setup is exceedingly simple. Users just need to place the modules on top of their existing floor-standing or bookshelf speakers with the drivers all angled in the same direction. For the best Dolby Atmos performance, users will need a ceiling with a horizontal flat hard surface and a height of 8' to 14'. Likewise, the top-mounted drivers on each module should be positioned at a user's seated ear-level height or higher while still remaining lower than half the height of the room. If these requirements can't be met, the manufacturer recommends that standard ceiling or in-ceiling speakers be used instead.

Once the speakers are positioned appropriately and wired to a Dolby Atmos capable receiver's height connections, customers simply need to power on their systems and run their receiver's acoustic calibration.

To test the Pioneer SP-T22A-LR Add-On Dolby Atmos Enabled Speakers I watched a wide variety of Dolby Atmos Blu-ray discs, including 'Jupiter Ascending,' 'Roger Waters The Wall,' the January 2015 'Dolby Atmos Demo Disc,' and several seasons of 'Game of Thrones.' Likewise, I also listened to numerous standard surround sound mixes with the Dolby Surround processing enabled on the receiver. And after spending a couple of months with this 5.1.2 system… I don't want to go back.

Though there were some notable quirks and caveats throughout my testing (more on those below), the modules successfully added another level of immersion to the soundstage, creating a higher plane of sound that seamlessly augmented and blended in with my existing speaker setup. From a pure audio quality perspective, the modules sounded great, offering clean performance with full-bodied atmospherics perfectly tuned to complement the tone and fidelity of my other Pioneer speakers. With that said, pairing the modules with other brand and size speakers could potentially yield less balanced results.

Of course, the real draw of these modules comes from their ability to simulate height effects -- and on that front, the SP-T22A-LR Add-Ons were very solid performers. With that said, while the speakers always managed to add a noticeable layer of extra audio when height objects were present in a track, some effects were more convincingly reflected off the ceiling than others -- leading to a slightly hit or miss sense of true overhead sound.

For instance, the Dolby Atmos demo disc features several audio only clips that switch back and forth between Atmos and standard surround sound, and these tracks proved to be among the most impressive with the modules. Rain and thunder in one of the demos reflected off of the ceiling from the add-ons very well, dispersing the storm around the room with a very clear sense of height presence. Likewise, another demo included various jungle sounds like birds, crickets and what appeared to be the gentle rattle of maracas shaking. The maracas, in particular, were clearly positioned in the overhead plane of the track, and the Pioneer modules did a great job of precisely bouncing the sound from above, truly making it seem as if the effects were created from the ceiling.

Other audio and video clips from the demo disc offered similarly good performance, including a short film with a floating leaf that circles around the room hovering up and down as it envelops the listener. With that said, many of the height effects present on the disc, including fluttering wings and cheering crowds, didn't always sound like they were actually coming from directly above. One instance, where space ships were supposed to rocket overhead, was particularly lacking with the modules, failing to truly sound like the ships were flying above the listener. Instead, more often than not, the add-ons created a more general sense of higher sound, effectively extending the front left and right speakers, making them feel much taller. Though this still results in an impressive expansion of the soundfield with Dolby Atmos mixes, it's not quite as direct or convincing as actual in-ceiling speakers would be. 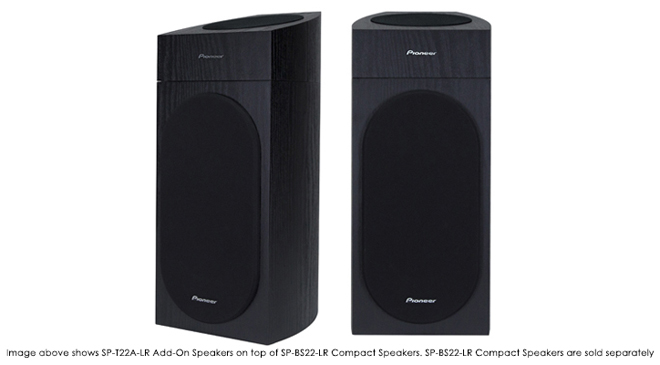 The rest of my demo material yielded comparable results, with the Pioneer modules offering both impressive and slightly lacking performance depending on specific height effects. One notable scene in 'Game of Thrones: The Complete Third Season' was a great example of the strengths and shortcomings of the add-ons. As Daenerys' dragons fluttered above and then attacked a slaver and his followers, the aggressively flapping wings boomed from the ceiling with a very strong sense of overhead presence. Meanwhile, however, the dragons' screeching didn't reflect as well, bleeding too much at ear-level from the modules.

Meanwhile, the Pioneer add-ons did an admirable job simulating overhead objects on 'Roger Waters The Wall,' effectively bouncing crowd reactions and a few flying planes and helicopters. 'Jupiter Ascending,' however, was a tad more erratic. Buzzing space ships and falling debris during an attack in one action scene reflected very well, but other noteworthy sequences with moaning voices and a computer voice specifically positioned above, offered much less convincing height presence. Likewise, while music cues were often placed in the height plane on many of the Atmos tracks I demoed, I rarely ever got a sense that the score was actually coming from overhead in any of the movies or shows I watched.

Being the OCD reviewer that I am, I also periodically listened to the Atmos add-ons under less conventional conditions, unplugging the rest of my system to hear the modules alone. This allowed me to focus specifically on the height effects and their positioning without any other distractions. Likewise, I tried several different seats in the room outside of the "sweet spot" in the center of the couch to hear how well the modules worked from off angle. Even when positioned all the way to the left or right of the seating area, sound still reflected pretty well. In fact, some effects actually sounded more convincing out of the sweet spot, ensuring a solid Atmos experience for all audience members. 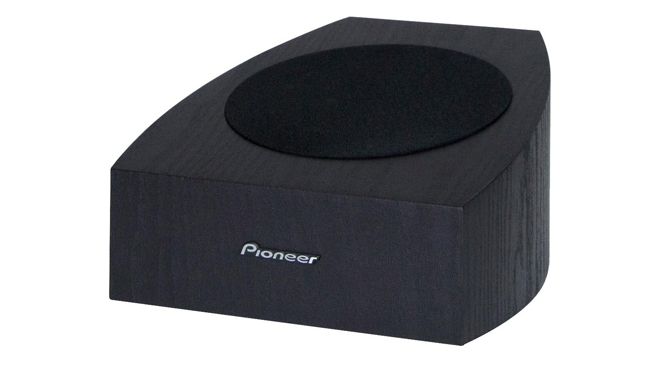 With all my testing taken into account, I came away quite pleased by the add-on speakers' audio quality and overall height performance. Several effects really did make it seem as if I had actual speakers on my ceiling. And even when the sound reflection didn't manage to create a genuine sense of true overhead audio, the speakers always added another layer of immersion to height objects in Atmos tracks, creating a noticeably taller and more enveloping soundscape.

This does make assigning a star rating a bit tricky, however. On the one hand, the modules are capable of a strong 4.5 when it comes to creating an added level of general immersion on the best Atmos tracks. But on the other hand, their overall ability to create a true sense of directly overhead audio hovers more toward a solid 3.5. With this in mind, I've split the difference to settle on a final score of 4 stars.

Users looking for a less expensive and cumbersome alternative to on-ceiling or in-ceiling installation should definitely consider the Pioneer SP-T22A-LR Add-On Dolby Atmos Enabled Speakers -- especially if you already own the Pioneer SP-PK52FS 5.1 Home Theater Speaker Package. Though (understandably) less convincing than actual overhead speakers, they still offer a very solid Dolby Atmos experience. And at a current sale price of just $160 per pair (deal effective through August 20) these are a pretty great bargain.

In fact, when I finally make the jump to a permanent Atmos system myself, these are the models I plan to buy. Recommended!

Sale Price 989.99
Buy Now
3rd Party 989.99
In Stock.
See what people are saying about this story or others
See Comments in Forum
Previous Next