Overview -- LG's 9-Series 8K NanoCell TV features an 8K resolution LCD panel with Dolby Vision, HDR10, close to 1,000 nits of peak brightness, and P3 wide color gamut coverage. Likewise, the display incorporates the company's Alpha 9 Gen 2 Intelligent Processor with advanced upscaling capabilities, along with ThinQ and webOS smart TV support. In addition, the set uses an IPS screen which offers much wider viewing angles over typical VA screens. Sadly, however, the IPS panel's superior viewing angles come at the cost of overall contrast and black level performance which just can't compete with VA LCDs. And though the TV does have full array local dimming, its implementation is mediocre with lots of visible blooming. Though the display might make a solid fit for customers who want an extra-large 8K screen for more casual living room viewing, based on our initial demo time, the TV's dark room home theater performance is unfortunately lacking.

As part of recent press demo, LG was kind enough to bring me out to its Silicon Valley Lab for a full day of testing with its new 8K displays. And while I spent the majority of my time with the company's 88-inch Z9 OLED, I also got to sample the new 75-inch 9-Series NanoCell TV (75SM9970PUA) as well.

Serving as the company's first 8K LCD model to hit the market, the 75SM9970PUA builds upon its 4K NanoCell siblings, carrying over many of the same features found on those flagship 4K sets, including an IPS panel for wide viewing angles, a Full Array Dimming Pro backlight, HDMI 2.1 connections, support for a full suite of HDR formats (with the exception of HDR10+), ThinQ and webOS smart TV capabilities, and Dolby Atmos support. But unlike the 4K NanoCell models which use the company's Alpha 7 Gen 2 Intelligent Processor, the 8K NanoCell display uses LG's more advanced Alpha 9 Gen 2 Processor with AI upscaling and 6-step noise reduction. 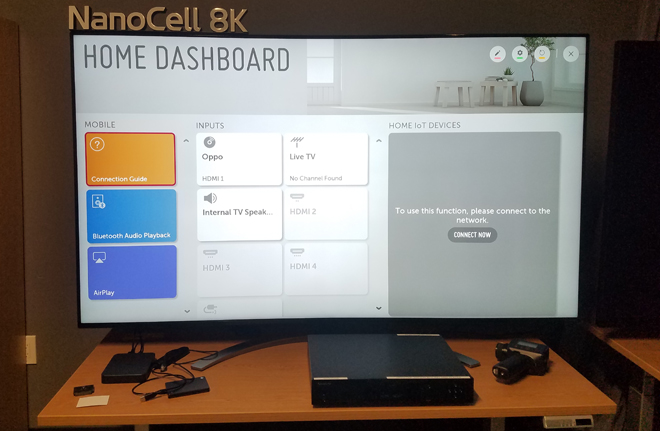 And helping to differentiate the TV from some competitors' 8K offerings, LG's 8K NanoCell TV has been engineered to produce high Contrast Modulation. In very simplified terms, this measurement essentially calculates how easy it is to actually distinguish between different pixels (for a more technical description CLICK HERE). According to LG, many competing 8K sets have lower Contrast Modulation as a result of methods used to enhance viewing angles on VA LCD panels -- something that isn’t an issue for this TV's IPS panel.

To demonstrate this point, the company showed a couple side-by-side demos with a Samsung 8K TV, using specific images and test patterns to reveal how the Samsung was prone to a mosquito net effect when viewing images up close. And while the demo did indeed reveal clearer pixels on the LG TV, I'm not sure how visible those differences would be during real world content.

Though not as premium in appearance as some of the company's high-end OLED models, the TV still offers a pleasing design with slim black borders around the screen. With that said, the panel's profile isn't as slim as some other competing sets, measuring about 2.8 inches at its thickest point. Rather than left or right feet, the screen rests on a pedestal stand that curves forward at both ends to make a U-shape. With the stand attached, the TV measures 66.1" x 40.9" x 15.1" and weighs 85.8 pounds. 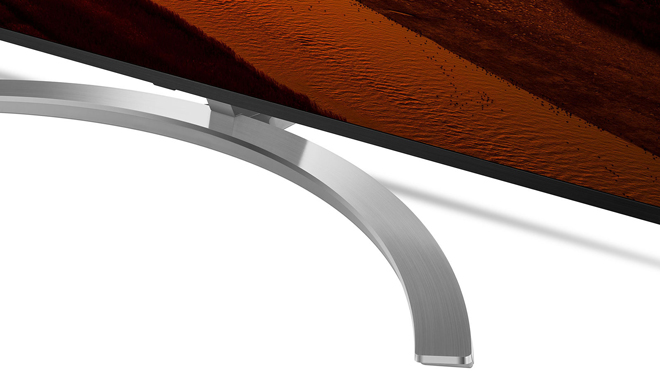 The back left of the panel house the TV's various connections, including four HDMI 2.1 inputs (one ARC/eARC), offering support for high frame rate (HFR) 120 fps playback, enhanced audio return channel (eARC), and gaming features like variable refresh rate (VRR) and an automatic low latency mode (ALLM) when connected to a compatible device. With that said, select HDMI 2.1 features will require a future firmware update to operate.

Outside of HDMI, the TV also includes three USB Ports 2.0 ports, an RF Connection, one Composite input, an Ethernet port, an RS-232C input, and a Digital Audio Output connection. In addition, Wi-Fi 802.11ac and Bluetooth 5.0 connectivity are implemented as well. And rounding out the package, is LG's standard Magic Remote. 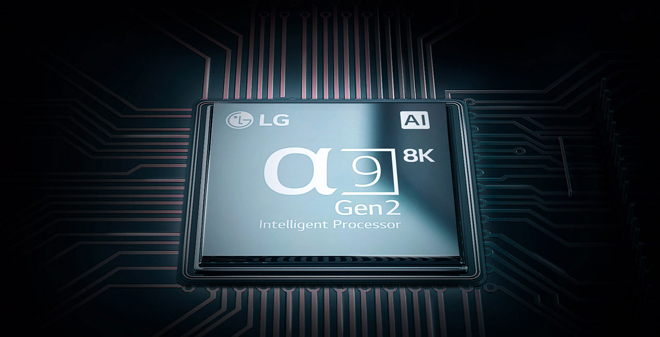 Under the hood, the display is powered by LG's Alpha 9 Gen 2 8K Processor with deep learning algorithm and ThinQ AI technology, allowing the TV to optimize picture and sound quality based on the source content being played. Likewise, the TV supports voice control via the Magic Remote or separate Google Assistant and Alexa devices.

To test out the SM9970PUA's 4K HDR performance, I sampled a variety of Ultra HD Blu-ray discs in HDR10 and Dolby Vision, including The Matrix, Game of Thrones, Blade Runner, Ex Machina, La La Land, a Dolby Demo Disc, and Spears and Munsil's Calibration Disc via an Oppo UDP-203.

For the most accurate and brightest out-of-box HDR10 and Dolby Vision settings, users should toggle on the Cinema picture mode with Local Dimming set to High or Medium and all other processing settings deactivated. With Local Dimming set to High, the TV is capable of achieving a peak brightness of about 966 nits, which puts it close to the 1,000 nit standard that a lot of HDR material is graded for. With that said, that figure is still quite a bit lower than the 2,000-plus nits that some flagship LCD from other manufacturers are capable of. Here' a full rundown of HDR brightness measurements on different size windows I recorded using a meter that LG provided: 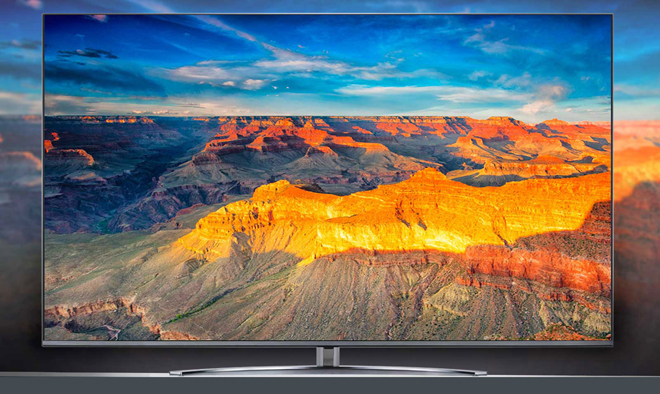 In general, though not quite as punchy as some other high-end LCD models, I found that the TV's brightness and P3 wide color capabilities translated into strong HDR movie performance -- that is, for certain types of content. Films and sequences with brighter contrast and palettes looked rather lovely here, with a great sense of clarity when being upscaled from 4K to 8K.

The Escape CG animated short featured on Dolby's Dolby Vision demo disc was especially striking, bathing the panel in gorgeous primaries and dynamic specular highlights. Likewise, the No Man's Land scene from Wonder Woman served as a great showcase for the TV's strengths, with ricocheting bullets and flames that popped from the screen.

Overall detail was also very impressive, with intricate textures perfectly visible on reptile scales and bird feathers during the Spears and Munsil demo reel. And thanks to the TV's IPS panel, color actually maintained vibrancy and accuracy quite well from an off-angle position, easily besting any VA LCD TV I've seen this year. 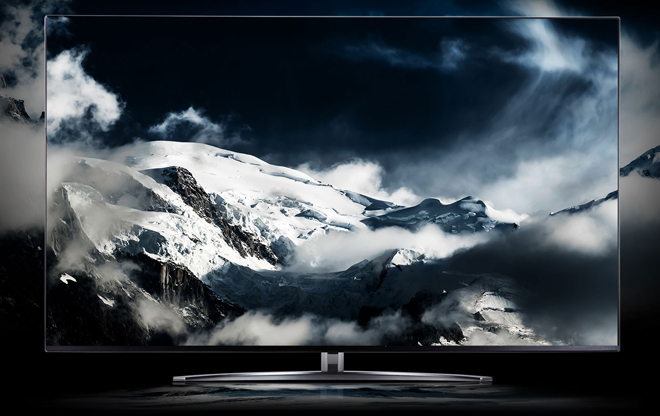 Unfortunately, however, the TV's IPS panel also had some clear drawbacks. Unlike VA LCD panels, IPS LCD screens are not known for producing particularly good contrast or black levels and, sadly, the 8K NanoCell TV was no different in this regard. While overall clarity, color, and brightness were all great, black levels were noticeably lighter than competing local dimming LCDs with VA displays.

Black bars were visibly elevated on wide-screen content and dark scenes lacked the inky quality that VA LCDs or OLED TVs are capable of producing. Even more troubling than the black levels themselves, though, were the blooming artifacts that occurred with local dimming activated.

Distracting halos around characters, objects, and text were very common in darker scenes, particularly sequences with brighter elements placed in front of shadowy backdrops. And while some degree of blooming is unavoidable on any local dimming LCD, the SM9970PUA had some of the largest and most glaring halos I've seen -- making them visible even with the lights on in the room.

A sequence where objects and animals are displayed against a black background on the Spears and Munsil demo disc and the opening crypt scene in episode 9 of Game of Thrones were two of the most telling demonstrations of the TV's blooming problems. Large halos outlining the characters were clearly and consistently visible in both cases and fluctuations in zones and brightness were evident during even slight movements. 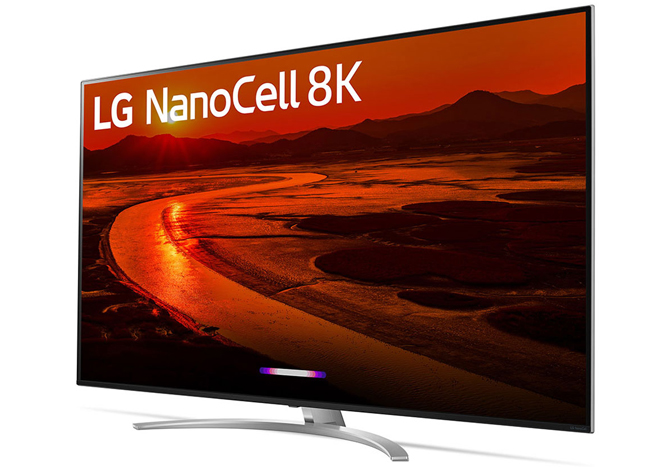 For comparisons sake, these scenes have all looked much better with deep blacks and virtually no blooming on several other local dimming TVs I've reviewed from Samsung, VIZIO, and TCL. Likewise, even the most problematic blooming that I did encounter on those TVs, were never as distracting as the blooming I viewed on the SM9970PUA.

LG doesn't reveal a zone count for its displays so I'm not sure how the 9-Series 8K TV stacks up to those other models in this regard, but whether it's due to a low zone count, a subpar algorithm, or simply the inherent contrast limitations of an IPS panel, the local dimming here just doesn't operate very well. Of course, users can turn off local dimming to eliminate blooming, but this causes black levels to appear even more elevated, creating a very washed out appearance in darker scenes.

To be clear, the TV still looked rather lovely when displaying brighter content, but the mediocre black levels and problematic local dimming end up limiting the set's overall home theater performance. And that's a bit disappointing for a flagship $5,000 8K TV.

LG's new 75-inch 8K NanoCell TV has a lot going for it -- including solid HDR brightness, wide color capabilities, advanced upscaling, and great viewing angles. Unfortunately, however, the IPS panel provides mediocre black level performance and the local dimming frequently produces distracting blooming in darker content. Likewise, despite offering great clarity, the actual benefits of the TV's 8K resolution are hard to discern from an average viewing distance (CLICK HERE for more detailed thoughts on the value of 8K itself).

Though the display might make a solid fit for more casual viewers who want an extra-large 8K screen that they can sit close to or off-angle from in a bright living room, based on our initial demo time, the TV's overall dark room home theater performance just isn't on the same level as many much more affordable 4K displays with VA panels or LG's own gorgeous 4K OLED TVs.

Basically, for the same current sale price, users are probably better off sacrificing 8K for 4K in order to snag the 77-inch version of LG's C9 4K OLED TV -- which offers better overall picture quality in almost every way.

List Price $4999.99
Go To Store
See what people are saying about this story or others
See Comments in Forum
Previous Next