Overview -- Designed to serve as the company's new entry-level 4K HDR capable projector model, the Epson Home Cinema 3800 utilizes 3LCD technology with up to 3,000 lumens of brightness, full 10-bit HDR processing, Active 3D 1080p support, and integrated speakers. But while the device can get impressively bright for a model in this price range, the unit does not include support for the P3 wide color gamut, limiting some of the benefits derived from HDR content. Based on our demo time, the projector offers solid performance for its class, but some users might prefer to sacrifice a few lumens and pay just a bit more for the Home Cinema 4010 model with wide color.

Aimed at providing 4K HDR projection at a more affordable price point, the new Epson Home Cinema 3800 utilizes the company's pixel-shifting technology. This feature uses three-individual high-definition LCD chips to parallel process millions of pixels in order to achieve a higher effective resolution. And though the resulting image is not technically true 4K Ultra HD, projectors with this ability still offer an improvement over Full HD.

But while most of Epson's more expensive Home Cinema projector models can cover the full P3 wide color gamut with HDR sources, this new entry-level model is sadly limited to the standard Rec. 709 gamut. With that said, the device is capable of 10-bit HDR color processing, so colors will be scaled to the best of the projector's abilities, and the device can play 4K HDR signals at up to 60 Hz -- making it a better fit for some media players and gaming consoles. Likewise, despite its more budget-friendly cost, the 3800 is actually quite a bit brighter than Epson's other step-up 3LCD models, boasting an impressive max of 3,000 lumens, which should work well for users with more ambient light in their rooms.

The Epson Home Cinema 3800 features a 3LCD, 3-chip design with support for 4K UHD (via pixel-shifting), HDR10 playback with Rec. 709 color gamut coverage, up to 3,000 lumens of color and white brightness, and active 3D capabilities at 1080p.

Meanwhile, the projector's lens uses Epson's proprietary multi-element Precision Glass Structure, and the unit also includes lens shift capabilities with up to ±60 percent on the vertical axis and up to ±24 percent on the horizontal axis for more flexible placement options.

To demo the new Home Cinema 3800, Epson had the projector set up with a 125-inch anamorphic screen in a dark home theater environment using the device's out-of-box settings. The demonstration included three scenes from the 4K Ultra HD release of The Greatest Showman in HDR10, with each selected clip designed to highlight different elements of the projector's picture performance.

The first sequence featured a conversation between High Jackman and Rebecca Ferguson's characters in an ornate room with light shining in through large windows in the background. Close-up detail was especially impressive during the scene, with tighter shots of Jackman's face revealing readily visible fine textures right down to his pores. Ferguson's red lipstick also popped nicely from the screen without bleeding or appearing exaggerated. But while detail and the warm color palette looked quite lovely, the image appeared a tad flat and contrast looked a hair washed out with only minimal discernable benefits from HDR. 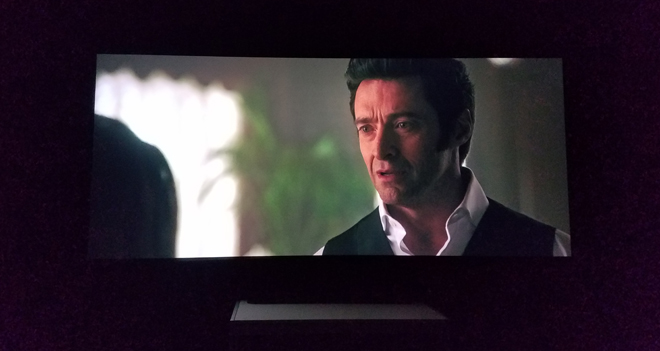 Switching gears to an outdoor scene, the second sequence featured Jackman and Michelle Williams' characters standing on a beach at sunset. With very smooth transitions visible in the yellow/pink gradations in the sky and wonderfully balanced contrast, this clip proved to be much more impressive overall. The drifting sun carried a nice specular sheen without blowing out, and despite the comparatively limited Rec. 709 palette, skintones featured a pleasingly rosy yet still natural complexion.

For the final clip, we moved on to Ferguson's performance of "Never Enough" on stage under a shining spotlight, offering a nice example of the projector's great HDR brightness performance. Various lighting sources shined with intense highlights that contrasted nicely against darker portions of the background. Likewise, the deep red hue of the stage's curtain was rendered beautifully with bold saturation. 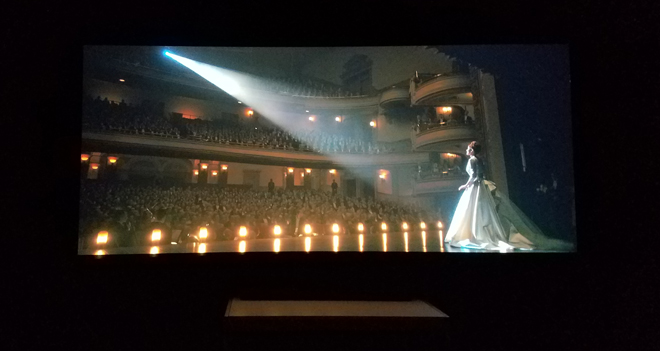 With that said, colors as a whole looked a little muted. And while the HDR processing appeared to work very well with bringing out specular intensity, the projector's black level limitations were more apparent during this scene, revealing a slightly milky gray quality in shadows. I also detected very minor fluctuations in brightness, but these were likely just a result of the auto-iris setting.

Despite these issues, the three demo scenes did a nice job of exemplifying many of the projector's strengths. Some limitations with color gamut and black level performance were apparent, but brightness and overall detail were quite nice, resulting in a pleasing sense of big-screen immersion.

Aimed at buyers who want a more affordable 4K HDR capable projector model, the Epson Home Cinema 3800 and Home Cinema 3200 offer solid specs for their entry-level pricing. Black levels are not on par with more expensive projectors, but contrast is about even with other models in this class. The lack of P3 wide color gamut support, however, might be a dealbreaker (it is for us, personally).

During the demo, there were some visible benefits in bright highlight performance as a result of the projector's HDR support, but without expanded color coverage, users will be missing out on one of the 4K HDR format's other main benefits. It's undertstandable that Epson would have to omit some features from this model, but the company's step-up Home Cinema 4010 offers P3 support for a current sale price of $1,799.99 -- just $100 more than the Home Cinema 3800 (and $300 more than the 3200). 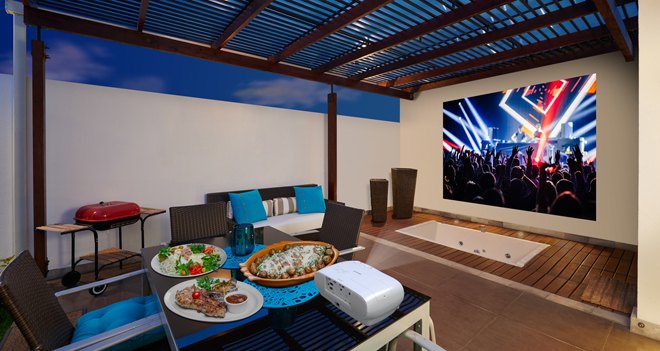 On the plus side, though, these new models do offer 4K HDR 60hz support (most useful for watching HDR content from streaming apps and HDR gaming), which is missing on the 4010. Likewise, they also offer brighter performance with up to 3,000 lumens versus the 4010's 2,400 lumens.

We'll need more time with the projector to offer a full verdict, but based on our initial demo time, the Epson 3800 and its sister 3200 model both look like solid entry-level 4K HDR projector options for users who value brightness and 4K HDR 60hz playback over wide color capabilities.

List Price $1699.99
Go To Store
See what people are saying about this story or others
See Comments in Forum
Previous Next