Overview -- With quantum dot color on several models, more local dimming zones, improved brightness, new AirPlay 2 support, and competitive pricing, VIZIO's 2019 4K HDR TV lineup is shaping up to be a great mix of performance and value. Likewise, its new 36-inch 5.1.4 sound bar model is set to serve as a great addition to its already impressive Dolby Atmos audio collection. We'll need more time with each model to offer a full judgement, but based on our demo time, there's a lot to like here. Recommended.

Note: Above retailer link is for the 65-inch M-Series Quantum model.

Highlighting a couple key picture and smart TV functions, the event featured VIZIO's usual assortment of demos and head-to-head comparisons with competing TVs and speakers. Check out full details on the new lineup and our hands-on impressions below!

Similar to previous launch events, VIZIO had all of its new TVs hung up across the wall of one of the event space's rooms. The collection included 65-inch V-Series, M-Series Quantum, and P-Series Quantum displays, along with a larger 75-inch flagship P-Series Quantum X display. 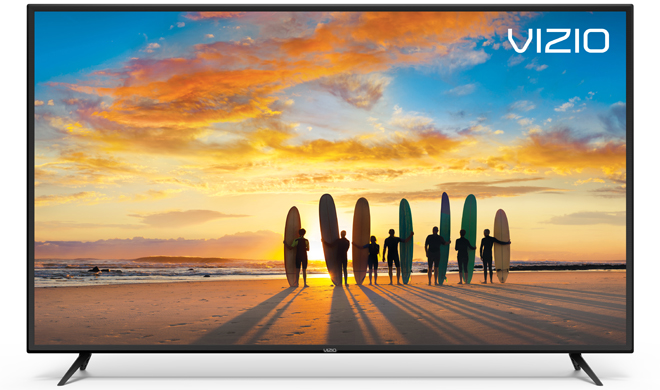 V-Series - Serving as a replacement of the company's previous D-Series and E-Series displays, the new V-Series actually comes in two different versions: one with up to 12 zones of full array local dimming and support for up to 400 nits of peak brightness, and a cheaper variation without local dimming and about 300 nits of peak brightness. Both versions feature Dolby Vision, HDR10, and HLG support. Sizes range from 40-inches to 75-inches. As was the case with all of the TVs demoed here, the reel of content shown was a bit limited and the setting wasn't the best for critical viewing, but the display looked quite punchy with solid contrast and color. 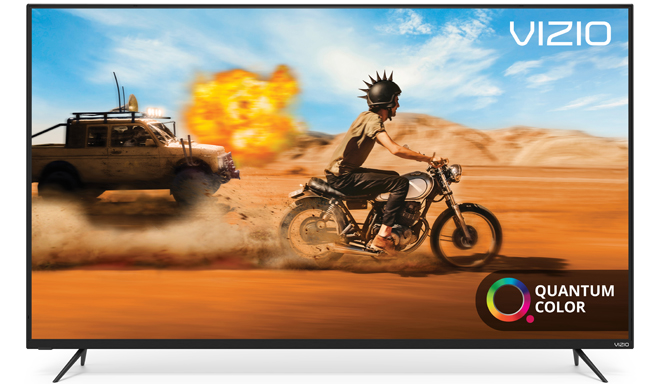 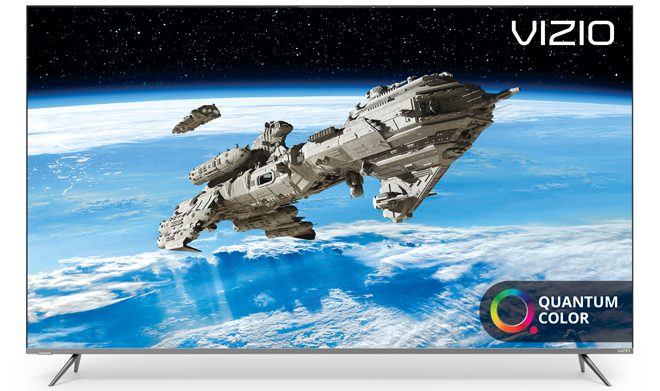 P-Series Quantum – Acting as the successor to last year's standard P-Series, the new P-Series Quantum offers Quantum Color, up to 240 zones of full array local dimming, and up to 1,200 nits of peak brightness. 65-inch ($1,399) and 75-inch ($2,499) models are available. CLICK HERE for our full review of the TV with detailed impressions. 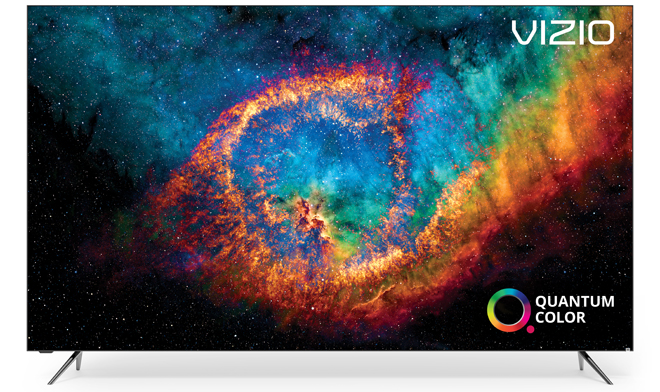 P-Series Quantum X – As the company's new top-of-the-line flagship display for 2019, the P-Series Quantum X replaces the 2018 P-Series Quantum. The new model features Quantum Color with around 84% Rec. 2020 coverage, up to 480 zones of full array local dimming, and up to 3,000 nits of peak brightness. 65-inch ($1,999) and 75-inch ($3,499) sizes are available. Though the TV was only shown with a limited reel of demo material, the display instantly stood out among the rest of the lineup, clearly differentiating itself with noticeably brighter specular highlights set against deep blacks. Unfortunately, I couldn't get much of a sense for the unit's real-world performance (you know, outside of a showroom setting), but what I saw left me wanting more.

Here's a full rundown of pricing and key specs for each 2019 VIZIO 4K HDR TV model: 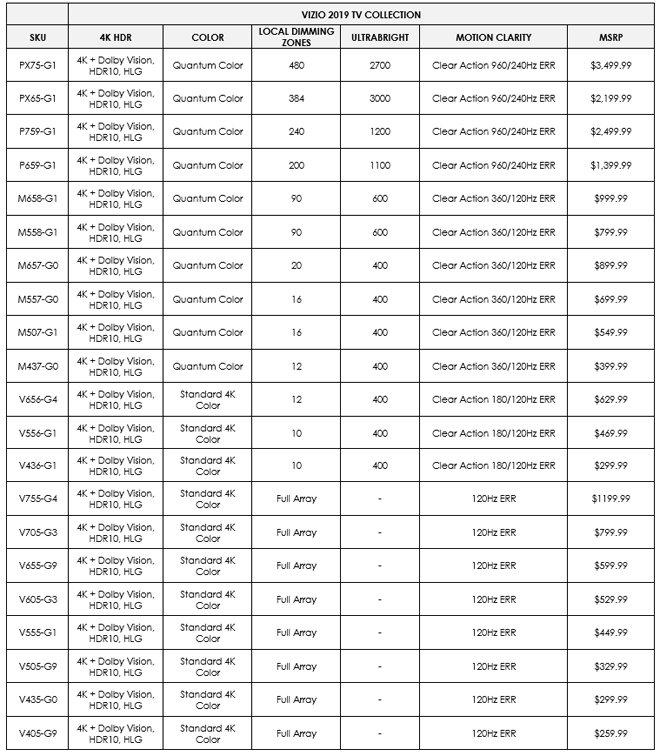 VIZIO is often praised for its use of full array local dimming -- even on its entry-level models -- and the company frequently offers a demo designed to highlight this capability across its lineup. For the demonstration, VIZIO once again had V-Series, M-Series Quantum, P-Series Quantum, and P-Series Quantum X panels all hung up side-by-side – but this time with their optical stacks and diffusers removed, allowing the raw LEDs to be clearly visible. This provided a unique view of how each model's dimming worked and how the gradual addition of more zones in each step-up model improved its ability to precisely brighten and darken the image at hand.

Using video clips of blooming cactus flowers atop a pitch-black background, the demo allowed viewers to see each cluster of LED zones dim, brighten, or turn off to coincide with the content being played. 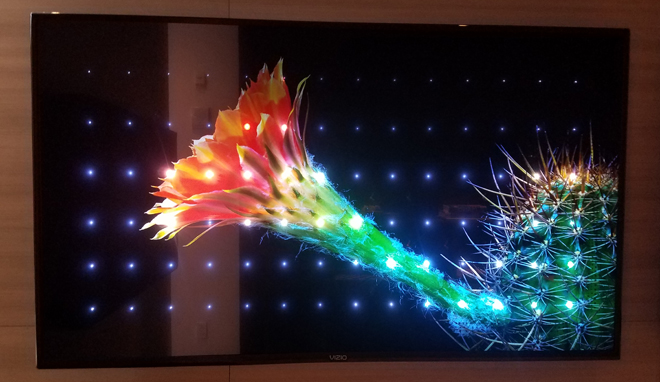 To this end, the V-Series TV's relatively limited number of 12 zones made it hard for the panel to really pinpoint highlights and dark sections, resulting in large quadrants of the bottom half of the screen brightening around the content, even when the cactus only filled smaller portions of the display. It was clear the dimming still had some benefit for the panel's contrast, but there were also obvious limitations. 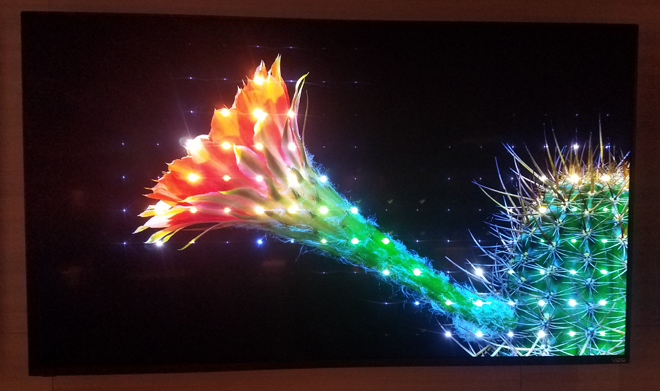 Meanwhile, the M-Series Quantum and its sizeable jump to 90 active zones resulted in predictably tighter clusters with more LEDs, allowing the image to brighten and darken more precisely around the cactus and growing petals. There was still some spill-off into areas surrounding the content, creating a kind of border of light, but the zones were clearly more honed in. 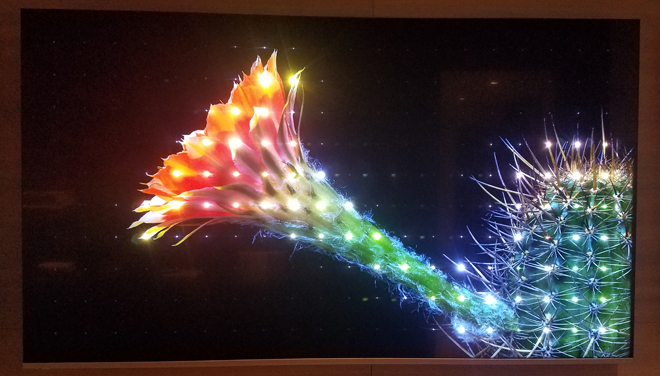 Even more impressive, however, was the P-Series Quantum and its 200 zones, which allowed its smaller LED clusters to concentrate even closer behind the content itself, leaving most of the black areas completely dark. 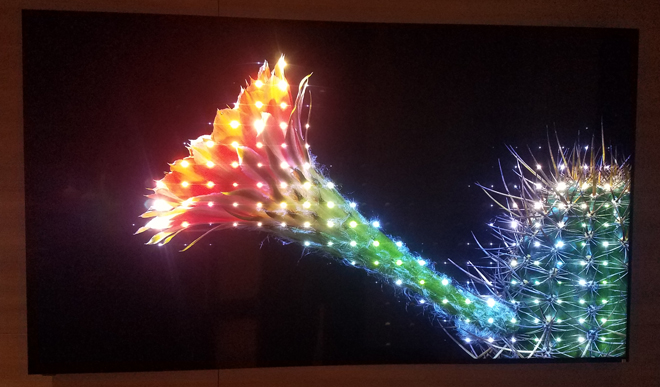 And finally, the P-Series Quantum X offered the highest performing dimming by far thanks to its 384 zones, essentially allowing just the areas behind the cactus to brighten with impressive precision and little to no light bleed into the dark portions of the image.

In previous years, VIZIO has typically pitted its flagship LCD against one of LG's OLEDs -- but for this year's head-to-head demo the company actually placed its M-Series Quantum TV against Samsung's new 2019 Q60R QLED TV. Both TVs serve as each company's entry-level model with quantum dot support. But while the VIZIO boasts full array-local dimming, the Samsung only sports an edge-lit backlight. For demo purposes, both displays were placed in their default Movie or Calibrated Dark modes and the lights were turned off in the room.

An HDR10 clip from the climactic underwater battle scene in Aquaman was then played on both sets at the same time. In general, the VIZIO and Samsung both looked quite nice, offering pleasing saturation and detail. With that said, the VIZIO had a clear edge when it came to black levels and overall contrast, giving the image an inkier appearance with slightly deeper colors. In comparison, the Samsung looked a tad washed out.

In addition to the Aquaman clip, a still 4K image of strawberries was also shown to give a further comparison of both TV's color performance. Again, the shades or red did look a bit richer on the VIZIO, but the Samsung TV looked pretty nice as well.

Of course, when one considers the fact that the 65-inch Samsung Q60R actually sells for an MSRP of $1,799 (though it's available for a current sale price of $1,399) and the 65-inch VIZIO M-Series Quantum retails for just $999, the differences in performance become much more telling. Based on this demo at least (an important caveat), despite the Q60R's higher price tag, overall picture quality did look better on the more affordable VIZIO.

Beyond picture quality demos, VIZIO also showed off some of the new SmartCast 3.0 features set to roll out to its display lineup later this summer. And though a 2019 model was used for the demonstration, all of the updated features will be coming to past SmartCast TV models as well, going back to the company's 2016 collection.

Among the improvements set for release, include upgraded interface performance, resulting in snappier navigation. To be honest, I've always found the SmartCast platform to be rather sluggish compared to some other smart TV systems, but the demo did indeed show much more responsive transitions from apps to the home screen and vice versa.

In addition, the UI will also be getting more content-centric icons and recommendations, offering movie and show suggestions with a handy logo in the corner of each thumbnail that displays which streaming service the title is on. These spotlighted content options will be a mix of personalized recommendations, editorial selections, and promotional suggestions.

Finally, VIZIO also showed off the beta version of its upcoming AirPlay 2 support with HomeKit integration. As part of the demo, Siri voice control was enabled via an iPhone, along with the ability to instantly send picture galleries to the TV screen as slideshows. Likewise, iTunes content streaming was also showcased, enabling the iPhone to send an iTunes 4K Dolby Vision stream of Bumblebee to the display. With that said, Apple's current implementation of AirPlay 2 does not allow for the transmission of Dolby Atmos audio from its app to the TV.

For demo purposes, VIZIO pitted the 36-inch 5.1.4 sound bar against Sony's HT-Z9F which is a 3.1 system that offers virtualized 7.1.2 Dolby Atmos audio. The opening scene from Mad Max: Fury Road was played on both systems, first on the Sony and then on the VIZIO. The sequence in question featured voices booming from all directions and deep LFE from revving engines.

Though the Sony did do a solid job of creating a wide soundscape from a 3-channel sound bar and subwoofer, the system didn’t really create a convincing sense of overhead or surround sound. In contrast, the VIZIO system and its separate rear satellites and genuine up-firing drivers created an absolutely engulfing sense of immersion, clearly spreading all the voices around the room in a hemispherical dome of audio.

To be honest, it really wasn't even a close comparison. The Sony unit sounded like a great sound bar, but the VIZIO package sounded like a great entry-level home theater system. And again, that difference in performance becomes even more impressive when one considers the fact that the VIZIO 36-inch 5.1.4 system is set to retail for $699 and the Sony HT-Z9F currently retails for $899.

Meanwhile, a new 36-inch 2.1 sound bar unit and its slim subwoofer were also demoed. The compact subwoofer is designed to be easily tucked under a couch or hidden in the corner of a room. For the demonstration, the wildfire scene from the "Blackwater" episode of Game of Thrones: Season Two was played. Since the bar does not include up-firing drivers or satellites, the system used its DTS Virtual:X mode to simulate surround sound and overhead audio.

The unit did a nice job of creating an enveloping sense of space with wide left and right separation and an expanded sense of vertical height, but there was no real sense of surround sound. Likewise, though the LFE was decent considering the impressively slim design of the subwoofer, the wildfire explosion did lack the oomph and distinct rumble I'm used to hearing on heftier systems. Still, for an entry-level stereo sound bar system priced at just $149, the audio quality was quite solid.

Finally, on the subject of DTS:X support -- one of the few features missing from VIZIO's flagship sound bars -- VIZIO said that it remains open to the possibility but has no current plans to implement it. The company cited the comparatively small number of DTS:X disc titles and lack of DTS:X streaming titles as the main reason for the omission. As of now, it just doesn't see enough available content to justify the cost to the consumer.

Here's a full rundown of pricing and availability for each 2019 Sound Bar model:

Offering some key improvements over last year's models and a very welcomed expansion of quantum dot color tech to even more displays, VIZIO's 2019 4K HDR TV lineup is shaping up to be a rather impressive mix of performance and value. Likewise, the new 36-inch 5.1.4 sound bar system is poised to offer a nice intermediary option between the previously released 36-inch 5.1.2 system and the 46-inch 5.1.4 system.

We've actually already gotten a chance to review the new P-Series Quantum TV in full (CLICK HERE), and have come away very impressed. We'll need more one-on-one time with the rest of the lineup to make full judgements on them, but based on what we've seen so far, VIZIO's 2019 collection further cements the company as one of the best bang-for-your-buck home theater brands on the market. Recommended.

List Price $999.99
Go To Store
See what people are saying about this story or others
See Comments in Forum
Previous Next