And now, the company has taken everything we liked about that model and made it all even better through the addition of Dolby Atmos up-firing drivers, a slightly larger subwoofer, and 4K HDR passthrough.

From a design standpoint, the sound bar itself features a very similar style as the previously released SB3651-E6 with a standard but pleasing look marked by a simple rectangular shape, a black cloth grill, and silver accents on the sides. An array of LED indicators is housed on the front left side which can flash to signify changes to volume, settings, signal type, and input selection. In addition, the top of the sound bar includes buttons for power, input, Bluetooth, and volume. Meanwhile, the satellites and subwoofer both feature a complementary industrial aesthetic with a black and silver color scheme.

Under the hood, the sound bar features three drivers (one for the left, center, and right channel), along with two up-firing speakers designed to bounce sound off of a user's ceiling for Dolby Atmos height effects. Meanwhile, the subwoofer features a 6" driver and the two satellite speakers each feature a 2.8" full range driver. As a whole, the system is rated for a sound pressure level of 101 dB and a frequency response of 40 Hz - 20 KHz.

The back of the sound bar unit includes a section for power, AUX, and optical ports on the left side, and another section with an HDMI ARC output, HDMI input, Ethernet port, and USB port on the right side. Thankfully, as a very welcomed upgrade over last year's model, the HDMI input does now include support for 4K HDR and Dolby Vision passthrough. Wireless Bluetooth and 802.11n Wi-Fi connectivity are support as well.

Likewise, the system offers Dolby Atmos, Dolby TrueHD, Dolby Digital Plus, DTS-HD MA, and DTS decoding capabilities (lossless formats via HDMI from a connected Blu-ray player). And if users prefer to disable the up-firing drivers, the device also supports DTS Virtual:X upmixing to simulate surround sound and height effects. With that said, the system does not include DTS:X decoding.

After unpacking the device, setup is pretty straightforward. For wired playback, users simply need to plug in the sound bar and subwoofer's power cables, and then run the included audio cables from the satellite speakers to the subwoofer (thankfully, they're long enough to satiate most users' needs). Once turned on, the sub will automatically pair with the sound bar.

From there, customers can hook up the included HDMI cable from the sound bar to their TV's ARC port. An additional HDMI device can also be plugged into the unit's video passthrough input as well.

Meanwhile, to get the most out of the sound bar's wireless playback capabilities, customers will need to download the SmartCast mobile app for iOS or Android. Once installed, the app can then be used to discover the sound bar and pair it with a user's Wi-Fi connection, enabling casting support for Chromecast-enabled music streaming services like Spotify, Google Play Music, Pandora, iHeartRadio, and more.

iHeartRadio stations are accessible directly through the SmartCast app itself, while most other services require users to boot up their individual apps. Once playback is started through a service like Spotify, however, customers can opt to return to the SmartCast app to control songs and see track info.

But while I eventually got wireless playback to work, I ran into some issues when trying to pair the sound bar to the mobile app and connect it to my Wi-Fi. For whatever reason, the app would repeatedly have trouble discovering the sound bar, forcing me to restart the sound bar and my smartphone several times before the process successfully completed.

Once finally connected, wireless playback worked fairly well during my testing, allowing me to cast streaming music and locally stored MP3s files from various apps on my phone to the sound bar. With that said, even after getting through the setup, there were times when the app would crash or the sound bar would suddenly become invisible to the app again. I've had similar issues with the SmartCast platform on other devices before and it's possible that there's something wonky going on here with my particular router. I'm not sure if the device itself is to blame, but wireless playback support was not as stable as I'd like during my testing.

In addition to streaming support, the app also offers access to an extensive selection of audio settings (also available via the included remote), allowing users to adjust the sound bar's bass, treble, balance, and volume. But though center and surround volume can be set individually, the system sadly does not offer separate volume control for the height channels. Meanwhile, the app and remote also offer the ability to select different EQ modes, including Direct, Movie, and Music.

In general, I preferred to use the Direct mode for most of my listening as this setting seemed to properly play Dolby Atmos, surround sound, and stereo soundtracks in their native 5.1.2, 5.1, or 2.0 formats. The Movie and Music modes, meanwhile, are capable of upmixing 2.0 and 5.1 sources to 5.1.2. In that regard, both modes do a solid job of expanding the soundfield with rear and height placement. In addition, the Movie Mode seems to bring a bit more oomph to native Dolby Atmos and surround sound mixes with slightly more aggressive bass.

For this review, I sampled a variety of Dolby Atmos 4K Ultra HD Blu-ray and streaming titles in lossless TrueHD or lossy Dolby Digital Plus, including Game of Thrones, Blade Runner, Blade Runner 2049, Jupiter Ascending, Justice League, Fantastic Beasts and Where to Find Them, Jack Ryan, and more. Likewise, I also listened to several clips from Dolby Atmos and DTS demo discs.

Without factoring in the height effects, the system sounds a lot like VIZIO's previously released SB3651-E6. Thankfully, that's not a bad thing at all. As a whole, the sound bar and its satellites were capable of creating a fairly wide and dynamic soundstage throughout my testing, with solid imaging, clean and properly centralized dialogue, and engaging rear effects, resulting in a genuine home theater feel.

Likewise, the 6-inch subwoofer included here actually performs a bit better than last year's 5-inch model, leading to a more cohesive sound. Tricky LFE cues like those found in Inception and The Tree of Life that caused some noticeable cabinet noise and rattle on the old subwoofer came through with a more balanced rumble on the 6-inch unit, even if bass was still prone to a slightly boomy quality. The woofer can't quite compete with larger models used in full-size systems, but it packs solid LFE for small to medium sized-rooms. 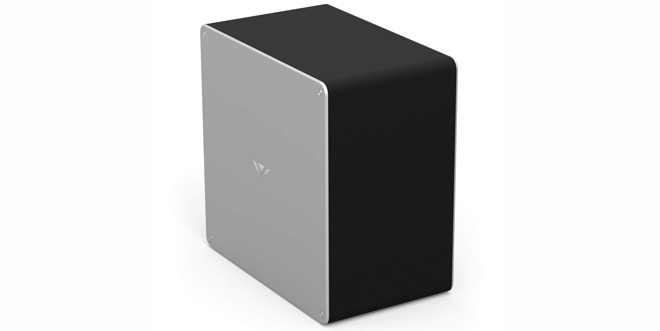 Of course, the major draw for this new model as a whole, is the system's support for 5.1.2 Dolby Atmos playback via newly integrated up-firing drivers designed to reflect sound off of flat ceilings. And thankfully, they end up performing very well for a system in this price range.

When playing Dolby Atmos mixes, the sound bar really comes alive, offering an extra level of immersion. Like most other up-firing speakers and modules, the overhead audio bouncing can be a little hit or miss, but the added drivers always do a solid job of creating a higher plane of audio when height effects are present in a track.

The rainstorm demo featured on Dolby's Atmos test disc proved to be a great showcase for the sound bar's overhead effects. As the tack switched back and forth between standard 5.1 and Dolby Atmos, the sound of pouring rain and thunder extended noticeably higher above the listening area, creating a convincing sense of height. The Amaze demo also offered a similarly encompassing sense of dome-like sound, spreading rainforest effects in all directions.

Likewise, swooping dragons in Game of Thrones, flying blimps and spinners in Blade Runner, and a hovering helicopter and creaking elevator in Spider-Man: Homecoming all highlighted the system's Atmos capabilities as well, making it sound as if certain effects were coming from overhead. 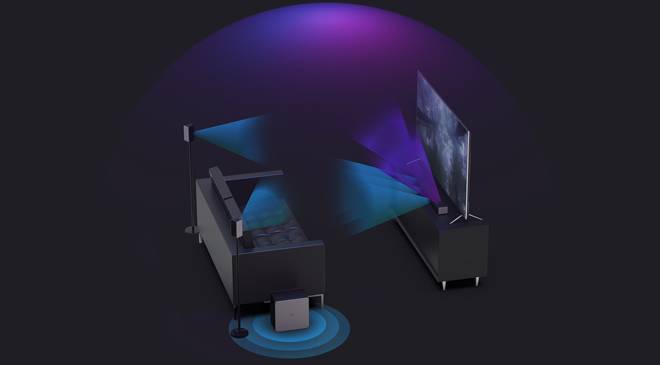 With that said, the sound bar's up-firing drivers weren't always quite as convincing as other dedicated Atmos-enabled speakers and modules that I've heard. For instance, a scene in Jupiter Ascending where a computer voice is supposed to register from above kind of fell flat, and a specific cue featuring a maraca shaking from overhead on the Dolby Atmos demo disc didn't register as high as other speakers have been able to simulate. It's possible that these shortcomings might be caused by the system's lack of a microphone setup process with acoustic calibration (typically featured on many AV receivers).

Still, even when height effects don't quite sound like they're emanating from the ceiling, the added drivers and audio objects always manage to bring a higher plane to the front soundstage.

And beyond native Atmos tracks, I also sampled the system's upmixing capabilities with standard surround and stereo mixes, including a Netflix stream of Star Wars: The Last Jedi. Though not as impressive as genuine Atmos playback, the sound bar did a solid job of extending certain effects to the height channels. On that note, though the sound bar can't play native DTS:X audio, the system was able to properly play DTS:X mixes in standard DTS-HD MA 5.1 or with upmixed front height effects. 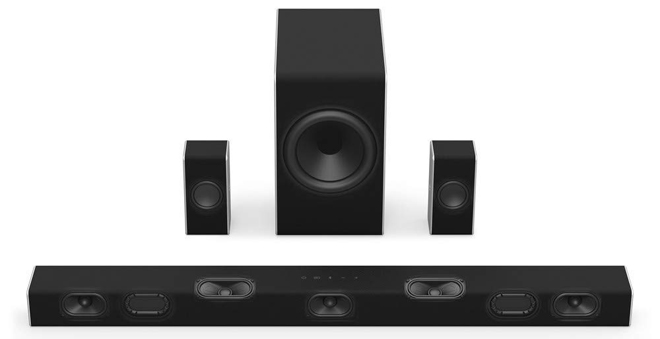 Outside of movies and TV shows, I also listened to a variety of streaming tracks and MP3s through the SmartCast platform, along with some songs via a Bluetooth connection from my Galaxy S7 smartphone.

Meanwhile, Music mode resulted in decent surround sound upmixing with height channels, creating a more enveloping yet less accurate sound. The overall sonics did veer toward a slightly bright quality, but overall playback was quite pleasing for a variety of music styles.

More than just a space-saving sound bar system, the VIZIO SB36512-F6 provides a genuine 5.1.2 home theater experience for under $500 -- making it one of, if not the, most affordable complete Dolby Atmos audio solution on the market.

I did run into some frustrations with the SmartCast platform and my Wi-Fi setup, but the unit's Chromecast and Bluetooth wireless music capabilities are robust… when they work. And while I do wish the unit supported DTS:X as well, the system is at least capable of playing lossless DTS-HD MA tracks.

Though it can't match the overall audio performance and impact of a traditional, larger, and more expensive multiple speaker/AV receiver configuration, this is a fantastic entry-level Dolby Atmos option for users who want to save some space and money without sacrificing full 5.1.2 support.

When it comes to value-priced Atmos options, the VIZIO SB36512-F6 is the new system to beat, cementing itself as our Editor's Choice Winner for Best Value Sound Bar of 2018. Highly Recommended!

Sale Price 389.99
List Price 449
Buy Now
3rd Party 389.99
In stock. Usually ships within 3 to 4 days.
See what people are saying about this story or others
See Comments in Forum
Previous Next