Many single-unit sound bar solutions from various manufacturers include virtualized surround sound modes or fancy beam drivers to simulate a multiple speaker configuration. And though some of these techniques can offer an engaging sense of space, they almost never equal the immersion of a genuine 5.1 setup.

With that in mind, VIZIO has once again opted for the real thing with its SB3651-E6 Sound Bar System -- combining a 3-channel sound bar unit with two compact rear satellites speakers and a wireless subwoofer.

From a design standpoint, the sound bar features a basic but attractive look with a simple rectangular shape, a black cloth grill, and silver accents on the sides. An array of LED indicators is housed on the front left side which can flash to signify changes to volume, settings, signal type, and input selection. In addition, the top of the sound bar includes buttons for power, input, Bluetooth, and volume. Meanwhile, the satellites and subwoofer both feature a similar aesthetic, offering a pleasing industrial look with a black and silver color scheme.

The back of the sound bar unit includes a section for power, digital, AUX, and optical ports on the left side, and another section with an HDMI ARC output, HDMI input, Ethernet port, and USB port on the right side. Unfortunately, however, the HDMI input does not support 4K HDR passthrough, limiting any signals sent through the device to HD. Wireless Bluetooth 4.0 and 802.11 a/b/g/n/ac Wi-Fi connectivity are support as well. Likewise, the system includes Dolby Digital and DTS decoding capabilities.

After unpacking the device, setup is pretty straightforward. For wired playback, users simply need to plug in the sound bar and subwoofer's power cables, and then run the included audio cables from the satellite speakers to the subwoofer (thankfully, they're long enough to satiate most users' needs). Once turned on, the sub will automatically pair with the sound bar.

From there, customers can hook up the included HDMI cable from the sound bar to their TV's ARC port. An additional HDMI device can also be plugged into the unit's video passthrough input as well. Likewise, if HDMI isn't an option, an optical cable connection can be used to connect to a TV or media player. 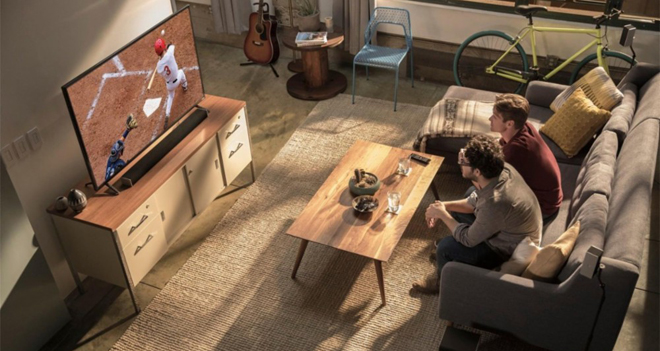 Meanwhile, to get the most out of the sound bar's wireless playback capabilities, customers will need to download the SmartCast mobile app for iOS or Android. Once installed, the app can then be used to discover the sound bar and pair it with a user's Wi-Fi connection, enabling casting support for Chromecast-enabled music streaming services like Spotify, Google Play Music, Pandora, iHeartRadio, and more.

iHeartRadio stations are accessible directly through the SmartCast app itself, while most other services require users to boot up their individual apps. Once playback is started through a service like Spotify, however, customers can opt to return to the SmartCast app to control songs and see track info.

For the most part, this all worked fairly well during my testing, allowing me to cast streaming music and locally stored MP3s files from various apps on my phone to the sound bar. With that said, the SmartCast platform wasn't always as reliable as I'd like. There were times when the app would crash, tracks would suddenly stop playing, or the signal would become momentarily disconnected.

Likewise, the SmartCast app sometimes had trouble re-discovering the sound bar after I turned it off and then back on again. This forced me to run through the setup process a few times -- though this did seem to correct itself and eventually I was able to reliably restart the unit, open the app, and still have the sound bar show up.

In addition to streaming support, the app also offers access to an extensive selection of audio settings (also available via the included remote), allowing users to adjust the sound bar's bass, treble, balance, and volume, along with the ability to select different EQ modes. These presets include Direct, Movie, and Music.

In general, I preferred to use the Direct mode for most of my listening as this seems to properly play stereo and surround sound tracks in their native 2.0 or 5.1 format. The Movie and Music modes, meanwhile, are capable of upmixing 2.0 sources to surround sound. In that regard, both modes do a solid job of expanding the soundfield of stereo content.

For this review, I sampled a variety of streaming titles and Blu-ray discs through the sound bar via a Samsung Smart TV and an LG UP970 connected via HDMI, including Star Wars: The Last Jedi, The Good Place, Inception, Logan, Fantastic Beasts, The Avengers, Game of Thrones, Agents of SHIELD, and more. Likewise, I also listened to several clips from Dolby and DTS demo discs.

Throughout all my testing, the sound bar provided a genuinely enveloping 5.1 experience, creating a relatively wide and dynamic soundstage for a compact system of this class. The sound bar unit itself offered solid imaging and properly centralized dialogue, though left/right separation was not quite as wide as some other sound bars I've heard.

Swooping TIE Fighters circled the room, smoothly transitioning from channel to channel in The Last Jedi, offering a great showcase for the benefits of true rear speakers. The default settings had the satellites boosted a little too much for my tastes, but users can adjust their volume in the settings menu.

Scenes from Fantastic Beasts and The Avengers also did a great job of highlighting the system as a whole, producing an enveloping soundscape more akin to a full-sized surround sound setup than a sound bar system. Little nuances and layers of effects were nicely rendered throughout the room with strong directionality during the sequence when Newt takes Jacob into his suitcase full of creatures, allowing one to make out tiny fluttering sounds, sharp chirps, and more aggressive screeches with nice clarity.

Meanwhile, the system did a great job handling all of the chaos during the Battle of New York in The Avengers, creating a great sense of subtle distance as ships and explosions thudded in the background while maintaining good balance for dialogue when playing at moderate volumes despite all of the action. 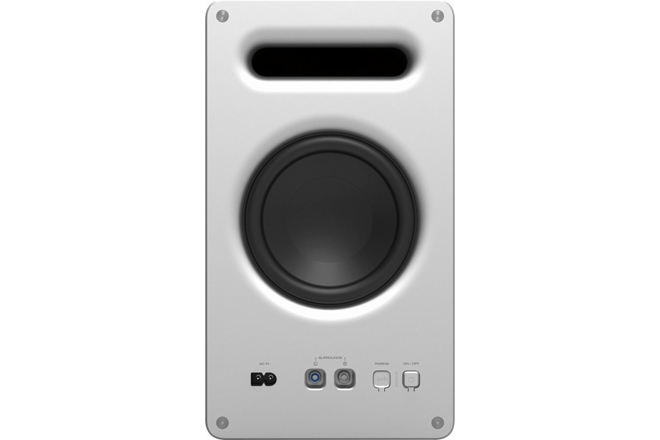 With that said, as engaging and unified as most material sounded, the system did reveal some limitations here and there. Balance and clarity could take a slight hit when pushing the sound bar at higher volumes. Likewise, the device favored a brighter profile overall, leading to a faintly sharp quality in the treble and higher-end of the mid-range. For whatever reason, this seemed to be exasperated when using the Movie EQ preset, causing speech to sound a little thinner. In contrast, Direct produced a fuller sound.

And though the subwoofer typically did a decent job of bringing some moderate oomph to the package, the unit just isn't on par with larger home theater models. Likewise, there were isolated times when more aggressive LFE cues seemed to push the sub a little too far, revealing its location while causing some minor distortion and harsh vibrations within the unit. This was especially true during the avalanche scene toward the end of Inception and the volcano eruptions during the creation sequence in The Tree of Life, leading to a lack of cohesion between the woofer and the rest of the sound bar.

Dialing the subwoofer volume down a bit (I ended up preferring -5 for the relatively small room I used for my testing), helped in this regard, but I could never quite find the right balance between rumble and cohesion. It should also be noted that, for whatever reason, bass output was dramatically reduced when using the Movie preset. Though this does mitigate some of the issues with cabinet vibration, I actually found the LFE response in Movie mode to be too subdued for most content. 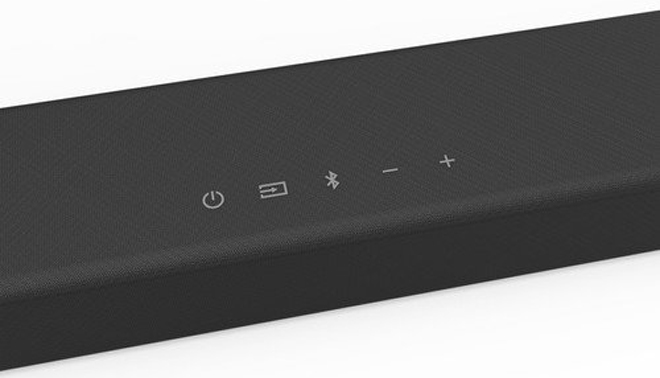 Outside of movies and TV shows, I also listened to a variety of streaming tracks and MP3s through the SmartCast platform, along with some songs via a Bluetooth connection from my Galaxy S7 smartphone. Whether playing Queen, Radiohead, Gnarls Barkley, Ariana Grande, Cardi B, AC/DC, Norah Jones, Pink Floyd, or the Game of Thrones: Season 7 soundtrack, the sound bar produced surprisingly engaging stereo playback in Direct mode and decent surround sound upmixing in Music mode.

Again, the general sonics did veer toward a slightly bright quality, but vocals remained clean and relatively full -- even if they did lack a bit of timbre toward the lower reach of the mid-range. Stereo separation was solid as well, and I actual found the subwoofer to be a bit more balanced with music than some movies.

As a space-saving and budget-friendly 5.1 audio solution, the VIZIO SB3651-E6 Sound Bar is a very solid performer. Thanks to its compact satellite speakers and wireless subwoofer, the system is capable of genuine surround sound playback, offering fairly immersive performance and extensive wireless streaming support for its class.

With that said, the subwoofer isn't always up to the task during more intense LFE activity, the lack of 4K HDR passthrough support is a bit disappointing, and the SmartCast platform can be prone to glitches here and there. Likewise, as Dolby Atmos and DTS:X sound bar models become more and more prevalent, 5.1 systems like this are starting to feel a little dated. On that note, VIZIO is actually set to release a new 36-inch Dolby Atmos 5.1.2 sound bar of it own with 4K HDR passthrough later this summer.

Still, at an MSRP of $249 for new units and prices as low as $180 for manufacturer refurbished models, this 5.1 system remains a worthwhile surround sound option for users who don't want the hassle and cost of an AV receiver with a larger speaker setup. Perfect for smaller living rooms, bedrooms, and apartments, the VIZIO SB3651-E6 Sound Bar is definitely Worth a Look.

List Price $249.99
Go To Store
See what people are saying about this story or others
See Comments in Forum
Previous Next