Overview - If want to upgrade your home cinema to Dolby Atmos and can't install in-ceiling speakers, the Klipsch RP-500SA Dolby Atmos Elevation / Surround Speakers might just be the solution. They produce rich life-like sound for Dolby Atmos soundtracks, can serve as full surround speakers when mounted to all wall, and even do a nice job playing music. The only potential con here is pricing -- $500 / pair ain't exactly cheap -- but if you have that budget, these are Highly Recommended. (Photos captured with the Nikon Z7, which I reviewed HERE.) 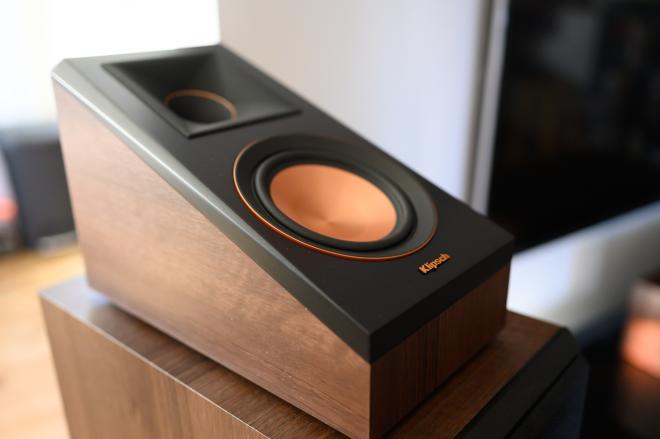 Dolby Atmos and DTS:X might be my favorite home theater technologies of the last ten years. Sure, bright, sparkling, colorful video on big-ass screens is a must have, but nothing connects me more to the thrill-ride of motion pictures than immersive audio. And, friends, nothing's more immersive than object-based hemispherical sound where music, voices, and effects hit you from all-around and overhead. In fact, when properly calibrated, Atmos and X make it harder to tell where your speakers are placed, leaving nothing in your room but the movie's universe.

As recently discussed during our Sony SS-CSE review, Dolby Atmos can be implemented in three different ways for the home:

Klipsch RP-500SA Dolby Atmos speakers are versatile enough to cover options two and three. And, though in-ceiling is the most articulate and precise for my ears, you can do a lot with Atmos-enabled or wall-mounted speakers, producing utterly convincing overhead immersion.

Are they right for you? Read on to find out. 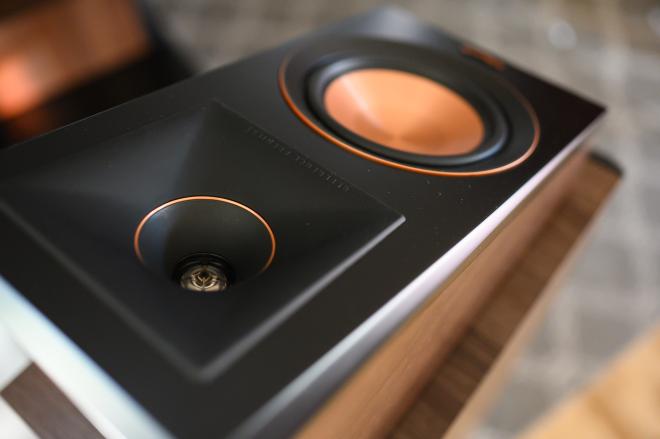 Available in Ebony, Walnut, and Piano Black finishes, Klipsch RP-500SA Dolby Atmos speakers look like a surround speaker that was sliced in half on a diagonal. The furniture grade wood siding is quite fancy-looking (especially the hand-sanded piano black option). A satin-black surface is home to a 1” Titanium LTS Vented Tweeter with Hybrid Cross-Section Tractrix® Horn as well as a copper-colored 5.25” Cerametallic Cone Woofer. Klipsch includes an acoustically-transparent magnetic grille as well, but it's a shame to put a cover on such handsome woofers. 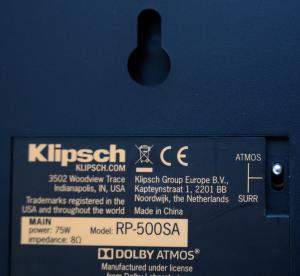 On the RP-500SA's backside, you'll find binding posts for connecting wire directly or via banana plugs. On the bottom, you'll find four sound-isolating rubber feat, a keyhole bracket for mounting each speaker on the wall (hardware not included), and a toggle switch that "changes the crossover network to adjust the response of the speaker for surround or Atmos elevation use. In Dolby Atmos mode, the speaker is voiced at conform to the specifications mentioned above. In Surround mode, however, the speaker is able to have a much flatter, broader frequency response - more true to the source material when directly fired into the room." 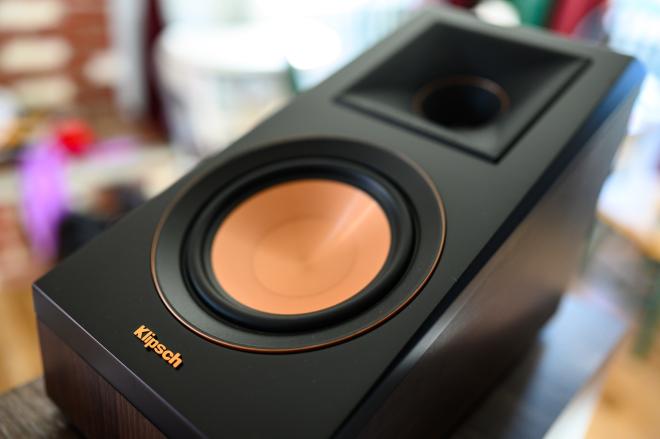 Setting up Klipsch RP-500SA Dolby Atmos Elevation / Surround Speakers is relatively easy, depending on whether or not you need to run wire up or through a wall. Aside from that need, you simply --

For this review, we have a whole system of Klipsch Reference premiere speakers in for testing, so I set the RP-500SA speakers atop two RP-8000F floorstanders in the front, and atop two RP-600M bookshelf speakers in the rear. After a quick calibration session, I double-checked my measurements. I prefer manually setting speaker distances to account for sound traveling up to the ceiling and back down, and adjust my height channel levels to a dB or two louder than the ear-level speakers (it seems to help with the overhead dome sensation). 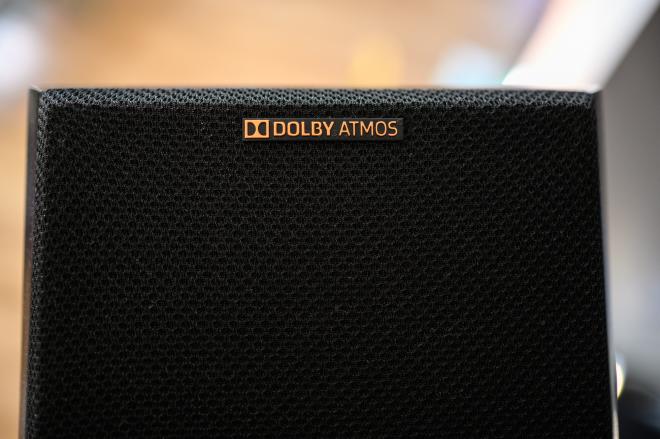 The great news about Dolby Atmos-enabled speakers is that I've yet to find ones that don't work once your room is calibrated. Likewise, Klipsch RP-500SA speakers deliver the Atmos goods:

When Sandra Bullock's tumbling through space in Gravity, she whip-pans up and over your head. When Neo and Trinity take a chopper to save Morpheus in The Matrix, the spraying sprinklers and tinkling bullet shells and thundering rotters are all around and above. When monstrous Kaiju rise from stormy oceans in Pacific Rim, their roars echo across your living room. When Max is hearing the voices of those he couldn't save in Fury Road, they often appear exclusively in height channels. And, when K sets off through a storm to track down Deckard and Luv in Blade Runner: 2049, it sounds exactly like you're a flying car racing through torrential rain.

These are the types of experiences that remain exclusive to Dolby Atmos, DTS:X, and similar surround technologies, and Klipsch RP-500SA speakers deliver this immersion with precision.

Still, there are occasions when reflecting sound off a ceiling doesn't quite work (I find this mostly with music, rather than effects), but for the most part, using these speakers is akin to having in-ceiling speakers.

For those wondering about how these speakers work as wall-mounted speakers, my apologies, I wasn't able to test them in that physical configuration. That said, I did listen to how they sounded in Surround mode, using both movies and music (more below), and the RP-500SA speakers will work great for wall-mounted applications as well. In fact, I'd suggest folks try that option first, if possible, simply because you'll get a touch more accuracy and articulation with overhead sounds since you won't have to do any ceiling reflecting. 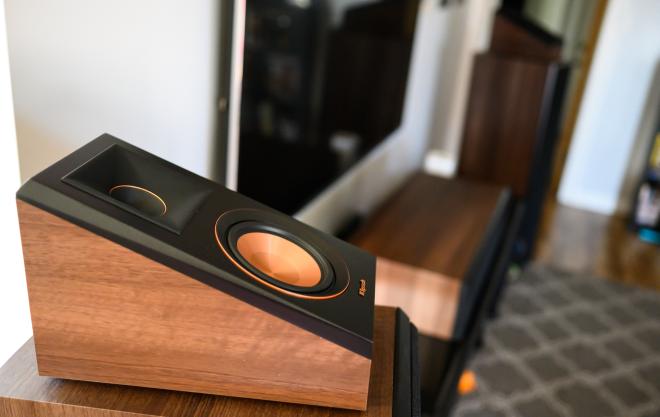 Many Dolby Atmos-enabled speakers are designed to do one thing -- reflect movie or TV show sound effects off a ceiling to trick your ears into thinking there are speakers above you -- but the best ones do a whole lot more than meet Dolby's minimum specifications.

Okay, maybe it's not all that dreaded, but playing full-range music through Atmos speakers reveals weakness instantly. But, as I first learned with the original Reference Premiere series speakers, music isn't a problem with Klipsch's Atmos-enabled speakers. You can actually run them configured for Atmos, blasting music, and it sounds like the music is coming out of in-ceiling speakers.

For this portion of our testing, I streamed a number of sources to the  Klipsch RP-500SA speakers in Dolby Atmos and Surround mode, covering a variety of musical genres. From the operatic rock n' roll of Queen via Spotify... to the shredding speed metal of early Metallica via vinyl... to heavenly beats of Queen B via YouTube (#ToddlerDanceParty)... to my growing collection of MP3-encoded musical scores... I listened for clarity and tone. Vocals were clear, guitars were crisp, and violin strings were smooth.

And again, while all of this was happening, it felt like my in-ceiling speakers were ON, but they weren't, it was just the RP-500SA's operating at ear-level the whole time.

In short, RP-500SA speakers punch way above their weight class.

Granted, they need a subwoofer to bring thumping bass to hip hop and rock music, and they don't have quite the same range as 6.5" woofers in the height speakers you'll find in the Klipsch RP-8060FA or RP-280FA Dolby Atmos Floorstanding Speakers. Still, the RP-500SA are the real deal. They reproduce clear vocals and rich midrange in Dolby Atmos mode, and sound even more transparent when toggled into Surround mode.

With a robust combination of versatility and high-quality sound, Klipsch RP-500SA Dolby Atmos Elevation / Surround Speakers are not only among the best speakers Atmos speakers you can buy today, but they're genuinely good speakers. Yes, I'd argue that the larger woofers in the RP-8060FA will give you more range. And $500 price is on the higher side. But, if you have the funds, the RP-500SA hits the sweet-spot of price, performance, and quality. Highly Recommended for anyone looking to add speaker-top or wall-mounted speakers for Dolby Atmos implementation.

Sale Price 699
Buy Now
3rd Party 698.99
In Stock.
See what people are saying about this story or others
See Comments in Forum
Previous Next