Overview - If you're looking to upgrade to Dolby Atmos and DTS:X hemispherical surround sound, but don't have much money to invest in speakers, Sony offers a pair of compact and affordable Dolby Atmos-enabled speakers to help you upgrade your audio system, the SS-SCE. Though they don't deliver rich, full-range sound when compared to more expensive models, these tiny sub-$160 ($199 MSRP) speakers convincingly reproduce Atmos overhead immersion for sound effects and movie-music, and are, therefore, recommended for enthusiasts on a tight budget. 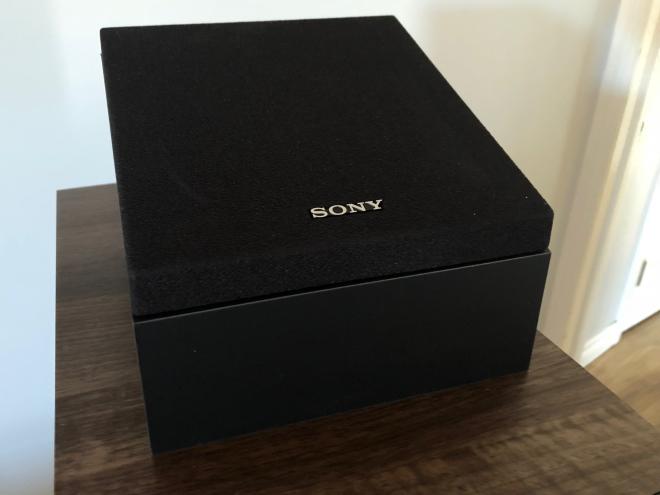 When you go to a cinema, Dolby Atmos utilizes ceiling-mounted speakers to create an overhead dome of hemispherical surround sound immersion. For home entertainment purposes, Dolby realized many potential customers aren't able to install in-ceiling speakers or mount speakers over seating positions. So they teamed up with speaker manufacturers to help them design and sell Dolby Atmos Enabled Speakers like the Sony SS-CSE speakers we're reviewing today.

As one of the first people in the world to experience Dolby Atmos in cinemas and, later, the home, I was initially skeptical about Atmos Enabled speakers, but I have to say they generally work as advertised. Overhead speakers will always be a touch more accurate, mind you, but Atmos Enabled speakers do a nice job of tricking your ears into thinking sounds are coming from over your head.

Sony SS-CSE Dolby Atmos Enabled Speakers are versatile enough to be mounted in two directions. You can set them atop your current speakers or mount them to a wall and, pointed upward, bounce the sound off your ceiling with the help of your AV Receiver's processing. Or you can mount them high on a wall, angled downward, to pipe sound directly at your ears. In my opinion, option two is more akin to using in-ceiling speakers for accuracy, but for those who don't want to drill into walls or see wires running down a wall, the bouncing method works nicely too.

But how do these $160/pair ($199 MSRP) speakers sound and can you actually get good Atmos from such affordable gear? Well, we put these Sony SS-CSE speakers through a myriad of demos and tortures tests and came away with some interesting results. Read on, dear reader, read on! 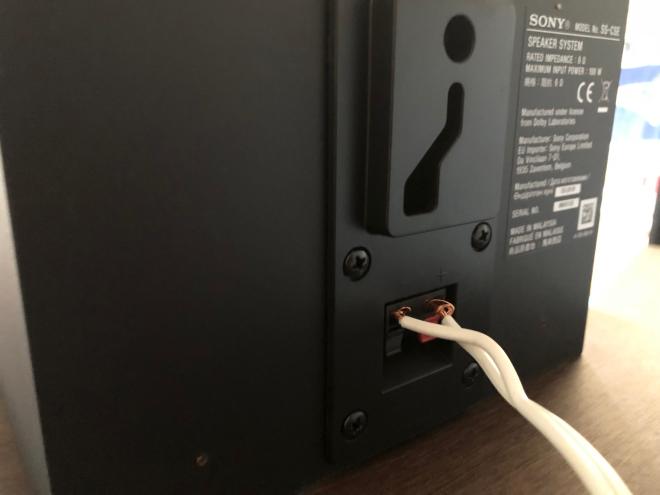 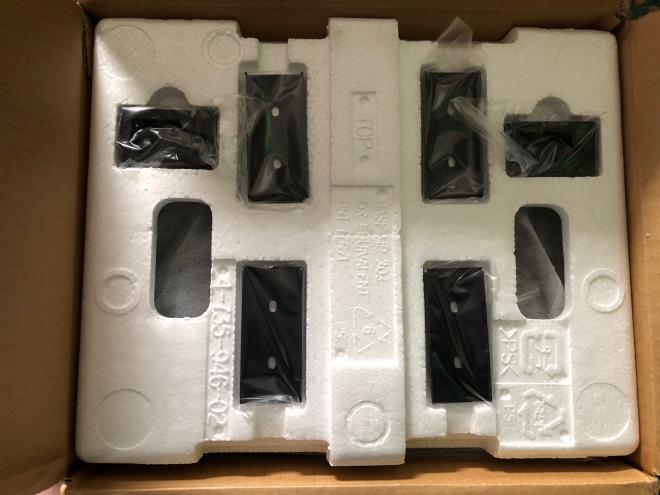 Sony's SS-CSE Dolby Atmos Enabled Speakers are compact and angular with "all-wood" construction and a matte black finish that resembles many home-theater-in-a-box systems. The detachable grille comes draped in an acoustically-transparent black cloth and adorned with a shiny Sony logo. Underneath, you'll see the Mica Reinforced Cellular 3.94" cone, which is apparently more rigid than a paper cone.

Sony SS-CSE Dolby Atmos Enabled Speakers can be set up in two different ways. Option one -- installing as a Dolby Atmos speaker -- includes placing them atop your front right and front left speakers, then running wires (not included) to your AV Reciever or amp's height channel outputs.

Sony has also included brackets so you can physically mount the SS-CSEs to Sony's SS-CS5 and SS-CS3 speakers as well as a screw and wall pad so you can mount the SS-CSE lower on a wall so they're still pointing upwards and bouncing sound.

Or, there's option two, using these as front heigh speakers. Here, using the included brackets, you place each SS-CSE high on a wall and mount the speaker so it's aimed downward to your listeners. You'd then need to run wires down, or in through, your wall to your AV Reciever or amp.

For our review, since we have to return these loaners, I simply set the SS-CSE speakers onto of my Klipsch Reference Premiere RP-8000 towers and called it a day. The only thing I didn't like about this part is the push-type terminals (as I personally use banana plugs), but that's to be expected at this price range. 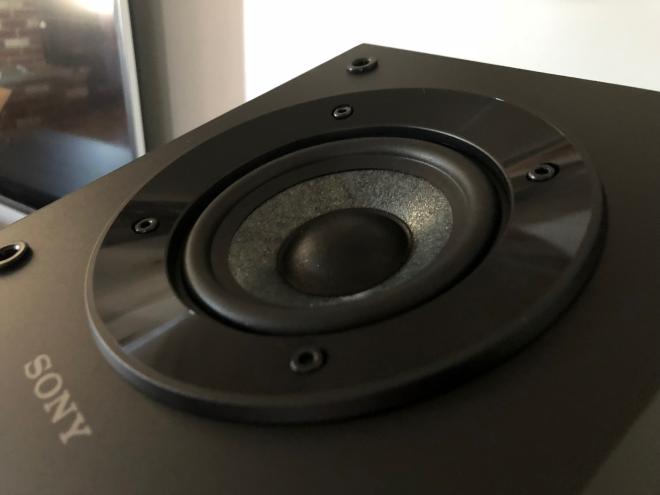 Simple answer: they work! I haven't experienced an issue with any Dolby licensed speakers that fail to deliver overhead sound, and these are no different.

Circling through my go-to Atmos demos -- Mad Max Fury Road, Pacific Rim, Live. Die. Repeat, and so on -- Sony's SS-CSE speakers deliver convincing overhead immersion for score elements and sound effects like rain and gunshots and voices and rotor blades and monster roars. These speakers also do a bang-up job with Dolby Surround and DTS:Neural:X Up-Mixing, tricking your mind into believing there are speakers directly overhead. I even managed to integrate them fairly well with our more-expensive Klipsch Reference Premiere loaners (review coming soon!).

Do they sound as rich and as full as $500 Atmos enabled speakers or $800 in-ceiling speakers? Nope. These Sony speakers don't punch above their weight class, but they do produce convincing immersion as advertised. Given the sub-$160 pricing, though, these are an impressive little set of Atmos speakers for those on a budget. 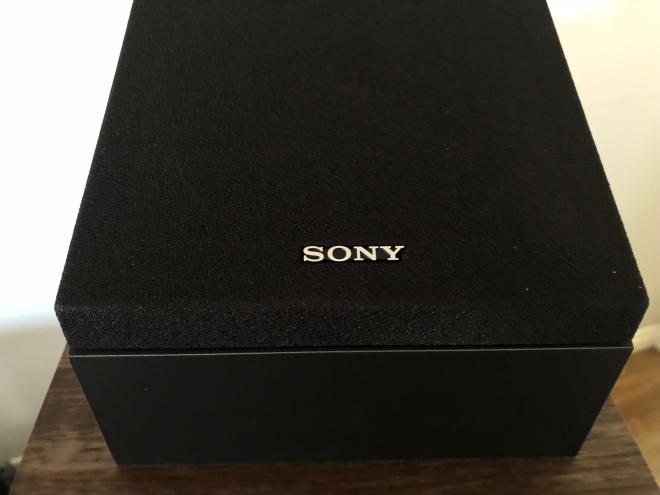 Here's where things take a turn for the worse. While the SS-CSE Dolby Atmos speakers effectively recreate movie sound effects, I always test Dolby Atmos speakers and in-ceiling speakers with other content sources. Overhead Atmos channels are usually left to higher-frequency effects and music (your AV Reciever's crossover settings help send the lower frequencies to your sub), but to really understand a speaker, it helps to play music or wire them as stereo speakers for music and television.

It's a torture test, especially for budget speakers or any speakers that meet the minimum Dolby Atmos specs.

Sony SS-CSE speakers are not good enough to play full-range music, TV, or movie soundtracks. With rock or hip-hop, they sound flat on the low-end and shrill in the high end. This isn't a surprise, given the specs and pricing, but it's worth noting that better Atmos speakers produce more frequencies with more clarity. If you need these speakers just for overhead sounds, they work, but they're pretty limited overall.

If you're in the market for an entry-level budget-friendly pair of Dolby Atmos speakers, the Sony SS-CSE will get the job done. They're about $160 for the pair (at the time of publishing), can be wall or speaker-mounted, and they effectively recreate Dolby Atmos & DTS:X immersion for sound effects like rain, roars, gunshots, and so on. Unfortunately, these speakers don't have enough frequency range for much more, sounding a bit shrill if you play music through them.

In other words, if you have the budget for a $300-500+ pair of Atmos speakers, you'll be better off looking elsewhere. Still, if you need to do Dolby Atmos on a budget, the SS-CSE are recommended.

Sale Price 199.99
List Price 229.99
Buy Now
3rd Party 93.56
In Stock.
See what people are saying about this story or others
See Comments in Forum
Previous Next