Overview -- The Yamaha RX-V685 7.2 channel AV Receiver is capable of Dolby Atmos and DTS:X configurations, along with 4K HDR/Dolby Vision, tons of HDMI inputs, and a variety of wireless streaming options, including Amazon's Alexa. Currently, the receiver is under $500 on Amazon, making it a top-tier mid-range receiver with a plethora of bells and whistles. If you're set on having a 9.1.4 Atmos setup, this receiver won't cut it, however, if the standard 5.1.2 Atmos or 7.1 arrangement works, then this unit is an excellent choice. Highly Recommended!

When choosing which receiver to use to power your components, it can get a bit tedious with all of the slightly different audio options and gimmicks different models claim to have. There are flagships units that cost thousands of dollars, which feature every option under the sun, and then there are the inexpensive models that just barely get the job done on a basic level. Most of us will settle for a middle of the range unit that costs well below a flagship receiver and just a tiny bit more than one of the elementary models.

Yamaha is consistently doing great things with their home audio products, specifically their receivers. I reviewed one of the company's receivers (RX-V683) last year, and while it did some great things, it didn't pack all of the bells and whistles it should have.

Which brings us to Yamaha's new mid-range RX-V685 7.2-Channel Receiver. This 2018 model costs a couple more Benjamins than the 2017 RX-V683, but for that extra cost you'll get several more options to tinker with, making your overall audio and video experience more memorable. 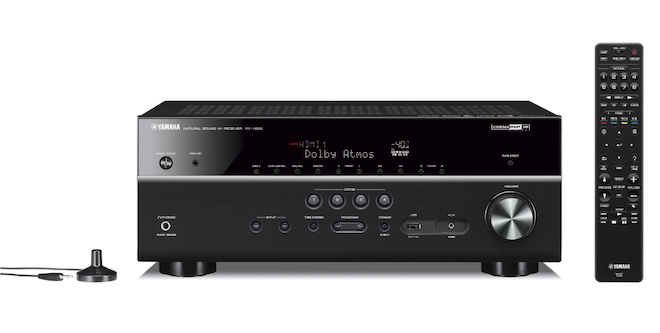 The Yamaha RX-V685 looks a lot like every other Yamaha model, specifically the RX-V683. It's a rectangular metal box that is black in color with a brushed metal look. The display screen is big enough to see from a few feet away and is light blue and red in color. I'm still waiting for someone to come out with a cylinder or even triangular shaped receiver to change it up a bit. There are 21 buttons on the front of the unit, including options for inputs, presets, scenes, tuner and more. I doubt most will use those tiny buttons on the front because the remote is more than capable. There is a giant volume knob on the right side as well, along with one USB port and an AUX port. In addition, a headphones port rests on the left side. The top of the unit is fully ventilated from front to back to keep the cool air circulating.

Meanwhile, the back of the receiver has a ton of connections, including two HDMI outs and 5 HDMI inputs. There are seven different audio options too, which include two optical, two coaxial, and three RCA hookups. There's also a component video option and RCA video option along with AM/FM inputs. Two zone pre-outs and a subwoofer pre-out round out the rear of the receiver, minus the Ethernet port and speaker wire hookups, which add up to nine different speakers. A decent amount of options if I say so myself.

Setting up this receiver is fairly easy because it has an auto-setup and room equalizer that will automatically configure your system given what kind of speakers you have and how large your room is. This process works through an included mic that hooks up to the receiver and collects all of your EQ, speaker, and room size data for the perfect sound, including your sub. Once setup is started, you'll hear a series of noises from each speaker. It all takes a couple of minutes to do. After this, you can choose to adjust each speaker's volume manually if needed... and then you're ready to rock n' roll.

There are fifty-two buttons on the receiver's amazing remote which feels and looks highly expensive. It's heavy and has a rubber feel to it on top and metal feel on the bottom. Each button is easy to feel out and press. Unfortunately, there are no LED lights to brighten up the remote in a dark room.

Lastly, this receiver features Yamaha's famous MusicCast app, meaning you can hook up wireless tablets, phones, and speakers to it and play your favorite music on a variety of platforms including AirPlay and Bluetooth. This receiver also features full 4K UHD video with Dolby Vision and HDR10 pass-through, along with Dolby Atmos, DTS:X and DSP 3D for all your home theater needs. And if that wasn't enough, you can also hook it up to an Amazon Alexa device for voice control, which is quite cool. 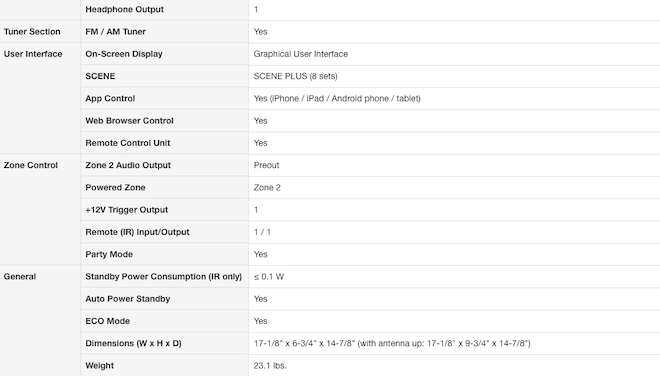 Of course, I had to watch Avengers: Infinity War on this receiver to demo all the glorious sound effects, bass, and explosions that engulf the movie. The Dolby Atmos track does a great job with prioritizing the different channels despite the Disney lower-volume issues. Not sure why Disney hasn’t caught on to this issue yet, but the lower sound is not caused by the receiver itself. Still, once pumped up a bit, the track sounds fantastic through the RX-V685, even if it never quite hits 11 like some other blockbusters.

Instead, this audio mix goes for the quality of each sound rather than just making every effect sound startling. A lot of the film is set on the front three speakers where each effect can be heard distinctly and clearly. It’s phenomenal. However, if you want a ton of height noises or rear speaker effects, this is not the film for that. Don’t get me wrong, those noises still happen, it’s just not that often. With that said, height and surround speakers really engage during the scene where Doctor Strange is fighting Thanos with his multiple visions or when the big battle on Wakanda is in effect, allowing the RX-V685 to produce a sound as dynamic as you’d hope.

The video portion through this receiver in 4K and HDR10 is phenomenal as well. There isn’t a giant difference or upgrade between the 1080p Blu-ray and this Ultra High-Definition Disc, but there are some striking variations in the form of colors and detail. Here on this UHD Disc, the level of detail is more pronounced, even with heavier CGI sequences. The textures, scars and wide facial lines on the face of Thanos look bolder and more pronounced in this image. The blue and red colored costumes on a lot of the superheroes are well defined. The gold and red Iron Man suit shine for sure and the purple face of Thanos sticks out with everything thing else coming across as striking. What the HDR10 does is help the different shading and shadows come forth in numerous lighting conditions and through the smoky debris. It's a fantastic looking image through this Yamaha RX-V685.

After that, I listened to the Big Trouble in Little China soundtrack on vinyl, which is a John Carpenter score and sounds incredible through the unit. We all know that John Carpenter loves to use that synthesizer, which has made a comeback in horror movies as of recent. The lyrics are related to what happens in the film with some fun and quirky deliveries to the chorus. It’s a mix of synth and guitars that are almost hypnotic and has Chinese themes to it. Instead of a ton of classical string instruments, we have rock guitar sounds that bring it to a modern era, specifically the 1980s, which is nostalgic and fun. It’s a memorable song for sure and you’ll catch yourself singing it long after you hear it. The rest of the soundtrack is a big mix of loud guitar chords, riffs along with an eerie and almost western-like synth score. It’s fast-paced again with Eastern themes throughout along with that Western quality. Every synth note and guitar chord comes through cleanly with the perfect amount of bass. It's fluid and smooth on every level.

Another cool option to this receiver is its wireless capability. If you download the easy to use and free MusicCast App on your phone, you can access this receiver and wirelessly play music from a number of apps, such as Spotify and Sirius XM. Not only that, but if you have the new Yamaha MusicCast 50 speaker, which is kind of like an Amazon Alexa without the Alexa part, you can wirelessly play music on it. Listening to the Monk's Dream by Thelonius Monk was simply a pleasure via streaming services with no cutouts or audio issues. All the highs and lows remain intact with each instrument of this jazz maestro.

The scene-memory feature on this RX-V685 is an excellent edition for those who are knee deep in watching movies, listening to music, or watching your favorite sports programs. You can fully customize each video and audio aspect for everything you watch and with one click of the button, choose it when you decide what's on the entertainment menu. It's very easy to use and calibrate.

This receiver comes in at around $600, which is what most people will look to spend on a model in this class. There are a ton of options out there, but this Yamaha RX-V685 is a great choice. For those listening to records or streaming MP3s, the sound this receiver puts out is fantastic and should satisfy you on almost every level. The scene-memory pre-sets, multi-room function, wireless speaker proficiency, Dolby Atmos and Dolby Vision all make this great receiver worth the purchase if you're in the market. Highly Recommended.

Sale Price 799.99
Buy Now
3rd Party 799.99
In stock. Usually ships within 4 to 5 days.
See what people are saying about this story or others
See Comments in Forum
Previous Next