-Remote control not easy to use

Yamaha continues to release all-around diverse and powerful receivers with plenty of inputs, wattage, and audio/video options. With their new 7.2 RX-V683, there is HDR support for customers who have switched to 4K with plenty of input options. Not only that, there are some great audio streaming options available here too. The unit is easy to setup, navigate, and use on an everyday basis. With its relatively inexpensive price-point, this Yamaha RX-V683 is definitely one to consider when purchasing a new audio/video receiver. But why choose this Yamaha, when there are so many choices out there right now? Let me explain below. 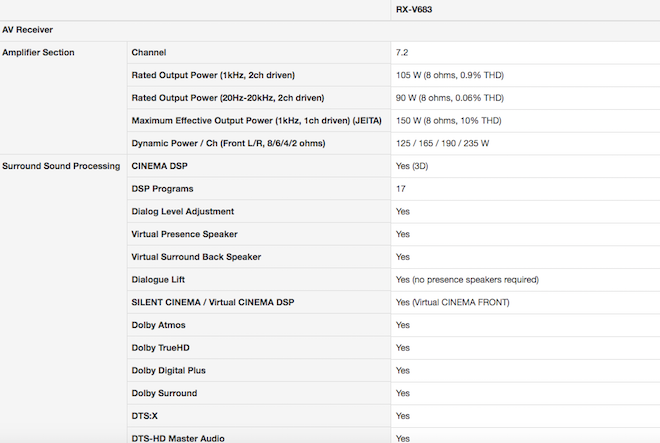 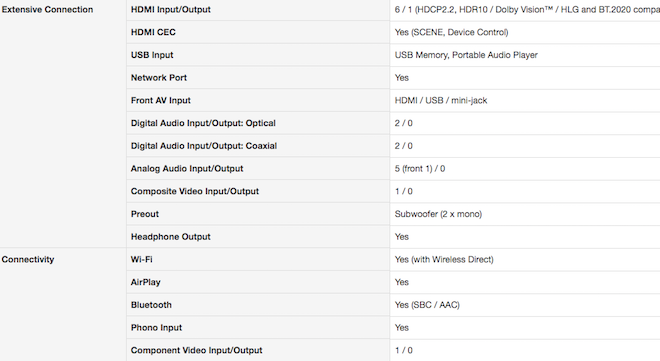 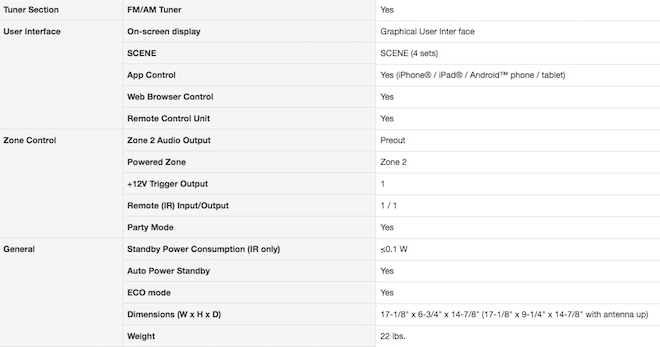 The Yamaha RX-V683 unit looks similar to previous Yamaha models with the bottom half of the receiver having a brushed aluminum look, with its upper half, sporting a big LED screen that is blue in color. The top of the unit is fully ventilated. On the front of the device, there are a whopping 17 buttons, plus a volume knob. Buttons like zone/tone controls, AM/FM, inputs, tuning, presets, and more all have their distinct buttons. It seems like a ton to have on the device itself, but if you're constantly out of the seat or you always seem to misplace your remote control, you'll be able to control the receiver from the unit itself. In addition to the buttons, there are headphones and microphone jacks, a USB input, and an HDMI input, which is great to have when hooking a computer or other device that a friend brought over. There is also an audio AUX input as well, which makes this RX-V683 very handy. The text on the LED screen is in large font and is easy to see in all lighting conditions from a good distance away.

On the rear side of the receiver, you have 9 speaker terminals and your sub-woofer pre-outs. This also comes with 5 additional HDMI inputs along with an ARC HDMI out, meaning you can basically hookup every device to this. There are also 5 audio options, two being coaxial, two being optical, and the last one an RCA. There is also a separate phono section to hook up your turntable. There is also the full RCA video setup along with the almost extinct Component video input. Lastly, there is a 12V trigger out, remote IR input and output, along with the AM/FM hookup. If you're in the 4K business and have a penchant for record albums, this receiver should satisfy you. The remote has 68 buttons on it, which is quite a bit, and frankly, some could be discarded on future units. The remote itself is rather large, but has some heft to it, but doesn't light up in dark settings, which is unfortunate due to the small buttons.

Getting into the software dynamics of the unit, the HDMI supports HDCP 2.2 and 4K video, along with HDR10, Dolby Vision, and Hybrid Log Gamma. If you like being hardwired into your internet service, there is an ethernet port for you as well, but you can connect via WiFi and Bluetooth. If you love using Bluetooth, you'll be able to send any audio to your Bluetooth enabled headphones and speakers. I've also talked about Yamaha's MusicCast in previous articles, which is very easy to use from your mobile devices and allows you to stream audio from any of your MusicCast enabled devices. In addition to that, you can use SiriusXM, Pandora, Spotify, Tidal, along with many others with the RX-V683. If Apple is your brand, you can AirPlay anything to the Yamaha receiver too. Setting up the receiver is super easy, once you plug in your devices and speakers.

Calibration is simple and allows you to adjust volumes and space with the 7-channel setup that boasts 90 watts of power. You can easily choose your intended speaker setup as well, meaning you can choose a 5.1 or a Dolby Atmos setup from the options, and the receiver will take care of the rest. This receiver also comes with Virtual Cinema Front, which allows the receiver to bounce the audio of your walls to mimic surround sound if you only have a couple of speakers or prefer to have your speakers set up all in one place. All of the above mentioned is included in the $599.99 price tag. 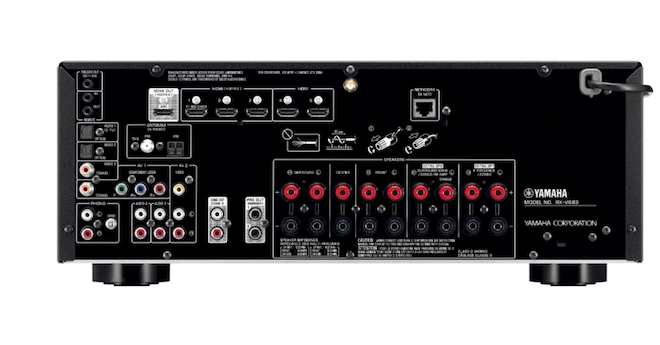 I had to pop in Guardians of the Galaxy Vol. 2 and hear all of the fantastic noises that came from that movie, which came with an impressive Dolby Atmos track, which is a good upgrade from the Blu-ray’s lossless DTS-HD MA 7.1 mix. Those added height speakers truly immerse you in many scenes and sound great. That scene where Yondu and Rocket are walking around the spaceship, where Yondu’s arrow is flying around and killing people is demo-worthy. You’ll be able to hear exactly where the arrow is all over the room, as it zips by every speaker, with whistling, contact on human skin, and other screams and reverbs from being in the large ship. It’s amazing, to say the least. Other big action sequences pack a big punch with laser blasts, takedowns, hits, kicks, and monster roars.

Ambient noises of other people talking and other alien life come through nicely and loud on the rear speakers, providing some excellent depth. The music of the film is magnificent, as it was in the first film, and just rocks the sound system each time one of those iconic 90’s songs plays. That first scene where the Guardians are fighting that giant monster as baby Groot is dancing to music just really nails this Dolby Atmos sound mix. Every nuanced sound effect is perfectly clear. Dialogue is presented cleanly and is always easy to follow. Lastly, the bass and low end of this mix is powerful and will rumble the walls and your bones. Reference-worthy for sure.

Then I had to put on the Baby Driver vinyl soundtrack, which just sounded fantastic. The Bellbottoms song by the Jon Spence Blues Explosion hits all of the right notes with the perfect amount of bass and treble. Those guitar chords really strike deep with each note that sends the reverb into your spine. It was a full, crisp, and clean sound for sure. Even with the distinct echoes of the lyrics here, it all sounded flawless and rich. The bass never crossed into a rocky moment, but was deep and smooth. I loved every bit of it.

I then decided to stream some audio and picked the soundtrack to Beasts of the Southern Wild, because it mixes some great strings, horns, and bass, which I thought was a good test for streaming quality. Needless to say, it sounded full and robust with each New Orleans beat and sound coming through quite nicely. You can calibrate the audio with Yamaha's audio enhancer, which while streaming, boosted the high and low ends enough to make a difference, which I highly recommend doing if you stream music. No audio cut out here at all, but it just raises the bar a bit and has a richer sound to it. 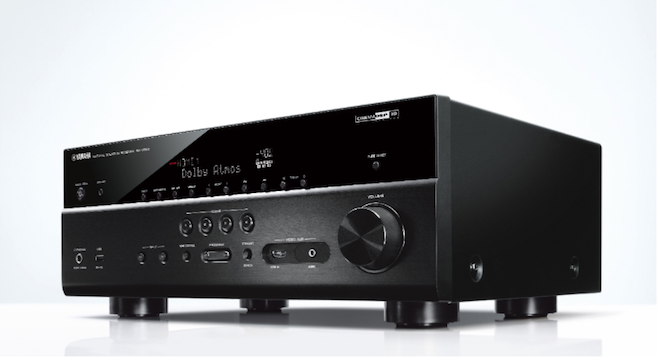 The Yamaha RX-V683 is an excellent receiver that has a lot of bang for your buck. Coming in under $600 (as we write this review), you can hook up virtually almost any source, including 6 HDMI enabled devices. If you have a turntable, no problem, you can hook that up here too along with a smattering of other units. The WiFi is great and the ability to stream audio is easy and one of the best out there with this Yamaha unit. Also, if you have Bluetooth capable devices, you can transmit the audio straight from the receiver to your speakers or headphones. The remote control could have been handled better and has too many buttons and again, the physicality of the unit is still clunky and not as sleek as some of the competition. But it what it lacks in that department, it makes up for in other areas. If you're already in the 4K arena and are looking for a new receiver, but not wanting to spend upwards of $600, then definitely check out this Yamaha RX-V683.