- "Wireless" is actually for Mirroring / Streaming, and doesn't work well with iOS and Mac devices

The new Epson Home Cinema 2150 3LC projector is here and should be a contender when purchasing or upgrading a somewhat entry level projector. I know there are a lot of choices out there when it comes to projectors, but Epson is one of the best bangs for your buck. If you're a gamer or typically love screens larger than the usual 55-to-75 inches, then a projector is right for you, as this particular projector will showcase up to a 300-inch image with no problems. In addition to discussing the features, design, and performance of the unit, I will compare this model to the previously reviewed Epson 2045 model, so you can see if this is a worthy upgrade. 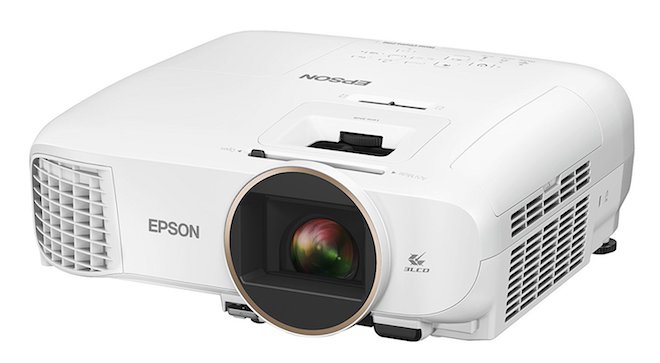 The 2150 weighs 7.7 pounds with measurements of 12.2" x 11.2" x 4.8" (W x D x H) with the feet extended, which makes this a fairly portable unit if you want to bring it to a friend's house. The unit has enough ventilation to keep the unit cool and is very quiet. The smooth rounded edges give it a sleek look with its off-white coloring and copper rim around the lens. There is no lens cap to mess with here, but rather a sliding knob that allows you to open and close the lens on top of the unit. Screen size capabilities range from 30-inches to 300-inches. On top of the unit, you will find home, source, navigation/tilt, menu, ESC, and power buttons. All are labeled and easy to use.

This does have 2500 lumens, which is very bright and can be easily seen in well-lit rooms, or rooms with windows. The contrast ratio is a solid 60,000:1. And this 1080p / 3D projector features a wireless unit so you can connect to the internet. Around back, you'll find 2 HDMI ports, 1 USB port, a VGA computer port, an audio out, and one mini USB port. The projector bulb will last up to 4000 hours in a normal image mode or up to 7500 hours in ECO mode. This also comes with vertical lens shift, which is an excellent feature on this relatively inexpensive unit.

Lastly, the 2150 comes with a 10w mono speaker, in case you don't want to hook up your own external speakers, but I suggest that you do. The remote is thick and smaller than the palm of your hand and has a whopping 37 buttons on it. Anything you'd want to use the projector for, the remote has a specific button for it. Unfortunately, there is no backlighting for this remote, which will leave you stranded or scrambling for your phone to see the buttons.

Setup is very easy. Simply connect your video source(s) in the back, plug the projector in, and jump into the settings to adjust screen size, position, and tilt as needed. You can then select a Picture Mode as well as set up your wireless connection. After that, you're all set to watch your favorite programs.

To be clear, "wireless" refers to streaming videos and photos from mobile devices and PCs; in other words, you still have to run an HDMI cable to the projector's location. Since I'm a Mac user, it was extremely difficult to connect wirelessly to the unit and mirror photos, video, and even the web. It involved downloading the iProjection app, taking a picture of a QR code, and switching networks to the one on the projector. It was a mess. For anyone with a mobile device that supports Miracast, or a Windows 8.x or 10 PC, you should have a much easier time. 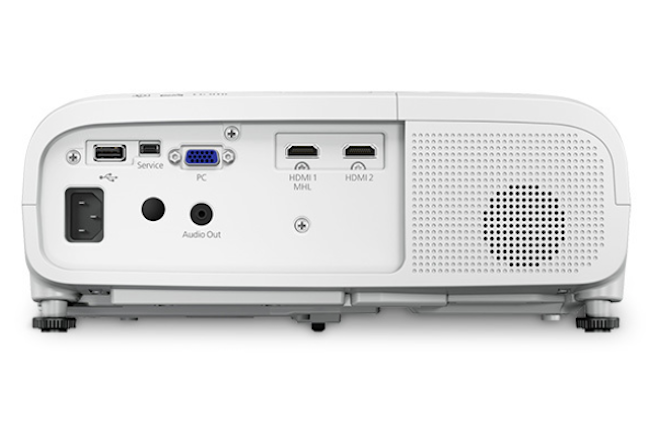 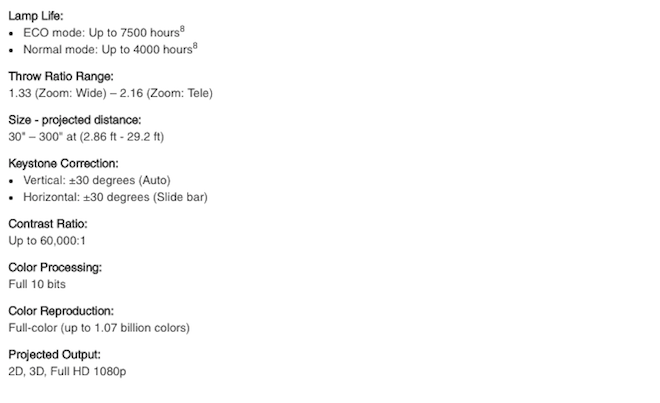 I hooked up the Apple TV 4K to the Epson Home Cinema 2150 and started watching Fate of the Furious. Of course, this video presentation looks phenomenal, as most of the recent Fast and Furious movies from Universal have looked incredible. This one is no different. The color gorgeously pops throughout the film, but perhaps the best examples are during the Cuba scenes where the rich, bright primary and pastel colors on the buildings, cars, and clothing look exquisite in all lighting conditions. The pinks, reds, greens, and blues are amazing in each scene here.

Another color that leaps right out at you is orange, when The Rock and Jason Statham are in the prison jump-suits, which looks stunning in front of the grayish prison walls. The final act is in snowy terrain, but the different shades of white and blue are always excellent. The detail is sharp and vivid too, even in the heavier CGI scenes. Close-ups reveal scars, facial pores, individual hairs, wounds, and makeup blemishes on the actors’s faces nicely, whereas every speck of dirt, scratch, and ding on the vehicles can be seen easily. Wider shots never go soft either. When explosions happen, every piece of debris or ice chunk looks crystal clear. The black levels are deep and inky and the flesh tones were very natural.

I then hooked up my 3D Blu-ray player to check out Mad Max: Fury Road. When dealing with the 3D component usually, the image is a bit darker, and that’s the case here, although it’s just a tiny bit darker than normal. It never really loses any of its detail or clarity at all either, but rather gives the film even more depth that it does in the 2D version, specifically when all of the vehicles are engaged in a race or a chase. The wider shots with tons of CGI look grander here as well, never losing any of the crystal clear detail.

Colors still pop with that orange rust and teal blue tint, but everything is just a shade darker. There are some fun moments where the 3D pops out at you, which is always fun as well. Black levels are still consistently deep and inky and the skin tones are natural. There were no compression problems of any kind either. No matter what the screen size was, there were no pixelation issues, murkiness, or noise on this unit. Colors remained bold and bright, even with the sunshine coming through the windows. I was impressed.

Other random shows such as Transparent and WWE Hell in a Cell 2017 all looked great and smooth as well with no issues to report.

As mentioned above, I was unable to fully test the projector's wireless mirroring capabilities, which requires Miracast on a Windows PC or Android mobile device. If you're into the Apple scene, you're out of luck, which is unfortunate, but not all is lost. After you spend some time networking in, you'll be able to wirelessly showcase your photos, but not videos from your mobile device, use your mobile device as a camera, which shows in real time on the projection screen, as well as show web pages you visit, which had a long lag time. I hope Epson finds a way to make these features work for Apple customers. 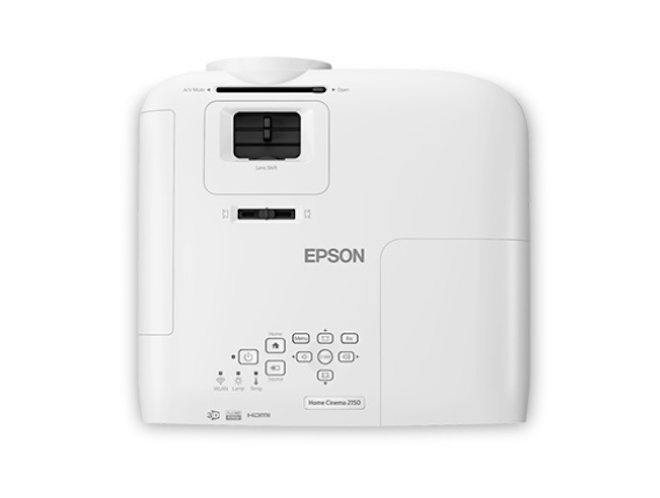 The 2150 unit is the direct upgrade from the 2045 model, but there are some differences to note if you are looking to purchase or upgrade. On the 2150, there are 2500 lumens, whereas the 2045 had 2200 lumens, which makes a bit of difference when there's natural light in your viewing room. The 2150 also drops the RCA inputs, which makes sense. It's a dying format, but it was nice to have it as an option to go retro.

With those above improvements, it seems like a no-brainer that the Epson Home Cinema 2150 is a worthy upgrade and/or first-time purchase for anyone looking for a bright, 3D-capable 1080p HD projector. When projector's come with vertical lens shift, the price usually goes up quite a bit, but here, it's rather inexpensive and a wonderful inclusion. The Epson does a phenomenal job with picture clarity and color on all formats and has packed a decent speaker inside if you're in a smaller viewing room. I just wish Epson would offer more seamless Mac OS and iOS wireless streaming. There is no 4K UHD or HDR in this unit, but if 3D is still your thing, then you're in luck here.

If you're in the market for an affordable HD / 3D projector with a ton of perks, the Epson Home Cinema 2150 Wireless 1080p 3LCD Projector is the way to go. Recommended!

Sale Price 1109
Buy Now
3rd Party 1109
In Stock.
See what people are saying about this story or others
See Comments in Forum
Previous Next