When choosing a home theater projector, there are a variety of models out there in the universe to pick from and tons of options to look out for. 3D capability, number of input sources, brightness, portability, and even wireless connectivity features could all have an impact on determining which home theater projector system works best for you. Luckily for us consumers, there are a ton of choices out there nowadays and everyone is competing on prices, which allows us to, more or less, find the best product for a low price.

That's where Epson enters the picture. Their PowerLite Home Cinema 2045 projector is just top-notch all the way around for what you get. Let's get this out of the way first though. This 2045 model is exactly the same as the 2040 model ($700). The only notable difference is that the 2045 model has Wi-Fi capability and the power to mirror video from your mobile devices -- which is a pretty big deal if you want to mirror your favorite films and television shows off of your smartphone or computer. In addition to that, this 2045 model has 3D capability, a 2,200 lumen rating, and the option for frame interpolation to smooth motion.

This is definitely an upgrade from the previous 2030 model. Not only do you get all of these cool features with the 2045 Home Cinema, but it currently costs only $840.99, making it one of the cheaper projectors on the market with all the primary features you would want. Whether you are a beginner to the whole projector realm or if you're just looking for something new in your living room so the whole family can watch their favorite programming or even play their favorite video games, this PowerLite Home Cinema 2045 projector is as good as it is affordable.

This is not as bright as the previously reviewed Epson PowerLite Home Cinema 1440 projector, however, which had a 4,400 lumen rating -- where this 2045 model has half that at 2,200 lumens. That being said, if you have a medium-sized living room and have a little bit of natural light or even house lighting on, this 2045 model is bright enough to show whatever you're watching with great clarity and fluid motion, even at a screen size of 130 inches. If it is theater dark in the room, the image clarity is perfect all the way up to 250 inches, measured diagonally of course. This product is a great way to watch your favorite shows on Netflix, the latest 3D Blu-rays, or even live streaming content like the upcoming 'Wrestlemania 32.' 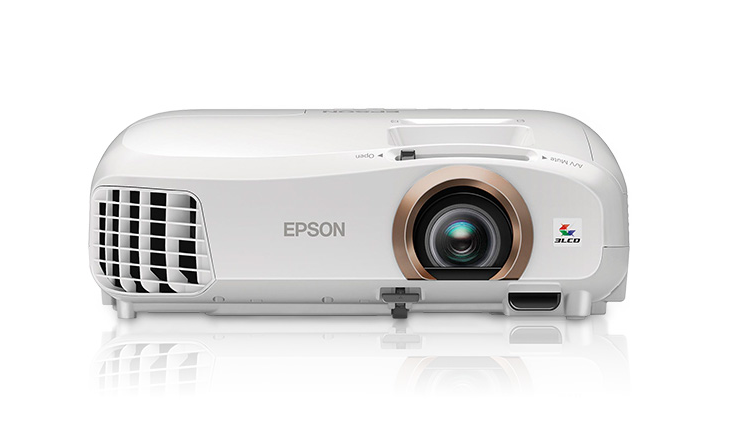 This projector can project a screen size of 50 inches all the way to 300 inches if need be. I set the projector up at 90 inches and at 144 inches in both theater dark settings as well as during the daytime. The images looked crisp and clear in both circumstances, however during the brightest part of the day with all of the windows bringing in tons of natural light, the image didn't look as crisp or clear, but that's the case with almost all projectors that are about 4,000 lumens and under.

I used a Sony BDP-S5100 3D Blu-ray player, an AppleTV, and the Xbox One to test out a variety of movies, television shows, and video games. The projector itself is very portable, meaning you'll be able to transport it easily to a friend's house or outside if you need to. The 2045 model weighs only 6.9 pounds and its measurements are 11.69" x 9.80" x 4.69" (W x D x H). That's a small unit. There are 2 HDMI ports, one of them being MHL ready, meaning you can connect your mobile devices directly to the unit.

There is also an RCA port, an audio out port, a VGA port for your computer, and a USB port in case you want to plug in a flash memory stick. There is manual focus and a 1.2x manual zoom, which allows for some flexibility of your preferred screen size. The remote control is easy to use and controls everything on the projector as well as your Blu-ray player, which is nice. Finally, the unit comes with a helpful installation disc if you need to use one. 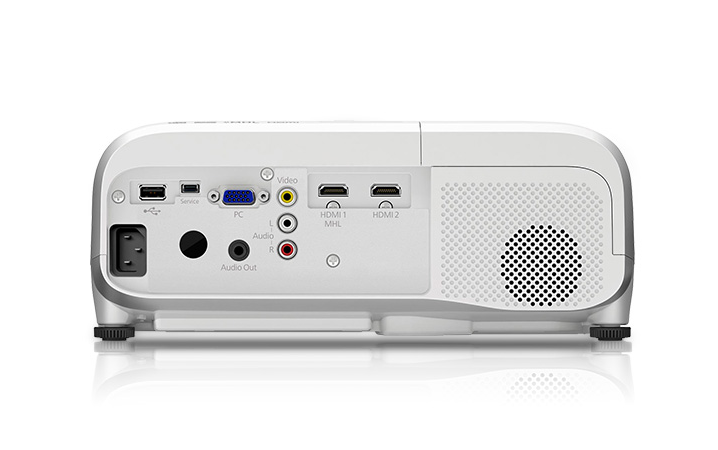 The image looks outstanding. This is a high definition (1920 x 1080) projector that will bring every detail to life, whether you're watching a 50 inch screen size or a 144 inch screen size. For the 3D aspect, the unit comes with a pair of rechargeable 3D glasses, which you can hook up right into the console. I used 'The Walk' in 3D to test this out and it looked fantastic. One of the great things about this 2045 model is that it is completely rainbow free, meaning there are no artifacts. When comparing the 3D to the 2D scenes here, both looked almost identical, and the 3D effect never hindered the clarity or vividness of the picture.

When Joseph Gordon-Levitt is high above New York City on the rope, the depth of field looks amazing. The buildings in the background, the small cars and people on the street, and even the individual hairs on his head look incredible. The 3D here made everything come to full focus and shine. I also watched the newly released 'The Good Dinosaur' from Pixar. The video presentation alone is demo worthy and one of the best I've seen, but on this 2045 projector, it looks phenomenal. The detail of the dinosaurs as well as the human hair on Spot is unbelievably realistic and you're able to make out each individual hair and speck of dirt on his face.

During the busier action sequences, such as a heavy thunderstorm where the wind kicks up dust and the water from the river is going full force, the video never went soft, nor did it get hazy in certain spots. There was some minor video noise that I noticed, but it's nothing to really write home about. The colors were all rich and bold throughout as well and whether it be at the 90 inch screen size or the 144 inch screen size, the detail and clarity never softened or let up.

I also watched a live streaming WWE PPV called 'Fastlane', and the system did a great job of projecting every action packed moment of that event. From the bright flashes to the colorful outfits of the superstar wrestlers, the projector handled everything perfectly. I once again played Halo 5 on this unit and the lag time was significantly reduced from my previously reviewed Epson PowerLite Home Cinema 1440 projector, which had about 85 milliseconds of lag time. This 2045 model has only 28 milliseconds of lag time, which is insanely fast for any projector on the market. If you're not a video-gamer, none of this will really apply to you, but if you enjoy playing games like Halo 5 or first-person shooters, then this lag time will help you out during gameplay and improve your score and rating.

Now let's discuss the Wi-Fi/mirroring option capability. This all sounds awesome in theory, but Epson hasn't quite cracked that code yet in "easy-to-use" or "setup" for Wi-Fi and mirroring. In fact, I couldn't get anything to mirror off this unit, which was very unfortunate. On the other hand, I did get the Wi-Fi to work, but it was tricky to set up. From the menu on the console, you can choose Wi-Fi, which doesn't do anything but search for a connection. You could be there til the year 2020, if you let it.

Instead you will have to install the 'Epson iProjection' app if you want to connect wirelessly, and even then, you won't be able to stream video, but rather just photos or documents. The photos looked excellent and clear, but without the video portion, what can you really do? I was also able to surf the web and look at a few webpages wirelessly, however, when you're scrolling down a page, there is a 2-4 second lag time from your finger to what shows up on the projector screen, which can be annoying. As of right now, Epson's mirror capabilities do NOT support iOS devices, meaning you won't be able to use your iPad or iPhone to mirror your programming. The only thing I could really do on my iPhone was use it as a remote control for the unit, surf the web and look at images - and that's only when you install their app. I have a feeling that when Epson figures out the Wi-Fi realm and adds video to stream wirelessly and mirror, this will be an amazing feature, but unfortunately this cool aspect is lost, due to the difficulty in setup and not being able to stream or mirror video.

Finally, there is a built in 5 watt mono speaker inside the console. This is fine if you're in a small to medium size room, which allows for a good and crisp sound throughout, however if there are large explosions and you have the volume turned all the way up, it can sound like a tin can. My advice is to hook up some external speakers to this unit, because the 5 watt mono speaker doesn't cut it, unless you're watching programs by yourself or one other person. 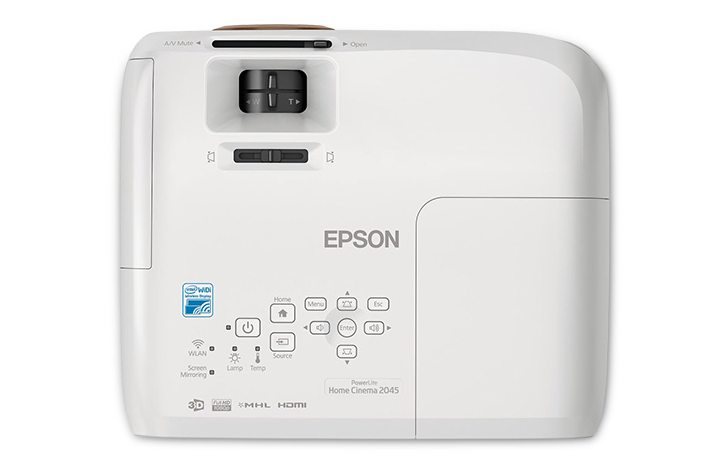 The Epson PowerLite Home Cinema 2045 is an excellent home theater projector. Whether you are new to the whole projector scene or are looking for a new one, this 2045 model is cheaper than most others, and has a variety of cool features, including 3D, Wi-Fi and mirroring capabilities (theoretically), two HDMI ports, the ability to hook up your mobile devices to the console directly, and portability. Likewise, it's 2,200 lumens, making it fairly bright, even during daytime screenings. Sadly, the Wi-Fi and mirroring aspects were either not working properly or fiarly difficult to set up. That all being said, the low price along with the 3D, brightness, and other ports, makes this product is Highly Recommended and perfect for watching 'Wrestlemania 32'!

Sale Price 1261.56
Buy Now
3rd Party 729.91
In Stock.
See what people are saying about this story or others
See Comments in Forum
Previous Next