With the increasing popularity of wireless audio systems and multi-room sound platforms, customers are in no short supply of speaker options for all their household music streaming needs -- finally realizing the dream of enabling a cohesive, connected chain of speakers all around the home.

From Sonos to Denon HEOS to DTS Play-Fi products, there's plenty of brands to choose from -- and now with their WX-010, Yamaha has added another tempting wireless speaker unit to the mix.

Powered by the company's MusicCast system, the compact device features a robust array of wireless connectivity options, enveloping performance, an attractive design, and the ability to easily work with other MusicCast devices. 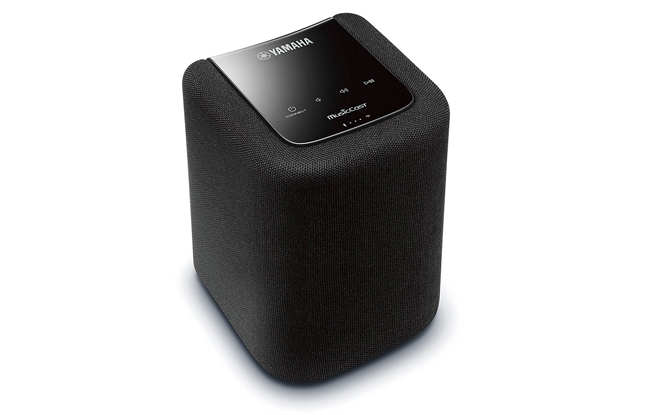 The WX-010 is a single unit 25 watt wireless speaker with a two-way design, a 3-1/2” woofer, 1” tweeter, and two passive radiators. When it comes to aesthetics, the device features a simple yet attractive look with a rectangular shape, rounded corners, a Saran cloth grille covering the drivers, and a black or white finish (the black version was provided for this review). The compact speaker measures 4-3/4” x 6-1/4” x 5-1/8” and weighs just 3.7 pounds, making it a perfect fit for desktops, shelves, tables, and counters.

A touch sensitive panel is located on the top of the unit offers controls for power, playback, and volume, along with indicator lights designating the connectivity status. Though mostly effective, I did encounter a few issues with the touch buttons, resulting in isolated instances of sluggish response, forcing me to press the pause or volume buttons more than once to achieve the desired result. Meanwhile, on the back of the speaker, users will find the power cord, an Ethernet port, and a keyhole slot for wall mounting. Sadly, there are no wired audio inputs. 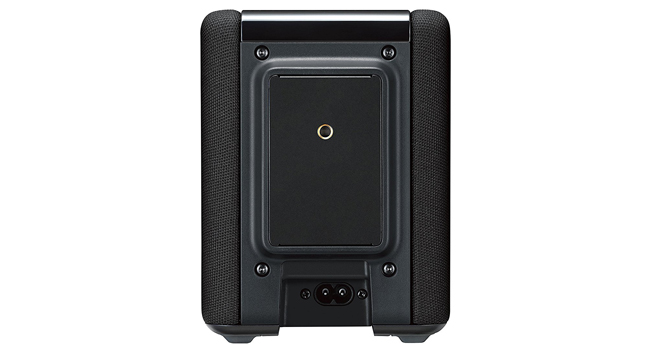 Here's a full rundown of specs from Yamaha:

Designed purely for wireless or Ethernet audio streaming, setup is quite simple and painless. For customers connecting via Bluetooth, plug the unit into a wall outlet, turn it on, locate the speaker on a Bluetooth playback device and… well, that's it!

Meanwhile, those looking to take advantage of the speaker's Wi-Fi playback and multi-room capabilities will need to download the MusicCast app from the Google Play Store or the iTunes app store. Once the app is opened, setup is very straightforward. Wirelessly connect the speaker to a mobile device through Wi-Fi by briefly pressing the connect button on the unit. From there, customers can create a MusicCast location and room on the mobile app, allowing them to wirelessly control the speaker, configure EQ settings, play music stored on their phone, and access Pandora, Spotify, Napster, SiriusXM Internet, and thousands of internet stations. 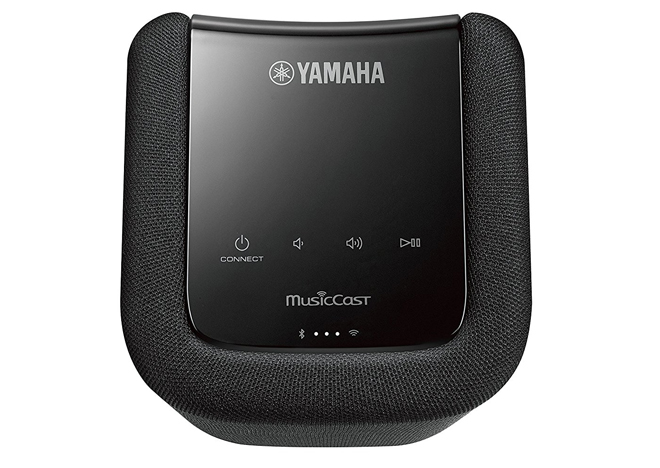 To test the speaker, I primarily sampled a variety of streaming tracks, internet radio stations, MP3s, and FLAC files over Wi-Fi through my Samsung Galaxy S7 smartphone. After a little break-in time, the unit presented an overall pleasing and impressive sonic profile for its class, offering room-filling sound with fairly versatile range -- even if there were some limitations at higher volumes and with certain tracks.

Going through my usual assortment of testing material, the speaker did an admirable job of playing back a wide range of songs from musicians like Radiohead, Gnarls Barkley, Arcade Fire, Arianna Grande, Smashing Pumpkins, Otis Redding, Nicki Minaj, Drake, and Norah Jones. In general, vocals and instrumentals came through with good fidelity, crisp mids, solid highs, and surprisingly deep bass for the speaker's compact size. In fact, the low end actually carried some genuine kick, bringing some noticeable thump to the desk the speaker was sitting atop and even some appreciable vibration in the floor below during particularly aggressive tracks.

That said, while performance was quite full and clean during most tracks, at times it sounded like there was a slight gap between the extreme highs/lows and the midrange, causing transitions between frequencies to drop off a little, lacking the smooth cohesive quality found in larger, more precise speakers.  This was especially notable in hip hop tracks, resulting in vocals that didn't always blend well with the underlying bass beats.

Thankfully, rock, folk, classical, and pop tracks all fared better. Likewise, the tiny speaker was capable of filling a small to medium-sized bedroom with more than enough sound. In general, I was able to keep the volume levels at around 60 to 75 percent in my testing environment and had no need to push any further. It should be noted, however, that larger rooms might require a bit more volume, and though solid, performance did take a hit when approaching 90 to 100 percent power -- resulting in some distortion with a boomier sound and overpowered bass, causing some unwanted cabinet vibrations.

Still, when kept at reasonable levels while playing higher quality material over Wi-Fi, the WX-010 proved to be a very worthy performer. Some styles of music were better suited to the speaker's particular sonics than others, but overall playback was quite enveloping and punchy -- making it a great fit for casual around the house listening. 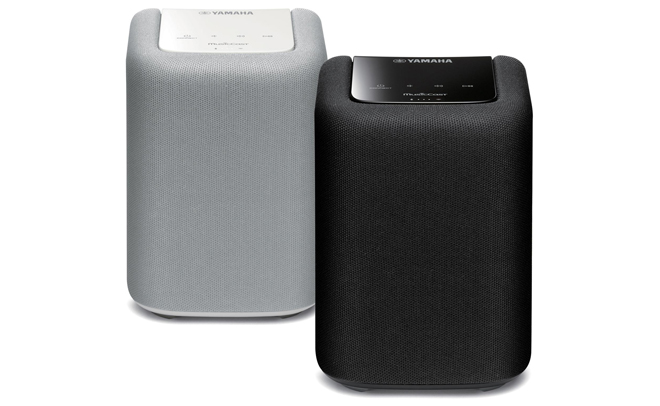 And though I did not have two units on hand to test the stereo mode, I was able to seamlessly link the speaker to another Yamaha MusicCast device, the YSP-2700 soundbar (full review here!). Once linked, I was able to play the same track on both devices in two different rooms with independent volume control. 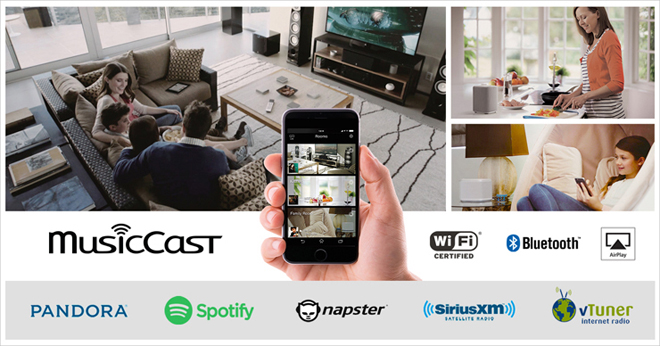 Despite the overall convenience, the Android MusicCast app was a little buggy and unresponsive at times, occasionally presenting syncing issues, dropouts, and delays between commands. Thankfully, these quirks were pretty rare and overall usability was still strong.

Finally, when it comes to standard Bluetooth, performance was exactly as one might expect, though not quite as good as Wi-Fi performance with higher bitrate files.

Despite being yet another entry in the increasingly crowded market of compact wireless speakers, the Yamaha WX-010 manages to leave a rather solid impression thanks to its ease of use, pleasing performance, and extensive MusicCast connectivity options. Though quality does take a slight hit at peak volumes and with certain styles of music, overall quality leans toward the higher end for its class.

And at around $200, the speaker is priced on par with most of its similarly featured competitors. Users looking for a compact audio solution perfect for casual music streaming around the house should definitely consider the WX-010 -- especially if they plan to invest in additional MusicCast products. 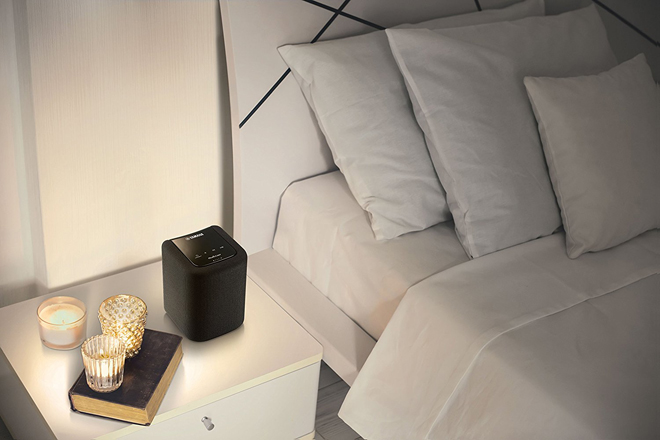