When it comes to buying speakers for a surround sound setup, there's really only one steadfast rule most AV geeks can agree upon: the more the merrier! From standard 5.1 and 7.1 systems to immersive 5.1.2 and 7.1.4 setups, the more speakers you add, the more enveloping and convincing a home theater will be capable of sounding.

There's just one problem. Not everybody has the space or desire for a platoon of seven or more speakers. In many smaller living rooms and apartment setups, some users really only have the capacity for one, making a genuine surround sound experience a little difficult to achieve.

And that's where the Yamaha YSP-2700 MusicCast Soundbar comes in.

Designed to offer a full 7.1 experience from just one sleek soundbar unit and an included wireless subwoofer, the comparatively compact system uses Digital Sound Projector technology to directly aim or bounce audio throughout the room, offering an enticing home theater alternative for AV enthusiasts who are either light on space or looking to streamline their setups.

The YSP-2700 is a 107 watt 7.1 channel soundbar system with a wireless subwoofer. In addition to the speaker and woofer, the package also comes complete with a remote control, an optical digital audio cable, an IntelliBeam microphone (with cardboard stand), and stands to lift the unit if necessary.

From an aesthetic standpoint, the speaker offers a sleek and attractive design with a simple matte black finish. The soundbar measures 37-1/8" x 2" x 6" resulting in a relatively compact form factor that should allow most users to place the unit in front of their displays without any issues. Meanwhile, the subwoofer comes in at 5/8" x 11-3/4" x 12-1/8" making it easy to place to the side of the TV or tuck away in a corner without much hassle.

Under the hood, the system features 16 1-1/8" beam drivers powered by 16 amplifiers covered by a non-removable metal grille. A convenient front panel display is also located toward the right side with information about settings and inputs. Finally, the back of the unit includes a raisable antenna and a nice assortment of connectivity options with support for a plethora of audio formats (all detailed below), including HDCP 2.2 compliant HDMI inputs with 4K HDR passthrough and Dolby TrueHD and DTS-HD MA playback.

Here's a full rundown of specs from Yamaha:

Once unpacked, setup is a quick and painless process. Simply connect the soundbar to a display, plug in any additional playback devices, and turn the unit on. The wireless subwoofer automatically pairs with the speaker and an initial setup screen appears, allowing customers to configure a Wi-Fi connection.

From there, plug in the included IntelliBeam microphone to automatically setup the Digital Sound Projection feature. This tech uses a high-performance processor to precisely control the timing of the unit's 16 digital amplifiers and 16 speakers, resulting in controlled "beams" of sound that can be aimed directly or reflected off of walls to create a discrete 7.1 channel experience.

For best results, Yamaha recommends positioning the soundbar evenly between the adjacent left and right walls and with no objects or furniture obstructing the paths of the sound beams. Anyone who has ever used a similar auto calibration mic will be right at home with this process. After a few test tones and acoustic measurements, the procedure ends, letting users save the results to one of three memory inputs.

For movie testing purposes, I watched a variety of Blu-ray discs and streaming titles, including 'Sully,' 'Deep Water Horizon,' 'Don't Breathe,' 'The Rock,' 'Ouija: Origin of Evil,' 'The Avengers,' 'Inception,' and 'Game of Thrones,' along with several clips from Dolby and DTS demos discs. Throughout it all, the YSP-2700 provided fantastic performance, creating a genuinely enveloping home theater experience that always made it seem as if the room was filled with multiple speakers. In fact, it's easily one of the most impressive soundbars I've come across.

Using Surround Mode, the device properly decoded every audio track (minus Dolby Atmos and DTS:X) that I threw at it, and the Digital Sound Projection technology created a surprisingly convincing sense of surround sound, greatly expanding the audio outward toward the listener. I even walked around the room while watching some material, and could hear how specific effects were bouncing off of different walls.

Crashing debris, exploding pipes, and distant alarms were extended far off to the sides during the aggressive set pieces in 'Deep Water Horizon,' and effects work organically transitioned closer and further away from the viewer when called for. Similarly bombastic scenes in 'The Rock' (including the film's Bay-tastic car chase and climactic shootout) sent revving engines and whizzing bullets bouncing off the walls in my living room. Likewise, episode nine of 'Game of Thrones: The Complete Sixth Season' proved to be great demo material as well, bringing the epic, claustrophobic "Battle of the Bastards" to life with piercing arrows and stampeding horses.

Comparatively restrained tracks, like those used in 'Sully' and 'Don't Breathe,' also demonstrated convincing imaging and directionality with more subtle effects (a dog barking, fluttering birds, passing cars, pedestrian clatter). Dynamic range was also quite pleasing, allowing the movies' delicate moments to build up nicely to more aggressive action scenes. Dialogue was properly centralized, clear, and full-bodied throughout all of the material as well, but there were instances when the calibrated levels for the center channel sounded just a tad too low for my tastes. Thankfully, some adjustments in the settings could easily compensate for this.

When it comes to bass, the included wireless 5.5-inch subwoofer does a very admirable job, producing solid LFE that complements the soundbar nicely without overpowering the system as a whole. I ran through several key sequences that I usually use to test sub performance from films like 'Inception,' 'X-Men: Days of Future Past,' 'The Avengers,' and the Dolby Demo Disc and, thankfully, unwanted rattling or balance issues were essentially non-existent, creating a seamless transition of deep, clean frequencies and LFE cues that never gave away the sub's location. At the same time, however, the woofer never quite packed the full room-shaking punch that a larger unit paired with a multiple-speaker system would. Don't get me wrong, when pumped up in a small to medium apartment setting, the sub and soundbar can definitely get loud enough to annoy the neighbors, but those with bigger entertainment rooms will likely be left wanting a little more oomph.

Likewise, as engaging as the soundbar's versatile and dynamic home theater performance is, the unit's sound beam technology can only go so far in comparison to a true 7.1 system. Channel separation is never as precise or distinct as a multiple speaker setup, but simulated front soundstage expansion and side surround placement really are very impressive. With that said, even at its most engaging, the unit never really makes it sound like effects are actually coming from behind. Instead, it often feels more like the soundstage stops short just slightly in front of the listening position, giving a great sense of imaging between the channels as effects move closer, further away, and to the sides of the viewer, but little sense of genuine rear activity. It should be noted, however, that the shape of my living room isn't exactly ideal for this kind of setup (the left side wall is much further from the TV and soundbar than the right), so users with a more uniform space might get more convincing results. 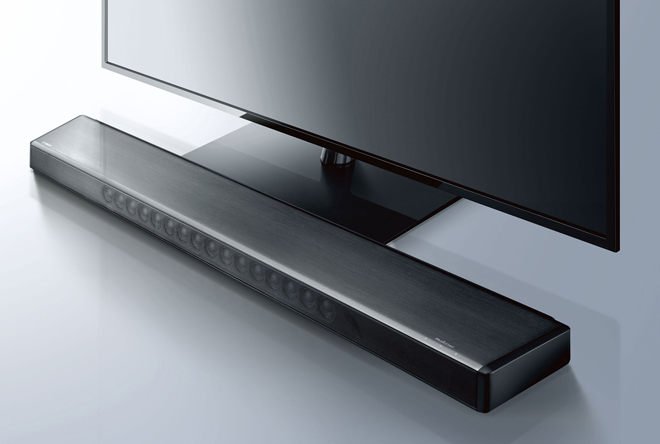 In addition to movies and TV shows, I also sampled the YSP-2700 with a variety of streaming music tracks and MP3 files, including songs from Radiohead, Gnarls Barkley, Ariana Grande, The Beatles, Arcade Fire, Otis Redding, The Smashing Pumpkins, Norah Jones, and the incessantly catchy soundtrack to 'La La Land.'

Much like the film performance, music playback was great, offering a pleasingly balanced sonic profile that avoided any straining in the highs or muddiness in the lows. Likewise, the mid-range was rich and full throughout, bringing nice fidelity to vocal heavy tracks -- though I did notice a hint of sibilance in Jones's 'Don't Know Why.' Low frequencies were also solid, offering some thumping beats in songs like Gnarls Barkley's 'Crazy' and Ariana Grande's 'Focus,' but bassheads who really like to feel each kick in their gut might be a little let down.

And though music separation is very strong when using the surround mode, I was a little disappointed by the speaker's stereo performance. I usually prefer to listen to music in its native two-channel format, but with the YSP-2700 I found the stereo mode to be a little flat with a lack of noticeable left and right separation. Thankfully, switching to surround mode completely alleviated these issues, creating a full and spacious soundstage.

Outside of some small quirks, whether playing music or movies, Yamaha's YSP-2700 offers premium home theater performance for a soundbar of this type. While the unit can't equal an actual 7.1 system when it comes to immersion, the audio quality is quite striking and the Digital Sound Projection tech provides an impressive expansion of the sound field. 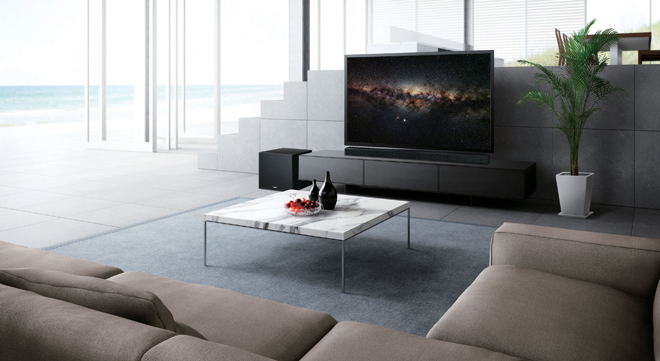 When it comes to standard Bluetooth, performance was exactly as one might expect. I simply located the soundbar on my Samsung Galaxy S7, paired the devices, and started playing MP3 and Spotify tracks from my smartphone. Quality was solid and the tracks came through nicely in the surround mode. 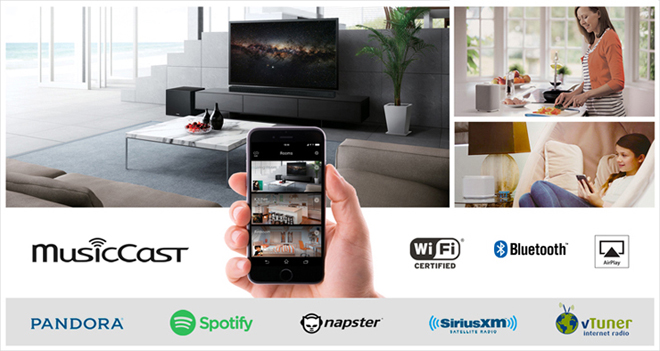 Likewise, initial MusicCast setup was similarly painless, quick, and straightforward. I simply downloaded the MusicCast app from the Google Play Store and then wirelessly connected the device to the smartphone through Wi-Fi by briefly pressing the connect button on the unit. From there, I was able to setup a location and room on the mobile app, allowing me to wirelessly control the soundbar and play music stored on my phone, along with access to Pandora, Spotify, Napster, SiriusXM Internet, and thousands of internet stations.

In addition, I was even able to seamlessly link the soundbar to another Yamaha MusicCast speaker, the WX-010 (full review coming soon!), allowing me to play the same track in two different rooms with independent volume control. With that said, the Android MusicCast app was a little buggy and unresponsive at times, occasionally presenting a connection error when trying to load streaming stations. Thankfully, overall usability was still strong -- even if I did need to restart the app once or twice.

To be honest, I've always been pretty skeptical about soundbars with simulated surround sound channels, and previous models I've heard in the past have often left me rather disappointed. That ends here. The Yamaha YSP-2700 truly delivers on its promise to create a convincing, premium 7.1 channel experience.

Of course, that premium experience does come with a premium price tag. At around $1,200, this is far from a cheap soundbar model, and many users could likely put together a superior 7.1 speaker/receiver setup for less. Likewise, in the age of object-based audio, the system's lack of overhead drivers with Dolby Atmos and DTS:X support is a bummer. And though the soundstage it creates is wide and immersive, genuine rear surround activity is wanting.

Still, when it comes to overall audio quality, multi-room wireless features, connectivity options, and space-saving benefits, this is a fantastic soundbar system. If a true multiple speaker setup is not an option and the lack of overhead audio is not a deal breaker, then the Yamaha YSP-2700 is an impressive single unit (plus subwoofer) alternative to a full-fledged 7.1 home theater rig.

Sale Price 1299.95
Buy Now
3rd Party 1299.95
In Stock.
See what people are saying about this story or others
See Comments in Forum
Previous Next