Not all Bluetooth speakers are created equal. Some are built with portability in mind. Some for in-home use or premium audio quality. And some -- well, some are built like tanks. Designed for more intense outdoor use, these comparatively rugged models aim to deliver wireless audio on-the-go, even in decidedly less hospitable environments.

This leads us to the Turcom AcoustoShock Bluetooth Speaker. With its water-resistant, dust-proof, dirt-proof, and shockproof design, this is one tough mobile audio solution, making it the perfect fit for summer beach days, camping trips, and backyard barbeques. But does this rugged speaker still hold its own when it comes to sound quality? Or does it sacrifice fidelity for durability? And, most important of all, can you sing in the shower with it?!

The Turcom AcoustoShock measures 10" x 3.8" x 4.7" and weighs about 4.06 pounds, giving the unit a sturdy but still relatively portable form factor. Under the hood, the 30-watt speaker features a 2.2 Channel Stereo Sound configuration with two 2" x 2.75" drivers and two 3" x 2" rectangular sub-woofers. An 8,000 mAh lithium ion rechargeable battery is integrated as well, allowing up to 7 hours of continuous music playback. The device uses wireless Bluetooth Version 4.0 and has a connection range of 33 feet. In addition to the speaker itself, the package also includes a power cord, a micro USB cable, and an auxiliary cable.

The AcoustoShock claims to being dust-proof, dirt-proof, and shockproof, allowing it to survive drops and withstand exposure to various elements. In addition, the speaker is IPX5 water resistant with marine equipment grade liquid and solid object protection, letting the unit endure water exposure as long as it is not immersed in liquid.

From an aesthetic perspective, the speaker uses a no-frills black and grey, durable, rubberized casing with an orange accent circling the front drivers and rear woofers. The top of the device features a row of touch sensitive controls for basic functions like Bluetooth pairing, play/pause, forward, reverse, volume up, and volume down. Meanwhile, the right side of the unit houses a power button, an auxiliary input, a DC 18V power connection, and a USB out for charging mobile devices. Finally, the left side includes a button for releasing the speaker's built-in retractable handle. Coupled with the device's other simple yet functionally rugged design choices, this gives the unit a certain throwback feel reminiscent of old-school boomboxes from the 90s. And given its proofing for various elements and drops, the speaker does indeed feel very secure and tough.

To test the Turcom AcoustoShock, I primarily listened to a variety of MP3 files and streamed Spotify music tracks through Bluetooth from my Samsung Galaxy S4 smartphone. And while the speaker is designed with outdoor use in mind, I first sampled the audio quality in an indoor setting to get a good sense for the unit's overall playback performance.

Using my usual assortment of eclectic testing material -- including selections from David Bowie, Gnarls Barkley, AC/DC, Fleet Foxes, Pink Floyd, The Clash, Norah Jones, Arcade Fire, Nicki Minaj, Ariana Grande, Daft Punk, and more -- I sampled the speaker's quality with a variety of musical genres and styles. For the most part, performance was very solid. In general, the unit produced relatively full, clean audio with a rather robust low-end for a speaker of this size and price-range.

Softer rock material tended to sound the best, with the gentle, ethereal sounds of Fleet Foxes coming through with pleasing fidelity. Harder rock tunes from AC/DC also carried nice presence, and hip-hop tracks offered some strong kick. Likewise, the speaker was capable of producing ample volume to fill a small bedroom or even a larger living room without hitting max output. That said, the device's admirable performance was not without some quirks and limitations, especially when playing at higher decibel levels. 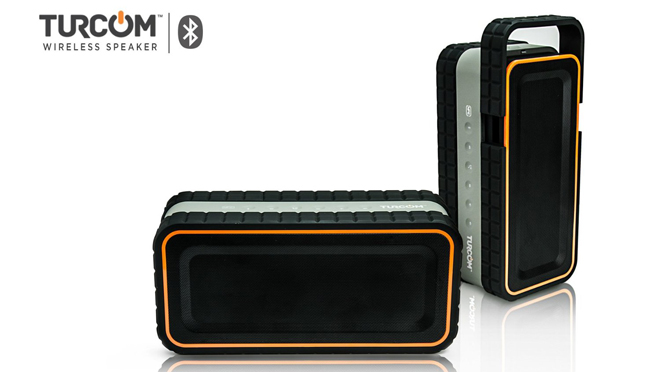 Though mid-range quality was quite good, the Turcom AcoustoShock did have some trouble with extreme highs and lows, displaying some occasional peaks and a slightly echoey quality. Busier tracks had a tendency to sound a little cluttered as well, with lyrics getting lost in instruments. Likewise, some vocals, including those from one of my favorite test tracks -- Norah Jones' "Don't Know Why" -- could get a bit sibilant in the highs. All of these issues varied depending on the content being played, and while they were not very pronounced at lower to moderate volumes (how most will listen to the speaker), they would become more apparent at higher levels.

To this end, when pushing toward max volume, the Turcom AcoustoShock does introduce noticeable distortion, resulting in muddy bass and shrill highs. While most in-door listening areas won't call for such high volume, some larger outdoor locations could necessitate the increase where quality does take a hit. 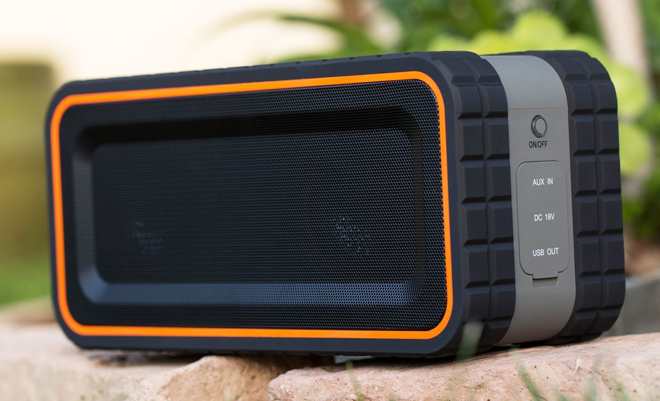 Benchmark established, I took the speaker on a daytrip to Central Park where, after finding a nice breezy spot in the shade, I plopped down and listened to some tracks. Again, audio quality was very solid at medium volume levels but when raising the speaker toward its max, noticeable distortion was introduced. Thankfully, I didn't need such high volume for my peaceful park excursion, and such practice would really only be required for big outdoor parties. The speaker also easily lived up to its rugged design claims, and despite being subject to some dirt and grime the unit played on and felt sturdy as a tank as I journeyed throughout the park.

After getting the speaker a little dirty during our outing, I decided to test the unit's water-resistance by taking a nice cleansing shower. Despite being splashed with flowing water, the speaker played on just as advertised... with one small caveat. Unfortunately, the touch sensitive control buttons proved to be a bit too sensitive, and occasional splashes of water would trigger certain commands, inadvertently skipping tracks, raising volume, and even disconnecting the Bluetooth signal. Thankfully, simply turning the side with the buttons away from the general flow of the water fixed the problem right away -- allowing me to once again sing along to Katy Perry without skipping a beat. Don't judge me. 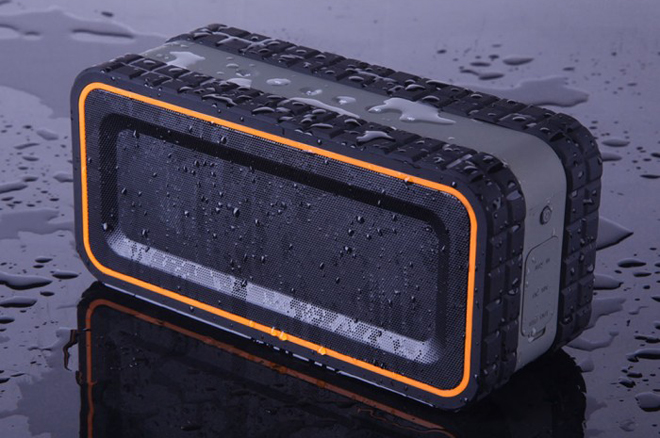 Finally, I also tested the speaker through a wired connection, using the included auxiliary cable to play tracks from my PC. The unit produced similar performance to its wireless playback, offering good audio quality for this price range that only faltered in the extreme frequencies at higher volumes. With that said, unlike some other more compact Bluetooth speakers, the unit's comparatively robust size does make it a little less practical for use as a desktop speaker alternative. And, like most portable units, true stereo separation was essentially nonexistent.

Outside of general wireless and wired playback, the AcoustoShock also includes a few extra features. The most notable is an integrated microphone for hands-free calling. When the device is connected through Bluetooth to a smartphone, customers can use the unit as a speakerphone. In practice this worked fairly well, delivering clear sound when receiving calls from other people. However, my faithful speakerphone guinea pig (hi, Mom!) did complain about the quality of my voice when she heard me through her phone, noting some static and a faintly muffled quality. Moving closer to the device makes the reception a lot clearer.

In addition to the hands-free calling option, the AcoustoShock allows users to recharge their mobile USB devices directly through the unit. Simply connect a phone or tablet with the included USB cable. This does of course drain the speaker's battery, but an emergency call when stranded on a camping trip is probably more important than listening to your Spotify playlist.

Sadly, the speaker does not come with a carrying case and there are no other audio enhancement features, modes, or stereo pairing options, resulting in a very functional but decidedly no-frills package.

With its rugged design and robust kick, the Turcom AcoustoShock is a worthy contender among outdoor Bluetooth speaker models in this price range ($100 currently on Amazon). Resistant to the elements, water, and even a drop here and there, the device is able to keep on playing under conditions where other more delicate models might falter. And despite some issues at higher volumes, overall sound quality is solid.

Customers looking for a more audiophile friendly portable speaker, might be better off with one of RIVA's premium Bluetooth models, but users who want something sturdier for their summer beach trips, hiking excursions, or daily shower ballads, should definitely consider the Turcom AcoustoShock. 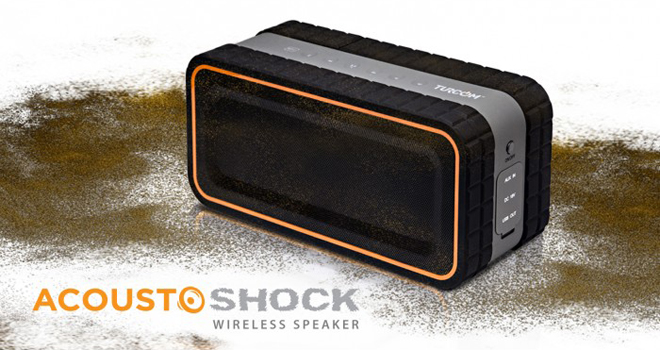 Sale Price 74.99
Buy Now
3rd Party 74.99
In Stock.
See what people are saying about this story or others
See Comments in Forum
Previous Next