Younger siblings are often thought of as nothing more than annoying pests (just ask my older sister) -- but when it comes to Bluetooth speakers, a little brother model can actually be a great addition to the family!

Case in point: the RIVA S.

A smaller version of the company's highly rated RIVA Turbo X, the S packs premium wireless audio into an even more portable form factor. And if that's not enough, the speaker also offers a new TrueWireless mode that lets users pair two units together for genuine stereo sound.

With the same great design on the outside and similar audio tech under the hood, the RIVA S proves that good things can indeed come in small packages.

Much like the previously reviewed Turbo X, the RIVA S comes packaged in a rather handsome box that slides upward to reveal the speaker and accessories. The box includes the speaker itself, a universal power supply, interchangeable plugs for different countries, a 70" 3.5 mm to RCA connector, a 48" 3.5 mm to 3.5 mm connector, and a splash-resistant I/O cover, and a user guide.

The speaker measures 7.5 in (191 mm) L X 2.5 in (64 mm) W X 2.6 in (66 mm) H and weighs 1.5 lb, making it noticeably more compact than the Turbo X. Models are available in black, white/silver, and white/gold. For review purposes, RIVA was nice enough to send a black unit and a white/silver unit. Both versions look beautiful, though I prefer the sleek darker aesthetic. The device features three ADX 40 mm full range proprietary drivers and four ADX custom dual piston bass radiators. Amplification power is rated at 30 watts RMS, and battery life is rated for around 13 hours, depending on volume. Dual noise and echo canceling microphones are integrated as well for speakerphone capabilities, and the Bluetooth range is listed as 33 feet.

On the speaker's back panel, a removable splash resistant I/O cover guards a row of inputs and indictors, including an auxiliary 3.5 input for non-Bluetooth devices, a micro USB data input for software upgrades, a USB charge out connection, a battery On/Off button, a 19V DC power adapter input, and a color-changing battery level indicator.

A glossy top panel houses a series of touch-sensitive controls that can be activated by a simple tap. Power On/Off, Trillium Surround, Input button, Mute, and Volume Down/Up. Once toggled, buttons glow blue and a voice will speak the selection, letting you know a desired feature has been engaged. The panel will even light up if a user merely waves their hand close to the top, making it easy to see the selection icons. Sadly, there is one notable omission on this smaller model: the "Turbo" button and its revving engine sound effect. With that said, users can toggle a similar "Power Mode" for an up to 4dB increase by pressing the input and mute buttons together. Likewise, other modes and options can be toggled through similar button combinations, including a TrueWireless stereo pairing mode and a PartyMode for connecting two Bluetooth devices simultaneously.

The RIVA S manual recommends that users break in the speaker by playing it at 50% volume for 3 hours. Finally, customers with an Android or iOS mobile device can download the RIVA App to enable mobile controls for volume and playback. Unfortunately, my review model was not yet compatible with the Android app, but RIVA now offers a factory firmware upgrade that adds the feature.

For speaker placement, RIVA suggests three primary positions. The corner of the room about 3-6 inches from the wall is listed as the best location, allowing for the speaker to take advantage of the environment's natural acoustics. If that's not an option, placement in front of any solid, reflective surface, or merely toward the center of the room, should work very well too. When the speaker is turned on, it automatically enters pairing mode and will connect with any supported Bluetooth playback device that you choose to pair it with. For the purposes of this review, I primarily listened to audio from my Samsung Galaxy S4 smartphone. Finally, the device supports SBC, AAC, and aptX audio codecs for high quality wireless playback.

Overall audio quality was very strong, offering a rich midrange with similar but not quite as robust performance as the Turbo X. I listened to an eclectic mix of MP3 tracks and Spotify streaming songs, including artists like David Bowie, Arcade Fire, Ariana Grande, Norah Jones, Gnarls Barkley, Fleet Foxes, Daft Punk, Pink Floyd, and Simon and Garfunkel. From soft folk tunes to more thumping pop beats, the RIVA S handled all of the music with pleasing fidelity and a relatively full-bodied and versatile sound -- one that belied its modest stature. With that said, the speaker did have a slightly bright quality and though I no longer have a Turbo X to make direct comparisons to, based on what I remember, the RIVA S seems to lack the comparatively deep low-end found in its bigger brother at higher volumes.

To this end, some tracks did feature a faintly hollow quality in the extremes, a few instrumental cues could come across as a tad harsh in the high frequencies, and I noticed some sibilance in Norah Jones' 'Don't Know Why' with the volume pushed. Likewise, though the unit does a great job of filling smaller rooms with sound, the speaker doesn't quite pack enough power for larger environments. While the bigger Turbo X did a great job in my living room, even when pushed to max volume, I still wanted the RIVA S to go just a bit higher. A "Power Mode" option does increase the volume a little more but it also comes with a 40% hit on battery life.

Of course, given the size and nature of a Bluetooth speaker of this type, certain performance quirks are to be expected -- and as a whole, the unit completely avoids the dreaded metallic or shrill sound found in inferior portable models. In other words, the RIVA S still easily bests most other similar models in this price range, fully earning its status as a genuine "premium" wireless speaker.

Beyond Bluetooth, the RIVA S also offers good wired performance through its included 3.5mm cable. I listened to several more music tracks and watched a variety of streaming shows through my computer while using the speaker -- and the results were great. Range was not as full as on my dedicated Klipsch 2.1 speakers, and stereo separation was essentially nonexistent (though it technically offers a left and right channel the unit is just too small for any real sense of imaging), but the compact speaker provided punchy and crisp audio, making it a solid desktop companion and even a viable stereo speaker alternative for those who need to save space.

In practice, this mode is simply awesome. As impressive as one RIVA S is on its own, the lack of real stereo sound for music does hinder some of its appeal. Likewise, as mentioned before, the speaker does sound a tad underpowered in some settings. But with two units paired together, the TrueWireless mode offers fantastic stereo separation with spacious, room-filling audio. I placed each speaker right on top of my existing home theater left and right front speakers and imaging between both units was fantastic, whether playing music from a wireless or wired source. Pink Floyd's "Money" sounded especially impressive, with the opening cashier sound effects alternating between the left and right channels perfectly, creating a surprisingly immersive listening experience. I encountered a few brief dropouts here and there, but by and large this mode worked exactly as advertised, letting users create a portable wireless system with true stereo sound. 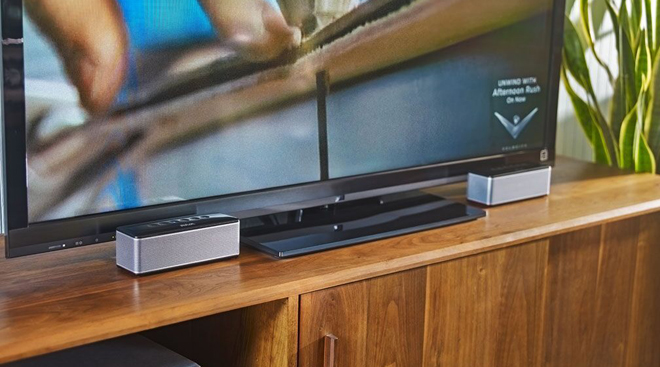 Outside of the unique TrueWireless mode, the RIVA S also includes the company's Trillium Surround mode. This option is designed for use with movies and games and aims to expand the soundfield with greater ambiance. As I noted in my Turbo X review, I toggled this mode on and off several times with a variety of content, and while I did hear slightly more directional separation between effects and a faintly more spacious quality in some instances, for the most part, I didn’t really observe any major advantages or disadvantages.

Also carried over from the Turbo X, the RIVA S includes a speakerphone mode. When paired with your smartphone, the device can be used to receive calls allowing users to hear and talk through the speaker and its built-in microphones. Much like with the Turbo X, this option proved to be a bit uneven. Sound quality from the speaker itself was great, with clean crisp audio -- but my usual speakerphone guinea pig (my Mother), noted an echoey, amplified quality that made it a little hard to hear me.

Finally, the speaker also includes the ability to charge smartphones and tablets through its integrated USB port, making it a useful power supply when on the go. Of course, using this option will drain the speaker's battery life, but sometimes an emergency phone call trumps an impromptu dance party.

Far from a bratty little brother or a spoiled little sister, the RIVA S serves as a great even slightly more sophisticated younger sibling to the beefier Turbo X. Though the unit isn't quite as robust or room-filling as that larger and more expensive model, the speaker does offer great audio quality and an even stronger array of features. And when paired with an additional unit, the TrueWireless mode provides fantastic stereo sound.

For customers looking for a compact Bluetooth speaker that doesn't sacrifice audio quality, this is a very strong option. With that said, the unit is definitely better suited for smaller spaces like bedrooms and kitchens, and though solid, battery life isn't anywhere near as impressive as the 26+ hours achieved by the Turbo X. Likewise, the most impressive feature -- TrueWireless -- requires the purchase of two units, reducing the value here just a tad.

Of course, the speaker's audiophile friendly Bluetooth sound does mostly make up for the comparatively hefty price tag ($250 each or $500 for a TrueWireless stereo pair). And as an added bonus, each RIVA S includes an attractive and functional Ballistic Nylon, Velvet-Lined Carrying Case, allowing customers to transport the speaker in style. Among the best wireless portable speakers that I've heard, whether used solo or especially when used as a TrueWireless duo, the RIVA S is easily recommended.