Optoma has released their 2nd generation short-throw projector with their CinemaX P2 that allows for a large screen size with only being a couple of inches away from the wall. With a new device color and coming in less expensive than its predecessor, this new projector is a great out-of-the-box device that delivers a 4K image with HDR10 and has a better-than-average audio system built-in. While Optoma has changed a few of its internal organs this time around, the price is simply outstanding for all the bells and whistles this beautiful-looking projector comes with. That being said, this is not the ultimate projector for the biggest of cinephiles, but for those looking for a truly remarkable short-throw projector that's easy-to-use, this comes Highly Recommended. 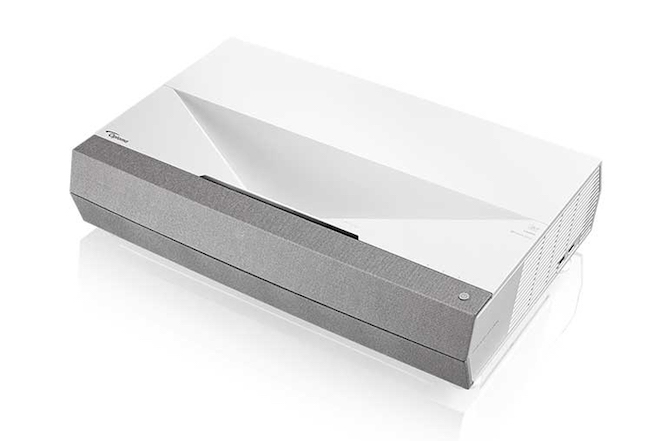 The CinemaX P2 looks virtually the same as the P1, but instead of the piano black coloring, the P2 now has a white outer shell that is sleek that goes with its light-gray grill in the front. The only button on the unit is its power button, along with a few LED lights to let everyone know what's turned on and working. Everything else is handled on the metal backlit remote control, which can be charged via USB. With its impressive audio for a projector, the NuForce soundbar that's built-in comes with two 2-inch full-range aluminum drivers and two 2.75 inch subwoofers with a whopping 40 watts of power, which is excellent for a projector. This means that a separate audio speaker isn't entirely necessary. But for those who want to hook up another subwoofer, one could via the analog audio output in the back of the unit for more power. The image size for this P2 is from 85 inches to 120 inches diagonal in the 16:9 aspect ratio, where only five inches is needed from the projector lens and the wall to achieve maximum screen size.

The P2 comes with a 3,000-lumen rating from its laser engine and has 20,000 hours of life at full power, which means fans of the Lord Of The Rings Trilogy can watch the entire extended cuts in full more than 1,666 times before something needs to be replaced. From the moment the unit is turned on until a movie or live tv program is playing on the screen is about 15 seconds. The cooling fan is super quiet and is not heard at all after the unit is turned off. Another enhancement is the dynamic contrast ratio that went from 1,500,000:1 in the P1 unit to 2,000,000:1 in this P2, making for a better picture, specifically in its black levels and low-lit scenes. 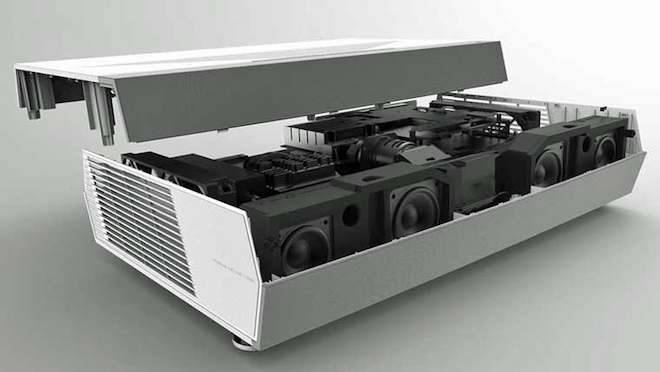 The CinemaX P2 comes with some smart features on its Android-based system and is compatible with Amazon's Alexa and Google Assistant. One could customize the Optoma home-screen by adding apps with the TapCast app that is available on both iOS and Android but is ultimately clunky and difficult to use still to this day. The best way to access apps such as Netflix, Hulu, HBO Max, and Disney + is by hooking up an Apple TV, Roku, or another device to the unit. Since Samsung got into the fine art game with their framed televisions, Optoma has entered that arena with their own Framed platform where the projector's screensaver will showcase a revolving exhibit of fine works of art that is animated. And for gamers, the lag time is now 66ms for both HD and 4K, which is a good improvement from the P1. The P2 also comes 3D-ready for those who are still watching movies with 3D glasses.

Sitting in the back of the unit comes three HDMI inputs, where two are in the rear and one on the side, along with two USB ports, an optical audio output, an ethernet port, and a 3.5mm audio jack output. The remote control is backlit, which comes in handy in dark rooms as well. The setup is easy to use and can be easily calibrated to anyone's liking by pressing a few buttons.

After setting up the P2, a Sony 4K player was hooked up and since Keanu Reeves was on the mind, John Wick 3 was set to play. With the HDR in play, a lot of the film has a cool temperature look with varying shades of blues and silvers, evident of gunmetal. These colors are amplified in different lighting conditions, whether in an antique weapons store or at the Intercontinental hotel. Other colors of praise are inside the ballet theatre with very warm colors of red, yellow, and orange, which signify a former home for John Wick.

When overseas in the desert, some other warmer colors along with muted greens brighten up the screen too. Then, in a climactic battle scene, we get that famous Matrix neon green in the hotel, which is a sight to behold. Black levels are rich and inky with no issues of crush or shadows. You’ll be able to distinguish the darkness of the city alleyways from Wick’s black suit easily. 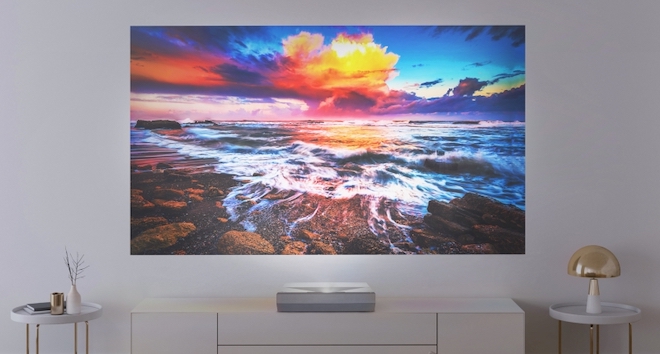 The detail is sharp and vivid in this 4K presentation and on this projector. Individual black hairs on Wick’s beard stand out nicely along with some facial scars and even small wrinkles. The threads in his suit show wonderful textures too. The two fantastic heroic dogs look excellent in the low-lit settings that showcase their fur well. Background items, vehicles, and motorcycles all have that pristine look to them with the right amount of shine, whereas other locations might show wear and tear along with dirt. It’s a phenomenal-looking image.

Also hooking up the Apple TV 4K had some great results with 4K Netflix shows and films, along with watching some of the Star Wars films through Disney Plus. All of the nuanced colors and detail are evident here on this 100-inch screen, which is never pixelated or murky. Gaming on the Xbox Series X was a breeze as well and had reduced lag time, even besting the times from the OLED TV. The sound through all these elements had some great low end of bass and echoed through the room. It didn't even need to be turned up full blast either as most other projectors need.

The one thing that Optoma did this time around though is reducing the brightness to make this second generation model less expensive. So if this unit is in a normal living room with tons of window light coming through, it won't be bright enough to catch every detail on the big screen, but if this is in a media viewing room that is mostly dark or only has a little bit of ambient lighting, this should suffice. Also of note is that for those using Sky Q or another HLG box, the HDR10 will NOT be supported. 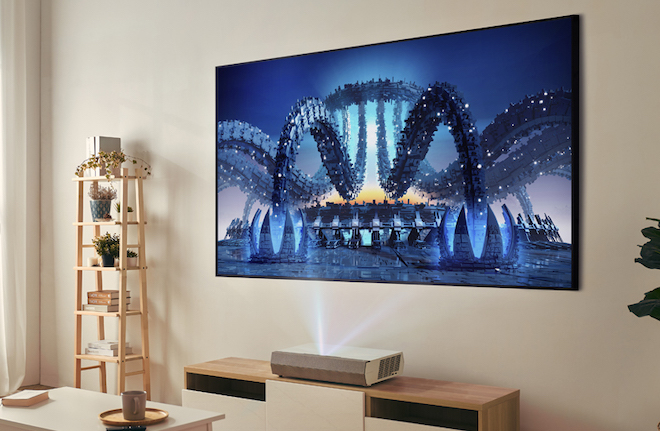 The Optoma CinemaX P2 is considerably less expensive than the P1, by as much as between $500 - $900 depending on where it's coming from. This 2nd generation projector is almost the same as the previous model, so if one has the P1, there isn't a necessary need to upgrade to this one, but for those in the market looking for a projector, especially a short-throw one that allows the device to be only a few inches away from the wall to project a screen size of 100 inches or more than this is a wonderful option. The 4K image looks stunning, the audio output is fantastic, and the bells and whistles are mostly dynamic and easy-to-use. This comes Highly Recommended!