Overview – Serving as Sony's mid-range 2019 4K Blu-ray player, the UBP-X800M2 features the same great video and audio performance specs as the company's more expensive UBP-X1100ES, while excising a few of that model's extra connections and front-panel display. Marked by 4K HDR10 and Dolby Vision playback capabilities, Dolby Atmos and DTS:X bit-streaming, hi-res audio support, Bluetooth, Wi-Fi, and DSEE HX functionality, the device offers a fantastic assortment of features for its price. With that said, like all current Sony 4K Blu-ray players, the unit is prone to a frustrating limitation that requires users to manually activate and deactivate Dolby Vision when playing applicable discs. Still, outside of that one inconvenience, the player is a great buy.

The Sony UBP-X800M2 is actually nearly identical to the step-up UBP-X1100ES 4K Ultra HD Blu-ray player that we previously reviewed. With that in mind, most of David Krauss' detailed impressions apply to this model as well. CLICK HERE to read David's full review.

That said, there a couple of small differences that set the two models apart, particularly when it comes to wired connection options and custom integration features.

Here's a breakdown of the features found on the UBP-X1100ES that are not included on the UBP-X800M2 reviewed here:

Here's a full rundown of specs per Sony:

After booting the player up for the first time, the unit prompts users to select a language and configure an internet connection. Once connected, the player will download any available updates and then restart.

The main menu interface itself is pretty barebones with simple icons for selecting Disc Playback, USB, Media Servers, or Setup. Likewise, a second row of icons for Netflix, Prime Video, and YouTube is included as well. Though a pretty sparse selection, it's still nice to have integrated access to those primary apps.

In general, users connecting the display to a modern 4K HDR display can leave most of these settings on their default selections while making sure that HDR Output is set to Auto. 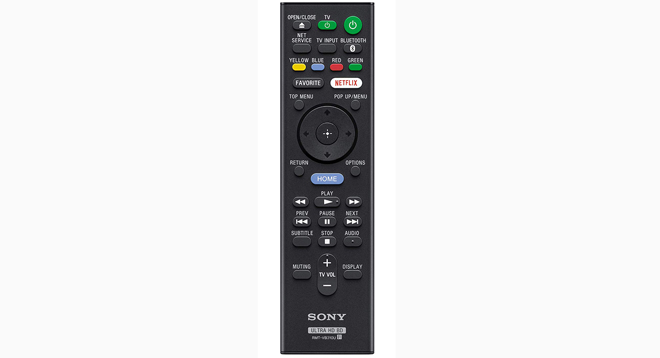 I reached out to Sony to see if there was a specific reason why this design choice had been implemented or if there was a chance it might be adjusted via a future firmware update. This was their response:

"Yes, Dolby Vision can only be turned on and off manually at this time. There is no firmware update planned for the immediate future, however all options are being explored to improve the consumer experience. We're open to your thoughts, and appreciate the feedback!"

Sadly, it doesn't seem like this issue is a top priority for the company, which is a shame, since it's one of the player's only notable drawbacks.

Outside of HDR source details, the Display overlay also offers a host of other useful signal details, including video and audio bitrates, frame rate, and more.

To test the UBP-X800M2's disc playback, I sampled a variety of 4K Ultra HD Blu-ray discs and standard Blu-ray discs, including movies like Shazam!, Blade Runner, The Matrix, Hellboy, The Avengers, Wall-E, and more.

Throughout all my testing, the player properly displayed HDR10 content and bit-streamed Dolby Atmos and DTS:X tracks without any issues. Likewise, Dolby Vision playback came through without any issues (if manually selected for applicable discs). In addition, HD to 4K upscaling was handled well, with great detail and no major artifacts.

Like many Blu-ray players, the device does offer some picture adjustment options when playing SDR and 4K HDR10 (but not Dolby Vision) content. it's usually best to let your display handle these kind of adjustments, though, and instead opt for as pure a signal from your Blu-ray player as possible.

Meanwhile, when it comes to general stability, the player was essentially flawless, offering fast load times, snappy navigation, and near-silent operation. That latter fact was especially welcomed since I've run into some rather noisy disc drive issues on other 4K players from LG.

With that said, as great and problem-free as overall playback and usability was, I did encounter one odd playback quirk. When viewing various grid test patterns on a Spears and Munsil 4K Calibration Disc, I noticed that one vertical column of pixels on the left side of the screen appeared to be cut-off or over-scanned out of view. This was the case on two displays that I tested whether passing the player through a receiver or connecting it directly to each TV. To be clear, the missing column of pixels was indeed visible on the same patterns when playing the disc on an LG 4K player.

I'm not sure what's causing this apparent over-scanning, and I experimented with a variety of different screen format, aspect ratio, and resolution settings in the player's menu and the TVs to see if I could correct it. It's possible I'm just missing an easy solution, but nothing seemed to work. Of course, it's important to note that this is something I would have never noticed outside of a calibration pattern, and the negligible column of pixels that's being cut-off does not result in any kind of noticeable loss of picture when watching actual content. Still, the over-scanning is not ideal.

At $298, Sony's UBP-X800M2 is one of the most fully-featured 4K Blu-ray players in its price range, offering 4K HDR10 and Dolby Vision disc playback, hi-res audio support, and most of the same specs and features found on the company's more expensive UBP-X1100ES model.

In fact, if it wasn't for the irritating manual Dolby Vision issue, this would easily be one of the very best players on the market. As it stands, that's really the only drawback that's holding the player back from a Highly Recommended rating.

For users who don't mind manually activating and deactivating the Dolby Vision setting, however, the UBP-X800M2 is a great buy.

Sale Price 328
Buy Now
3rd Party 328
In Stock.
See what people are saying about this story or others
See Comments in Forum
Previous Next