Overview -- Aimed at fusing wireless convenience with audiophile performance, the Bowers & Wilkins Formation Bar and Formation Bass (sold separately) combine to provide a very enveloping 3.1-channel experience. And beyond playback via optical connection, the units offer multi-room support powered by Mesh Network tech and one-microsecond synchronization for seamless playback and hi-res music support from a variety of sources. But while the system delivers premium sound quality, the package is quite expensive for a sound bar and lacks several home theater-friendly features -- like HDMI, a dedicated remote, and Dolby Atmos support -- incorporated on more affordable options from other brands. Still, actual audio fidelity here blows most less expensive models away, and the unique external design is attractive.

The Formation Bar is a 3-channel single-unit sound bar featuring a total of 9 drivers with 3 x 25mm (1 in) double dome tweeters and 6 x 65 mm (2.6 in) woven glass fibre cone bass/midranges. In addition, the unit features 6 amps rated for 40W, offering a total system output of 240W. Meanwhile, the frequency response is rated for 40Hz to 28kHz. Connectivity options include Wi-Fi, Bluetooth 4.1, Ethernet, AirPlay 2, and Toslink Digital Audio. Up to 96/24 Bit Audio Resolution streaming is supported, along with Dolby Digital playback (though not DTS), and the sound bar is capable of decoding 5.1 tracks and then downsampling them to 3.1.

Sadly, however, video pass-through is not supported and no HDMI connections are included. The company has cited the superior stability and simplicity of Toslink as the reason for the lack of HDMI and, to be honest, I can see where they're coming from. I don't think there's been a single HDMI capable sound bar I've reviewed that didn't present some sort of HDMI handshake or audio sync issue at some point during my testing. With that said, HDMI is still a pretty essential option for home theater users at this stage in the game and I'm a bit disappointed to see it omitted here. 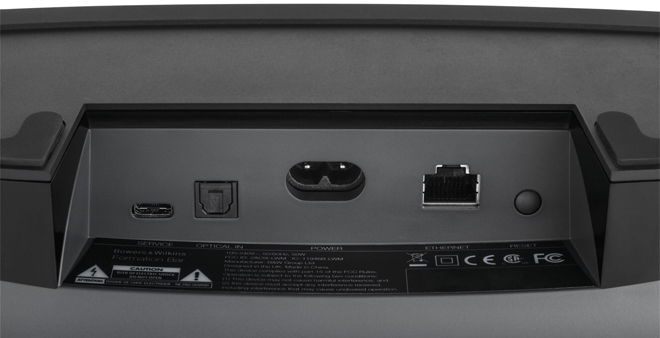 From an aesthetic standpoint, the bar features a unique and rather beautiful design with an elongated cylindrical form, a slightly tapered size toward the ends, and wide diamond patterned shapes across the cloth grill. Buttons for pairing, play/pause, and volume are located on the back of the unit, but they're rather hard to get to. Sadly, a dedicated remote is not included, but customers can use the Bowers & Wilkins mobile app to control the device, and the bar is capable of learning volume and mute commands from a compatible TV remote.

For whatever reason, though, this feature would not work with my Roku TV remote. Thankfully, it did work with my Blu-ray player remote, which then allowed me to adjust the Bar's volume. Unfortunately, there is no on-screen indicator for volume level and while the sound bar's pairing button does glow when the volume is changed, the only way to actually see what level you're at is via the mobile app.

The bar measures 4.3 inches high, 48.8 inches wide, and 4.2 inches deep -- and while that beefier form factor helps to bolster the device's performance, the fairly tall profile makes the unit a bit difficult to place in front of most modern TVs if you're not wall mounting. For this review, I paired the device with a TCL 6-Series 65-inch TV, and the top of the bar did indeed end up blocking a small sliver of the screen.

Designed to be paired with the Formation Bar (and other Formation speakers), the Formation Bass wireless subwoofer (sold separately) features a complementary cylindrical design. The unit houses a 2 x 165mm (6.5 in) long throw bass unit, and is rated for 250W and a frequency response of 20Hz to 150Hz. Offering a comparatively compact form factor for a sub, the device measures 10 inches x 11.1 inches x 10.2 inches.

After unpacking and plugging in both devices, setup is fairly straightforward but you will need to use a mobile device with the Bowers & Wilkins app.

Once the units are powered on, the app will search for compatible Formation models via Bluetooth. Customers can then input Wi-Fi settings for the units to connect to and select a room to group the speakers into. Applicable updates are then downloaded and installed. After that, the Bar and Bass should automatically pair together.

For whatever reason, however, after installing the updates, the app would only recognize the Bar and would not show the Bass as being part of my system. A few resets of the Bass didn't fix the problem, and I ended up having to completely start over by resetting both the Bar and the Bass. Thankfully, this did correct the issue, and my second setup attempt worked just fine.

Outside of enabling users to group speakers into locations, the app also allows customers to adjust the Bar and Bass volume, as well as access separate treble and bass levels for the Bar. Beyond that, however, there are no other audio modes or settings to fiddle with.

Finally, users who connect the Bar to a TV or Blu-ray player via optical should ensure that PCM output is toggled on for any sources sending a DTS signal. Otherwise, audio will not come through.

To test the system's audio performance, I watched and sampled a variety of Blu-ray discs and streaming content via optical connection, including Kong: Skull Island, Inception, Wonder Woman, Transformers: Age of Extinction, The Avengers, The Matrix, Watchmen, Blade Runner, and more.

In general, the Bar and Bass worked together to produce a very engaging 3.1 experience with impressive range, full-bodied and properly centered dialogue, great separation, and intricate texture, providing ample breathing room for delicate nuances and more bombastic effects alike without any balance issues.

Falling rain and little background details were especially pronounced in Blade Runner, allowing me to hear every layer of the mix without losing some of the smaller effects that sometimes get lost on lesser sound bar systems. And while the 3.1 channel presentation could never equal the immersion of a true surround sound or Atmos setup, left and right imaging was impressive throughout the material I demoed with a wide sense of space across the front soundstage.

The No Man's Land scene in Wonder Woman felt particularly alive as the Bar and Bass created wide directionality and a pleasing sense of dimension with clean, cohesive LFE. Likewise, The Battle of New York in The Avengers was also a great showcase for the system, highlighting the Bar's great balance between clear dialogue and hefty explosions.

With that said, the Bass' performance ended up being a bit of a mixed bag. One the one hand, the compact long throw design created a seamless expansion of frequencies from the Bar with none of the unwanted vibrations or distortion that other sound bar subwoofers I've demoed have been prone to. Instead, LFE was remarkably clean and cohesive.

On the other hand, bass felt oddly muted in a few sequences from movies like Inception and Kong: Skull Island that typically carry a bit more oomph on other models. Though it ultimately pairs very well with the Bar, the Bass just isn't big enough to really rival a larger home theater subwoofer experience.

With that said, bass could sound a little more disconnected with music than it did with movies in certain isolated tracks. For example, the steady bass beat in Billie Eilish's Bad Guy sounded a tad unbalanced, resulting in some listening fatigue. Still, the majority of tracks I demoed sounded fantastic.

As a premium 3.1-channel audio solution, the Formation Bar and Formation Bass pair together to deliver fantastic movie performance via optical connection, as well as impressive music playback via wireless streaming.

On the downside, however, the Bar is missing HDMI, there's no dedicated remote, and the unit's large size can make it hard to place in front of most TVs. Likewise, the Bar's lack of surrounds or Atmos support does limit how enveloping the overall experience can be. With that said, Bowers & Wilkins does also offer Formation Flex speakers that can be used as rear satellites to create a complete 5.1 experience -- but that will cost an additional $900 for the pair. And considering the Bar already costs $1,200 and the Bass comes in at another $1,000, that's a rather hefty investment for a system that doesn't include HDMI or Atmos capabilities.

Still, when it comes to pure sound quality and wireless connectivity, the Formation Bar and Formation Bass offer a clear step above many other similar models in this class. While there are less expensive sound bar packages with height channels, included surround satellites, and bigger subs, the actual sonics and styling here just might justify the premium price.

List Price $1199.98
Go To Store
See what people are saying about this story or others
See Comments in Forum
Previous Next