Overview -- The Sony HT-S350 features a 35.5-inch 2-channel sound bar unit with S-Force PRO Front Surround technology and a wireless subwoofer. In addition, the unit offers HDMI ARC, optical, and Bluetooth wireless connectivity, providing a convenient, plug-and-play stereo audio solution. With that said, the package lacks several increasingly common features found on similar competing models, including Wi-Fi, an HDMI video pass-through connection, DTS Virtual:X, and voice control support. Likewise, though overall performance is pretty solid, the device has some balance issues and the unit's LED indicators make it difficult to keep track of what sound mode is activated. As a simple upgrade from built-in TV speakers, the HT-S350 gets the job done, but there are several more robust options available for a similar price. Worth a Look.

The HT-S350 package includes the sound bar unit itself, a wireless subwoofer, an optical cable, and a standard click-button remote control. The remote is surprisingly well hidden within one of the Styrofoam slabs in the box, though, so users should be mindful not to miss it when unpacking and discarding the box.

When it comes to external design, the sound bar features a pretty standard but still pleasing black rectangular form factor with rounded corners and an integrated metal grill mesh concealing the drivers. Touch buttons for power, source, volume, and Bluetooth are included on the top of the unit, and simple LED lights are included on the front panel to indicate settings. A single optical input and an HDMI ARC port are housed on the back. Meanwhile, the wireless subwoofer features a computer tower-style form factor with a 6.30-inch front-facing woofer.

Here's a full rundown of key specs per Sony:

After unpacking the device and plugging in the sound bar and subwoofer, setup really couldn't be more simple. The sub and sound bar unit automatically pair with each other when turned on. From there, wired playback is as easy as connecting an HDMI or Optical cable to a TV's corresponding port. If using HDMI, the ARC setting must be turned on in the display as well.

And… that's basically it. With that said, since the sound bar only supports Dolby Digital and PCM, users will have to make sure that output for any DTS sources is set to PCM. Otherwise, audio will not come through.

When it comes to audio settings, the unit includes a variety of different sound modes designed to better suit certain types of content, including Auto Sound, Cinema, Music, Game, News, Sports, and Standard. Likewise, a Night Mode can be toggled for quiet listening and Voice Mode can be activated to make dialogue easier to hear.

In general, I preferred to listen to movies and TV shows using the Cinema mode which engages the system's S-Force PRO Front Surround virtualization tech. Meanwhile, as one might expect, music playback came through best while using the Music mode. For most content, the default subwoofer level was also sufficient, though the device does give users 12 levels of adjustment.

Unfortunately, however, it's rather difficult to see what volume the sound bar or subwoofer is being set to, as the simple flashing LED indicator lights don't offer much detail. And though the LEDs also flash to signify different mode choices, it's hard to keep track of what these flashes are supposed to specifically indicate. Accidental button presses happen from time to time, and I often found myself unsure what mode the sound bar was in. As it stands, a more detailed row of indicator lights or a text LED would have been much more helpful.

To test out the HT-S350's home theater performance, I watched and sampled a variety of Blu-ray discs and streaming titles, including movies and shows like Hellboy, Godzilla: King of the Monsters, Wonder Woman, The Matrix, The Boys, Shameless, Cobra Kai, The Mighty Gemstones, Riverdale, and The Good Place.

As a whole, I found playback to be quite solid, though there were a few issues that held back overall performance in certain instances. 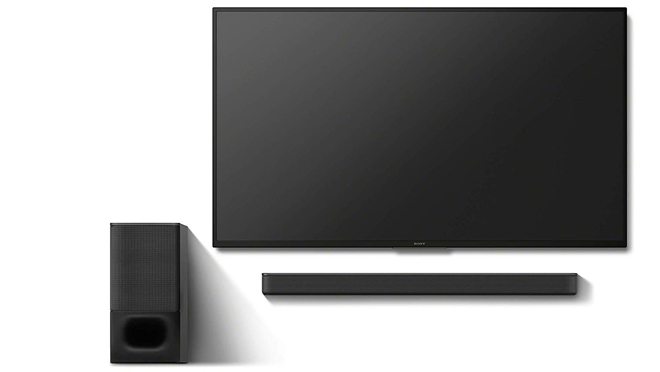 Using the Cinema mode, stereo imaging was actually surprisingly wide with a nice sense of space to the left and right that seemed to extend much further out than the unit itself. Likewise, dynamics were also strong for a 2-channel model of this size, and the subwoofer produced some decent oomph.

Music soared nicely as bullets whizzed by in the No Man's Land scene from Wonder Woman, and explosions carried a hefty kick during action sequences in The Matrix. With that said, the sound bar did suffer from some intermittent balance issues, causing more aggressive effects to overpower other elements of certain tracks.

Dialogue, in particular, often sounded too low and a tad muddy, causing certain lines to get lost in the shuffle in movies like Hellboy. Don't get me wrong, the sound bar still provided solid playback for most content, but the balance between delicate and bombastic effects just wasn't as nuanced and cohesive as it has been on some other competing systems I've tested. The lack of a dedicated center channel might be partly to blame for this drawback.

In general, the HT-S350's S-Force PRO Front Surround tech and subwoofer did a great job of bringing ample heft to movies, especially for a 2-channel sound bar, but this kick was frequently at the expense of more finely-tuned texture. 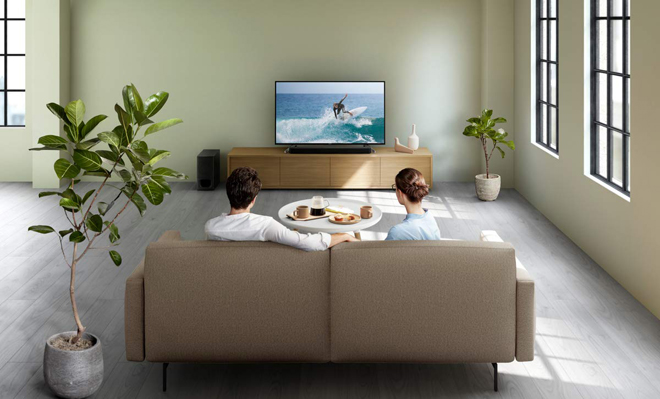 Finally, outside of movies and TV shows, music playback via Bluetooth from my smartphone was quite solid. Tracks from artists like Radiohead, Norah Jones, Billie Eilish, Pink Floyd, The National, and Nicki Minaj all came through with pleasing range, nice stereo separation, and decent bass. With that said, vocals could sound a little bright and the sound bar's relatively small size did limit the system's sense of space in Music mode.

As a straightforward, plug-and-play upgrade to a user's built-in TV speakers, the Sony HT-S350 offers solid 2.1-channel movie and music performance. The virtual surround sound tech does a decent job of expanding the soundfield and the subwoofer offers some welcomed kick in action sequences.

With that said, the system can sound a little unbalanced, with slightly muddy dialogue reproduction that can get overpowered by more aggressive effects. Likewise, the unit lacks a lot of features found on competing models like Wi-Fi, video pass-through, voice control, and DTS support. And though it gets the job done, the LED indicator makes it hard to determine what volume the unit is set at or what mode is being activated.

Overall audio performance is fairly solid, but at a current price of $278, the HT-S350 is just a bit too expensive to fully recommend against similarly priced options with more features from companies like VIZIO and Yamaha.

Sale Price 278
Buy Now
3rd Party 278
In Stock.
See what people are saying about this story or others
See Comments in Forum
Previous Next