Overview -- Bridging the gap between a conventional projector and a traditional smart TV, the Epson LS500 Laser Projection TV couples an ultra-short throw projector with a special ambient light-rejecting screen -- offering a living room friendly 120-inch viewing experience. In addition, the system supports 4K HDR10 playback, along with Android TV streaming and Google Assistant voice control. With that said, the projector lacks P3 wide color gamut capabilities, and despite the impressive lumen output and special screen, a regular LCD TV still has an edge when it comes to performance in a bright room. But despite those limitations, the LS500 should still be an appealing option for more casual viewers who want a giant-screen projector experience in a more convenient package.

As consumers continue to embrace larger screen sizes, TV manufacturers have started to offer bigger display options. But while LCDs exceeding 75-inches are becoming more common, projectors still remain the most cost effective way to get the biggest viewing experience possible. The only problem? A typical projector setup is usually a lot less "living room friendly" than a conventional smart TV.

And that's where Laser TV systems like the new Epson LS500 come in. Bundling a bright ultra-short throw projector with an ambient-light rejecting screen, the LS500 aims to simplify projector setup while offering picture performance more suitable for a brighter environment.

The Epson Home Cinema LS500 Laser Projection TV system features an ultra-short throw laser projector and a 100-inch or 120-inch ambient light rejecting screen with unique optical layering technology. In addition, the projector's 3LCD, 3-chip design is able to parallel process millions of pixels in order to achieve a higher effective resolution. And though the resulting image is not technically true 4K Ultra HD, projectors with this ability still offer an improvement over Full HD.

Beyond 4K support, the LS500 also offers HDR10 playback with Rec. 709 color gamut coverage, up to 4,000 lumens of brightness, full 10-bit HDR color processing, and real-time 12-bit analog-to-digital video processing. Likewise, the projector is capable of achieving a Dynamic Contrast Ratio of more than 2,500,000:1 via advanced black density control. According to Epson, this tech "individually pulses the laser light emitting from the Epson Dynamic Laser Array diodes to precisely suppress stray light within the signal."

Under the hood, the LS500 is powered by the Android TV OS with access to a variety of streaming apps, including Netflix, HBO, YouTube, and more. A voice remote with integrated Google Assistant support is included as well. And when it comes to connectivity, the unit features full 18 Gbps HDMI 2.0 with ARC. With that said, despite the "TV" designation, the projector does not incorporate a built-in tuner.

To demo the LS500 Laster Projection TV, Epson had the projector and 120-inch screen set up in a living room setting with a moderate amount of ambient light. The projector itself was placed on a table about 20-inches away from the screen. Though the screen was positioned on a stand (not included) for the demo, the system is meant to be wall-mounted. The demonstration included a reel of 4K HDR scenery and samples of broadcast quality HD material, giving viewers an idea of the system's high dynamic range performance and more casual viewing performance. 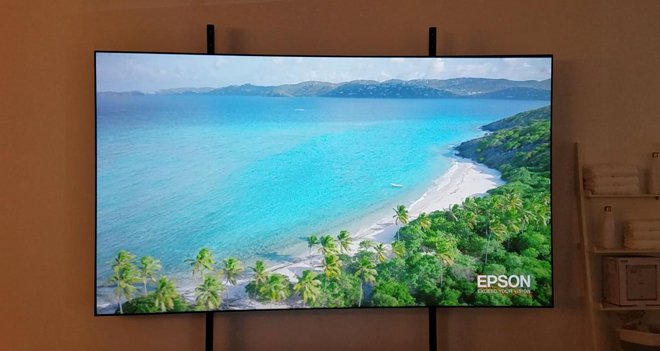 The HDR reel consisted of various scenes of nature and architecture with mountains, beaches, and various structures. Detail was pleasing, bringing out fine textures in buildings, individual blades of grass, grains of sand, and ripples in water without any noticeable artifacts or uniformity issues. Colors also looked fairly punchy and vibrant, especially primaries which popped nicely despite the ambient light in the room and the Rec. 709 limitations. Likewise, the sheer scope of the 120-inch screen size resulted in a wonderful sense of immersion -- easily besting a traditional size TV. 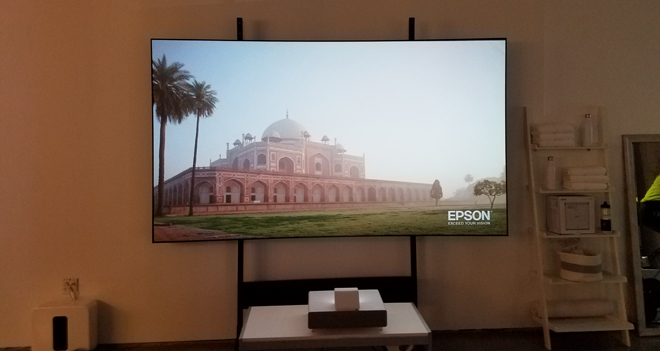 With that said, as impressive as overall contrast was for a projector in a lighter environment, contrast still took a bigger hit than a conventional LCD or OLED TV would take under similar lighting conditions. At the same time, the benefits of the projector's advanced black density control were not immediately clear in the demo environment. It's likely, however, that a darker home theater setting would provide a better showcase for this feature.

Switching gears to HD broadcast material, Epson demoed footage from a football game. While there was a clear dip in quality, the footage still held up rather nicely on the 120-inch screen, giving the game a more enveloping presence. Outside of some minor artifacts visible around text and logos, the image was clean and crisp and colors were solid. 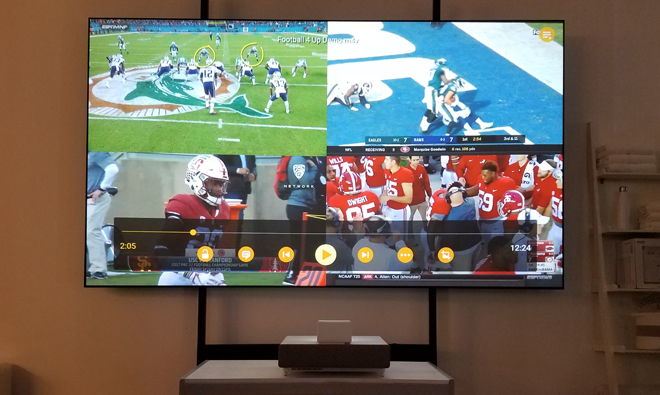 Compared to other Laser TV models with similar specs from companies like Hisense, the LS500 appeared to produce a very comparable image, offering a more convenient, living room friendly alternative to a traditional projector and a more budget-friendly alternative to a similarly sized LCD. At the same time, though, despite the specially designed screen and high brightness performance, overall contrast still looked a little faded in the demo room.

Designed to serve as a kind of middle-ground between a conventional projector setup and a smart TV, the Epson LS500 Laser Projection TV seems to be going after customers who want a giant projector experience in a more living room friendly package. And in that sense, the system does a solid job. Considering the amount of ambient light featured during the demo, the projector looked quite nice with strong detail, pleasing color, and good contrast.

With that said, despite the clear size benefit and impressive ambient light rejecting screen, the system's HDR brightness performance still did not appear to be on par with mid-range LCDs, leading to a slightly washed-out look. Likewise, the lack of P3 wide color gamut support further limits the benefits of the LS500's HDR playback. A darker environment might reveal more of the unit's dynamic contrast benefits, but based on the demo, discerning home theater viewers will likely be better off sacrificing screen size for a traditional TV, or eschewing convenience for a wide color gamut projector model without short-throw capabilities.

We'll need more time with the projector to form a full opinion, but based on our initial demo, the LS500 should primarily appeal to more casual viewers who want a giant-screen projector experience in a more convenient package.