Overview -- Featuring an IPS panel with full array local dimming, strong off-angle performance, HDMI 2.1 capabilities, wide color gamut playback, and support for HDR10, Dolby Vision, HLG, and Technicolor Advanced HDR formats, LG's new 65-inch SM9500 NanoCell 4K TV is poised to become a solid contender among 2019's crop of LCD displays. With that said, we'll need more time with the TV to really determine how well its local dimming and contrast capabilities stack up during dark room viewing conditions. Based on what we've seen so far, however, this looks like a good option for users who want a well-rounded living room LCD with bright HDR picture and impressive viewing angles.

High-Def Digest was recently invited to attend a special demo event for LG's new 2019 4K TV lineup. As part of the showcase, we got to go hands-on with the SM9500 65-Inch NanoCell 4K Ultra HD TV, offering an extended look at the display's features, along with a side-by-side comparison to a competing TV model.

Though a complete in-depth review will have to wait until we can get a bit more time with the display, we're back with some initial impressions based on what we've been able to see so far.

And while we still have some questions about how well the TV will perform in critical home theater viewing conditions, the SM9500 looks like it will be a worthy option for users who want LCD brightness capbailities without losing wide viewing angle support.

The 65-inch SM9500 features a 4K Ultra HD IPS LCD panel with support for Dolby Vision, HDR10, HLG, and Technocolor Advanced, along with wide color gamut coverage (at least 90% P3) via the display's NanoCell technology. In addition, the set includes full array local dimming support, but an exact number of zones is not specified. Likewise, LG has refrained from sharing specific specs for the TV's peak brightness capabilities, but the company did confirm that the panel is capable of hitting over 1,000 nits.

Under the hood, the display is powered by LG's α7 Gen 2 Intelligent TV Processor with deep learning algorithm, allowing the TV to optimize picture and sound quality based on the source content being played. And beyond video, the TV also includes Dolby Atmos support and the ability to up-mix two-channel audio to virtual 5.1 surround sound via the TV's integrated speaker system. 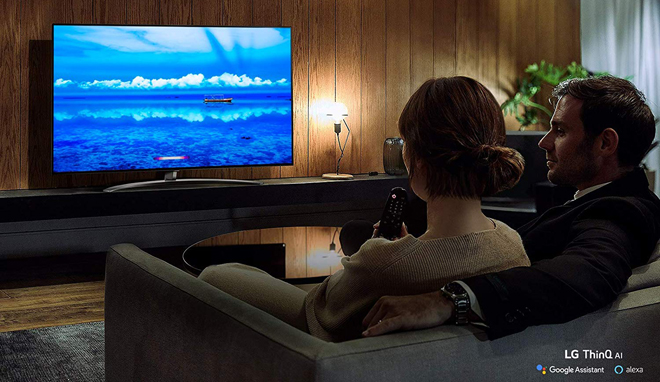 Meanwhile, when it comes to AI services and smart TV functionality, the SM9500 uses LG's ThinQ and webOS platform with access to a variety of apps, along with built-in Google Assistant functionality and newly added support for Amazon Alexa. A Magic Remote is included as well with support for navigation by pointing and tilting the controller at the screen, as well as voice commands.

To highlight the SM9500's performance features, LG presented a series of demos pitting the display against a 2018 Samsung 65-inch Q8 QLED TV. For demonstration purposes, both TVs were presented in either their default Standard or default Cinema modes.

For the first head-to-head demo, LG focused on how well the SM9500 performs right out of the box using a clip featuring mountains and lakes. Many displays have a lot of unnecessary processing triggered on by default which can introduce unwanted artifacts to the picture -- but in its standard mode, the NanoCell display looked surprisingly natural.

In contrast, the Samsung model offered a noticeably harsh look with visible edge-enhancement giving the scene an electronic appearance. And though overall color was solid on both panels, the LG TV seemed to carry a bit more depth in its default settings. Of course, the artifacts present on the Samsung could have been easily removed by adjusting the picture settings, but it is nice to see that LG is embracing a less processed look right out of the box. 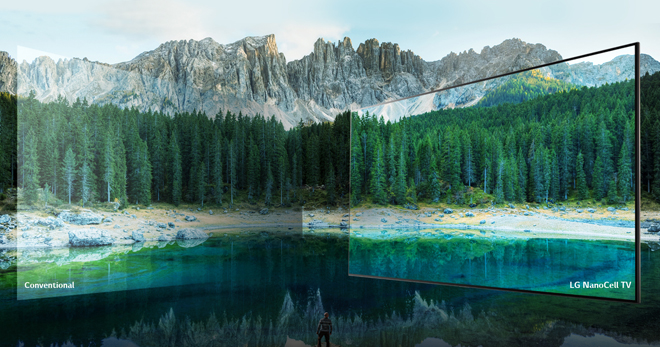 Moving on to HDR performance, LG showcased a highlight reel of glossy imagery featuring colorful liquids, glasses, and dripping honey. While performance was similarly strong on both displays, the SM9500 offered just a bit more punch in its highlights without losing detail, particularly on the shining portions of the glass. It wasn't a night and day difference, mind you, but the NanoCell did seem to edge out the QLED's brightness here.

Switching gears to motion, a clip featuring a panning wood grain wall was shown. There was a fairly subtle difference, but the LG did maintain detail in the moving grain just a hair better than the Samsung. It should be noted, however, that clips like this are chosen specifically to play toward the benefits of the TV in question, and I'm not sure how much of a difference one would see in similar real world content.

For black level performance, an HDR scene from La La Land was showcased. Unfortunately, though dim, the demo room still had a fair amount of ambient light present, which made judging the TV's local dimming contrast a bit difficult. But based on what I saw, the Samsung QLED managed to snag a slight edge here -- at least, from a direct viewing angle.

From a center position, the black bars in the picture looked a little lighter on the LG with slightly elevated portions visible in certain sections (likely from the dimming zones). Performance was still quite good for an LCD, but the QLED's blacks looked just a tad more uniform. From an off-angle view, however, the LG TV maintained its contrast much better than the Samsung, which produced a comparatively washed out look with more dimming zones visible from the side. 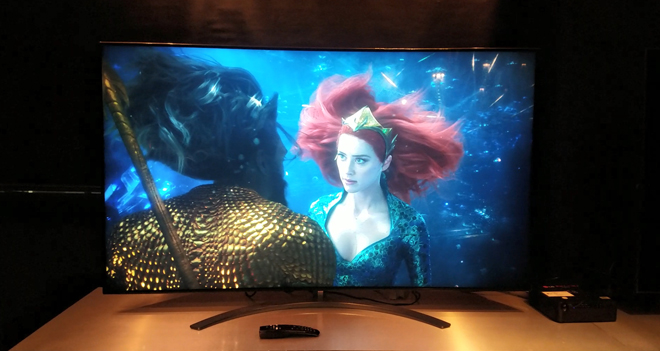 Finally, to offer an overall look at the TV's performance, an HDR clip from the climax of Aquaman was shown. Filled with colorful underwater action and vibrant, glowing creatures, the scene actually provided a great showcase for both TVs -- though in its default Cinema mode, the LG NanoCell had more robust specular highlights and richer colors. The golden yellow hue of Aquaman's suit and glowing trident were especially impressive, casting just a bit more vibrancy on the SM9500 than on the Samsung. With that said, the difference was pretty subtle and black levels from head-on did still looked a bit better on the QLED.

On the other hand, off-angle viewing was even more eye-opening on this clip. The QLED lost a lot of its vibrancy and contrast from a slight angle, producing a washed out and inaccurate picture. Meanwhile, the NanoCell managed to maintain its picture quality with only slight degradation from the side. In fact, the SM9500 and its IPS panel just might have the most impressive viewing angles I've ever seen on a 65-inch LCD TV.

Though relatively brief, my time with LG's new 65-inch SM9500 NanoCell 4K TV left me impressed. With extensive HDR support, future-proof HDMI 2.1 capabilities, local dimming, wide color, and strong brightness performance, this looks like a very solid HDR TV option. In fact, the display's use of an IPS panel has resulted in some of the best LCD off-axis viewing performance on the market.

With that said, I'm not quite sure how well that IPS panel will perform in a completely dark home theater environment. Though known for better viewing angles, IPS LCDs are also known for less than stellar contrast compared to VA panels used on most competing models. In a relatively dim room, the SM9500 seemed to hold its own admirably, but black levels might not be able to get as inky as some competing sets. Likewise, until we get to perform more extensive tests, it's unclear how well the TV's full array local dimming implementation works.

And though packed with a nice assortment of features, the SM9500 is poised to face some very tough competition this year as more budget-friendly LCD models continue to raise the bar for value-priced performance. At an MSRP of $2699, LG's flagship 4K LCD will likely end up being quite a bit more expensive than several 2019 LCD models with similar specs from VIZIO, TCL, and Hisense. 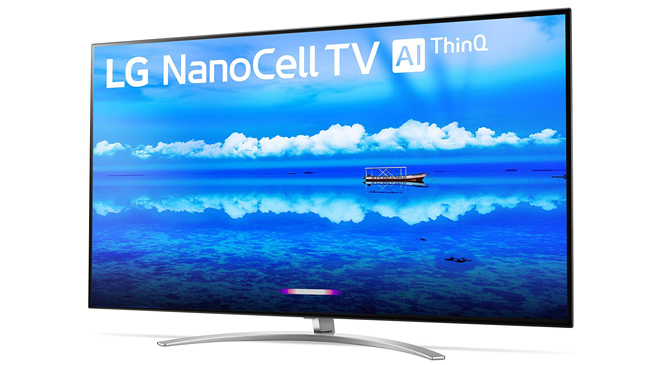 Of course, it's very unlikely any of those models will be able to offer the same viewing angle capabilities as this set. We'll need more time with the TV to offer a full judgement, but the SM9500 is looking like a very solid option for users who want a versatile living room display capable of higher brightness than an OLED while still maintaining strong viewing angles.

Sale Price 999
Buy Now
3rd Party 999
In Stock.
See what people are saying about this story or others
See Comments in Forum
Previous Next