Overview -- Marked by robust connectivity options and strong audio performance, the SVS Prime Wireless Speaker System is a stylish, modern stereo solution with support for a variety of streaming services, wired sources, voice control via an Alexa device, multi-room playback, and more. On the downside, I did run into some intermittent issues with the DTS Play-Fi platform when paired with my specific Wi-Fi configuration, and the package is sadly missing a few extra conveniences like a dedicated remote. Still, actual audio quality here is very impressive for its class, resulting in a comprehensive and versatile music system. Recommended.

Though few options beat a good old fashioned stereo speaker and amp combo when it comes to overall music performance, sound bars and compact Bluetooth speaker units are becoming increasingly popular audio solutions for many consumers thanks to their added convenience and wireless support -- leaving some classic 2-channel setups in the dust.

But what if a stereo speaker package could incorporate the simplicity and extensive connectivity options of a modern streaming audio device without losing wired support, sacrificing overall playback quality, or requiring a separate receiver?

Compatible with a variety of streaming and wired sources, the powered two-speaker solution blends the convenience of an all-in-one audio streaming system with the superior imaging and sonics of a great stereo configuration.

The SVS Prime Wireless System uses an active-passive stereo bookshelf speaker array powered by a 200-watt (50 watts x 4) internal Class-D amplifier and a 192KHz/24-bit DAC. An AC power cord, a 10' interconnect cable to pair the active and passive speakers together, and 8 Elastomer Bumper Feet are also included in the package. 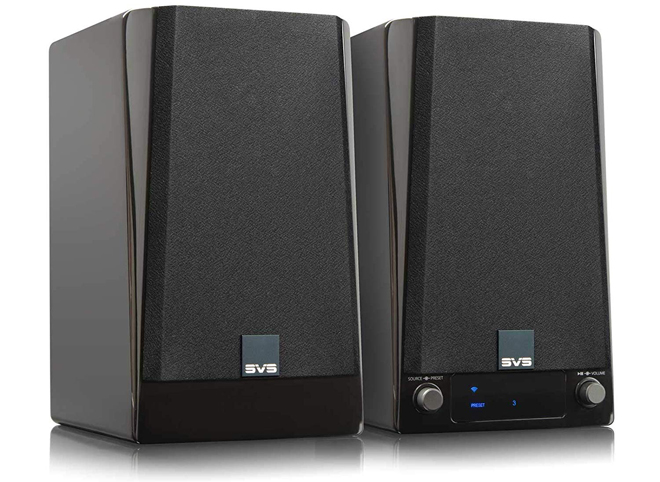 Both speakers feature a stylish piano black or piano white glossy finish with a removable protective cloth grille. An attractive front-panel LED display is integrated on the active speaker unit as well with illuminated blue and green text to indicate various sources, along with a left and right knob for switching inputs, presets, play/pause, and adjusting volume. As a whole, the design offers a handsome aesthetic that should fit well with a variety of contemporary decors.

In general, the SVS Prime Wireless Speaker System is relatively simple to get set up, but the DTS Play-Fi app required for wireless connectivity might prove a little lacking for some users.

After unpacking the device, users simply need to connect the passive speaker unit to the active speaker unit using the included 10' cable. Though the length of the cable does limit how far apart you can place the two speakers, the distance should be sufficient for most needs -- and If not, the company is releasing 15' and 20' options. Once the power cable is plugged in, the system will automatically turn on and stay on (there is no on/off switch).

Wired playback from a connected CD player, turntable, TV, or other audio sources via optical, RCA, or Aux input can be enjoyed without any further installation. With that said, users will need to make sure that their device is set to output PCM since the speakers do not include built-in Dolby or DTS decoding.

For wireless connectivity, however, users will need to download the DTS Play-Fi app on an iOS or Android mobile device. Once launched, the app pairs with the speakers to configure Wi-Fi settings and download firmware updates. And after the speakers are connected, the DTS Play-Fi app offers integrated access to a variety of music services, including Amazon Music, Deezer, Tidal, iHeart Radio, Napster, and more, along with the ability to play audio files stored on your mobile device. Likewise, the system also supports Spotify Connect playback via the separate Spotify app. 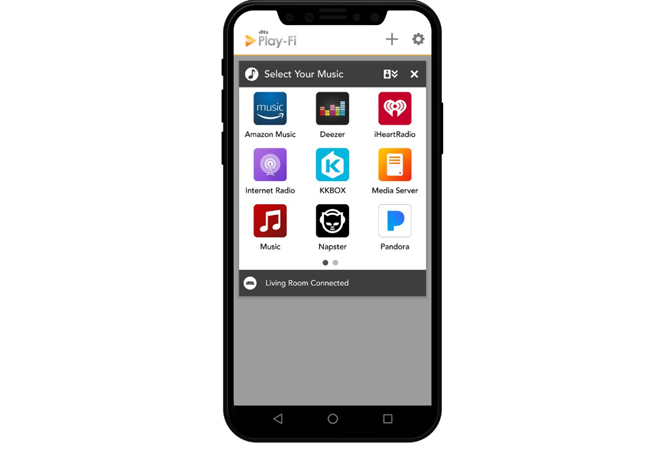 A Critical Listening mode can also be toggled in the app to enable native rendering of high-resolution files (up to 24-bit/192KHz) with no down-sampling or network synchronization adjustments. And, for customers looking to build a whole-home audio system, the app can be used to configure a larger multi-room setup as well when paired with additional DTS Play-Fi enabled audio components on the same Wi-Fi network.

In addition, users can create up to six custom presets using the physical knobs on the active speaker, enabling customers to assign shortcuts to their favorite stations, albums, and playlists for quick replay without having to go back to the app. In practice, this worked great, allowing me to set presets for different albums playing on Spotify or shuffled artists on Amazon Music.

And for customers who own an Alexa device, the system also supports voice control for launching tracks and controlling playback. After linking the speakers with my Echo Dot, this feature worked very well, enabling me to play songs through hands-free commands. 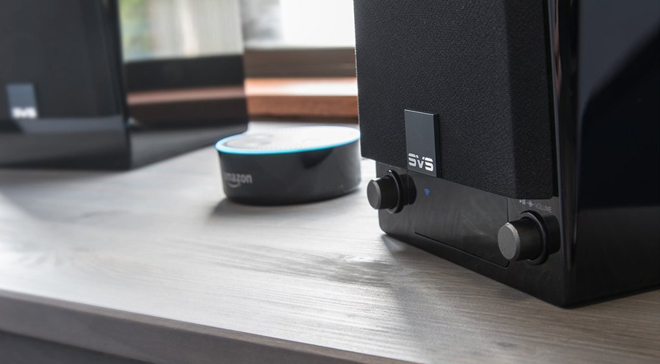 General navigation and playback both worked fairly well via the Play-Fi app itself as well, but I did run into some occasional issues. A couple of glitches cropped up here and there with some MP3 and FLAC files skipping or entering loops that caused the platform to crash, but these instances were rare. With that said, the interface itself is a little barebones and clunky, and the system's lack of a dedicated remote is a bit disappointing.

Having to always turn to a smartphone or walk up to the speaker's physical knobs to adjust the volume or switch inputs (only possible from the knobs) just isn't as convenient as having a simple click-button remote. On that note, though the Play-Fi app is supposed to support volume control for wired sources like a TV, during my testing the app's volume slider never actually worked when playing content through the optical input.

Sadly, my Play-Fi issues didn’t end there. While initial setup and playback from a variety of services worked just fine, later on during my evaluation, the app would intermittently display a message saying "Searching, No Play-Fi devices detected" despite the fact that the speakers and mobile device were always both successfully connected to the same Wi-Fi network. Unplugging and plugging the speakers back in or restarting my router would typically fix the issue, but after a couple of days, the Play-Fi app always seemed to lose detection of the speakers again. Meanwhile, playback from the Spotify app, the physical preset buttons, or Amazon Alexa commands, always worked consistently without any issues.

After some back and forth with Play-Fi tech support, I was told that the network broadcast announcements from the speaker were no longer being detected by my phone or passed through my router -- which could apparently be caused by some sort of setting or configuration option in my router. Unfortunately, further troubleshooting with my ISP did not yield a consistent fix for the issue. Some user reviews online for a variety of Play-Fi products seem to indicate that other customers have experienced similar problems with certain internet setups. In other words, your mileage may vary here, and there might indeed be a simple solution I just haven't found yet. As it stands, though, my experience proved to be a bit frustrating in this regard.

To test out the SVS Prime Wireless Speaker System, I listened to a wide assortment of music tracks from streaming services like Spotify and Amazon Music, as well as MP3 and FLAC files, over Wi-Fi and Bluetooth via a Samsung Galaxy S7. Likewise, I sampled movie playback via the optical connection on a smart TV with a variety of streaming titles and Blu-ray discs, including Avengers: Infinity War, The Matrix, Wonder Woman, Kong: Skull Island, Black Panther, The Last Jedi, The Haunting of Hill House, and more.

Overall, music performance was fantastic for a pair of bookshelf speakers of this type, offering a nicely balanced, room-filling, and dynamic sound with a rich mid-range, clean high-end, and solid bass response throughout a wide range of tracks from artists like Lady Gaga, Fleet Foxes, Radiohead, Ariana Grande, Cardi B, AC/DC, Gnarls Barkley, The Beatles, and more. 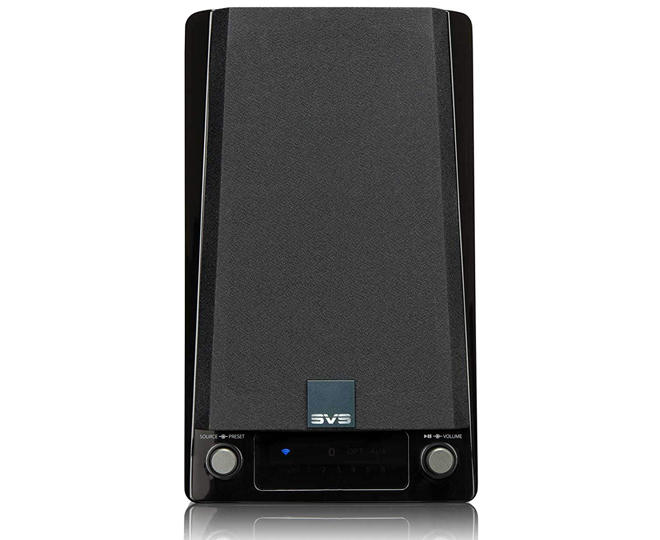 Though the bookshelf speakers couldn't quite reach the same range as larger models, the system's general audio profile favored a pleasingly neutral sound, avoiding overly bright or sharp treble. Likewise, while not capable of achieving the guttural kick that bigger speakers or a dedicated subwoofer can produce, the stereo pair's low-end offered a surprisingly tight and punchy presence during music playback. And as a nice added feature, users can also opt to connect a separate sub for extra bass if they're not satisfied with the out-of-box performance.

Quieter tracks like Norah Jones' "Don't Know Why" and Bradley Cooper's "Maybe It's Time" came through with full, intimate vocals while slowly building songs like Lady Gaga's "Shallow" and Billie Eilish's "Come Out And Play" displayed nice range, transitioning from gentler tones to more commanding crescendos while maintaining cohesion and clarity throughout.

Meanwhile, steady bass beats under Ariana Grande and Nicki Minaj's "The Light is Coming," Cardi B's "I Like It," and Gnarls Barkley's "Crazy" brought some decent thump without overpowering other frequencies, though again, users looking for a true floor-shaking low-end will need to supplement the system with a separate subwoofer. 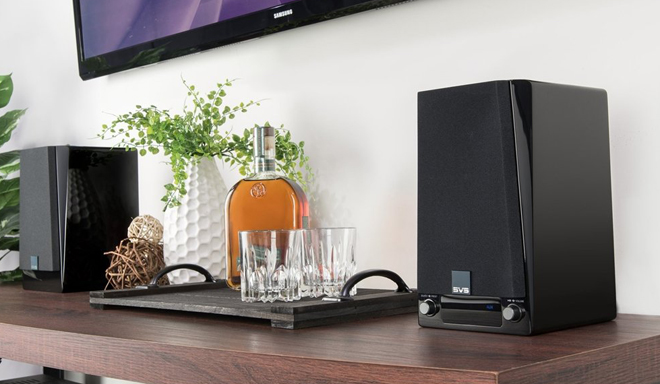 Stereo separation and imaging were also impressive, fully demonstrating the benefit that a two speaker system like this has over single-unit sound bar models and compact Bluetooth speakers. Left and right separation between the violin backing and Paul McCartney's vocals on The Beatles' "Eleanor Rigby," and cash register effects during the opening moments of Pink Floyd's "Money," were particularly good showcases, revealing a great sense of space and a pleasing level of true distance that just can't be replicated on typical sound bars.

And rounding out my music testing, Radiohead's "Life in a Glass House" proved to be a great demo for the Prime Wireless Speakers' overall detail, clarity, and balance -- resulting in a nice delineation between all of the different musical elements in the track as the system handled the song's jazzy mixture of instruments with distinct separation and wonderful dimension. 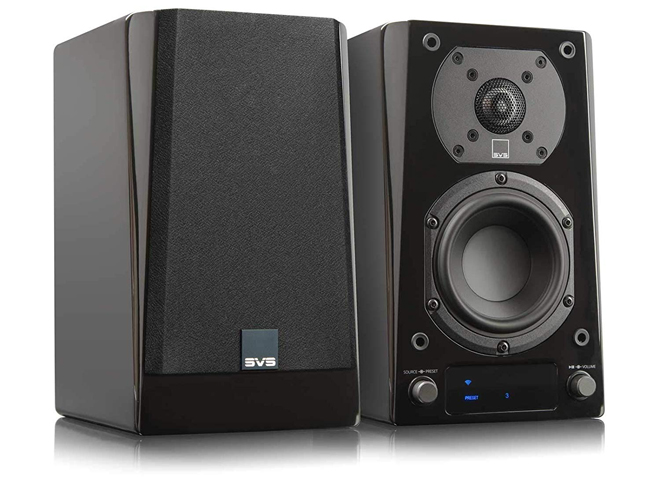 Outside of music playback, movie performance when connected to a smart TV was also quite solid, creating a pleasing and expansive experience. With that said, when faced with blockbusters like Avengers: Infinity War and Wonder Woman, the system's lack of a subwoofer became much more apparent, revealing the bookshelf speakers' home theater limitations.

Don't get me wrong, the Avengers' showdown with Thanos and shootouts in The Matrix still carried immersive stereo separation with nice imaging and a clean and precise soundstage, but bass response always felt constrained and dynamics came across as just a tad flat. In other words, though the speakers on their own do indeed offer a huge improvement over integrated TV audio and are a great fit for more casual viewing conditions -- home theater fans will definitely want to pair these with a subwoofer for more critical movie watching.

Offering support for a comprehensive selection of wireless and wired sources, the SVS Prime Wireless Speakers are a great option for users in need of a simple but high-quality 2-channel audio system. Stereo music playback is great, and though not quite as impressive, movie and TV playback are also very solid.

With that said, the system's lack of a dedicated remote is disappointing and I did encounter some connectivity issues when using the DTS Play-Fi app with my internet configuration. Thankfully, playback via the Spotify app (my primary source of streaming music) worked consistently.

Play-Fi issues aside, this is one of the most versatile bookshelf speaker systems on the market right now. For users who want a Wi-Fi/Bluetooth enabled audio solution without sacrificing true stereo imaging or requiring an additional amp, the SVS Prime Wireless Speaker System is Recommended.

Sale Price 599
Buy Now
3rd Party 599
In Stock.
See what people are saying about this story or others
See Comments in Forum
Previous Next