Overview -- As a value priced audio solution, the TaoTronics 2.1 Channel Sound Bar with Subwoofer offers decent stereo performance and a simple plug-and-play design. Unfortunately, however, the device is prone to a few distracting audio quirks and lacks some features found on similar entry-level models from other brands. In general, playback can be adequate, but with better performing options out there for just a bit more money, it's hard to recommend. Skip it.

And that's where the TaoTronics 2.1 Channel Sound Bar with Subwoofer comes in. A no-frills audio solution, the system provides decent value-priced stereo performance.

But sadly, a few key limitations and quality issues hold the overall package back.

The TaoTronics 2.1 Channel Sound Bar system consists of a 34-inch 2.1 channel sound bar unit and a wireless 6.5-inch subwoofer. A simple click-button remote control, power cords, a 3.5mm to 3.5mm cable, an optical cable, and a user manual round out the package.

Aesthetically, the sound bar unit itself looks pretty good for a budget model, boasting a simple but pleasing black finish with silver accents on the side, and a fairly sturdy construction with a hard, non-removable grill over the drivers. An LED screen with simple digital text for indicating volume and source is integrated on the front, but unfortunately, it can't be dimmed or turned off during use. Meanwhile, a row of click buttons for Power, Play, Skip, and Volume are featured on the top of the unit. 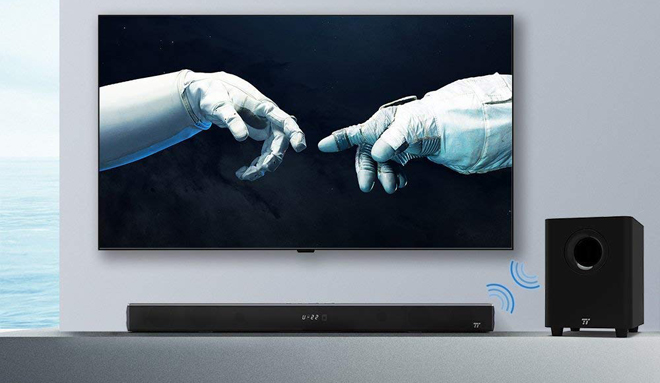 Under the hood, the sound bar features 4 x 2-inch drivers and is rated for 40W. In addition, the wireless 6.5-inch subwoofer is rated for 80W. Connections for power, optical audio, coax audio, and aux audio are housed on the back of the sound bar. Unfortunately, the unit does not include HDMI or any kind of video pass-through. Beyond wired connections, the system also supports Bluetooth wireless.

To install the sound bar, customers simply need to plug in the included power cables, connect the sound bar to a TV with an optical cable, and then power on the unit. The sound bar and wireless subwoofer will automatically pair. And from there… you're essentially done. There's no need to fiddle with mobile app configurations or HDMI ARC settings. You just plug it in and use it.

That is, with one notable exception some users will need to watch out for. Unfortunately, the sound bar does not support any kind of Dolby Digital or DTS decoding. It just supports PCM playback. With that in mind, customers will need to make sure that their TV or other connected device's audio output is set for PCM. If it's set to anything else, users will be treated to some ear-piercing scratching sounds.... which I discovered the hard way. 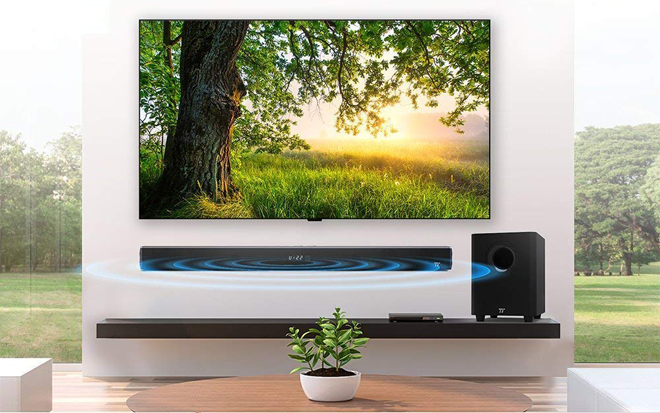 Finally, though the simple plug-and-play setup will be appealing to some, the system lacks any kind of advanced audio configuration options. Actually, it lacks any kind of real configuration options at all. Outside of volume, there are no adjustments or modes. Not even standard bass and treble. And while the unit offers ample volume, I found that its lowest volume setting proved to be a bit louder than most other devices.

For review purposes, I tested the sound bar with a few different Ultra HD TVs and an LG Blu-ray player via optical. Throughout my evaluation, I watched a variety of discs and streaming content, including titles like Justice League, Blade Runner 2049, Sucker Punch, Lost in Space, Shameless, Chilling Adventures of Sabrina, and more.

In general, overall stereo performance was pretty solid, offering a decent sense of space and directionality, along with a welcomed improvement over most integrated TV speakers. Likewise, the subwoofer balanced well with the system, providing a subtle but welcomed expansion of bass without becoming boomy. 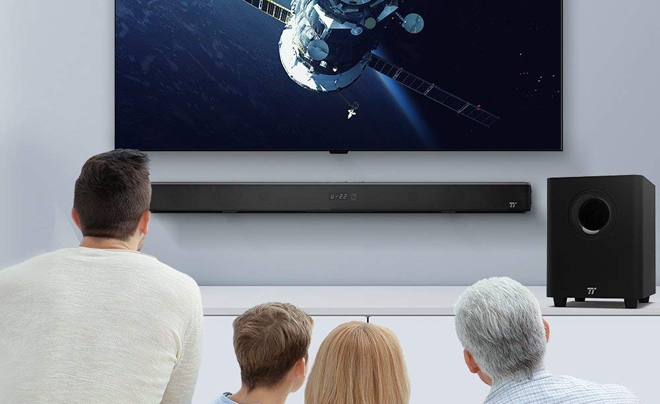 With that said, compared to many other sound bars I've sampled, the system as a whole carried a relatively flat and occasionally muddy and muffled sound, lacking the range and fidelity of more robust models.

The Superman returns sequence from Justice League proved to be a nice demonstration of the sound bar's strengths and weaknesses. As Clark attacks his fellow heroes, the sound bar managed to produce nice stereo imaging between the left and right channels, bringing a fairly wide sense of space to the track. At the same time, however, effects lacked dynamics and clarity in the highs, making it seem like there wasn't enough separation between different elements like music, speech, and ambience.

And though it did improve bass performance, the subwoofer came across as a bit anemic and muted compared to others included with more home theater-geared sound bar models, failing to really bring much oomph to the proceedings. 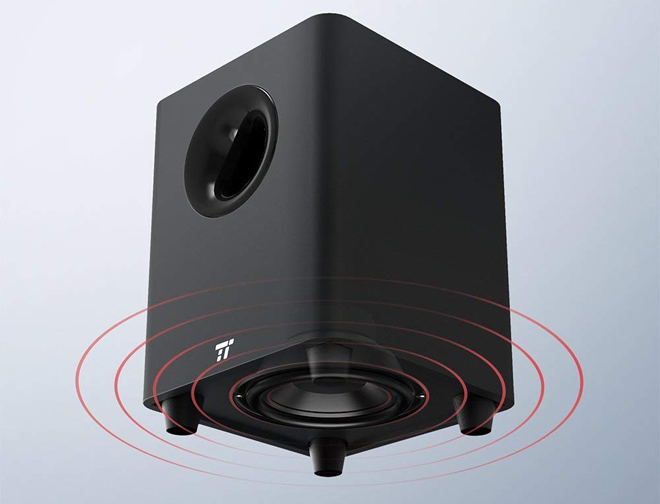 In addition, I also ran into two other notable quirks that proved to be a bit worrisome. First up, the sound bar seems to produce low background hissing/static whenever a signal is present. To be fair, this hiss is mostly undetectable when actual audio is being played, but when switching between titles or navigating through content options in smart TV apps like YouTube or Netflix, this hiss becomes much more apparent. Likewise, it's not something I've encountered in models from other brands and it just gives the system an unfortunately cheap feel.

And beyond hissing, I also ran into some intermittent popping noises from the subwoofer, making it sound like there was some kind of connection problem. I've encountered similar issues to a far less degree with other wireless subwoofers, and based on googling it appears that popping like this might be created by some kind of wireless interference, possibly caused by other nearby devices or my router.

With that in mind, I tested the sound bar system in a smaller room with fewer competing devices and I didn't encounter the popping. Bottom line: your mileage might vary on this kind of issue depending on your setup, but in my living room, the popping became quite frequent and annoying -- even when not playing any content. 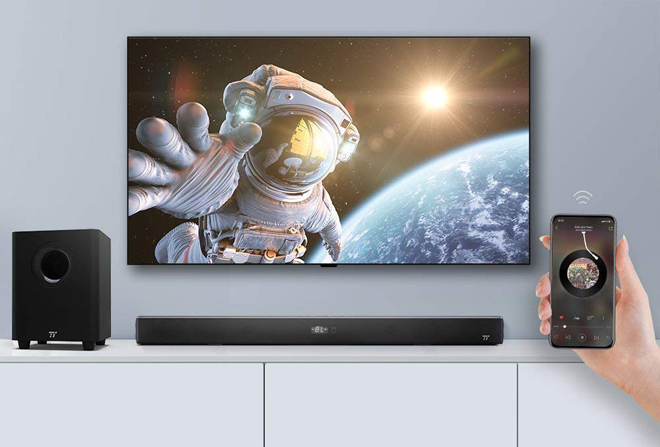 Finally, I also sampled the sound bar's Bluetooth wireless connectivity by listening to several MP3s and streaming tracks from Spotify via my Samsung Galaxy S7, including songs by Arcade Fire, Arianna Grande, Pink Floyd, and more.

Overall music performance was solid and perhaps a bit more engaging than movie playback, offering relatively full vocals, nice separation, and a predominantly warm audio profile. Still, dynamics were not as wide as other models I've reviewed and the system lacked crispness in the highs.

For users who want a simple, inexpensive plug-and-play audio solution, the TaoTronics 2.1 Channel Sound Bar with Subwoofer might get the job done. But while it's one of the most affordable sound bar options available with a separate wireless subwoofer, I just can't recommend it when there are several better performing products out there for just a bit more money.

Though an improvement over integrated TV speakers, the sound bar's movie performance is a bit flat and muddy, I ran into some issues with background hissing and subwoofer popping, and the system as a whole lacks home theater friendly features like Dolby, DTS, and HDMI support.

There is some value here, but the cons just outweigh the pros in this instance. Skip it.