Though it might still seem like the 4K HDR display market is just coming into its own, some manufacturers have already started introducing 8K TVs into the mainstream. But is 8K really an exciting step forward for the home theater industry? Or is it just an unnecessary increase in resolution… and price?

While more pixels certainly offer the potential for more detail, there's some debate about whether any of that extra visual information can actually been seen under most viewing conditions. And is there even any benefit to the tech with very little native 8K content in the pipeline for the foreseeable future?

Well, we recently got a hands-on look at one of the first 8K displays to hit the US market: The Samsung 85-inch Q900 QLED 8K TV.

And after viewing some side-by-side demos comparing the panel to one of the company's 4K models, we've come away with some early impressions on what 8K has in store for the home theater industry.

Released in October of this year, the 85-inch Q900 QLED TV is now available in the US for an MSRP of $15,000. For comparison's sake, Samsung's largest flagship 4K models, the 75-inch Q9 QLED TV and 82-inch Q8 QLED TV, are both currently on sale for $4,998 -- revealing a pretty hefty premium for those extra pixels. 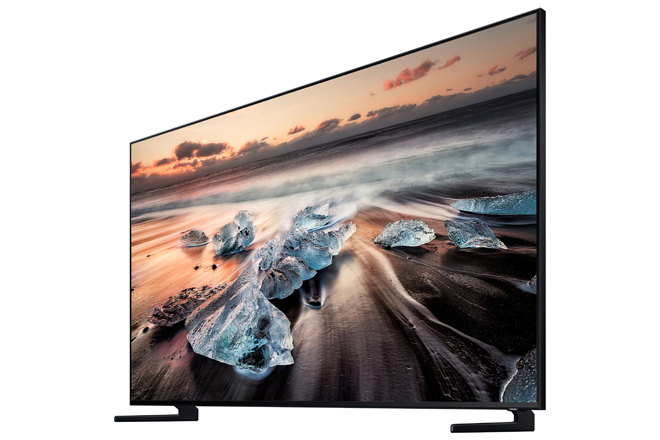 And while there might not be any true 8K content to play on the display just yet, the Q900 incorporates advanced AI-powered 8K Upscaling technology and Samsung's 8K Quantum Processor to convert lower resolution content from any source to 8K. 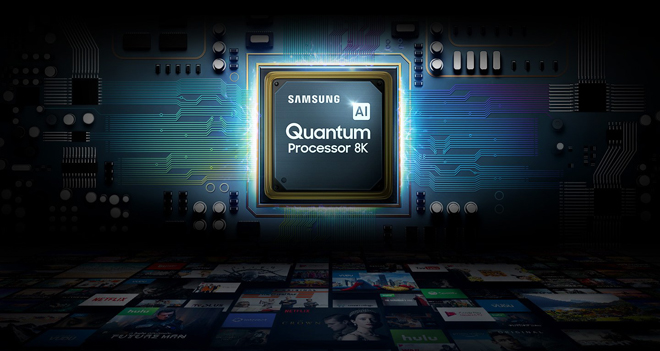 But is that upscaling tech really enough to justify the need for 8K resolution? Well, let's take a look at the demos...

To highlight the Q900's display performance and AI-powered upscaling, Samsung offered a few side-by-side demos -- pitting the 85-inch Q900 QLED 8K TV against the company's 82-inch Q6 QLED 4K TV. Clips and still images at various resolutions and quality were shown on both displays at the same time, allowing one to see how each panel scaled the material.

The first and perhaps most telling demo featured a full-screen image of a newspaper in native 8K on the Q900 and 4K on the Q6. As the only native 8K content used during the demonstration, this simple still-picture actually showed off the Q900's benefits better than any other material sampled. On the Q900, even the smallest lines of text were visible in perfect clarity, as if someone printed out an over-sized copy of the paper and framed it inside the TV. Meanwhile, the 4K image looked solid on the Q6, but text was noticeably less distinct and comparatively blurry -- especially from a close-up view.

In fact, I was actually quite surprised at just how appreciable the difference was. To be honest, I've had my doubts about how well the human eye would actually be able to differentiate between 8K and 4K content, but at screen sizes this large certain material -- especially those with tightly packed small details, patterns, and text -- can definitely gain a welcomed uptick in clarity.

However, when it comes to upscaling -- which is how most buyers will be seeing anything they watch on an 8K set for the time being -- things become a bit less eye-opening.

In general, the Q900 certainly offered a superior image over the Q6, but the differences in perceived detail were often quite subtle and, in some cases, not really discernable at all. A 4K HDR clip from Planet Earth II featuring an eagle in the snow and a very quick snippet from War for the Planet of the Apes featuring an explosion did look a bit more refined on the Q900, but it was actually the set's superior brightness, contrast, and color that made the most dramatic difference.

Various 4K reels of mountains, rivers, and cityscapes brought some slightly more appreciable upscaling benefits, with better accentuated fine textures in rocks, ripples in water, and visible windows in buildings but, again, most of these improvements were subtle in nature and most evident from a rather close distance to the displays.

Lower-res content seemed to give the Q900 more of an edge as well. A 1080p clip of flowers showed off the AI-powered 8K upscaling nicely, making the material look comparatively more like native Ultra HD content. Likewise, a 720p Buffalo Wild Wings commercial and a 480p news clip offered a solid demonstration of how the Q900 can improve lower quality material. With that said, though text was sharper on the 8K panel, I actually noticed slightly more noise and artifacts around the edges of letters on the Q900 compared to the Q6 during the Wild Wings clip. As a whole, though, the AI-upscaling did a slightly better job of making lower-res material look more like Full HD.

Based on the demo content, the Q900 proved to be a very impressive display, easily besting the Q6. But then, a flagship QLED model beating an entry-level one isn't really surprising -- regardless of the panel's resolution. Though detail did show marginal improvements thanks to the 8K upscaling, it was really the Q900's wider color gamut, full-array local dimming, and superior peak brightness abilities that made the most difference. It's definitely among the best performing LCDs I've ever seen… but I'm not convinced its extra pixels have all that much to do with its fantastic picture quality.

I never like to be too negative about emerging display advancements, especially when the tech is still in the early adoption phase -- but based on what I've seen so far, I'm just not sold on the necessity of an 8K TV. While Samsung's AI-upscaling shows a lot of promise and I hope the company continues to evolve the tech in more display models, as it stands, its benefits are subtle and don't quite offer the appreciable improvements in detail needed to justify paying such a premium. And with almost no native 8K content on the horizon, I'm a bit perplexed as to why manufacturers are already pushing for more pixels.

Though the Q900 is an undeniably gorgeous display, the local dimming and quantum dot tech that really make the TV stand out can also be found on many great 4K models, like Samsung's own 2018 Q9. The added resolution just doesn't make all that much of a difference.

Of course, my feelings on the benefits of an 8K TV could change if actual native 8K content eventually becomes widespread. The newspaper image really did reveal a more demonstrable difference than I was expecting. Sadly, seeing as many movies are still being finished in 2K resolution instead of 4K, I just don't see an even bigger jump to 8K production and post-production really hitting the mainstream anytime soon.

Bottom line? Samsung's new Q900 8K QLED TV is one of the most impressive LCD displays on the market, but without more native 8K content, the increased resolution itself currently offers very little benefit over 4K. In other words, 8K isn't quite worth it... yet.

List Price $14999.99
Go To Store
See what people are saying about this story or others
See Comments in Forum
Previous Next