Overview -- The Pioneer VSX-933 7.2-channel AV Receiver offers support for 5.2.2 Dolby Atmos and DTS:X configurations, along with 4K HDR/Dolby Vision pass-through, and a robust selection of wireless streaming options. And with an MSRP under $500, the unit is competitively priced for a 2018 receiver in this class. With that said, there are some 2017 models with similar specs still available for less, and users who want to configure beefier immersive audio setups with more overhead and surround speakers will need to look elsewhere. But if it's a 5.1.2 or standard 7.1 setup you're after, this fully-featured receiver is hard to beat. Recommended.

As Dolby Atmos and DTS:X systems continue to become more and more prevalent, AV receiver manufacturers continue to expand the maximum number of supported speakers on their units -- finally making the dream of a 9.2.4 or 7.2.6 setup a reality. Of course, flagship 13.2-channel receivers come with very hefty price tags, relegating the most expansive home theater rigs to those buyers who happen to have equally expansive wallets.

But that doesn't mean that budget-conscious buyers are completely out of luck when it comes to dipping their toes into the world of immersive audio. Case in point: The Pioneer VSX-933 7.2-Channel AV Receiver.

Though it can't offer the same level of immersion as its beefier siblings, the VSX-933 still provides a great entry-level Dolby Atmos and DTS:X solution, offering support for 5.2.2 speaker configurations, along with comprehensive video pass-through capabilities and a great assortment of wireless music streaming options -- all for a current MSRP of $479.

Under the hood, the unit features a Digital Quad-Core 32-bit DSP (Cirrus Logic) and a 384 kHz/32-bit D/A Conversion with AK4458 (AKM). The device includes support for up to a 5.2.2 immersive audio configuration with two ceiling speakers or two up-firing modules. Likewise, users can instead opt for a traditional 7.2 surround sound configuration with two surround back speakers. Meanwhile, a powered Zone 2 option is featured as well with dedicated speaker terminals, allowing customers to connect an additional 2-channel speaker setup to the receiver for use in another room. With that said, when Zone 2 playback is active, Zone 1 becomes limited to 5.1 output.

When it comes to playback, the VSX-933 supports all the major players, including Dolby Atmos, Dolby TrueHD, Dolby Digital Plus, DTS:X, DTS-HD Master Audio, and DTS decoding, along with support for the Dolby Surround and DTS Neural:X up-mixing formats. Beyond surround sound, the unit offers support for up to 192 kHz/24-bit ALAC, AIFF, FLAC, WAV (RIFF), and 5.6 MHz DSD via USB and Network connections.

The receiver also includes a standard remote control which maintains the more simplified design layout that Pioneer and Onkyo have been using in recent years. Finally, an indoor FM antenna, an AM loop antenna, and a speaker setup microphone are all included as well.

Once everything is unpacked, setting up the VSX-933 is very straightforward. Users just need to connect their speakers to the receiver's terminals, hook up any HDMI devices they have, and then power on the unit. For review purposes, I evaluated the Pioneer VSX-933 receiver using a 5.1.2 Onkyo speaker system with up-firing front left and right channels. Likewise, I connected the unit to a Samsung Q9 QLED TV and a VIZIO P-Series Ultra HD TV during different parts of my evaluation time, along with an LG UP970 4K Ultra HD Blu-ray player, a Roku 3, and a Nintendo Switch.

The MCACC process itself is fairly quick and painless, though the calibration suite isn't quite as thorough as some systems found on step-up models or units from other manufacturers. Once the included mic is plugged in and placed at ear level in the central listening position, the receiver's MCACC cycles through various test tones equalizing the response and automatically configuring the optimum speaker size, level, and distance.

For my setup, I found the MCACC results to be quite accurate and beneficial, though the subwoofer level was pumped up a little too high for my liking. Of course, users are also free to manually adjust all of the MCACC settings as well. On that note, menu navigation is pretty straightforward, with access to various submenus for speaker configuration, assigning inputs, and other housekeeping options. Likewise, the OSD worked well throughout all my testing, allowing me to bring up helpful info about audio codecs and video pass-through details during playback from HDMI connected sources.

And as a pleasant surprise, after initial setup, I was happy to discover that the VSX-933 receiver was actually free from a pesky annoyance I typically encounter with my subwoofer and the Onkyo TX-NR555 receiver that I own. My subwoofer model doesn’t have a dedicated power switch of its own and instead only activates when it receives a signal. For whatever reason, the TX-NR555 only seems to trigger the sub on when a loud bass cue is present in a soundtrack, causing the woofer to stay off during less intense content unless I pump up the volume really high. But with the VSX-933, the same subwoofer always turned on immediately as soon as any audio signal began to play from the receiver regardless of LFE intensity.

But while implementing the receiver into my existing home theater rig was mostly painless, I did run into some intermittent audio sync issues when connecting the unit to the ARC port of a VIZIO P65-F1 P-Series 4K TV. This was most notable when playing YouTube videos through the TV's SmartCast platform, but Netflix, Amazon Prime Video, and VUDU also exhibited slightly out of sync playback at times as well. Disabling the receiver's "Auto Delay" option in the HDMI ARC menu seemed to alleviate the problem, but this then caused syncing issues with some Blu-ray discs through my LG UP970.

It should be noted, however, that I did not encounter any syncing issues whatsoever when using the Pioneer receiver with a Samsung Q9 TV and its internal apps. This initially led me to believe that the VIZIO TV was the culprit, but then the P-Series ended up working just fine through ARC when I connected it to an Onkyo receiver.

Bottom line: It's not clear what component was the problem here, but users who own a VIZIO display might come across similar ARC syncing issues when using the VSX-933.

To demo the receiver's audio performance, I played back a wide variety of Dolby Atmos, Dolby TrueHD, Dolby Digital Plus, DTS:X, DTS-HD MA, and PCM content, including several Ultra HD Blu-ray discs and streaming titles from various sources like VUDU, Amazon Prime Video, and Netflix. For the majority of my testing, I opted to keep the device in its "Direct" listening mode, which minimizes processing while still engaging the unit's MCACC speaker calibration.

In general, I typically find that most home theater receivers offer very similar sound when compared to one another using the same speakers. With that in mind, I was actually a bit surprised to notice a warmer tonal quality through the VSX-933 compared to my Onkyo TX-NR555 after swapping the units out.

This distinction in sound mostly applied to playback using each receiver's auto calibration EQ, but even in their pure modes, there seemed to be slightly more emphasis on the lower mid-range through the Pioneer. While mostly pleasing, this warmer profile also resulted in a comparatively boomy quality in dialogue and bass response at times versus the Onkyo's brighter yet crisper output. In the end, which approach is superior mostly comes down to a matter of personal preference, and after finishing my evaluation of the VSX-933, I actually found that the Onkyo sounded a little too thin when I swapped it back in. 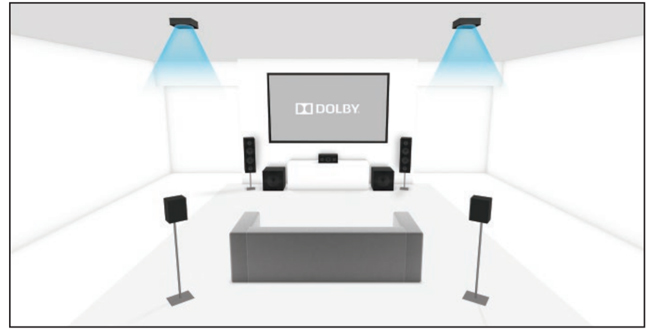 I've seen some users debate whether a 5.1.2 setup is really worthwhile over a traditional 7.1 configuration on 7-channel receivers like this -- but in my experience, I've always found the added height plane to bring a bit more immersion and variety to the listening experience, even if one does lose out on surround back speakers.

Meanwhile, traditional 5.1 and 2.0 content also sounded great, whether playing in their native formats or using Dolby Surround or DTS Neural:X. We've already covered the ins and outs of both up-mixing formats pretty extensively in the past (HERE and HERE). With that said, I've actually always been more of a purist in this regard and tend to prefer keeping these modes off for most conventional stereo and surround sound sources. 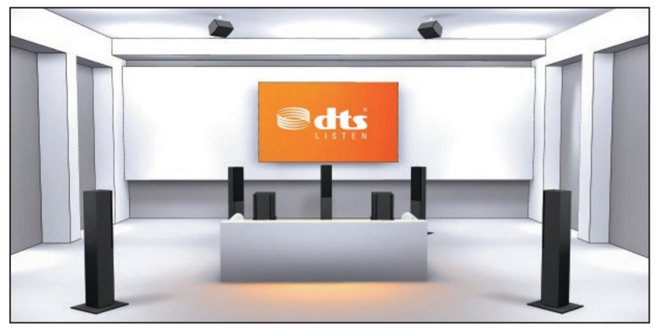 All things considered, outside of a slightly boomier quality than I'm used to at times, overall home theater performance with the VSX-933 was free from any notable audio quality issues or quirks, providing enough power and decoding support to easily satisfy most 5.1.2 or 7.1 channel needs.

In practice, these features all worked great when streaming a variety of MP3s, FLAC files, and Spotify tracks from my Samsung Galaxy S7 to the receiver, offering great playback quality and strong stereo performance for a variety of songs from artists like Pink Floyd, The Beatles, Arianna Grande, Nicki Minaj, Arcade Fire, Norah Jones, and more.

Bass was deep, vocals were clean, and the receiver's slight bias toward a warmer sound worked well for a variety of musical styles. Chromecast streaming was as simple as opening a supported mobile app, pressing the cast button, and clicking on the VSX-933. Meanwhile, DTS Play-Fi streaming offered very similar functionality along with a multi-room audio option, though I could not test this function with my setup. With that said, there were a couple of times when the Play-Fi app was unable to find the Pioneer receiver despite both devices being on the same network. Restarting the internet connection on the receiver seemed to fix this.

Finally, the VSX-933 also includes voice control support through Google Assistant-enabled devices like the Google Home speaker. Alexa compatibility, however, is not included.

As an entry-level 7.2-channel receiver, the Pioneer VSX-933 includes an impressive assortment of features, offering great Dolby Atmos and DTS:X performance along with a nice selection of streaming options. And at a current MSRP of $479, the unit is competitively priced against other 2018 models in its class.

With that said, there are some 2017 receivers still available from several manufacturers with very similar specs for less. In fact, there's a listing for Pioneer's own VSX-932 on Amazon right now for just $288 -- though it does lose 2 extra HDMI inputs and Zone 2 support.

But for users who want a current 7.2-channel model with great immersive audio support and all the latest bells and whistles, the VSX-933 is Recommended.