Overview - It may have only 2.1 channels, but the Sony HT-X9000F Sound Bar with wireless subwoofer packs a potent punch. With Dolby Atmos and DTS:X support, 4K pass-through, and enhanced by Sony’s powerful Vertical Surround Engine, this sleek, compact unit brings 4K UHD and standard Blu-ray discs, cable/satellite movies, and streaming content to brilliant life. Music playback via Bluetooth doesn’t sound as good as it should and limited connectivity and no rear speaker support may cramp your style, but if you’re a movie maven on a budget seeking a quality piece of equipment, the HT-X9000F just might be your ticket to cinematic bliss.

Back in July, I reviewed Sony's HT-Z9F 3.1 Channel Dolby Atmos/DTS:X Sound Bar, and it impressed me with its power, depth of tone, and Vertical Surround Engine, which significantly brightens Dolby Atmos and DTS:X soundtracks. Yet its close to $900 price tag (which could balloon to almost $1,200 with the purchase of the accompanying - and highly recommended - wireless rear speakers) surely put off many consumers looking for a more affordable option. Enter Sony's HT-X9000F, an attractive 2.1 channel alternative that offers many of the same bells and whistles as the HT-Z9F at nearly half the cost. Currently selling for just under $500, the HT-X9000F provides the same Dolby Atmos and DTS:X support, 4K pass-through, plenty of wattage, the coveted Vertical Surround Engine, a sleek design, Bluetooth connectivity, and a hefty subwoofer that's almost identical to the one that comes with the HT-Z9F. That's a nice package, and though the audio quality for music doesn't compare to the HT-Z9F and the inability to add rear speakers prohibits the building of a true multi-channel system (and might be a deal breaker for some), Sony's HT-X9000F scores big when it comes to what most home theater enthusiasts care about most: full, enveloping, and nuanced sound for 4K UHD and Blu-ray movies. 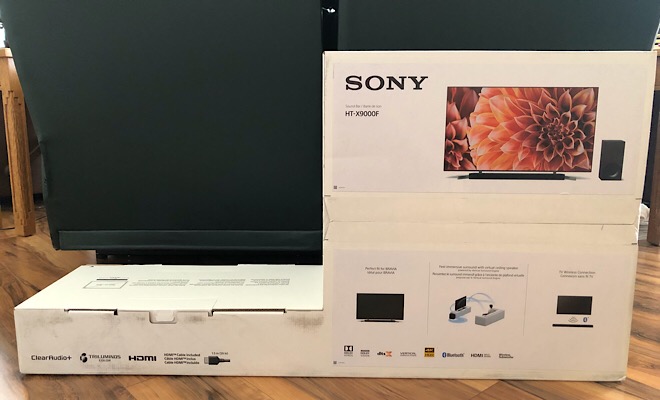 The HT-X9000F comes in an odd-shaped box that's actually quite cleverly designed with a strategically placed flap that enables easy transport of the cumbersome unit. Unpacking is easy. The box contains the low-profile soundbar, which measures 36-1/2" x 3-1/2" x 2-1/2", a compact size that allows it to fit unobtrusively in front of almost any TV; the subwoofer, which measures 7-1/2" x 15" x 15-1/4"; remote control with two AAA batteries; a Premium High-Speed HDMI cable with Ethernet; a wall-mount template; complete manual; and fold-out start-up guide. The HT-X9000F boasts 300 watts of power, which is more than enough to fill most rooms (and is just 100 watts less than the HT-Z9F), and 2.1 channels (the HT-Z9F has 3.1 channels). The HT-X9000F doesn't have a designated center channel for dialogue, but there is a "Voice" button on the remote that can boost dialogue levels to make the spoken word more discernible amid the bombastic effects of action, war, and sci-fi movies. The unit also isn't Wifi capable, so you can't connect directly to Internet music services or download software updates, which, as a result, must be transferred from the Sony website onto a memory stick and installed via USB. A bit of a pain, to say the least.

The back of the unit features only one HDMI input, which really isn't enough these days, considering most people have a cable/satellite receiver, Blu-ray player, and streaming box. That's a bummer. On the plus side, however, the HDMI out jack is ARC compatible, so you can hook up multiple components to your TV and still enjoy the audio through the soundbar. (The only hiccup with that setup is that the HT-X9000F's on-screen display that allows you to easily tweak settings on the unit, only shows up when using the HDMI input. There is no LED display on the unit itself, which makes some adjustments, like audio sync, difficult to make when using HDMI-ARC.) There's also one optical input, one analog input, and one USB port. My only gripe with the design is that the HDMI jacks are recessed and positioned at an angle, which makes connecting the cables somewhat awkward. Otherwise, the HT-X9000F looks quite sleek and blends in well with other equipment.

Setup is a snap. Just plug in the soundbar and subwoofer, connect the HDMI cables, enable the HDMI-ARC setting on your TV, and you're up and running. The wireless subwoofer instantly paired with the soundbar and Bluetooth connectivity was simple and painless. I did have one hiccup when I tried to connect the soundbar; the HDMI cable that came with the unit did not work with my LG OLED 65E6P TV. When I switched to a different high-speed cable, the sound played instantly. Advanced settings, which pop up when you hit the Home button on the remote and then click on Setup, allow you to configure the distance of your speakers, change speaker levels, play test tones, and tinker with various audio, HDMI, Bluetooth, and system settings. The comprehensive remote also provides seamless navigation, enabling viewers to switch inputs, select various sound modes (Auto Sound [which automatically detects the type of content you're listening to and adjusts the soundbar accordingly], Cinema, Music, Game, News, Sports, and Standard), turn the Vertical Surround Engine on and off, raise the subwoofer and voice volume, display audio output, and change the audio sync. Like the HT-Z9F, there's no way to adjust the treble settings, which is unfortunate. Though the buttons on the remote are small and difficult to manipulate in the dark, its functionality is quite good.

I expected the HT-X9000F to pale in comparison to the more expensive and powerful HT-Z9F, but I was pleasantly surprised by its sound quality, especially when it came to outputting high-definition Blu-ray soundtracks. The HT-X9000F may only have two channels, but thanks to the excellent Vertical Surround Engine (which must be engaged to fully experience the soundbar's capabilities), it often sounds like a complete multi-channel system. Of course, you won't hear distinct directionality from all corners of the room because there are no rear speakers, but the HT-X9000F does a terrific job of simulating the surround experience. The sound is very enveloping, with even overhead Atmos effects coming through more palpably than I anticipated. Effects swirl around you in a natural manner, the subwoofer pumps out potent bass, tones are generally rich and full, and dialogue is properly prioritized. The Voice boost feature subtly enhances conversations so they're more comprehendible without throwing the balance out of whack, and the multiple sound modes nicely complement their assigned subjects.

I put the HT-X9000F through its paces with many of the same 4K UHD Blu-ray discs I used for my review of the HT-Z9F, and the results were quite similar. I began with the combat scenes of Hacksaw Ridge, and the HT-X9000F proved it was up to every task. Did I miss the rear speakers, which allow gunfire and explosions to ignite from the sides and back of the room? Yes, but not as much as I thought I would. Without them, the audio was anchored up front, but wafted beautifully around the listening area. I still felt immersed in the action and the visceral impact of each detonation and flurry of bullets. Dynamic range was excellent, distortion was completely absent, and the music score soared. The Atmos effects were somewhat muted (the high ceilings in the room certainly didn't provide the optimal Atmos atmosphere), but noticeable nonetheless. Such effects were much more imposing when I popped in Fantastic Beasts and Where to Find Them. As the creatures swooped and swirled through the city and bolts of magic ricocheted off buildings, the HT-X9000F created an exciting and enveloping soundscape that thrust me into the world of wizards and strange creatures. 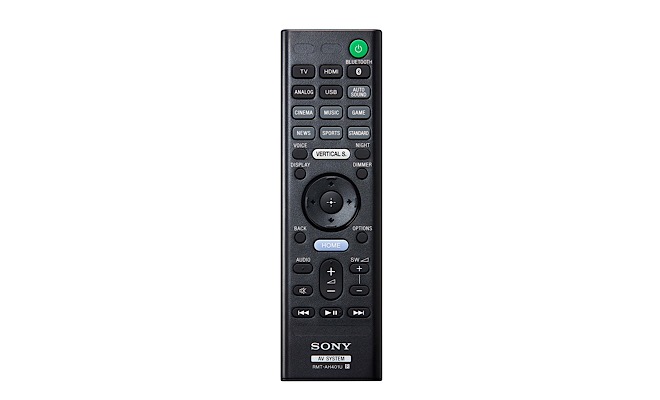 But forget all the bombast. The HT-X9000F embraces subtleties, too. The eerie atmosphere of creaks, drips, rustling brush, trepidatious footsteps, and gushy undulations created by Ridley Scott in Alien Covenant came across quite well. The DTS:X track of The Fate of the Furious is anything but subtle, and all the rumbles, screeches, revving engines, shattering glass, and crumpling metal came through with crystal clarity. Even Charlize Theron’s insidious whispers didn’t get drowned out by all the noise.

Streaming content from Netflix via Apple TV played smoothly and exuded the same level of fidelity. I decided to sample a bit of the History of the Eagles documentary, and the classic vocal harmonies, organic guitar riffs, and weighty drums all sounded rich, full, and well modulated. Movies on HBO and Showtime broadcast through my DirecTV receiver also sounded expansive, warm, and nuanced.

The one area where I found the HT-X9000F lacking was its playback of music via Bluetooth. While I applauded the HT-Z9F for the quality of its music reproduction, I found the HT-X9000F to be deficient in this regard. A slight tinniness and overabundance of treble afflicted the songs I played, and sadly, there are no controls to adjust these settings. The surround qualities that so wonderfully enhanced the soundtracks of Blu-ray discs didn't seem to do anything for the music, so if, in addition to TV-based viewing, you're looking for this soundbar to satisfy a good deal of your music needs, I might look for a player with stronger musical chops and Wifi capability to enable direct connection to streaming services. The HT-X9000F does movies proud, but music? Not so much.

If you're looking for an affordable, mid-range soundbar with both Dolby Atmos and DTS:X support that outputs high-quality audio for 4K UHD and standard Blu-ray discs, cable and satellite TV, and streaming content, Sony's 2.1-channel HT-X9000F should more than satisfy your needs. The unit is attractively styled, compact, comes with a potent wireless subwoofer, and features Sony's Vertical Surround Engine, which expands the soundscape to make two channels sound like multiple channels. Atmos effects won't bowl you over, but the HT-X9000F - without the aid of upward-firing speakers - provides a palpable Atmos flavor. Several sound modes give listeners plenty of flexibility and an easy setup makes installation a snap. Music playback via Bluetooth was a big disappointment, as well as the inability to add rear speakers, adjust treble levels, connect more than one A/V component, or access Internet music services. If you want all those bells and whistles, then a higher end system like Sony's HT-Z9F might be a better option. The HT-X9000F isn't perfect, but it puts movie lovers on a budget in the thick of cinematic action with the illusion of multi-channel sound that greatly enhances the viewing experience. In its price class, it's a tough bar to beat. Recommended.