Overview - If you're looking for an ultra portable projector that has a ton of features and don't want to break the bank, then look no further than the Optoma IntelliGO S1. Weighing only 1 pound and fitting entirely in the palm of your hand, this sleek and easy-to-use projector has what you want when on the go. You can hook up your favorite video game system, streaming device, or a Blu-ray player to this unit and watch your favorite programming.

With multiple inputs, wireless and 3D capabilities, as well as Optoma's own media center, which you can control from your Android device, it's hard not to like this unit. It also comes complete with cables, including an HDMI cable, remote, internal speakers, and a fancy carrying case - all for the low price of under $350. This won't replace your high-end projector or television, but if you want to travel with your own projector on vacation or simply have an impromtu screening in your backyard, this is a noteworthy and easy-to-use projector with DLP technology.

When looking through the vast majority of options to watch your favorite movies or Netflix shows on, or even play the latest video game of Sea of Thieves, you can choose a television or projector. Both have their pros and cons for sure, but with the ever-changing technology, the projector is gaining steam every day with better image quality and functionality for those who want something larger than a 75 inch screen. If you're looking for a screen size of 100 inches to 300 inches, a projector is the way to go.

As time passes, we see better projectors with better LED lights, bulbs, inputs, and quieter fans. When talking about this new Optoma IntelliGO S1, portable perfection are the two words that come to mind. There always comes a time when you want to go to a friend's house for a party of some sorts, a wedding, or even just put on a movie in your own backyard, but it seems like a hassle to bring a giant piece of equipment with you and set it all up.

The Optoma IntelliGO S1 completely rectifies that situation as the unit is the size of your hand and weighs less than a pound. It also has the inputs you'd want as well to watch your favorite films and TV shows, along with wireless capability, streaming options, and audio speakers. As I dive into the details with this unit and it's relatively low price point, you'll easily see why this projector is a winner for those who want a small and portable projector that is easy to use and comes with everything they could possibly want.

This little projector looks sleek and neat all around and has DLP technology, 3D capable, is wireless, and much more. It has 500 lumens and 15,000:1 contrast ratio, and has a 20,000 hour RGB LED light source that powers the image. The device weights 1 pound and is 6.2" x 4.72" x 1.22" inches, which is about the size of your hand or an XBOX One controller. The look of the unit has a dark gray hard matte plastic look that can be easily confused with a fine metal. It's not a cheap plastic whatsoever. The bottom half is matte black. On top of the projector, there are a series of touch sensitive buttons that include the cursors, enter, the menu and back buttons. There are cooling vents located on the sides and front of the projector to give it a quiet sound.

On the bottom of the projector, you'll find a little one-inch foldable stand along with a place to screw the projector to your ceiling if need be. On one side of the projector, you'll find the sleek silver power-on button, with the other side having a focus scroll for the lens. The back of the unit comes with a variety of inputs. You'll have the power source, a USB 2.0, USB 3.0, HDMI, ethernet, audio video jack, and headphone jack for all your viewing needs. Yes, that means you can hook up your AppleTV, a blu-ray player, or even your XBOX One anywhere and get a great image projected on a huge screen or wall. These ports can handle HD video, MHL, and 3D video. Oh yes, there is also a micro SD card slot if you care to look at videos or images from that source, too. You can connect this projector to your mobile devices via Bluetooth and even connect to WiFi.

The internal speaker is not incredibly loud, but does the job in a quieter setting. If you want to hook up external speakers, you can with the audio output jack mentioned above or connect wireless speakers via Bluetooth. The remote control is a black plastic device about as long as the projector itself that has settings, 3D, Home, cursor, and volume buttons. In addition to all of this, the projector comes with its own amazing carrying case, which is smaller than most purses. If that weren't enough, the  IntelliGO S1 also comes with the power cable, RCA adapter, and even an HDMI cable, along with instructions. It's a super nice carrying case that protects all elements of the projector. I was highly impressed. 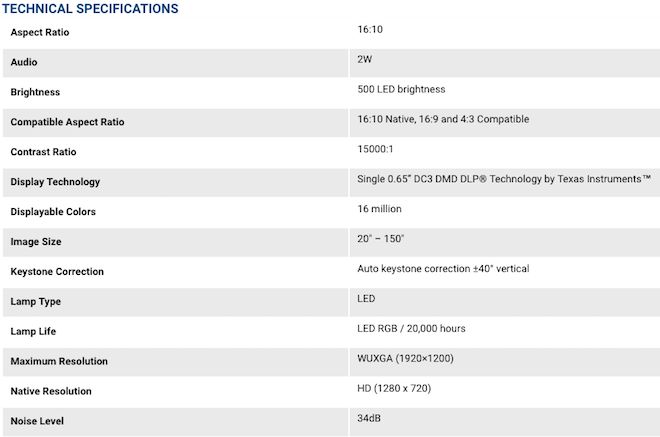 How does this Optoma IntelliGO S1 with DLP look when watching films and playing video games? Well, it looks amazing on every level, given the portable aspect and not being true 1080p or 4K. If you are wanting these aspects in other portable projectors, you'll have to pay quite a bit more than this unit.

I popped in the new I Tonya Blu-ray and I was completely satisfied. The detail is sharp and vivid in each scene with a great layer of grain throughout. It gives the movie and story that filmic quality that adds a ton of depth into each moment and physical scene. This is something we don’t usually get with the highly glossy images. Facial features, such as pores, makeup blemishes, wrinkles, and individual hairs look incredible in all lighting conditions as well. The colors are well balanced and bold throughout, even if some of the scenes have a darker ambient lighting to it, like if it was made on a home video camera. It’s all part of the style of the film and it’s highly effective. The black levels are deep and inky and the skin tones are always natural. Blown up to 100 inches, the image never went soft or blurry whatsoever.

I also put in Manhattan Murder Mystery on Blu-ray to see how an older film looked on the projector and, once again, I was satisfied. The image looks spectacular here, while keeping its excellent filmic quality. There is no digital sheen, which is nice. The depth of the cityscapes and skyscrapers of New York come to life as well. Colors are bold and striking in exterior shots of the streets of the Big Apple where all bright primary colors stand out. Inside the apartments, things have a warmer color tone with browns, reds, and greens. It’s very inviting for sure. Black levels are mostly deep and inky and the skin tones are very natural. The detail is sharp and vivid that showcases individual hairs and facial lines on the actor’s faces, while wider shots never go soft. 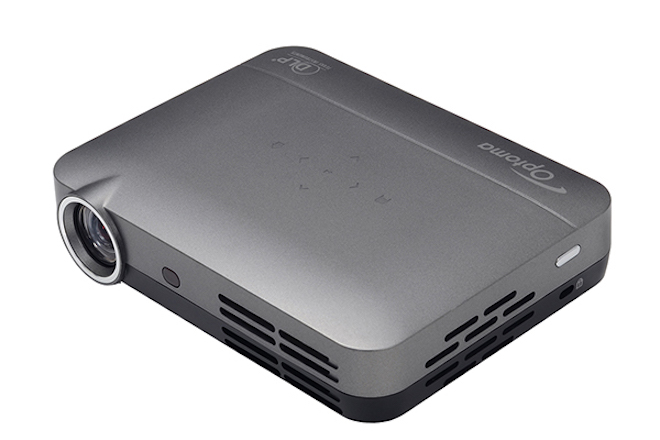 I wanted to check a 3D option out, however you'll have to purchase Optoma DLP sync glasses to view the 3D. That being said, the 3D fad is going out of style and I imagine not a lot of people will use this option.

Hooking up my AppleTV and signing into the WWE app, I watched the recent Wrestlemania 34 event on this projector and enjoyed every minute of it. The streaming never blurred or pixelated out when I had it running thru WiFi, nor did it stall. With all of the fireworks, confetti and array of lights going on and off throughout the night, the pixelation was only slight, given the giant image and amount of information on the screen. The wrestlers facial details all looked detailed and well lit while the millions of colors of costumes and crowds in the background lit up the depth of field. When the Undertaker came out with the intense fog machines, the smoke never really pixelated, but stayed true and detailed. It was quite fantastic.

I also plugged in my XBOX One and played a bit of Sea of Thieves on the projector, which looked very good. The motion was fluid and smooth and there wasn't a ton of lag. In fact, it was easier to play on this projector than on an LED television set. Colors popped and detail in the animation such as the waves and water still looked incredible. I was impressed to say the least.

In addition to these hookups, you can connect wirelessly to a number of apps for video and audio. If you use Android products, this projector will sync up nicely, however if you use iOS products from Apple, you'll have a hard time. Still, you can connect to Netflix , Hulu, and even Amazon Music or Pandora to stream video and audio, which all worked very well with no issues. All of this is accessible from the Home Menu, which is set up like a media center.

The Optoma IntelliGO S1 is one of those rare projectors that is completely portable and under one pound that comes with all the necessary inputs, wireless, 3D, and streaming capabilities, as well as a carrying case and an HDMI cable amongst other goodies. For it's price point, you can't beat this projector, however not being in 4K or true 1080p is somewhat of an issue, since the market is going that way right now. That being said, the price is relatively inexpensive for all you get here. It's easy to use, sleek, and quite powerful. If you're looking for an ultra small projector that comes with a ton of perks, this is the one to get if you don't want to break the bank. Highly Recommended!

Sale Price 799
Buy Now
3rd Party 799
In Stock.
See what people are saying about this story or others
See Comments in Forum
Previous Next