Overview – Perfect for music enthusiasts looking for a simple yet feature-rich stereo receiver, the Yamaha R-N303 offers a nice array of wired and wireless connectivity options, along with great hi-res audio performance. With that said, the absence of a dedicated subwoofer out and the unit's lack of more advanced setup tools like YPAO calibration, do limit some of its appeal.

Still, this is a very worthy model for customers in the market for an entry-level 2-channel receiver to set up in a secondary room, or for users who really only want a dedicated network-capable music solution without breaking the bank. But if more setup options are needed or home theater use is a primary goal, buyers are better off paying extra for a genuine surround sound receiver or the step-up R-N803.

While a surround sound receiver is an essential component of any proper home theater system, there are some instances when all a user really needs is a good old-fashioned 2-channel solution. If music is your main concern or you already have a fancy 9.1.4 Dolby Atmos configuration in another room, a decent stereo amp can likely cover most of your audio needs and then some.

Backed by solid power and packed with convenient wireless options without neglecting old-school wired connectivity, Yamaha's R-N303 Network Stereo Receiver is designed to do just that for right under $300. Add in support for the company's MusicCast multi-room platform, and you come away with a stereo receiver that does far more than simply power speakers, offering a genuine music hub that's designed for a plethora of sources from vinyl to hi-res streaming. 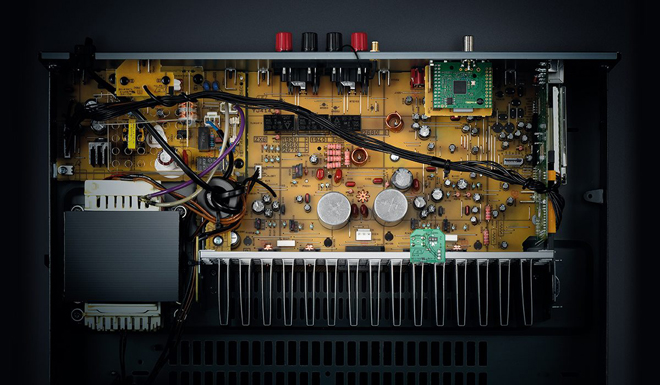 Additional connectivity options located on the rear include three standard RCA inputs, a dedicated phono input, a coaxial input, an optical input, an Ethernet port, and an RCA out. Likewise, the unit also features an antenna for Wi-Fi, along with Bluetooth, AirPlay, and DLNA 1.5 compatibility. Playback support is provided for MP3, WMA, and MPEG4 AAC, along with hi-res formats like DSD 5.6 MHz, FLAC, WAV, AIFF 192 kHz/24-bit, and Apple Lossless 96 kHz/24-bit. An FM/AM tuner is integrated as well, leaving HDMI and a USB input the only major omissions. The former isn't really expected on a 2-channel receiver, but the latter would have been a welcomed inclusion in order to play tracks off of a flash drive.

Meanwhile, the front panel of the receiver boasts a simple LED text screen that displays relevant playback and setup info, along with a power button, a headphone out, speaker A and B buttons, bass and treble functions, input selection, a volume knob, and a few other assorted functions. In addition, the package comes with a silver remote with an appropriate array of controls, though I do wish bass and treble buttons were also featured on the remote itself.

After connecting left and right speakers to the back terminals and plugging in any other desired wired components, initial setup is very straightforward. Upon booting the system, I was able to painlessly connect my Wi-Fi router to the receiver using the simple WPS push button option. If your router doesn't support WPS, the device also allows users to configure the receiver's Wi-Fi via the MusicCast Controller app or from an iOS mobile device. If those aren't options, manual setup is also possible using the remote and LED screen, but this is rather tedious and is best avoided if possible.

Once Wi-Fi is figured out, there's not much left to play around with. Designed with simplicity in mind, the R-N303 does not offer any advanced calibration options. In fact, the only real audio adjustments available are volume, left and right balance, treble, and bass. Though this leads to a convenient plug-and-play quality, some users might miss the additional options and EQ features found on other step-up models and surround sound receivers. 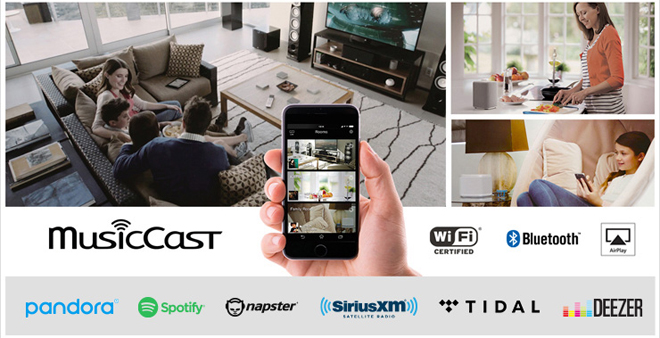 To access the system's various streaming services over Wi-Fi, customers will need to download the MusicCast controller app for their mobile device. From there, users can choose a location and room for the receiver, allowing the device to join an existing Yamaha MusicCast ecosystem if you have other compatible products. Likewise, the app offers access to any music files that might be stored on your phone, along with integrated playback for Tidal, Pandora, Napster, Deezer, SiriusXM Internet, and thousands of internet stations. Spotify is supported as well, but customers need to launch that app separately and use Spotify Connect to pair with the receiver.

In general, playback through the app works fine, though there was some notable lag when navigating and searching for content in Tidal. Likewise, delays also occurred when accessing internet radio stations using the standard remote control and LED display. Thankfully, these minor hiccups didn't prove to be a major issue over time.

Finally, users can also pair a compatible device to the receiver via Bluetooth by switching to the Bluetooth input and locating the receiver on their phone, tablet, or computer. Overall, pairing with my Galaxy S7 was quick and painless, but there was one instance when the connection was lost and could only be reestablished after restarting the receiver.

In general, playback was essentially problem-free with a full-bodied sound marked by great range, ample power, and no real issues to speak of as I sampled numerous tracks from artists like Norah Jones, Radiohead, The Beatles, Cardi B, The Eagles, Gnarls Barkley, Demi Lovato, Arianna Grande, Daft Punk, Beach House, Aur Revoir Simone, and -- cue shameless plug for my girlfriend's group -- Ménage à Trois. Frequencies blended well while emphasizing different layers of audio throughout all the songs, providing clear vocals, clean highs, rich mids, and tight bass -- with respect to the performance capabilities of my speakers, of course.

Hi-res tracks on CD or over Wi-Fi predictably offered the strongest fidelity and range, but MP3 playback was solid as well and Bluetooth quality was surprisingly strong. In both a small bedroom and a larger living room, the receiver allowed my speakers to easily fill the space, providing a balanced, enveloping sound at around the 45 – 55 volume mark depending on the source. Likewise, I detected no notable distortion when pushing the decibels a bit beyond a comfortable listening level.

On the downside, the unit does lack a dedicated subwoofer out, and though not an uncommon omission for stereo receivers, it's still a disappointing exclusion. Even without an actual sub out, however, it should still be possible to connect a subwoofer to the receiver using speaker cables as long as your sub has a high-level or speaker level input. Unfortunately, mine does not, and the absence of a sub did limit overall performance, creating a more restrained sound than I'm used to hearing with the same speakers in a beefier 2.1 configuration when connected to my Onkyo TX-NR555 receiver and subwoofer.

On that note, comparing 2.0 playback on both amps revealed a fairly similar sound, though I did prefer the EQ adjustments made to the sonics on the Onkyo via its acoustic calibration system for most material. In contrast, the Yamaha has no setup mic or calibration process, and though this does result in a less processed sound, acoustic calibration can yield pleasing results when implemented right. Really, this comes down to a matter of personal preference, and even without any room-specific adjustments, the R-N303's music performance was strong with all of the sources I sampled.

Beyond music, I also tested the receiver's movie and TV performance via a Blu-ray player and a Smart TV connected to the device's optical input. Various streaming clips, episodes of Mozart in the Jungle, and a few scenes from Dolby and DTS demo discs all resulted in solid playback, but the lack of a subwoofer and EQ were even more apparent when watching videos, offering a pleasing yet slightly subdued sound. Likewise, the R-N303 does not actually support internal Dolby Digital or DTS decoding, so any sources that are connected to the unit need to be set to output those formats as PCM (most devices have this option) or you won't get any sound at all. Finally, I found that movie playback often needed a bit more volume than music, with a comfortable level hitting around the 60 - 65 mark.

Outside of traditional playback, the MusicCast tech used on the R-N303 also offers multi-room audio support, allowing users to wirelessly add audio in up to 9 additional rooms with other compatible MusicCast speakers and sound bars. And though I didn't have any extra MusicCast gear on hand for this review, I have tested the format with multiple Yamaha speakers in the past, and found it to be quite effective.

In addition, the receiver also features a voice control option via a separate Amazon Alexa-enabled device like an Echo, Dot, Tap, or Show, allowing users to control select functions through spoken commands. Unfortunately, I don't currently own any of those devices so I couldn't test this function myself.

The lack of a dedicated subwoofer out is a disappointment and though the optical input is a nice inclusion, movie and TV performance seem to be a bit of an afterthought. Likewise, the receiver doesn't offer any advanced calibration options so outside of manual treble and bass adjustments you don't have much leeway to fine tune your speakers to suit your specific room.

Still, the comparatively simple, plug-and-play approach here works well, making this an ideal receiver for music playback in a secondary room or as a primary audio hub for users who want a good entry-level network stereo system but have no interest in surround sound. Recommended.

Sale Price 329.95
List Price 349.95
Buy Now
3rd Party 499
Available to ship in 1-2 days.
See what people are saying about this story or others
See Comments in Forum
Previous Next