High-Def Digest was recently invited to attend a special launch event for Samsung's new 2018 QLED lineup, and as part of the showcase we got to take part in a dedicated series of demos for the flagship Q9F QLED Ultra HD TV. And though a complete in-depth review will have to wait until we can get a bit more time with the display, we're back with some initial impressions based on what we've been able to see so far.

In addition, 75-inch and 88-inch models will also be available, with the first units expected to start shipping later this month. For a full rundown of detailed specs from Samsung, click here.

For the first demo, Samsung highlighted the Q9F's impressive quantum dot color performance and 100% color volume, allowing the set to consistently and accurately display the wide P3 color gamut at a variety of luminance levels. The Q9F was placed above an OLED set during the demonstration with each display showcasing a clip of a colorful toy train. 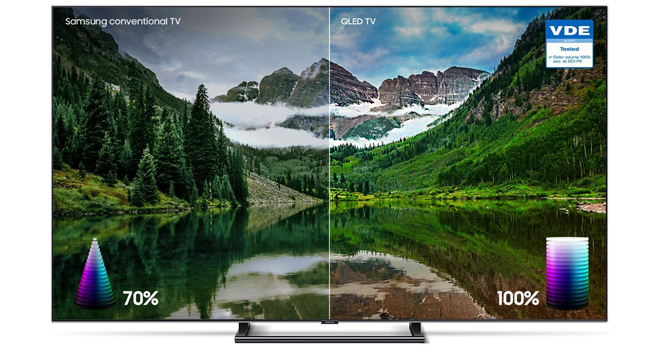 Right off the bat, the QLED set's colors had a noticeably brighter and more naturally vibrant appearance while the OLED had a comparatively cooler/teal cast to it (something I've noticed in other head-to-head demonstrations as well). Likewise, there was slightly more detail visible within some of the primary hues on the Samsung.

Most telling of all, however, was the color accuracy in the background of the scene. The floor the train was stationed on used a specific shade of yellow and Samsung actually had the exact color on a physical swatch lit up right next to the TV. Placed side-by-side, the swatch and the yellow on the TV looked nearly identical. Meanwhile, the same swatch placed next to the OLED once again revealed a distinctly cooler cast that did not represent how the color looked in real life.

In the next match-up, Samsung focused on the TV's HDR10 and HDR10+ performance. Once again, the Q9F was placed above an OLED set. This time, both units played back a demo reel with a sunset, a car garage with bright reflections, and cityscapes with the sun glistening off of buildings. The Samsung presented the scene using the new dynamic HDR10+ format while the OLED used the standard HDR10 format. 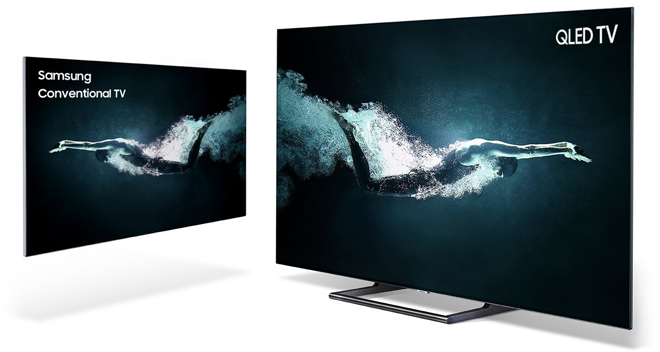 Though both displays looked quite good with nice specular highlights, the HDR10+ presentation was able to reveal some subtle but still noticeable improvements in intensity and detail during specific shots compared to the OLED. Likewise, to further demonstrate the differences between HDR10 and HDR10+, we were able to switch between the two formats on the fly on the Q9F alone. Pausing on a shot with the sun in the background when in HDR10+ mode allowed us to make out the circular shape of the sun within the bright highlight. Meanwhile, switching to standard HDR10 washed out the circle and turned the highlight into a less distinct bright spot.

Sadly, while HDR10+ did look great on the Q9F, the TV does not offer support for the similar competing Dolby Vision format. On that note, however, our Editor-in-Chief Michael S. Palmer got to see a similar demo back at CES that also included a direct comparison clip of Pan in HDR10+ on the Samsung and Dolby Vision on the OLED.  Color volume performance may have been more of a factor than the actual HDR method, but the resulting image was brighter and more lifelike on the Samsung (especially the clouds), while the Dolby Vision imagery on the OLED had a bit of a blue tint.

Finally, for the last demo, Samsung showed off the Q9F's movie performance in a completely dark room, highlighting the set's impressive Full Array Local Dimming -- a very welcomed addition to this year's model that was sorely missing from Samsung's 2017 display lineup. This feature uses a panel of controllable backlight zones to offer superior black levels and contrast.

For comparisons sake, the 2018 Q9F was placed alongside an OLED, a 2017 edge-lit Q9F, and a 2017 Full Array set from a competitor. All of the displays ran through a series of HDR clips from La La Land, Guardians of the Galaxy Vol. 2, and Planet Earth II. 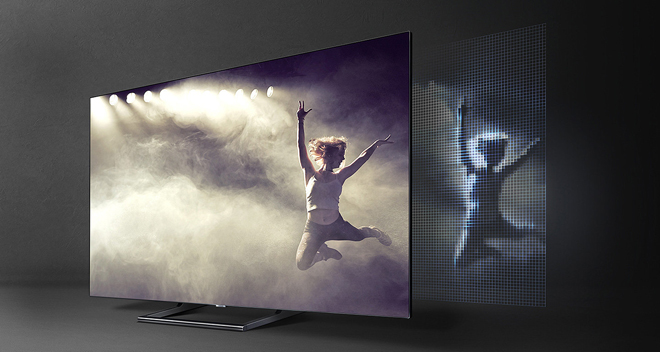 In general, the 2018 Q9F looked simply amazing, offering deep, inky contrast while also managing to have the brightest HDR highlights in the group. At the same time, the Q9F's implementation of local dimming seemed to actually rival the OLED's perfect black levels. Likewise, color reproduction often looked a little more vibrant and natural thanks to the superior quantum dot color volume.

The pitch black background in the La La Land scene disappeared into the room, while the spotlight on the characters lit the shot with precision and no noticeable blooming. Guardians of the Galaxy popped nicely thanks to its colorful palette, and Planet Earth II was oozing with detail, even in dark shadows.

Don't get me wrong, the OLED often looked stunning as well, but the equal black levels and extra brightness of the QLED set really did give a bit more oomph to the picture. Meanwhile, the previous generation 2017 Q9F suffered from typical uniformity problems associated with edge-lit panels, and the competing Full Array set looked nice as well but not quite as deep as the Samsung or OLED.

With all that said, the one area where the OLED remained the clear winner was when it came to viewing angles. All of the LCDs washed out when viewed from the side, while the OLED maintained its picture quality a lot better. Still, the 2018 Q9F had better viewing angles than the other LCDs.

Though I didn't get to test out all of the TV's advanced Smart features, Samsung did show off a few cool new options, including Bixby voice control and the TV Plus app that aggregates content from several different services. Likewise, a new Ambient Mode which can display headlines, traffic reports, and weather updates throughout the day when the TV isn't being used was demoed as well. 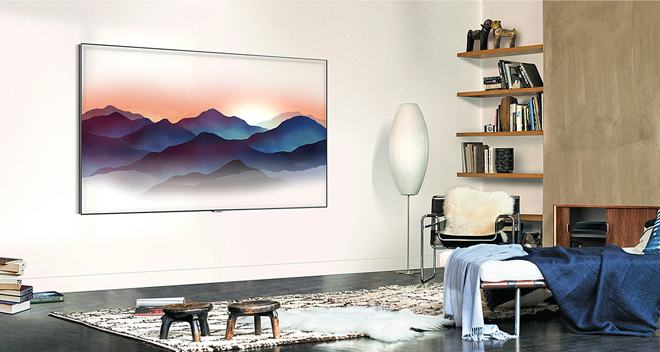 And when the display is wall-mounted, Ambient Mode can even reproduce the appearance of a customer's wall directly on the actual screen, allowing the display to seamlessly blend into a user's room. I got to see this mode in action and it worked exactly as advertised. The TV was hung in front of a brick wall pattern. The Samsung rep simply took a picture of the TV and wall with the SmartThings app. The app then used texture synthesis and color correction to reproduce the look of the wall on the screen itself.

In addition, the SmartThings app can also be used to connect the display to a user's mobile device via Bluetooth, allowing the TV to automatically receive your Wi-Fi settings and login info for compatible apps that you're already signed into on your phone. This "Effortless Login" feature means you don't then have to re-enter all your info for each individual app on the TV.

We'll need a bit more one-on-one time to make a final verdict, but based on the demo, Samsung's 2018 Q9F QLED TV is looking like it could become the flagship display to beat this year (outside of Samsung's own incredible looking and likely incredibly expensive MicroLED Wall TV).

With top-of-the-line color volume performance thanks to its quantum dot LCD panel and some of the most impressive Full Array Local dimming I've seen so far, the display reaches OLED-like black levels without sacrificing high brightness HDR capabilities. Add in some clever and convenient new lifestyle geared Smart TV features, and you get a very compelling premium display package.

Really, the only drawbacks I see so far are the TV's limited viewing angles (solid but still not as good as OLEDs) and the lack of Dolby Vision (though HDR10+ is a great alternative). Likewise, at $3,800 for the 65-inch model, the pricing is definitely on the steep side.

Still, if you can afford it, the 2018 Q9F is a stunner. I attend an annual TV Shootout every year at CE Week in NYC and LG's OLEDs have easily earned the top honors for the last few years.  But with the new Samsung Q9F, I think there might finally be a worthy competitor for the crown. 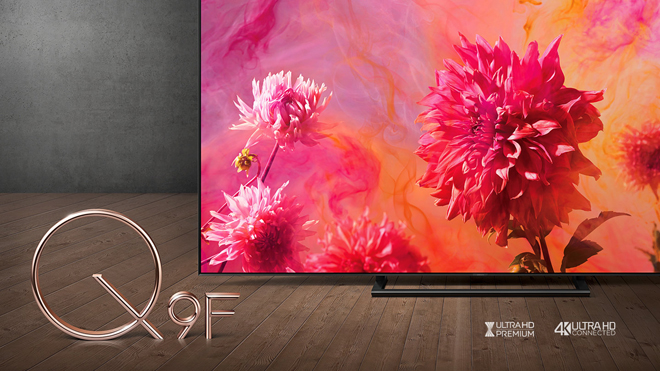 Sale Price 2999.97
Buy Now
3rd Party 2999.97
In Stock.
See what people are saying about this story or others
See Comments in Forum
Previous Next