Overview -- As one of the only Ultra HD Blu-ray disc rental services on the market, Rent4K gives physical media fans access to a growing collection of full quality 4K HDR discs ready to be delivered straight to their mailboxes. Though pricing is a bit on the high side and the service could use some expanded subscription plans, larger disc inventory, and a few website design tweaks, the current pay-as-you rent system works pretty well. For those who prefer discs to streaming, this is a very solid rental option.

Though interest in physical media might be on the decline thanks to the rising popularity of streaming services, the key video and audio benefits of the Ultra HD Blu-ray disc format continue to be an important factor to many home theater enthusiasts -- myself included.

And while purchasing a 4K Ultra HD Blu-ray disc remains as easy as a few clicks online or a trip to one's local Best Buy, renting a 4K disc is an entirely different matter. After all, brick and mortar video stores are essentially extinct now and other disc rental services like Netflix and Redbox don't currently offer 4K titles (though Redbox is reportedly planning to roll out 4K discs to some test markets this year).

In fact, until recently, Ultra HD fans who wanted to rent a title really only had compressed streaming platforms like VUDU, Amazon, and iTunes as an option.

But thankfully, Rent4K is now here to help change that.

Essentially a 4K spin on Netflix's disc-to-mailbox service, the company is one of only two rental platforms (that I'm aware of) offering a growing collection of Ultra HD Blu-ray discs.

In order to use the Rent4K service, new users will need to sign up for an account. To do this, customers simply need to visit the website, click sign in, and then type in their first name, last name, email address, and desired password. After that, you're all set to start browsing titles to rent (address and payment info gets entered during the checkout process for your first disc).

The first is a simple pay-as-you-rent option with each disc costing $6.99. Customers can only have one disc out at a time but there are no late fees. Once you return the disc and it's marked as received by the shipping department, you'll then be able to rent another 4K title for another $6.99.

The second option is a subscribe-and-save plan for $8.99 per month that allows users to rent individual discs for a discounted $1.99 per title. With that said, customers can still only have one movie out at a time.

Both plans feature free shipping but the company currently only sends discs to the US. Shipping times average about 2-4 business days.

Sadly, there is no multiple-disc plan or full monthly subscription plan for renting titles without an extra per disc fee at this time, but hopefully that's something the site will build to as it grows. 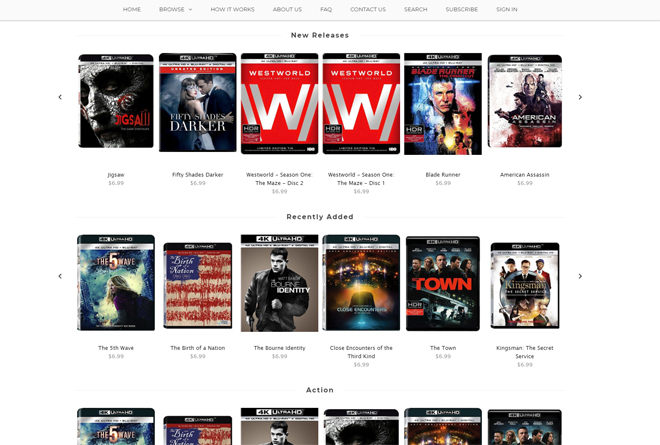 Compared to the $2 cost for standard Redbox Blu-ray rentals or the $3.99 - $7.99 cost for VUDU 4K streaming rentals, Rent4K's plans are a bit on the pricey side -- especially since you have to wait a few days for the title to arrive instead of grabbing it at a local kiosk or streaming instantly.

With that said, those prices are similar to Rent4K's only direct 4K disc renting competitor, 3D Blu-ray Rental. That site charges about $3.99 - $7.99 per disc depending on the title (with late fees after 7 days), along with monthly plans that start at $9 and go as high as $40 depending on how many discs at a time and how many titles you're allowed to rent per month.

Functional yet a bit rough around the edges, the Rent4K site gets the job done, even if some improvements could be made here and there to the overall design and aesthetics.

A top dropdown menu on the homepage allows users to access different categories for rental titles, along with How it Works, About Us, FAQ, Contact Us, Search, Subscribe, and Sign In sections. Likewise, the main page also spotlights a few titles found in some of the more popular categories.

The current library of 4K discs features about 118 titles, including a mixture of films and TV shows. Highlights include recent movies like It, Dunkirk, Spider Man: Homecoming, and Guardians of the Galaxy II; a few classic catalog titles like Blade Runner and Close Encounters of the Third Kind; and TV series like Westworld and Planet Earth II. In all, the selection is very solid, though the library definitely seems to favor newer releases. 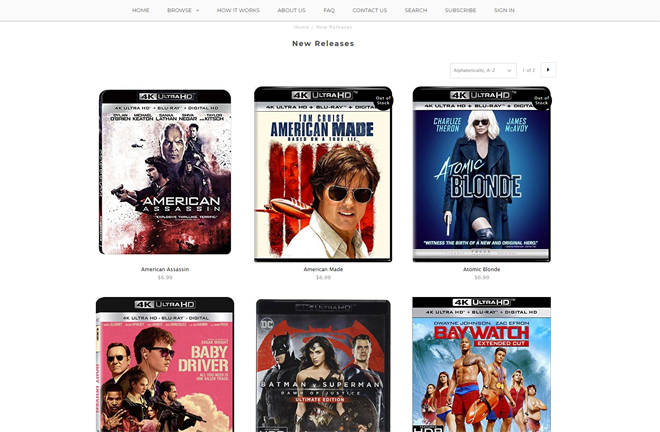 Sadly, however, current stock doesn't seem to be very high for each title. For instance, I wanted to rent Dunkirk as part of my evaluation but the movie was always checked out whenever I looked (over a period of a little more than a month). Thankfully, a recent Facebook post by the company announced a new distribution agreement that is set to triple the site's inventory over the next 30 – 45 days.

Boxart for each disc is then displayed under each category with featured titles displayed first by default. This handy arrangement seems to list discs that are available in stock ahead of titles that are out of stock (an emblem appears on the image for titles that are checked out). With that said, there were times when a few out of stock discs would sneak up in the list for some categories, so it wasn't always completely reliable. In addition, users can also opt to sort the titles by name, date, price, or selling status instead. 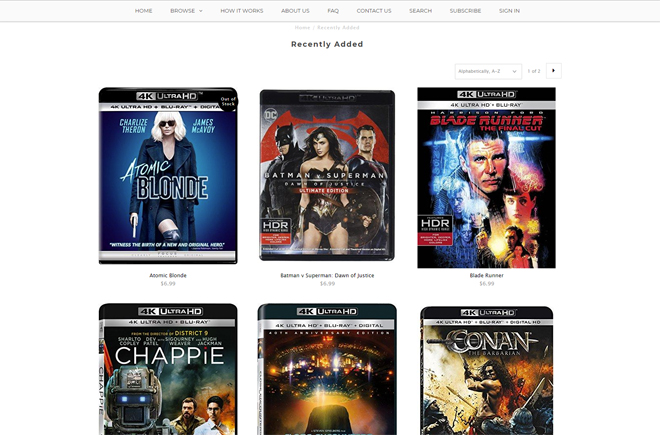 Meanwhile, a helpful Search function is also included that performs well, but only titles (not actors or directors) seem to ping results right now.

For the most part, this organization works just fine, though there are some key shortcomings that I hope are addressed in the future.

First, a simple "Browse All Titles" category would be nice for users who just want to look through the entire collection irrespective of genre. Thankfully, customers can actually access this by opening the search function, leaving the field blank, and hitting enter -- but an actual marked category would be a welcomed addition.

Second, fans of past disc mailing services will no doubt notice the absence of a queue option. As of now, you have to manually select and checkout the next title you want after your previous rental is returned. In the future, a queue option would be a great addition to help users get in line for more popular titles.

Finally, the site's design itself is a little dated and sparse with some missing, low quality, or irregularly sized images here and there. Of course, the service is still in its relatively early stages so these visual nitpicks are mostly forgivable.

For my review, Rent4K was kind enough to provide me with two complimentary rentals, though I was still able to use the regular checkout process in order to test it out.

Eager to get my hands on some full 4K HDR quality discs, I seized the opportunity to catch up on a couple of titles that I missed in theaters. For my first rental, I selected Doug Liman's American Made.

After placing the title in my cart, I simply hit checkout and from there I was able to enter in my shipping and payment information. Rent4K currently accepts a variety of credit cards, and users can also opt to pay via a paypal account. I submitted my order on a Saturday and then I received an email on that following Monday stating that my disc was shipped out over the weekend. That Friday, American Made arrived in my mailbox ready for viewing. 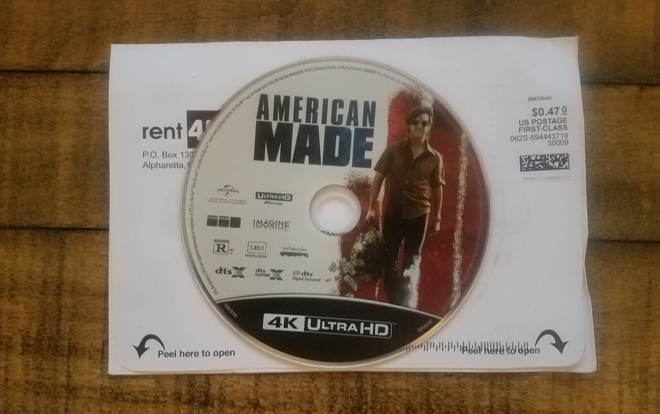 Discs get delivered in a re-sealable two-way mailer very similar to the type of envelopes Netflix uses for its disc mailing service. Thankfully, the disc arrived in perfect shape and played without a hitch.

After keeping the flick for a little over a week, I followed the simple instructions on the envelope, resealed the package and then dropped it off at a mailbox on a Tuesday. That Friday I received an email stating that the title was received and I was now free to rent again. 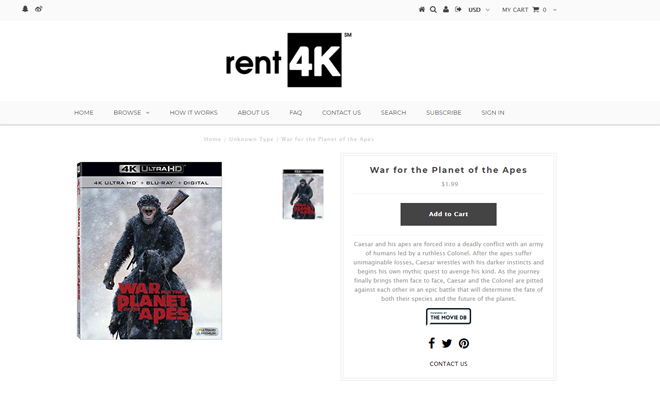 For my next disc, I switched gears from high-flying drug dealers to horse-riding chimpanzees with War for the Planet of the Apes. This time I ordered the disc on a Friday and the checkout process was the same as before -- but the site did not seem to remember my payment info from the last transaction so I had to re-enter my credit card details. After payment, the disc arrived the following Wednesday.

Once again, the movie was delivered in perfect working shape with no issues outside of some slight tearing on the portion of the envelope that gets peeled open to reveal the disc sleeve. With that said, the rip didn't cause any problems.

Overall, the process worked exactly as advertised with arrival and return shipments taking about 3-4 business days and no real concerns to report. It should be noted, however, that since supplements are still usually relegated to the Blu-ray copies included with 4K combo packs, most of the Ultra HD Blu-ray discs you'll receive for rental will be devoid of special features.

For diehard fans of physical media, Rent4K is filling a market need that most other rental services are seemingly neglecting -- and they're doing a pretty good job so far. Though there is some room for improvement in a few key areas, the service is off to a very solid start with a growing selection of titles.

At $6.99 per disc or $8.99 monthly plus $1.99 per disc, the rentals aren't exactly cheap, but prices will hopefully go down a bit as the platform grows. Likewise, the service could definitely use a full subscription plan, a multiple-discs-at-a-time option, queue support, and a few design revisions here and there. Still, the groundwork for a great service is all there and the basic pay-as-you-go one-disc-at-a-time renting works well as it is.

It should be noted, however, that a competing disc rental service called 3D Blu-ray Rental also offers 4K discs for similar pricing (some cheaper, some more expensive and with late fees), along with more subscription plans, but we haven't tried that platform first-hand yet. Likewise, when Redbox does ultimately bring 4K Blu-ray rentals to its kiosks, mail services like this will surely lose some of their luster.

For now, though, supporters of physical media who want to rent full quality 4K HDR Blu-ray discs should not hesitate to try Rent4K out for themselves. Recommended. 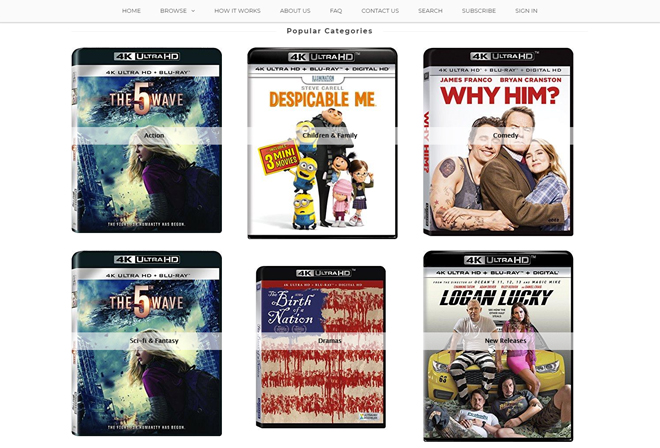 List Price $6.99
Go To Store
See what people are saying about this story or others
See Comments in Forum
Previous Next