Overview -- Save for the stunning-yet-pricey R400b (review HERE), I don't usually look to KEF for subwoofers -- my old PSW2500 suffered from overheating and the Q400b was far too tame -- but all of that changes with the KEF KUBE 12b. This new sub is a sleeper; relatively compact and subtly designed, but it absolutely roars, pressurizing your room with elegantly-deep bass. The only downside is that you won't hear any low frequencies below 22Hz, so if you're an LFE super-nerd: one, you're awesome and, two, you need to look elsewhere. It would also be great to have a wireless option. Still, to my happy ears and rattling walls, the KUBE 12b is a great way to spend $700 to boost a home theater experience. And, at $1,000 less than the R400b, you might as well get two. Highly Recommended.

Meet the KEF KUBE 12b

Make no mistake, the new KEF KUBE 12b is a great subwoofer, especially at this pricepoint and size. 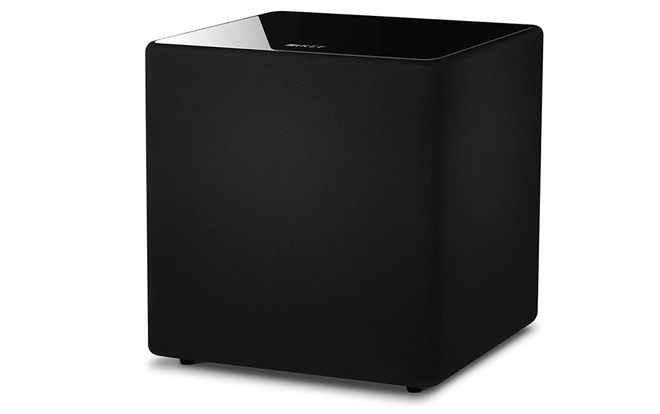 Though it shares the same name as an older KEF sub series, the KUBE 12b, 10b, and 8b have been designed from the ground up. Released late last year and borrowing technology from KEF's Reference 8b Subwoofer, these new KUBE subs feature a sealed cabinet, custom driver, 300W Class D amplifier, three different DSP modes to tune based on room placement, and what KEF calls iBX technology. iBX stands for Intelligent Bass Extension algorithm, which "creates an extended depth that unlocks the full potential of the custom driver. Giving you unparalleled precision and ultimate synchronicity between amplifier, driver and sealed cabinet." That's polished PR speak, of course, but regardless of what KEF calls their engineering wizardry, the 12b is a cracking-good subwoofer.

Check out a full rundown of specs for each model below (taken from KEF.com).

In terms of missing features, I'd love to see KEF offer a wireless kit for this series (or possibly even as a built-in feature), which would expand and extend room-placement possibilities. Also, the 12b is so good I'm curious about what a larger "15b" might sound like if ever developed. 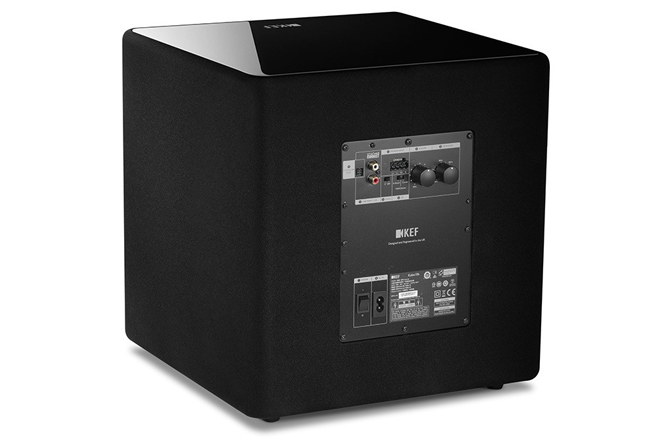 Overall, the KUBE 12b is a handsome subwoofer that almost hides in the room. It is, in some ways, elegant and, in others, invisible. If there's a downside to this approach, KUBE subs are priced to sell with the Q Series, but don't quite match, and the KUBE's glossy/fabric finishes are dust magnets for those who obsess about keeping gear spotless. (Time to buy stock in Swiffer.) That said, the modern KUBES should look great with a variety of KEF and non-KEF speakers.

For the majority of this review, I ran the KEF KUBE 12b with the new the KEF Q Series speakers (full review HERE) in a 7.1.4 Dolby Atmos configuration or a 2.1 stereo configuration pairing the 12b with the Q950 towers. I also added a wireless 12" Klipsch Reference sub (model R-12SWi) for a bit, but the 12b sounded better on its own.

Setting up a subwoofer is equal parts simple and complex. The connections and switches are quick and plug-n-play. I ran an RCA cable from a Denon AV Receiver to the KUBE 12b's (left) RCA input and turned the crossover position to "LFE", then set the volume at 50%, the Phase to 0, and the DSP setting to In-Room or Corner depending on my positioning. Lastly, I tuned the system with the AVR's Audyssey calibration and manually bumped the volume up a few clicks. 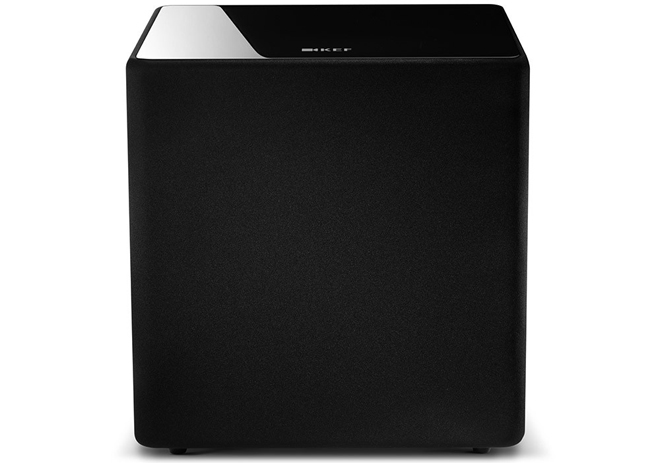 The complexity comes from the way each room pressurizes differently, and whether or not you're running two (or more) subwoofers. Luckily, KEF provides three different in-sub DSP calibrations -- Corner, In-Room, or Wall/Cabinet -- to help tune the sub to its location and this works pretty well too. Though I began with the KUBE 12b closer to a room corner, and that Klipsch sub in the back of the room closer to the opposite corner, the two subs didn't really work well together, so I placed the KUBE 12b dead center in relation to my seating position. Effectively, it was in line with a Q650c Center Channel but in front of my entertainment center shelving. Away from the walls and 6-8 feet away from me, I fell in love with the KUBE 12b.

Elegant. Refined. Creamy. Buttery. Accurate. These are the adjectives I wrote down while trying to evoke, in writing, the feeling of what it's like to hear a KEF KUBE 12b in action.

In my experience, most subwoofers will fill a room, but when lesser models are pushed with higher volumes and deeper tones, they honk and buzz and reveal their location. This is especially true for home theater in a box type systems. When the 12b arrived for review, I was nearly done with my KEF Q Series evaluation and fussing around with a dual 12" Klipsch Reference setup, but those subs fatigue my ears when pushed too hard.

The KUBE 12b is a revelation.

It growls and rolls into LFE curves with ease in ways that remind me of the $1700 KEF R400b. KUBE 12b LFE sounds as natural and heavy in quiet moments as it does in bombastic ones. Blade Runner 2049 is a demonstration worthy 4K Blu-ray for so many reasons, but its Dolby Atmos sound mix features a pulse-pounding score by Hans Zimmer and Benjamin Wallfisch along with gunshots and explosions and thumping crashes. Likewise, Mad Max Fury Road and Pacific Rim boast two of the best  LFE-heavy Dolby Atmos mixes ever released; Fury Road revels in symphonies of guttural engines while Pacific Rim literally roars with screaming monsters and weaponized robots. In both soundtracks, the 12b grunted and pushed me back in my seat. It was glorious. 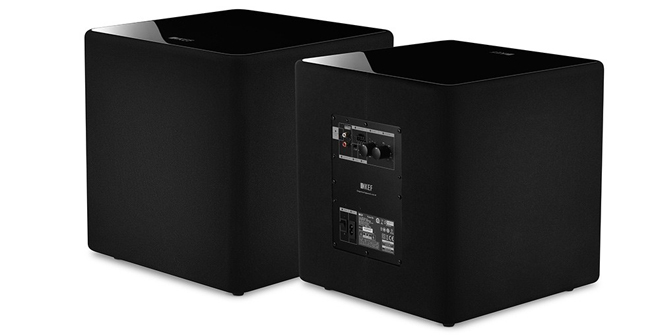 Paired with the Q950 Towers in a 2.1 configuration, the KEF KUBE 12b produces an intoxicating amount of bass for hip-hop, movie soundtracks, and heavy metal. Wrote My Way Out, from The Hamilton Mixtape, might be the perfect Q950/KUBE 12b demo, blending warm mid-tone hook vocals, crisp piano chords, and a chest-thumping beat. With this track, the KUBE 12b pressurized my whole home. Jumping from hip-hop to metal, Black Sabbath's 13 is a monster album that might be the group's heaviest in terms of production and design. Pounding drums and distorted guitars create a wall of heavenly (hellish?) mid to low-end frequencies on the 12b. And, like the movie itself, Hans Zimmer and Benjamin Wallfisch's orchestrations on the Blade Runner 2049 Soundtrack are dynamic and propulsive and evocative. If you want to test out your system's capability, that movie or soundtrack will reveal all strengths and weaknesses.

Despite everything I loved about its tonal qualities and high-end performance, the KUBE 12b isn't perfect. For those looking to get down to 10-15Hz, you're out of luck. And, while playing Blade Runner 2049 and Pacific Rim 4K Blu-rays at ear-bleeding volumes, I did find mild, momentary instances of distortion, but by adjusting the gain on the sub or in my AVR, the problem was manageable.

In that sense, my KUBE 12b komplaints are minor when compared to my enthusiasm. Sure, you can find other subs with MORE earth-shattering, heart-stopping bass, but you're going to spend more money and it'll weigh a lot more. As a compact, relatively affordable option, it's pretty hard to beat the 12b's performance (although here's hoping KEF develops a 15b!). I'd also love to see KEF design an optional (or integrated) wireless system. And then there's the aforementioned dust and design elements -- these don't quite match the Q Series and I found the mirrored and fabric-covered surfaces liked to collect dust quicker than the Q Series.

Outside of the budget-busting (for me, at least) $1700 R400b, I've never been a huge fan of KEF's more affordable subwoofers, but that all changes with the KUBE 12b. Powered by a 300w Class D amp and custom circuitry, the 12b punches above its class and capabilities, producing deep, buttery bass perfect for those who love to FEEL music and movies. That said, for larger rooms or for those who need ultra-low frequency capabilities, you may need a more powerful and/or larger unit. Still, at this price point and with these sonic qualities, the KUBE 12b comes Highly Recommended. And if it's this good alone, imagine a dual setup.

In terms of the other KUBE models -- the 10b and 8b -- I haven't tested them in person so I can't speak to their performance. Given the shared architecture, they should sound similar, tonally, and perform well at all but the lowest frequencies. Still, if you have the room and can afford the $100 or $200 price increase (from the 10b or 8b, respectively), stick with the 12b. It's elegant. It's refined. But make no mistake... it's a beast.

List Price $699.99
Go To Store
See what people are saying about this story or others
See Comments in Forum
Previous Next