As the market continues to be flooded with portable Bluetooth speaker options from big manufacturers and boutique brands alike, picking the right model for you can get a little tricky.

Is your main emphasis on audio quality? Or maybe portability is your focus? Or maybe you want good battery life? Or maybe it's just an attractive price tag you're after?

Well, the VAVA Voom 21 is a pretty worthy solution for all of the above. Though it might not have some of the fancier features or audiophile playback found on some more expensive models, the affordable speaker is a very solid overall performer, especially for its current price of $89.99 -- making it an enticing option for any user who wants a simple Bluetooth speaker without sacrificing general quality.

The VAVA Voom 21 features an oval design with a black matte finish measuring 3.9 x 2.1 X 9.4 inches and weighing in at 1.76 lb, giving it a fairly slick and thin profile for a speaker of this type. And while it's not the most compact model on the market, the device should still fit into most backpacks without a problem for easy portability. A non-removable metal grill wraps around the unit, covering the drivers on the front and back. The package comes complete with a 15V DC power adapter, a micro-USB cable, and a 3.5mm audio cable.

Under the hood, the 20W speaker uses a 70 mm woofer, two 40 mm tweeters, and two 65mm passive radiators. A 6700mAh lithium-ion battery rated for about 10 hours of music playback at mid-level volume is integrated as well. The device includes support for wireless Bluetooth 4.0 playback with aptX audio decoding, and can even pair and switch between two devices at once. In addition, an AUX port for a wired connection to supported playback devices is included on the back of the speaker, along with a USB output, a micro-USB charging port, and a DC charging port. 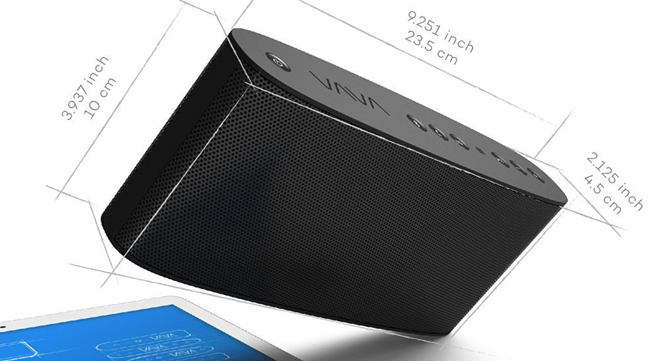 The top of the unit includes a lineup of small, glossy push button controls, including options for Power, Bluetooth, Phone Calls, EQ Modes, Play/Pause, and Volume Up/Down -- covering all of the basics sans a Track Forward/Back button. An NFC zone is also featured for touch pairing with an NFC device. Likewise, three small white indicator lights are also positioned next to the power control to display how much battery is left if a user taps the button (three lights means full charge).

Sadly, there is no similar visual indicator to determine which of the speaker's three EQ modes is being activated. Instead, when one presses the EQ button a "distinct" sound will follow to let you know that a different mode has been toggled. Unfortunately, these sounds are all pretty similar and it's rather hard to tell which specific mode they signify. A simple LED light system would have been a lot more helpful.

Here's a full rundown of specs per VAVA:

To test the VAVA Voom 21's audio playback, I listened to a variety of streaming audio files through services like Spotify, as well as MP3 tracks and hi-res FLAC files via wireless Bluetooth and a wired connection. For wireless playback I paired the speaker with my Samsung Galaxy S7 smartphone, and for wired playback I connected the speaker to my Windows 10 desktop PC.

My review material featured an eclectic assortment of music selections, including songs from artists like Radiohead, Arcade Fire, Gnarls Barkley, Demi Lovato, Outkast, Norah Jones, Drake, Arianna Grande, Pink Floyd, The Beatles, and more. Overall audio quality was quite good, especially for a speaker in the sub $100 range, though there were some limitations here and there. 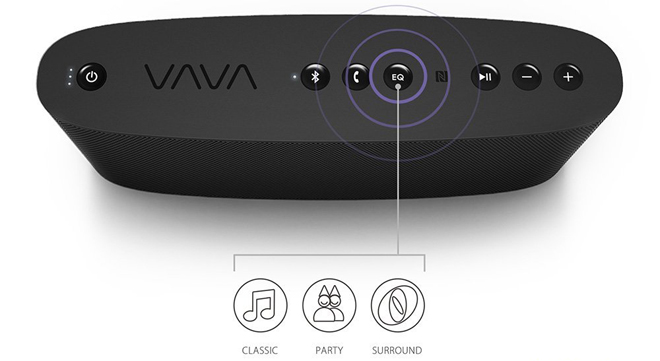 When it comes to EQ modes, the Classic Mode offered the most natural profile with a nice mid-range and decent dynamics for a wide assortment of different musical genres. With that said, I found that this preset could have a comparatively dull quality with some vocals and an overall smaller scope compared to other modes -- especially at lower volumes. In contrast, the Surround Mode offered a surprisingly effective expansion of the soundfield, extending stereo separation quite a bit to the left and right while giving some welcomed breathing room between vocals and instrumentals. At the same time, however, this mode could have a less natural quality, with a slightly echoey reverb effect and an overall brighter profile. Finally, Party Mode seemed to add a bit more kick to the bass while sacrificing balance. In the end, I actually preferred to listen to most tracks with the Surround Mode activated for a more enveloping sound.

Quieter tracks like Norah Jones' "Don't Know Why" carried an appropriately intimate quality while more aggressive songs like Gnarls Barkley's "Crazy" offered some solid bass thanks to the speaker's integrated woofer. Of course, users shouldn't be expecting room-shaking LFE from a tiny Bluetooth speaker like this, but the VAVA Voom 21 definitely made my desk vibrate with its low-end.

And though Bluetooth playback was good in its own right, switching to a wired connection resulted in a more nuanced and deeper sound. There could be a bit of a gap between the mid-range and the highs/lows at times, which made vocals sound a little disconnected from instruments in some tracks, but the overall sonics were pleasing. Doing a few on-the-spot comparisons between the VAVA Voom 21 and a pair of Klipsch desktop speakers that I own revealed some of the portable device's understandable limitations, but while the unit did have a thinner quality compared to my stereo setup, the VAVA Voom 21 did a good job of avoiding the shrill, tinny tone that lesser Bluetooth speakers are plagued by.

Outside of music, I also sampled a few movie clips through the speaker when connected to my computer, including the latest trailers for Star Wars: The Last Jedi and Avengers: Infinity War. Again, Surround Mode proved to be the best for stereo separation and scope, and the little speaker did a solid job of creating an engaging soundscape, though bass definitely felt more lacking with movie content than it did for music. Still, the speaker could make for a decent compact sound bar alternative for a computer if you want to go that route.

Thankfully, pushing the speaker to max volume didn't really reveal any major distortion, and the unit should have ample power for small to mid-size rooms. I've seen some buyers mention a rustling static issue with this model in other reviews online, but while I could hear some very soft background static if I placed my ear to the unit, I didn't hear anything during playback from a normal distance.

Though this is a pretty straightforward Bluetooth speaker, the VAVA Voom 21 does still offer a couple of extra features. Most notably, the device includes an integrated microphone for hands-free calls when connected to a smartphone via Bluetooth. In practice, this option worked well enough, though audio quality through the speaker was a bit muffled. Likewise, one person I called said I sounded very distant and soft (more so than when on a normal speakerphone call), while another caller said I sounded loud and clear on their end. In other words, your mileage might vary here but the feature should get the job done.

Beyond hands-free calling, the device also includes NFC connectivity, allowing users to establish a Bluetooth connection with an NFC enabled device by just tapping the device against the NFC logo on the top panel of the speaker. With NCF activated on my Galaxy S7, this feature worked just as advertised. Instead of pulling up a Bluetooth menu and selecting the VAVA Voom 21, I simply placed the back of my phone against the NFC logo and voila, the two products were connected. 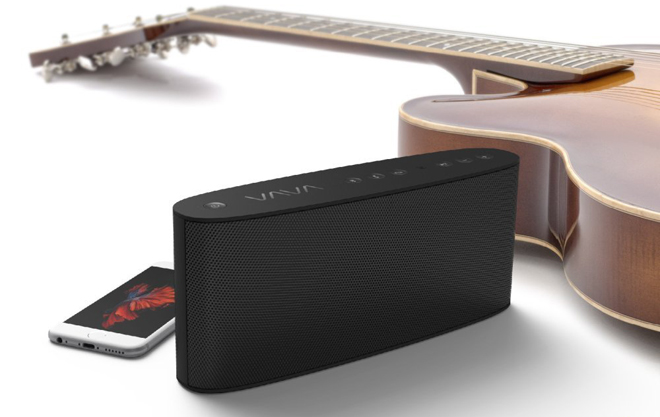 Finally, users can also use the speaker to charge another mobile device by connecting it to the Voom 21's USB port. Once again, this option worked just fine, allowing me to charge my Galaxy S7 from the speaker. This will of course drain the speaker's battery if it's not plugged into the wall, but it's a handy feature to have when on the go and a little extra smartphone juice is needed.

At a current price of $89.99 (for some reason our buy box is showing a list price of $179.99, but Amazon does have it for $89.99), the VAVA Voom 21 Bluetooth Speaker is a fairly strong performer. I've heard higher-end models with more detailed and robust audio performance from companies like RIVA, but for under $100 this unit offers very solid playback quality through Bluetooth wireless or a wired connection.

On the downside, I do wish it was easier to tell which EQ mode is being toggled, and more advanced settings or a dedicated mobile app controller would have been a nice addition. Likewise, though understandable for this price range, Wi-Fi connectivity would have been a very welcomed feature as well. Still, as a simple Bluetooth option, the strengths here definitely outweigh any drawbacks. You might not get truly premium audio quality, but the VAVA Voom avoids the shrill sound associated with some budget-friendly models in this class, offering a worthy option for users looking for a compact household speaker for small to medium-sized rooms or an on-the-go portable solution.