OVERALL
For Fans Only 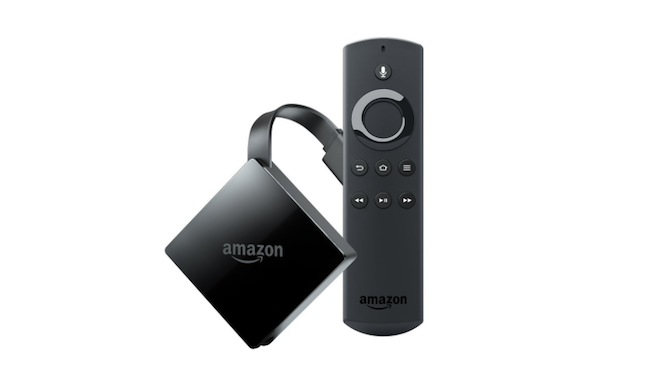 4K is the new hotness. Televisions, players, and streaming devices are now 4K compatible. Amazon is the latest to enter that market with their upgraded Fire TV, which is now referred to as Amazon Fire TV 4K. The unit itself has changed physically and has the Alexa voice-commanded remote. It's relatively cheaper than the competition, but can it stack up to the performance and power of the Apple TV 4K and the Roku 4K? For strict Amazon users, I'm sure you'll take that step into the 4K realm, but if not, you might look elsewhere.

Amazon has done away with the set-top box design that Apple and Roku still use. Instead, Amazon's Fire TV 4K is a 2.6 x 2.6 inch square with that weighs 3.1 ounces with a super short built-in HDMI cable that literally dangles from the back of your receiver or television. You'll never see it as it's hidden behind all of your components. There are no ports or inputs, for a wired internet or USB  connections, save for a power port that you'd connect to a wall outlet. If you want a wired connection, you will have to spend $15 for a special adapter. I'm pretty disappointed in this for sure.

The new Fire TV remote control is the same as previous models, which means there is no infrared signal or TV control buttons. Alexa comes with the remote, but you'll have to press a button every time you use it, which can get annoying. There is a circular navigation system that you have to press down in order to navigate menus, along with a home, back, play/pause, and forward/rewind buttons. In fact, the remote is larger than the actual Fire TV itself and uses two AAA batteries.

Interestingly, this new Fire TV 4K has double the RAM, but a slower processor than its previous unit. Most apps and videos run smoothly, but the heavier and larger apps might act slower when scrolling thru options as I experienced with HBO GO. Setting up is easy as you would just need to sign in to your Amazon Prime account and you're ready to go, along with some of the other apps you might want, such as Netflix or HBO GO. The big difference here is the 4K HDR content, which Amazon highlights on the Home menu screen. This being said, Apple and Roku have done the same thing here, so what makes this Amazon Fire TV the worthy purchase? 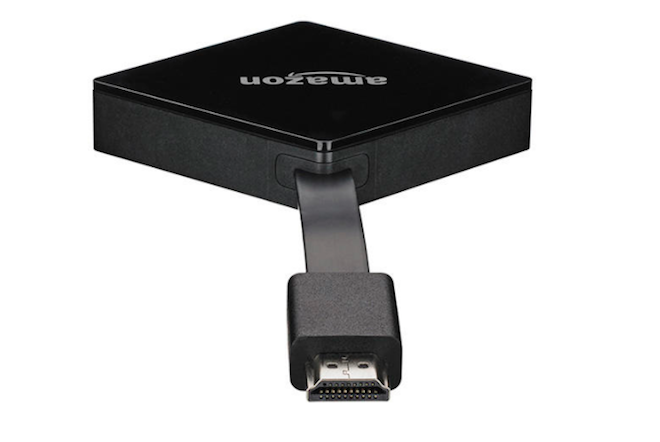 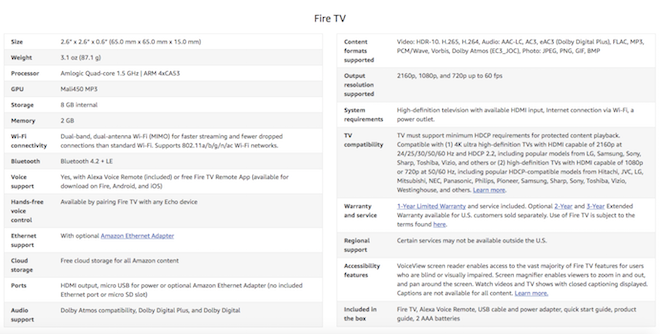 While the Apple TV 4K is super easy to use and navigate, this is not the case with Amazon's Fire TV 4K, which is so upsetting, because it could have been. First off, Amazon makes it a priority to advertise and deliver their own content over anything else without any customization. Netflix and HBO GO have their own long rows of content, but that's it on the home screen. Everything else is Amazon central. In large part, the home screen and every other submenu looks like a hoarders room filled with stuff you don't want. It's super difficult to navigate and redundant. Amazon has also allowed for literal ads in the menus, including vehicles promos and other content that doesn't interest you. A lot of this will take up 40-50% of the screen as you're trying to find movies or television shows to watch.

The whole software interface needs a simpler theme and navigation. If anything should separate the Amazon Fire TV 4K from Apple and Roku devices, it's Alexa, the voice-activated search assistant. Unfortunately, it falls short in all cases. 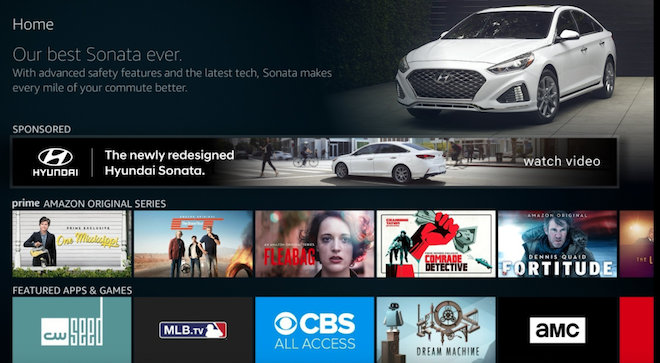 You have to press the button to talk, like the Apple TV, but this is extra annoying considering the Echo doesn't need a button. Still, with the remote, you can search for movies, TV shows, actors, directors, music, and control lights and fans in your home if you have the right smart devices. You can even ask Alexa questions such as, "Who won Best Picture in 1981?" It will answer quickly. You can also check out the local weather forecasts too. If you tell Alexa to "Play" a certain movie, it will launch right into playing the film... as long as it's on Amazon Video. Broader questions and commands don't yield great responses either. If you ask it to show you "horror movies", you'll be unhappy with the selection that won't even really contain horror films and might bring back only two or three selections. Again, this can be updated easily, but hasn't.

On the contrary to this, if you say, Bruce Campbell, it will quickly bring up everything Bruce Campbell has acted in or directed, to which you can scroll thru the long row and play any of it. When choosing a streaming device, you want great connectivity and simple navigation. Amazon Fire TV 4K has good connectivity, but without a wired connection, it can take a little longer for the 4K content to become a stunning visual. Also, it's important to note that the Amazon TV 4K is capable of HDR and Dolby Atmos, but, surprisingly, there's no Atmos and not very much 4K HDR content currently available on the Amazon Fire TV.

In fact, the Apple TV and Roku have a much more robust selection. Apple has upgraded all iTunes purchases to 4K HDR for free, and if you have Vudu, most new releases include the 4K HDR format. This is not available on the Amazon Fire TV, at least yet. If you have the Movies Anywhere service or Vudu, the movies you have in 4K HDR only play in 1080p on the Amazon Fire TV. If you want to watch 4K HDR content, it will have to come from Amazon originals like Transparent or Netflix originals like Glow. The Fire TV also doesn't support Dolby Vision (only HDR10). As mentioned above, Dolby Atmos is possible but thus-far unsupported, so even when you own a Dolby Atmos (or Dolby Vision) title, you're stuck with 5.1 or 7.1 DD+ and SDR or HDR10. 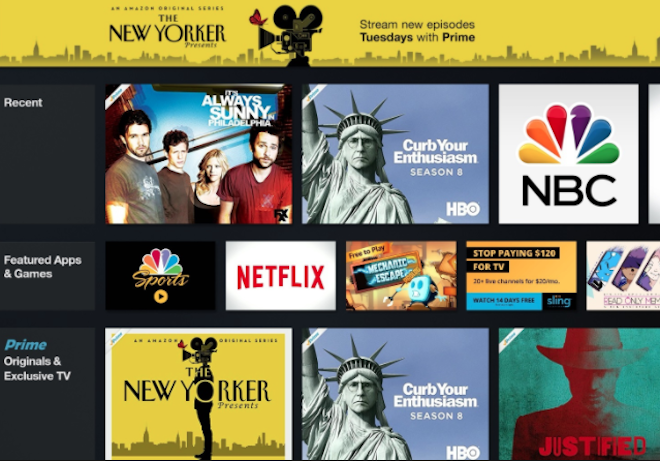 Limited selection aside, Amazon 4K HDR shows look very good on the device. Transparent is a very mellow and dramatic show with a fantasy halo-like glow look to it. The earthy tones of the series really stood out nicely and the many outfits of the transgender performers are rich and deep. The HDR10 really pronounced these colors well. Skin tones looked natural too. Detail with the wireless connection was very good too with all the makeup blemishes, age spots, wrinkles, and individual hairs easily seen at all times. It was a joy to watch for sure. Other content looked great too, but wasn't always in 4K + HDR10. Sure, 1080p looks good, it's not what we signed up for with something that labels itself in the 4K HDR world.

I don't know what Amazon was thinking when they released the Amazon Fire TV 4K. I honestly don't. They released a streaming device that doesn't do as advertised. Sure, it's only $70, which is basically $100 less than the Apple TV 4K, but the Apple TV 4K offers so much more in the way of content, power, and connectivity. I really don't know who would want to purchase the Amazon Fire TV 4K, other than the consumers who are heavily steeped in all Amazon products in their home.

For those who want to watch a lot of movies in 4K or Dolby Atmos, this is not the unit for you, but if you want to watch strictly Amazon content, this might be the streaming device you want for a cheap price. Even then I wouldn't recommend it, because Apple will add Amazon support soon, Roku already supports Amazon, and many 4K HDR TVs boast internal Amazon apps. Also, if you are an Android phone user, you'll be able to upload your Android-only apps to the device. The Amazon Fire TV 4K is more powerful than the Fire Stick and supports 4K HDR video, but mostly for Amazon original shows. If that's all you want in life, then this device is for you. Others should look elsewhere.