-No Dolby Vision support yet

-On the expensive side of 4K players

Samsung came in strong last year with the first 4K UHD player (UBD-K8500) available in the US. It was fast, relatively inexpensive for a first-gen player, and included a ton of streaming apps. Samsung's newest 4K player is the UBD-M9500, which similarly boasts many appreciable features. But the MSRP is still $399.99 and it doesn't support Dolby Vision, 3D, or SACD and DVD-Audio playback.

I know most companies are doing away with the whole 3D aspect, but at this price point, you'd expect it to include these formats for those who still have a collection of 3D Blu-rays. The lack of Dolby Vision support isn't a deal-killer, since the format is still very new without a ton of media options, but in the near future, the lack of Dolby Vision here will annoy customers for sure. Still, with an impressive feature list of options, beautiful color capabilities, and an easy ergonomics, this UBD-M9500 is worth considering in your home entertainment room.

The UBD-M9500 looks very similar to last year's UBD-K8500. The unit has that gorgeous black brushed finish and is made to look curved to give it a sleeker design. Its dimensions are 15.98" x 1.77" x 8.88", making it a rather thin device that will fit into any shelf or rack, but at just over 4 pounds, it feels more like an old, cheap DVD player than a high-end media player.

The disc tray is on the left side, with only two small silver hover-buttons on the top right, being the eject and power options. There is also an indicator light. In the middle of the front side is a camouflage OLED display screen that tells you Hello and Bye, along with the pause and play symbols when you press them on the remote. On the right side of the player, there is one USB input, which if you have a tight shelf space, you will have to pull out the unit to use the USB. I don't see why they couldn't have put this input on the front underneath the hover buttons. The back of the unit is very simple as well.

There are two HDMI inputs for splitting audio and video signals when you don't have a 4K-capable receiver. There is also an audio optical output and an Ethernet port. The system also has built-in WiFi and a ton of streaming options, such as Netflix, Hulu, and Amazon to name a couple. You'll notice a Home button on the remote control, which brings up a horizontal menu at the bottom of the screen while programming is playing. You can scroll to the left or right and choose your settings, screen sizes, picture quality, WiFi connection, apps to download or play, and even switch sources, all while watching your programming -- this marks a big improvement over the last gen model.

Also, the UBD-M9500 automatically kicks in the HDR when connected to an HDR ready TV and 4K Disc. You'll also be happy to hear that this player automatically picks the correct audio format on each Disc as well, including Dolby Atmos. The remote control itself is a delight, with a curved back and slim/short appearance that give this remote a very sleek and simple look. It also has a bit of heft to it, making it feel more like a top-of-the-line accessory. Chapter skips, fast-forward, rewind, pause, play, home, tools, menu pop up, eject, and a cursor with an Enter button all make this remote control very desirable and easy to use. There is no backlight to the remote, however. With all of these options, easy setup, and sleek design, the UBD-M9500 is eye-catching and powerful. 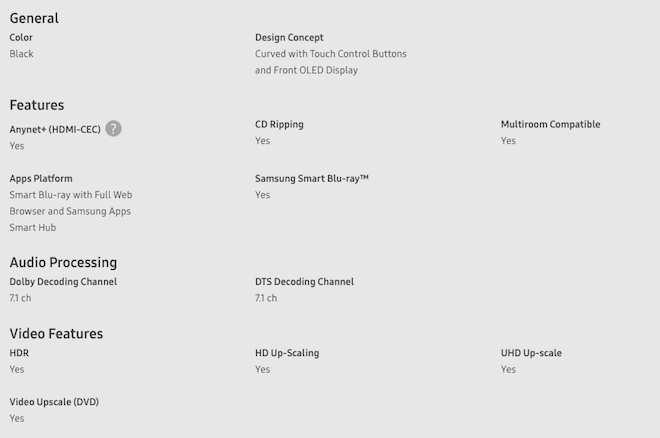 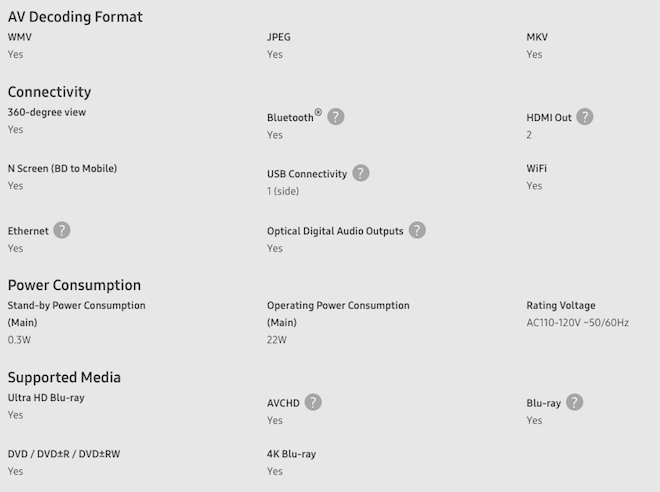 As I stated above, the M9500 is quite fast in loading 4K UHD Discs as well as Blu-ray Discs. When I popped in the recent Power Rangers films, the UHD Disc loaded and started playing in less than 15 seconds, which is lighting fast given the amount of information this player has to process. The HDR was impressive on this player and brought Power Rangers to life. Yes, it’s even demo worthy. The HDR handles every shade of color with stunning accuracy. The bright blue skies, the green blades of grass and the different shades of green on Rita Repulsa’s costumes are outstanding. When the Rangers finally become the Power Rangers in their unique colors, every primary and pastel color looks incredibly deep and rich. When their outfits and armor shine in natural and movie lighting, they have a great shine and glow to them. The darker scenes feature deep black levels that never show crush or murky shadows. There are a ton of scenes in an underground bunker where grays and blues are the only color, leaving a more muted palette, but even here it looks amazing.

The detail is ultra sharp and vivid as well. Every piece of debris, cracks in buildings, fire, and individual hairs and makeup on the actor’s face show up nicely. Every piece of thread can be seen easily on Repulsa’s costume and hair, which makes the film have a ton of depth. During the heavier action scenes with heavy CGI, detail is never softer or murky, but instead, every visual effect looks incredibly sharp.

I then put in the incredible Goodfellas UHD Disc and was not disappointed. What this 4K UHD does, that the other Blu-ray releases don’t, is stabilize grain throughout the movie. In previous releases, the grain levels would more or less fluctuate between the darker and lighter scenes. Colors are more saturated and realistic and pop more, specifically the browns and red lighting. Detail looks excellent as well and is even more nuanced in wellwell-litnes. Upon watching this 4K transfer, I instantly saw the improvements in the image. That first scene where Liotta, DeNiro, and Pesci are driving in the car and get out to kill Billy Batts in the trunk, is washed in red completely.

In previous releases, this scene tended to bleed a bit with red (no pun), as the older transfers were brightened up a bit. This particular scene just didn’t come across as natural and had an annoying shimmer to it. However, with this new look, there is none of that here. Everything is natural and well-balanced finally. This image has never looked so good. The colors simply pop off the screen and are well saturated to give the most realistic look. Nothing bleeds or shines too brightly. The detail looks amazing as well. The image is vivid and very sharp, especially in closeups, where you can see every imperfection in everyone’s skin and individual hairs on a certain person’s toupee. Wider shots also have a lot of detail, giving the image quite a bit of depth after these 27 years.

I also checked out The LEGO Batman Movie through the Vudu app to see how well the impressive Wifi handled the streaming signal. Needless to say, I wasn't disappointed. There was no pixelation or loss of detail or color here with every tiny detail and bright high-def color coming through nicely. The WiFi signal didn't cut out for me during the film either.

I also want to point out some of the cool features that come with this M9500 model. There is a new feature where you can watch movies from the M9500 player on your mobile device in 4K or regular 1080p. Meaning, if you are hogging the big screen playing Friday the 13th on your Xbox One, and your friend or loved one wants to watch Logan in 4K, they now can stream the disc to their phone while you keep watching the video game. It's a great new feature. In addition to that, you can mirror programming via Bluetooth from your mobile device straight to the 4K player and watch on your big television.

Also, if you have wireless headphones that connect via Bluetooth, you'll be able to send the audio signal to those headphones and watch a movie that way, so as not to wake up anyone else in the house. These features make the hefty price-tag worthwhile. Lastly, the M9500 model allows for the 360 content playback, which you can check out those fun YouTube 360 videos and control the 360 motion with your remote control. This feature will get bigger once 4K UHD Discs start to utilize different angles with their films.

The Samsung UBD-M9500 is a fantastic 4K player with a ton of bells and whistles and, while the $399.99 MSRP seems a tad hefty, the current Amazon price is $327.99, which is still high, but better. Luckily, Samsung gives a great HDR unit with fast WiFi, tons of 4K apps, mirroring capabilities, and streaming onto your mobile devices quite easily. Still, there is no support for Dolby Vision yet, which isn't a deal breaker yet, but in the near future, it might just be.

By then though, there might be a newer model or update here. Also, there is no 3D support either, which again is dying out fast, but those with extensive 3D libraries already, you'll be up a creek without a paddle here. With its sleek design, simple setup, wonderful remote, and glorious color range, this UBD-M9500 is Recommended if you don't mind spending the extra money and want to stick with the Samsung brand without the 3D support here.

Sale Price 449.99
Buy Now
3rd Party 449.99
In Stock.
See what people are saying about this story or others
See Comments in Forum
Previous Next