-Not limited in frequency

-No bundle discount for two, three, or four speakers 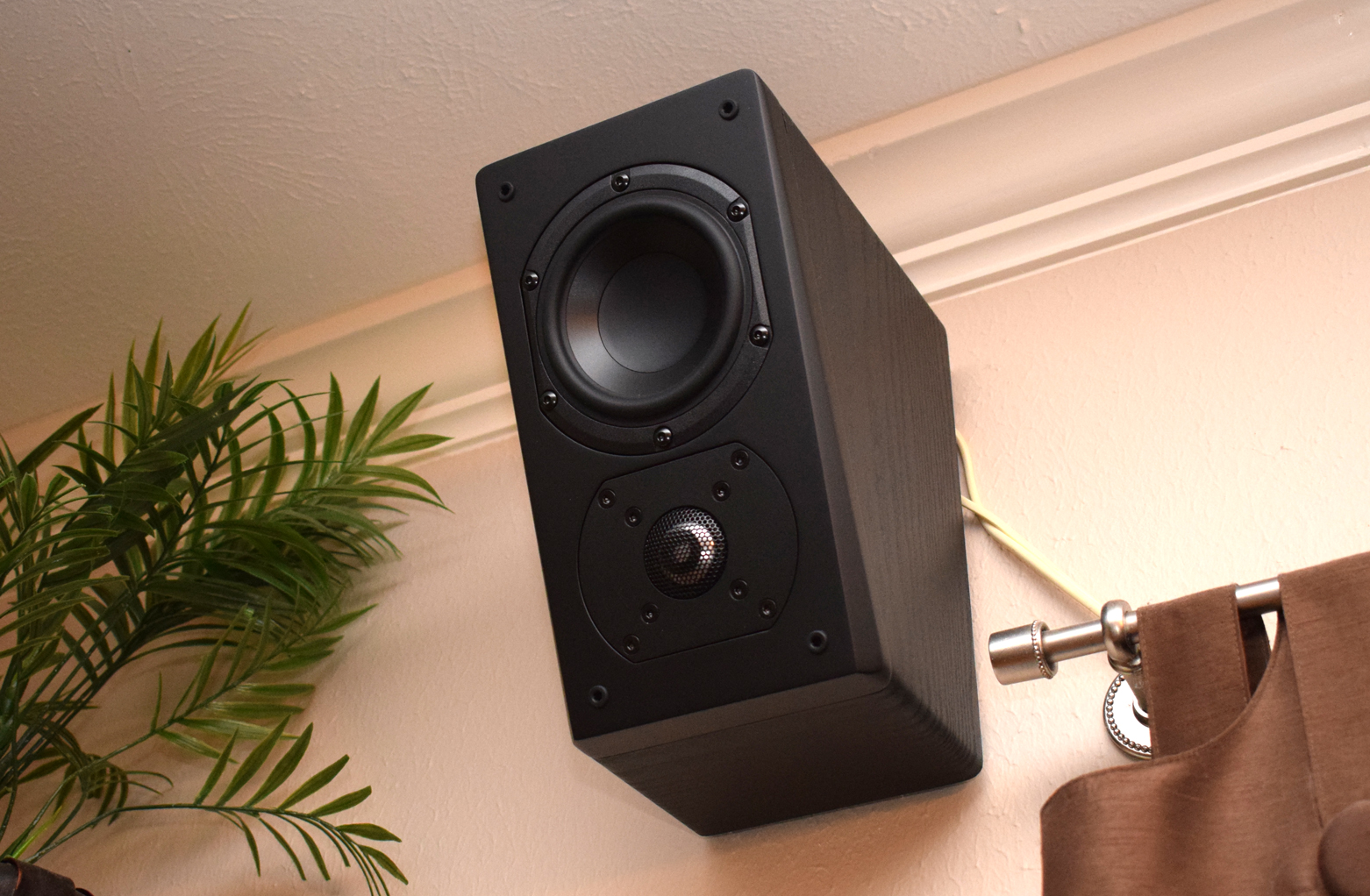 With both Dolby Atmos & DTS:X becoming a semi-regular feature for new Blu-rays and, even more common, Ultra HD Blu-rays, it makes sense that 2017 is the year many will want to add two or even four height channels to their home theater. Dolby Atmos, in particular, has been gaining steam for a few years, but the pitch has usually involved upward-firing bounce effect speakers in lieu of dedicated overhead ceiling speakers. For SVS, the popular subwoofer brand that has proven to also know something about satellite speakers (see here), there is another option, the SVS Prime Elevation Speaker. The Prime Elevation is designed to be mounted on the wall close to the ceiling and directed at the listener. This no-bounce-required method comes with an interesting bonus, the Prime Elevation is also suitable for use in a more traditional 5.1 configuration. 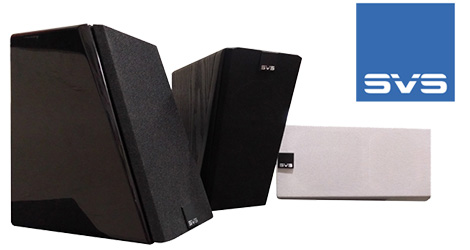 Finally, as a left, center, or right speaker, the Prime Elevation's angled face is meant to accommodate being either above or below the screen. To go with all the shifting possibilities, the Prime Elevation screen has a magnetic SVS logo, which can be popped off (this takes a bit of force and is unlikely to ever happen by accident) and popped back on to fit the application.

Unlike the SVS Prime Satellite, the rear of the Prime Elevation has a standard mounting post. One-half of the included two-piece multi-angle bracket attaches to that post while the other is mounted via wall mounts.

The cabinet itself maintains the styling of the Prime line, but with a few quirks. Without the screen, the speaker lacks for any logo and, as reviewed here in Premium Black Ash, is missing the flair of the Piano Gloss Black finish. I'm a big fan of that pricey color and finish upgrade, but at ceiling level and behind the screen, the Premium Black Ash is a fine option. Closer to ear level in either the front or back and without the screen, and the pricey Piano Black calls to me. (There is also a pricey Piano Gloss White option, which comes with a white screen, but keeps the black tweeter, woofer, baffle, etc. I consider this a good option for a specific room aesthetic.) Naturally, five-way binding posts are recessed and angled so elaborate speaker connectors, including the sometimes awkward Soundpath Ultra cables, can fit without issue.

With four of the Prime Elevation speakers on-hand ($199.99 each or $399.99 per pair), I continue to be impressed by the quality of the materials. There is nothing like loose adhesive or rough wood grain to bother me.

The quick specs for the Prime Elevation Speaker include: 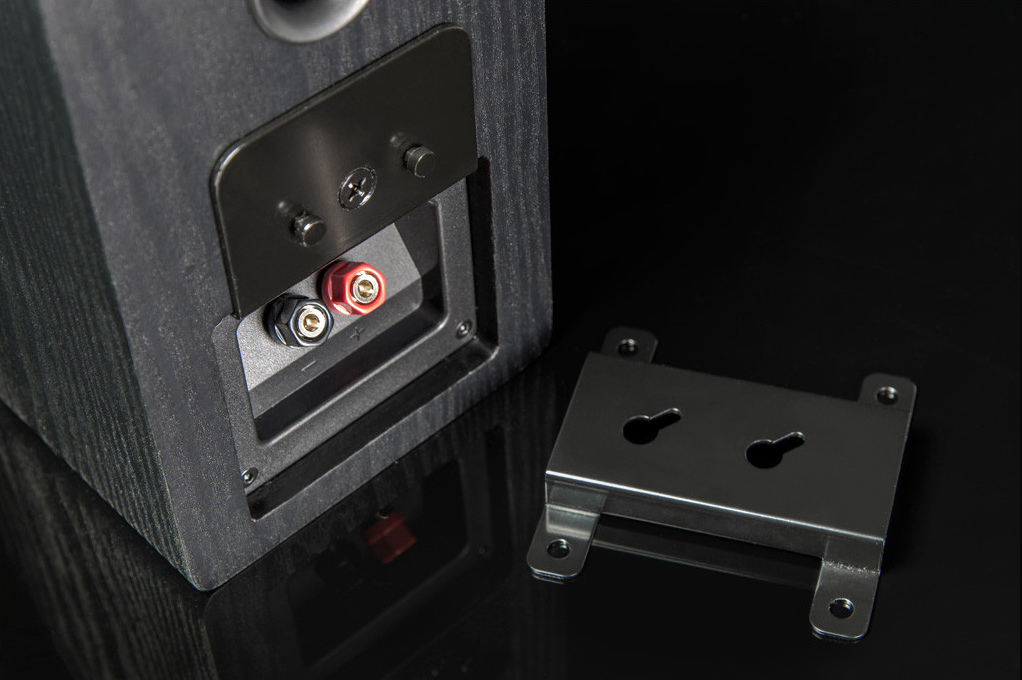 Of all the Prime Elevation's particular features, the mounting bracket seems to require some extra development time. That, along with the bracket's inclusion and perceived effect on the speaker price, seem like a nuisance to me. That is, until it was time to wall-mount the Prime Elevation.

Some background. I've enjoyed Atmos in my office for a few years, but when it came to adding Atmos and DTS:X to my living room, ceiling speakers just weren't in the cards. In 2016, I whipped my living room into my idea of home theater shape, with Ultra HD Blu-ray and 4K gaming making just as much impact as changing out all the seating and reconfiguring the entire room. In steps, my better half let me redesign our living room into a home theater our family could gather in without me thinking that my office would offer a better viewing experience. Unfortunately, at no point in this process did it make sense to add ceiling speakers, and that left me using Atmos bounce speakers, which, while effective, really didn't mesh with the living room the way I wanted.

So when it came time to mount the Prime Elevation speakers (as well as deploy the Marantz SR6011), I was thrilled to be putting in the last piece of the puzzle, but I was also very mindful not to cause any kind of wall wart. For Atmos and such, SVS recommends that Prime Elevation speakers be placed off to left and right, one for each side of the listener. That wouldn't work in my living room, so instead I went with two in the front, above the left and right main channels and two in the back. 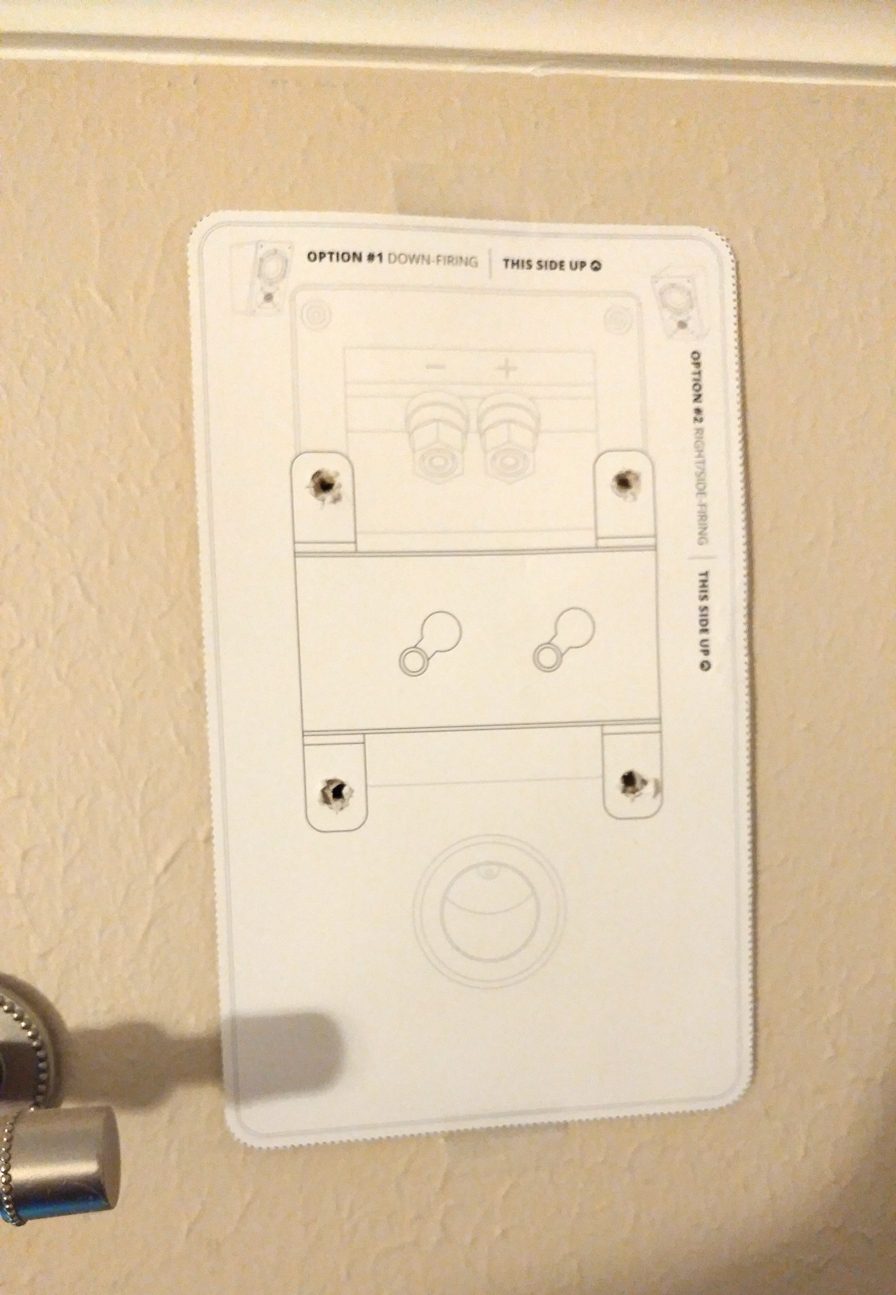 A paper mounting template is included with the speakers, and that, along with the two-piece design, made the install mercifully easy. Each speaker is nearly eight pounds, which is not nothing, but much easier to tackle than a TV or shelves. I opted to use my own wall anchors, but really, the hardware included with the Prime Elevation is a complete package. Because the bracket is two pieces, it's easy to take the speaker down to connect wire and room for said wire once the speaker is back up. Both bracket pieces are metal, but there is a thin black strip of foam on the wall piece to sure things up while isolating vibration. Once the bracket is attached to the wall and the speaker is connected, there is no real physical adjustment required or allowed. (There's no pivot.) That leaves further acoustic adjustment to the AVR, in this case, the Audyssey MultEQ XT32 of the Marantz SR6011. 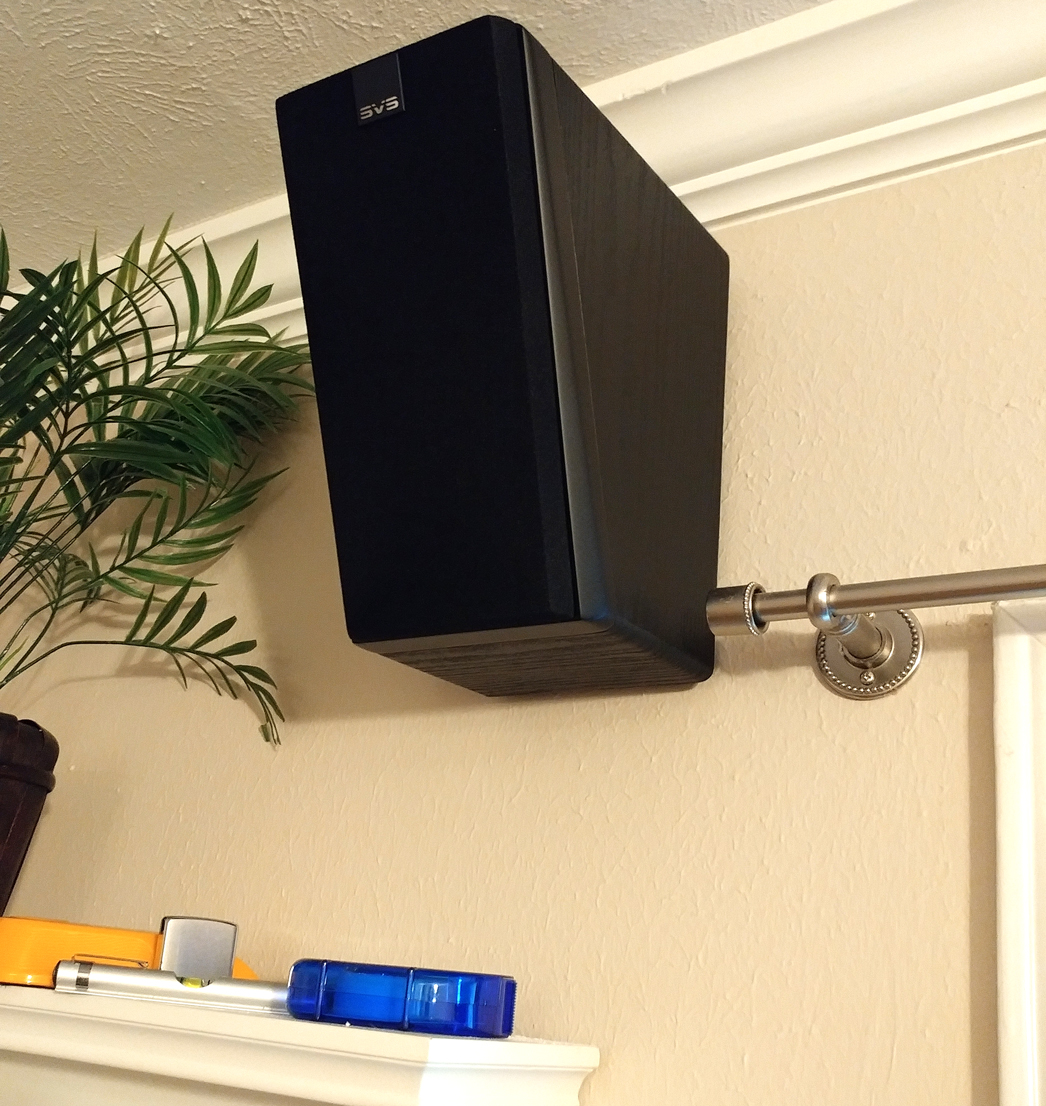 When using the Prime Elevation as a rear surround channel, the standard mounting post made using speaker stands very easy, and I was surprised to find that placing the speaker on its side somehow felt more balanced and less prone to tipping than the typical satellite speaker.

When dealing with Atmos and DTS:X, I always run to my demo discs, and that inevitably means trying out things like The Last Witch Hunter, but my first real moving-watching test for the Prime Elevation speaker was the Bourne Ultimate Collection Ultra HD Blu-ray set.

I played around with different configurations (two up front, two in back, all four), while I watched the Matt Damon saga go from its low-key beginnings to at least one superfluous but fun sequel. From bells in the Paris apartment in Identity to pounding music in Supremacy to radio chatter in Ultimatum to the drone attack in 'Legacy' and finally the Vegas strip in JB, the Prime Elevation was able to deliver an extra layer of audio effects. To be fair, the extra audio objects and score blending could have been delivered with a bounce solution, but I prefer the direct output. 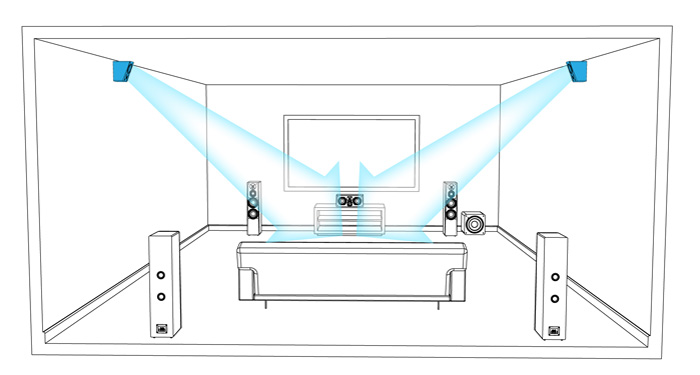 Moving on to Atmos favorites like the storm in the beginning of The Martian: Extended Edition or the border crossing in Sicario Ultra HD Blu-rays, and the Prime Elevation felt fully integrated and never shrill.

Since Dolby Atmos arrived on the home theater scene, I've sought ought good examples. Whenever I've taken an Atmos track that I like and compared it to the up-mixed version, the Atmos encode seems to be a clear winner. And yet not all Atmos movies make it home (still waiting on Elysium, not to mention everything Disney). With the Prime Elevation speakers installed, however, I have grown to appreciate Dolby Surround and DTS:Neural:X up-mixing. 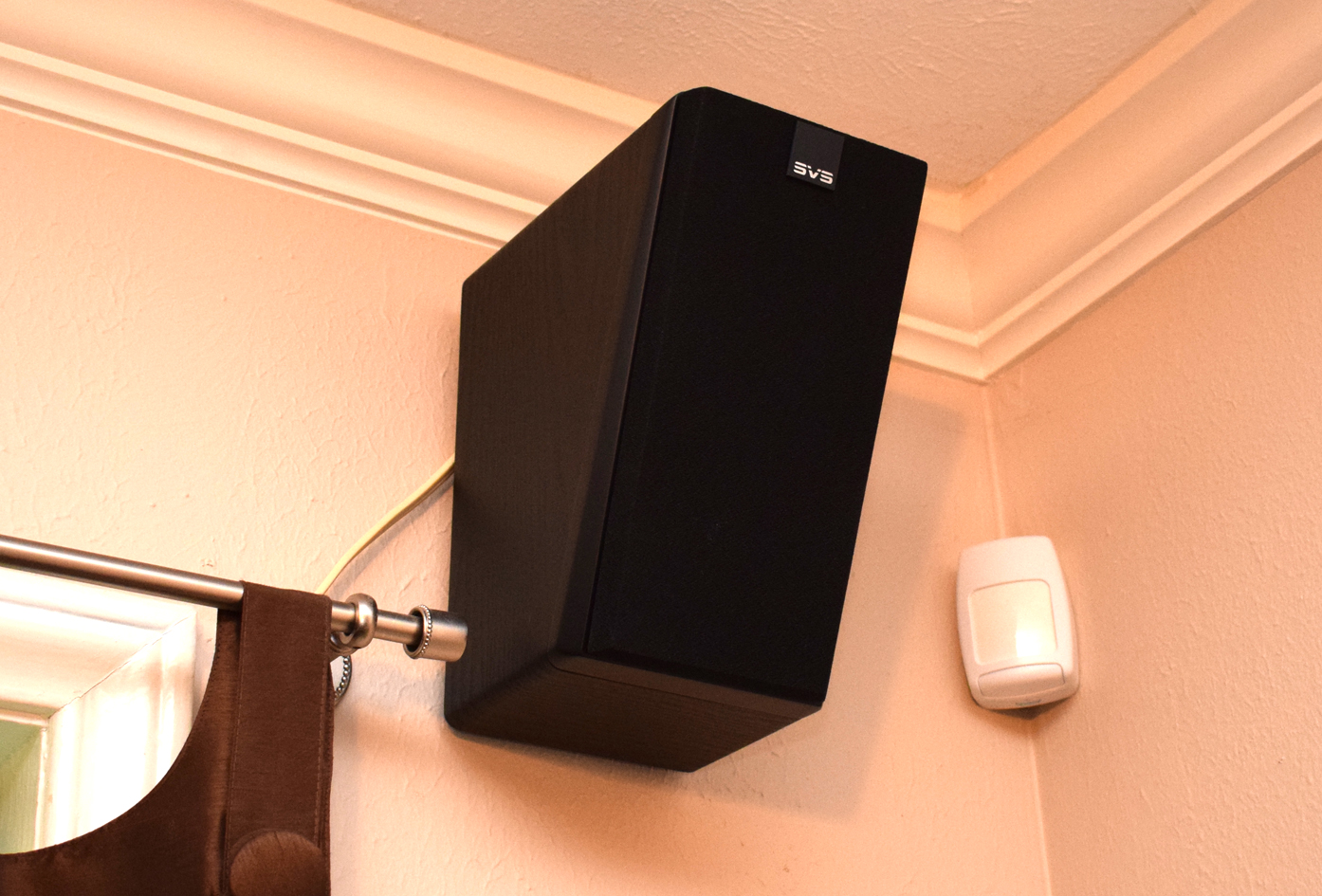 When watching The Accountant with its DTS-HD MA soundtrack up-mixed, I quickly got over the lack of DTS:X/Atmos. (In fact, I thought it was better than the 'American Sniper' Atmos mix.) Meanwhile, watching the first episode of 'Daredevil' in Netflix Dolby Vision with the Dolby Surround upmixing, and the rain outside Murdock's apartment is absolutely chilling.

Playing The Last Guardian on the PS4 Pro, one of my favorite moments (of many stunners) is the second time exterior environment. With the wind ruffling through Trico's fur, it's the audio that helps distinguish the quiet outside from the even quieter inside. Along those same lines, in The Legend of Zelda: Breath of the Wild on the Nintendo Switch, the Ocotoroks, with their tendency to pop up and spit rocks at Link with uncanny accuracy, can make for subtle but wonderful audio cues across the living room.

But here again, it's the design and shape of the Prime Elevation that helps the home theater as a whole to operate as it should without a lot of fussing. The pros of up-mixing remind me of my first 7.1 setup a decade ago, but with a more vertical element that is good in rooms of all sizes.

I said the Prime Elevation never felt shrill, but there might be a purposeful exception or two to be found. Take for example the Tie fighters in Star Wars: The Force Awakens. 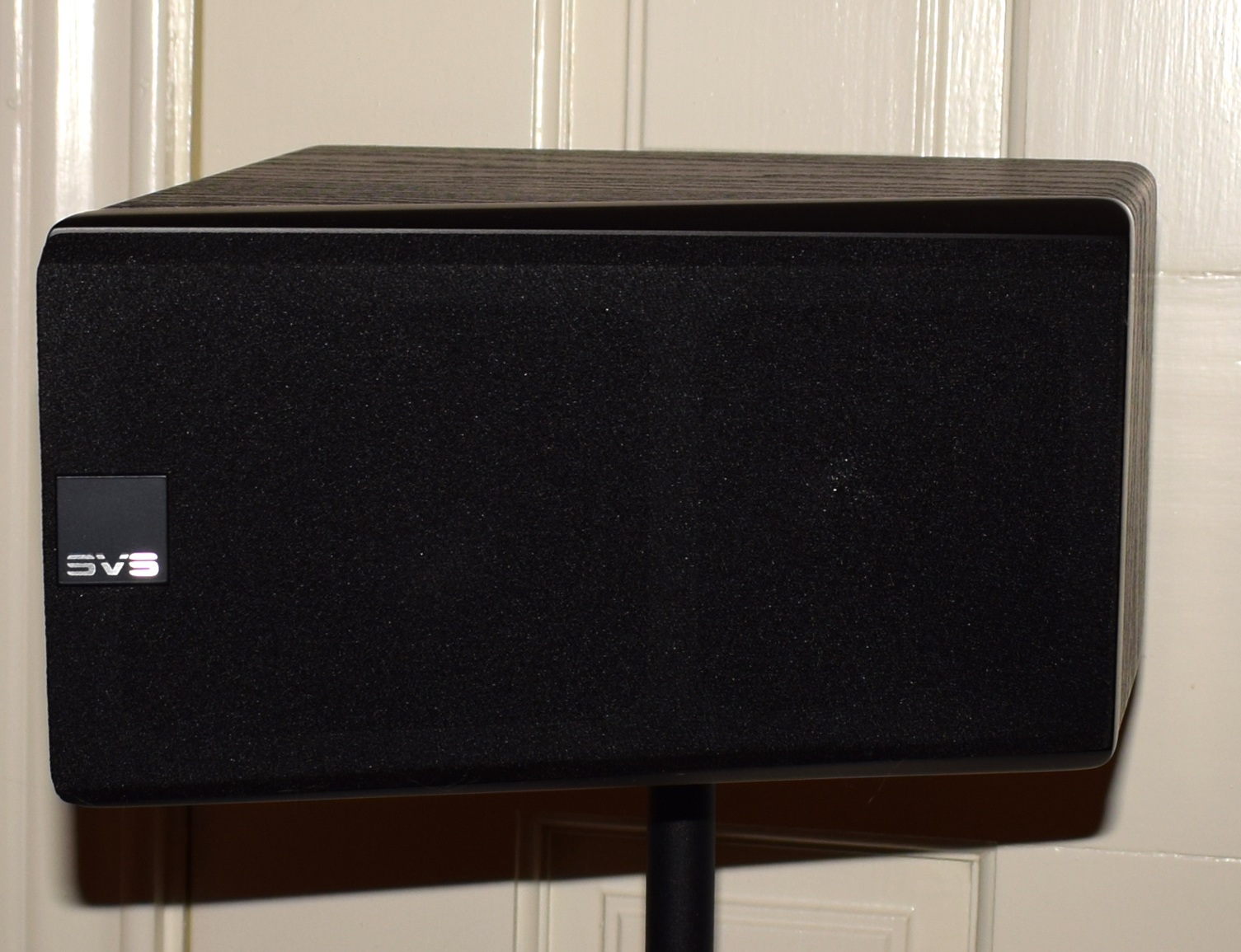 SVS has done an interesting thing in offering a specific Dolby Atmos / DTS:X solution that is also just as capable for surround sound. In a 5.1.4 configuration, I could easily see the Prime Elevation Speaker serving as the .4 as well as the two back channels. That would make for six of the ten channels. These are basically big satellites, and their frequency response proves out during use. As ever, it's an interesting equation balancing out the capabilities of the speakers with the sub and the AVR. A good sub is a must.

As a front channel, the Prime Elevation can get the job done in a 5.1 configuration, but I would only go that way if say, I had no place to put the front channels but mounted above the screen. When it comes to a 2.0 application in a living room sized area, I'll want bigger mains. 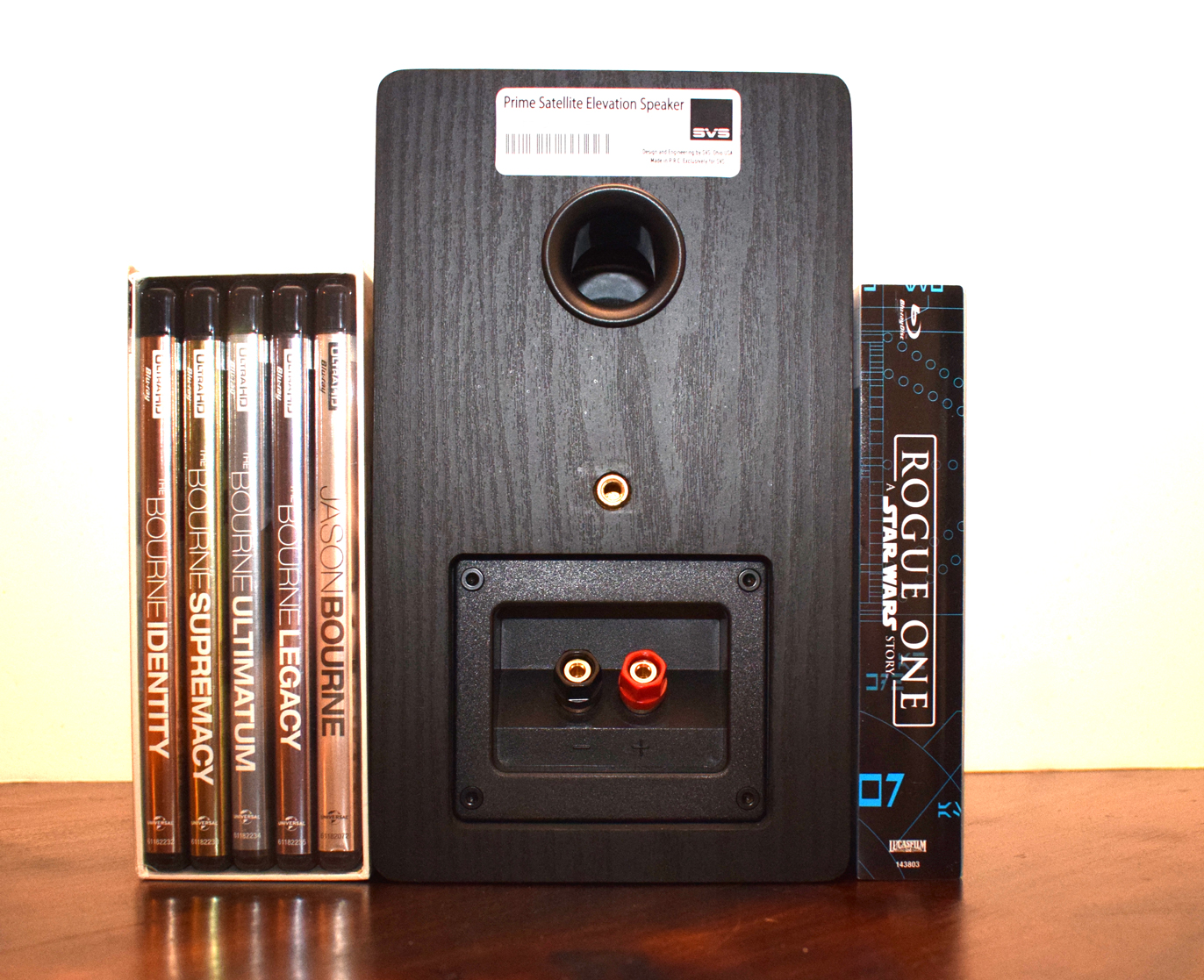 Sale Price 499
Buy Now
3rd Party 394.92
In Stock.
See what people are saying about this story or others
See Comments in Forum
Previous Next