-Runs quiet & cool with clean sounds at all volumes

It's easy to see why Yamaha sells more AV Receivers worldwide than many other brands. They offer an incredible combination of quality, power, and up-to-date technologies that produce rich, enveloping sound across a broad range of movie, music, and television content.

Yamaha's top-tier receivers are members of the exclusive AVENTAGE series, which includes six AVRs as well as one pre-amp/processor and one power amplifier. The RX-A660, RX-A760, RX-A860, and RX-A1060 all feature 7-channel amplification with the ability to either watch 7.1 content natively or Dolby Atmos and DTS:X in 5.1.2 configurations. The RX-A2060 adds processing and amplification for up to 9.1, 7.1.2, and 5.1.4 configurations. The RX-A3060 retains 9-channels of amplification, but adds processing for up to 7.1.4 configurations (this requires an external 2-channel amp). The CX-A5100 AV Preamplifier & MX-A5000 AV Amplifier combo are also capable of up to 7.1.4 Dolby Atmos and DTS:X configurations.

For our review today, Yamaha kindly loaned us their flagship AVR, the RX-A3060.

Let's be blunt. All AVRs look pretty much the same. This, by the way, is totally fine. I want to set up an AVR and forget it. I want to to be an amazing audio-video hub that never breaks and requires as little tweaking as possible. Yamaha's AVENTAGE lineup takes the standard black box elements and gives them a little polish. Literally. The finish is a bit more glossy and metallic than some other brands with a combination of aluminum and glass. This fit-and-finish looks terrific and stands out against the competition.

At nearly 40lbs, the RX-A3060 is also heavier and deeper than many 9-channel flagship models, I think partially due to its H-shaped frame structure with the symmetrical Class D amplifier layout (right and left channels are isolated from one another). For me, this means Yamaha AVRs end up on the top of my home entertainment center rather than hidden in-shelf. Either way, definitely measure your space before purchasing a new AVR, taking into account proper ventilation.

Overall, the A3060 is a classy machine with a strong sense of craftsmanship and durability. In terms of features, there are almost too many to list, but here are a few specifications courtesy of Yamaha.com...

I've yet to come across a flagship-caliber AV Receiver that fails to produce excellent surround sound. And, in 2016 at least, most AVRs share similar feature sets (2014 was the dividing line between Atmos and non-Atmos AVRs, while 2015 saw many AVRs endlessly waiting for a DTS:X firmware update). The main distinguishers, then, are all about setup day-to-day ergonomics. Basically, how intuitive is the graphic user interface, how much time does one spend waiting for the calibration software to run, and how much fiddling and tweaking is required during ownership?

Yamaha offers an extremely easy setup process across the entire AVENTAGE series, with a few extra tools set aside for the A3060. 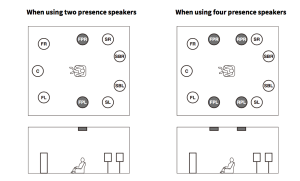 With speakers, four HDMI sources, and a Klipsch turntable connected, I powered on the RX-A3060 and followed the instructions. Language selection and speaker layout are first; select whether or not you have in-ceiling, height, or Dolby Atmos-enabled speakers. You can also identify subwoofer location (I have one Klipsch R-12SWi 12" wireless sub up front and one Klipsch R-10SWi 10" wireless sub behind my listening position).

Next, run YPAO calibration. The A3060 and A2060 offer an upgraded version of YPAO that includes Reflect Sound Control, YPAO 3D, and angle measurement, while the A3060 exclusively adds 64-bit EQ calculations. Yamaha includes a microphone as well as a microphone base stand which takes three ear level positions as well as one height position. After a series of test tones, the AVR calibrates speaker delays, crossovers, distances and relative levels. No calibration software is perfect -- I had to tweak one speaker and subwoofer distance, and I wish Yamaha included a subwoofer equalization tool --  but YPAO is generally accurate and fuss-free. The the best AVR calibration makes it hard to tell exactly where your speakers are located, making it sound like you have entire walls or hemisphere of speakers. YPAO delivers.

After speaker calibration, the A3060 guides users through wireless network connection, necessary for music streaming services as well as firmware upgrades. Since the A3060 is an AirPlay device, save time by piggy-backing on any iOS device's WiFi settings, which speeds up the login process considerably. Once online, feel free to add the A3060 to your MusicCast network (or start one) using Yamaha's MusicCast app for iOS or Android devices (more on this below).

Overall, the setup process takes about 20 minutes, which is on the quicker side of things. 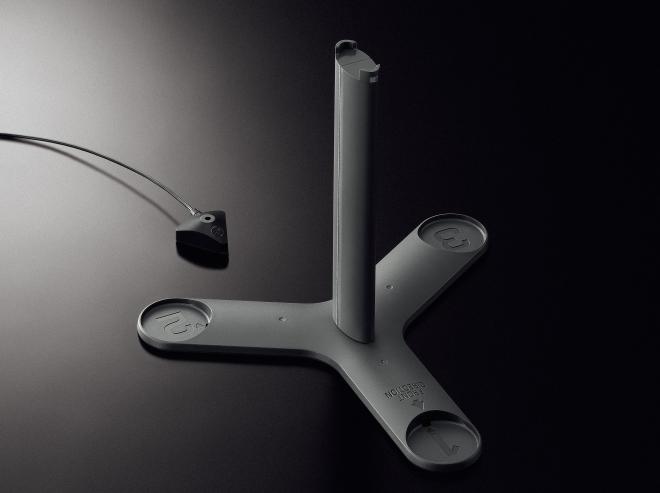 Day-to-day A3060 ergonomics are equally pleasant. The supplied remote fits in the hand nicely (though I wish it was backlit) with a nice array of buttons. Yamaha elects to leave their AV inputs as numbers rather than specific names (#s 1-7 rather than Blu-ray, Media Streamer, Cable, etc), which I don't love. And, while Yamaha's GUI is cleanly designed and easy to navigate, the layout isn't the best.

More important, however, the A3060 needs little tweaks and adjustments, save for one minor inconvenience: selecting a post-processor for up-mixing content. The A3060 can directly decode any content (tap the "Straight" button), which leaves 5.1, 7.1, Dolby Atmos or DTS:X mixes AS-IS regardless of speaker layout. Tapping the "Surround" button add Yamaha's Cinema DSP, Dolby Surround, or DTS:Neural:X post-processing. This works well most of the time -- and you can even add Neural:X up-mixing to Dolby codecs, or Dolby Surround to DTS codecs -- but interferes with native Atmos and X mixes when you've selected the other company's post-processor. In other words, if you enjoy implementing Neural:X, turn it off to play Dolby Atmos. OR, if you enjoy Dolby Surround, turn it off to play DTS:X. It's a small bug shared by most other AVRs, but needs improvement.

Modern AVRs are media hubs for video and audio content alike. With the advent of HDMI, it's far easier to route multiple video and audio sources through an AV Reciever rather than having to connect each to a display separately. This evolution simplifies things like swapping gear in and out or having to run a half dozen different HDMI cables to a TV, but there is one tradeoff. Make sure your AVR is up-to-date with current generation HDMI and copy protection standards.

However, while HDMI 2.1 is still a little ways off, Dolby Vision will be making its debut on Ultra HD Blu-ray in the spring or summer of 2017. From a specifications standpoint, the A3060 **should** be able to handle Dolby Vision, but there's a chance you may have to circumvent the A3060 (video only) if you purchase a Dolby Vision enabled UHD Blu-ray Player. Otherwise, this AVR is about as "future-proof" as gear gets these days.

On the audio side of the equation, the A3060 delivers blistering and accurate multi-channel performance for Dolby Atmos and DTS:X sound mixes. Dolby recently sent me the Ultra HD Blu-ray version of 'Deepwater Horizon' which was not only extremely well executed, but boasts an ultra aggressive Dolby Atmos mix that hauls viewers into the middle of an exploding oil rig. 'Hacksaw Ridge' too turns full agro during the movie's hyper-violent battle sequences, managing to be both bombastic and symphonic in the way it layers and orchestrates chaos. On the DTS:X side of things, the new 'Bourne' UHDs offer a nice upgrade over their 5.1-limited Blu-rays. Also, if you get a chance to pick up the outstanding sci-fi film, 'Arrival', it boasts an incredibly nuanced and LFE-friendly DTS-HD MA 7.1 mix that up-mixes perfectly to 7.2.4 using DTS:Neural:X or Dolby Surround.

And while it no surprise that $2,000+ AV Receivers produce accurate sound, it's vital for AVRs to deliver distortion-free sound without excessive heat and fan noise. The A3060 is far more capable that most entry and mid-level speakers, cranking the volumes up to and past reference levels without breaking a sweat. Never dangerously warm, and no sounds of fans whirring away (unlike my two-year-old MacBook Pro, Tim Cook!).

Regardless of movie or TV content, the A3060 does it all. 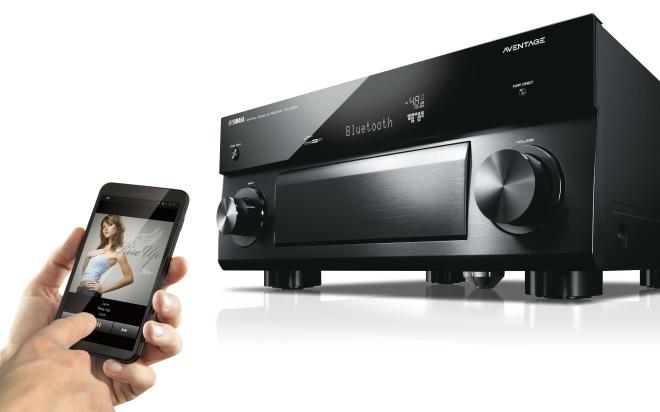 With multiple analog and digital inputs -- plus built-in Wi-Fi, AirPlay, Internet Radio, and Bluetooth -- the Yamaha RX-A3060 is a very capable audio hub. Especially when you add in Yamaha's MusicCast system where, if you own multiple Yamaha speakers or devices, you can playback one song from any source across your whole house, OR a song for every separate MusicCast location. Apple's AirPlay always works great for anyone with iTunes on a PC or Mac, or an iOS device. Or simply hook up your smartphone, tablet, or computer using Bluetooth -- that's easy too, but I did experience signal dropouts on the A3060, which doesn't happen with my Denon gear.

I spent hours listening to records and MP3s, and streaming music from a variety of sources across genres that include movie scores, rock and heavy metal, oldies, alternative, rap and hip-hop, and Broadway tunes (and Peggy!). Whether I elected to use two towers and subs, or multi-channel up-mixing, the A3060 played back everything I owned with ease. Your own true weakness will be your speakers and source quality.

The Yamaha RX-A3060 delivers dynamic sound at ear-bleeding volumes with excellent calibration and processing. My only nitpicks are about the number of amplified channels (I wish it went up to 11), a minor limitation in they way Dolby and DTS post-processing is applied to each other's codecs, and the slight caution that this AVR *might* not passthrough Dolby Vision on Ultra HD Blu-rays (we'll find out later this year). But that's me stretching to nitpick. It's an awesome machine.

If you're looking for a powerful, quiet AV Receiver and whole-home media hub, with the ability to decode and passthrough all current forms of UHD and HD content, the Yamaha AVENTAGE RX-A3060 comes highly, highly recommended.