While some enjoy the big bad A/V Receivers equipped with every function possible, others opt for a more simplistic approach when listening to their favorite music. Luckily, Yamaha has delivered the goods on their Hi-Fi network audio receiver - the R-N402. This is a product that should satisfy past and present audiophiles by combining old-world charm with the new age of wireless streaming music. Not only will you get crisp, clear Hi-Fi audio here, but you will also get the amazing Yamaha MusicCast multi-room streaming capabilities. For those of you looking for a simple, yet heavily-optioned audio receiver, the R-N402 is an excellent option. 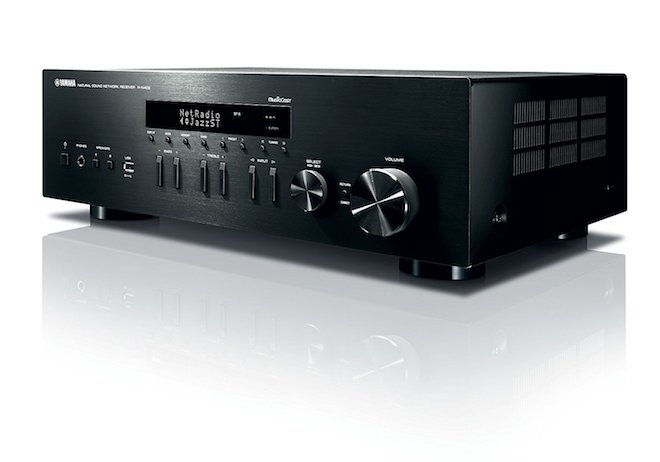 Much like other Yamaha A/V products, the R-N402's simple design is not as sleek as some of the other companies. This unit won't take up as much space as some of the other bigger A/V receivers, but it's still a bulky piece. In this corner, weighing in at 16 pounds and measuring 17-1/8” x 5-1/2” x 13-3/8”, you can tell this is a decently sized unit for being a simple audio receiver. It features a textured, brushed-aluminum black finish that is not glossy or sleek. The front display window is simple and brightly illuminated. Front panel buttons are simple and easy read as well. The bigger buttons consist of power on/off, treble and bass volumes, two input selectors, a knob for selecting different options, and a main volume knob. Smaller buttons consist of your A/B Speakers, Display, Mode, Memory, Band, Presets, Tuning, and a Return/Connect button. They are all evenly spaced and easy to find. In addition to that, there is a headphones input and a USB input on the front of the unit, just in case you would like plug in your USB Drive and listen to music that way.

Around back, there are digital optical and digital coaxial inputs as well as 4 different RCA inputs (Red and White) for you to hook up CD Players, iPods, or Turntables. There is also a Line Out, AM/FM antenna hookups, and an ethernet network port. What's also cool about this R-N402 system is that it has the A/B speaker option in that you can hook up a total of four speakers to this unit and choose if you want to listen to one set or both sets at the same time.

The long, skinny, silver-ish remote feels a bit on the inexpensive side of things -- it's not very heavy and feels like it could break easily (though it doesn't). The buttons have enough space for your fingers to tap them without pressing two at a time, while all text is easy to read. Every input and feature option has its own button too, which is nice. 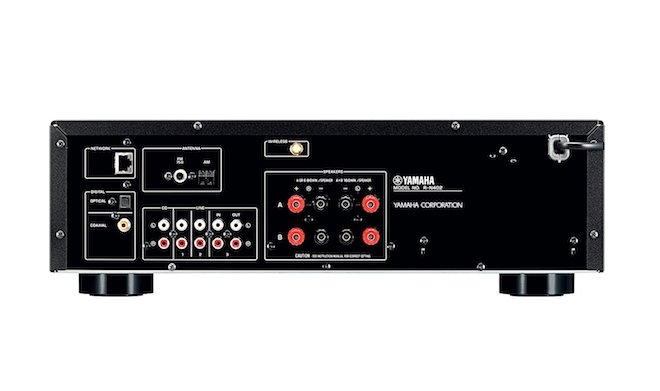 SET UP AND NAVIGATION

The Yamaha R-N402 is very easy to set up, as you only need one or two different types of hookups plus your speaker wire to start listening to your favorite tunes. In my case, I don't really use a big CD player anymore, but I did hook up my Technics SL-1200MK2 Turntable and my 160GB Classic iPod via my audio dock. I also used my two Bose Wall shelf speakers to provide sound. After plugging the R-N402 into the wall, you're basically ready to start listening.

From here, you can set up your sound experience and Wireless information by using the easy-to-use MusicCast App or the unit itself. If you use the unit itself, it will take longer to enter in passwords for your wireless router. You'll also be able to set up the A/B speaker units as well as adjust the speaker balances on each speaker, as well as the Treble and Bass volumes. In addition to that, you can configure all of your favorite wireless streaming Music Apps, including Pandora, SiriusXM, Spotify, Napster, Apple AirPlay, and Bluetooth, amongst many others.

This R-N402 delivers 100 watts per channel, which means that if you have big speakers hooked up to this unit, you're going to get a powerful and robust sound. I put on Frank Zappa's 'Strictly Commercial' album on vinyl and it sounded excellent. With the 'I am the Slime' track, the horns sound crisp and clear and have some great depth to them. The bass kicks in, of course, with the bass riff and sounds excellent, with the higher octave vocals from the female singers never reaching a high shrill or tin can sound. Needless to say, there is more heft and weight to this album with this R-N402 receiver in the mix. I then switched it to the iPod and played 'Hello, goodbye' from a little-known band called 'The Beatles', and even though this is an MP3 that is condensed down to a digital format, this R-N402 brought out the highs and the lows very well, with every instrument shining on the two Bose speakers perfectly.

Of course, it doesn't have the analog vinyl feel, but it's very close here, and I was able to switch inputs by pressing just one button. I then used Apple AirPlay to stream Curtis Mayfield's 'Pusherman' off my iPhone, which sounded just as good as the iPod. It had a full nuanced sound from start to finish. And again, I switched inputs with just a push of one button. It's that simple. Another cool feature this unit has is the ability to switch between Gapless Playback and a Gap Playback, which means if you want to hear an album without any silence between songs, you don't have to. On the contrary, if you are listening to a live album that has zero silence in between songs, you can choose to play each track with a gap as to separate each track. It's a simple, yet nice feature.

In addition to digital and analog source options, the R-N402 boasts a whopping 40 AM/FM presets and 40 Network presets, making it easier to pre-choose your favorite stations and streaming networks. Not to mention that, if a friend comes over with a new album you don't have yet on their flash drive, they can simply plug it into the front port of the unit, and you'll be able to listen to the album. Needless to say, this R-N402 has a ton of options for audiophiles. 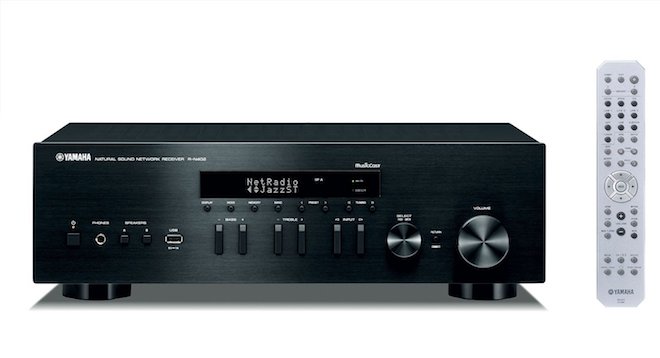 The Yamaha R-N402 is a fantastic unit for those of you who want a simple Hi-Fi audio receiver to play their favorite music on a multitude of speakers. The unit is easy-to-use and set up as well. While it might not look very sleek or curvy, it makes up for this in features, including wireless streaming, Apple Airplay, Bluetooth, and even a USB port on the front of the unit. The gapless playback is fantastic as well, in addition to the A/B speaker options. If you are looking for an audio receiver with a ton of fun features that combines both the new age of streaming music and the classic way of listening to your favorite albums, the R-N402 is an excellent choice. Plus, it is very budget-worthy for all you get with it.