- Tons of wireless and streaming features

- Easy to use mobile app

In a perfect world, we would all have Dolby Atmos systems hooked up in every room of the house, but we know that is neither monetarily feasible or practical. Sure it would be amazing to have 7.1.2 in the master bedroom or even in the dining room, but that's just not going to happen. For those of us who love to have a great sound with our music, TV programs, and movies, and don't want to suffer the soft mush of TV speakers, the popular sound bar has made its way into the hearts and homes of many people.

Sound bars provide a crisper, clearer, and bigger sound, but are sometimes limited to 2.0 stereo mixes, without a subwoofer or rear channels. It's still a step up from the normal TV speakers, but for those of us that want the full surround sound experience, we are still left twirling our fingers. Luckily for us, the Yamaha YSP-1600 MusicCast Sound Bar brings legitimate 5.1 sound into any room you have.

This YSP-1600 comes with many drivers built into the unit, along with dual subwoofers that project the sound waves off the walls to deliver surround sound from behind you alongside good bass. Not only that, this unit has a treasure trove of wireless streaming features, and well as a multi-room setup, which transform this simple sound bar into superhero multi-channel Digital Sound Projector, so to speak.

When Roy Scheider said, "We're gonna need a bigger boat", I think the engineers at Yamaha took that famous phrase to heart when they built this YSP-1600 Sound Bar, because it is very big. The unit stretches almost 40 inches in width, 2.5 inches in height, and a little over 5 inches deep. That's a big boy, which if you have your television on its stand and not mounted to the wall, it will come right up to the bottom of the screen.

If you have a TV that is under 50 inches, this sound bar might block the remote sensor, however there is a remote repeater function on the unit. Wall mount brackets, screws, and a very useful cardboard template are included here if you choose to install the 10.4-pound device to your wall. This is not a sleek looking unit either. It has a black finish without curved angles really anywhere with brushed matte surfaces and metal grilles in front of the speakers. The front of this unit has eight 2.8" speakers pointed at you behind the metal grille and two ceiling facing subwoofers on either side of the unit, which is odd. To the right of the eight small speakers are five buttons that you can press, including volume, input, power, and connect (as in, connect to a wireless network).

To the left of the speakers, LED lights illuminate or blink when you change inputs, lower or raise the volume, or connect to any other wireless device. The buttons and lights are labeled, but the font is so small, you'll have to get up close and personal to read them. It would have been nice to have a text display on the TV screen for this, but however, there is not. Inputs and outputs are around back, featuring a bittersweet variety of hookups. Like 'The Kurgan', there can be ONLY ONE HDMI input on this Yamaha unit, which is unfortunate if you want to hookup a ton of devices to it. The sweet side of this is that it's a HDMI 2.0 with 4K/60p passthrough and HDCP 2.2 support along with an HDMI ARC output. I guess technically you can purchase a multi-HDMI input adapter if you need to. There is also an optical input, and analog input, Ethernet port, and a subwoofer output incase you want extra oomph.

The Wi-Fi antenna sticks up a couple of inches from the center-back, which if your television is on its stand, the antenna will stick up in front of the screen. As Foreigner once said, "There will be heartache and pain" with that antenna. The wireless or wired connections to the internet will allow the unit to connect to a giant sky of wireless speakers, headphones, and streaming apps, along with wireless Blu-ray players, TVs, and even Bluetooth and Apple AirPlay. Your Spotify, Pandora, and other streaming apps will be able to connect to this device, using the amazing, free MusicCast app on your mobile device. 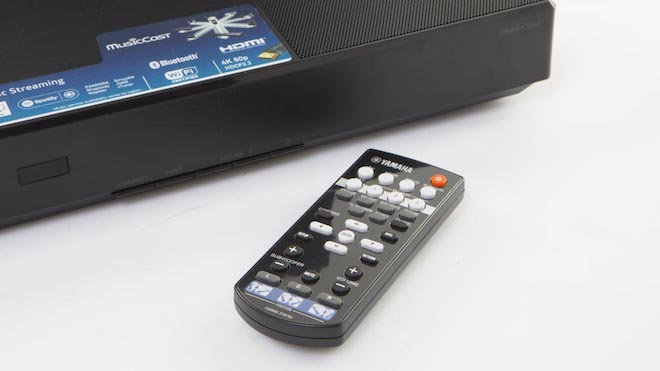 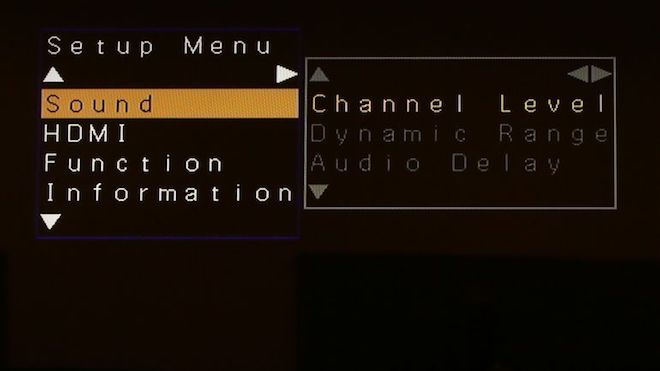 Being a single-unit sound bar, this YSP-1600 is super simple to set up. Basically, plug the unit into a wall along with your one HDMI input and one HDMI output going to your TV, and you're ready to go. A very simple front display pops up on your television screen to allow you to adjust each of the speaker's volume set, network connectivity, and lip sync problems all from the handy, small remote. There are even test tones to help you settle on the volume you like for each speaker.

To help customize your listening environment, you can adjust the direction of the sound beams -- they bounce off the walls to give you that perfect 5.1 surround sound -- by pressing one of three buttons on the remote that. There is also a subwoofer control to raise or lower the bass. The remote itself is small, but laid out well, with great labels on what each button does. While it feels a bit cheap, it fits easily into any hand for use.

The MusicCast app is very easy to use as well, and not overcrowded by tons of options. It's straight and to the point, which allows you to uses different speakers, playback controls, and use all of the Cinema DSP controls, including Movie, Music, Game, TV, and Sports, along with a Clear Voice option. 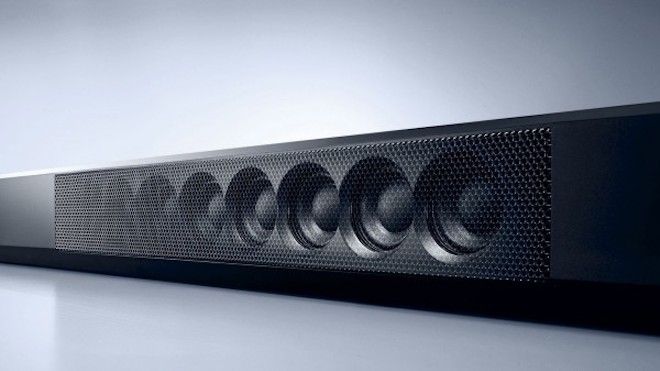 This YSP-1600 is an excellent unit that delivers 5.1 surround with deep bass and crisp tones from the entire soundscape. Everything flows evenly through the speakers and with the sound beams bouncing off the walls, to create a 5.1 sound stage, you can't help but fully immerse yourself into whatever you are watching or listening to.

The final gun battle in the recent 'The Magnificent Seven' remake is insanely good and, when it comes to a fully immersive surround sound, this YSP-1600 delivers. Thousands of gunshots ping-pong from all locations, some of which are closeup, and some are from many years away. This unit perfectly layers and balances each sound to project a good amount of depth from each gunshot. And, with relaying the sound beams off the walls, it feels like a lot of the gunshots are coming from behind you and on all sides. The gun blasts pack a powerful punch each time with the right amount of that deep bass with each blast.

When the minigun unleashes the thousands of rounds on the western village, I could hear the bullet casings and debris falling from overhead with this unit. That's how good this 5.1 simulation is. The dialogue was always crisp and clear with some solid directionality. The score was always sweeping and never drowned out any other sound element. The high ends and treble at times were stretched thin, but it was barely noticeable with the amazing low end and mid range of noises that catapults this YSP-1600 unit into a new level.

The dual built-in subwoofers are quite powerful. When Chris Pratt blows up one of the sheds with a big explosion, the subwoofers let out a well balanced and large bass growl that sounded like a high-end 10-inch subwoofer. It was impressive and surprising. I messed with the Cinema DSP modes, and found that some of the different modes added an echo or concert hall venue type of aspect to the sound. Needless to say, I kept my loaner unit on the "Movie" mode.

Currently, the YSP-1600 retails for around $500, which is certainly cheaper than most big surround sound units and receivers. $500 might seem a bit expensive to some, but for what you get here (it's a lot), this is a very reasonably priced sound machine... sound bar... Digital Sound Projector. Two subwoofers and eight speakers in one unit that not only put out a robust and full sound with great low ends of powerful bass, but delivering an actual 5.1 surround sound experience without having to hook up tons speakers or even a receiver.

In addition to that, the plentiful feature set is key to anyone who loves to stream music or movies wirelessly, since this comes packed with multi-room music streaming, Bluetooth, Apple AirPlay, and a 4K HDMI input. Sure, the design itself is big and clunky and doesn't have sleek curves or a shiny polish to it, but it's the insides that count. The sound bar is very easy to setup and use with a great remote and fast MusicCast App that allows you to connect any streaming devices.

If you're looking for a 5.1 surround sound system with excellent bass, but don't want to run wire to speakers all over the room, and don't mind some minor hiccups such as the tall Wi-Fi antenna that sticks up or hard-to-read buttons, this YSP-1600 is a magnificent deal from Yamaha.