In a world where the removal of a headphone jack makes for industry waves, there can be little doubt that we all could use a good set of cans. When it comes to headsets, Logitech clearly has a PC audience in mind. Recent Logitech headsets have been very feature-laden and, well, colorful to say the least, but with the new for 2017 G533, Logitech has one of the more purpose-focused headsets in recent memory. 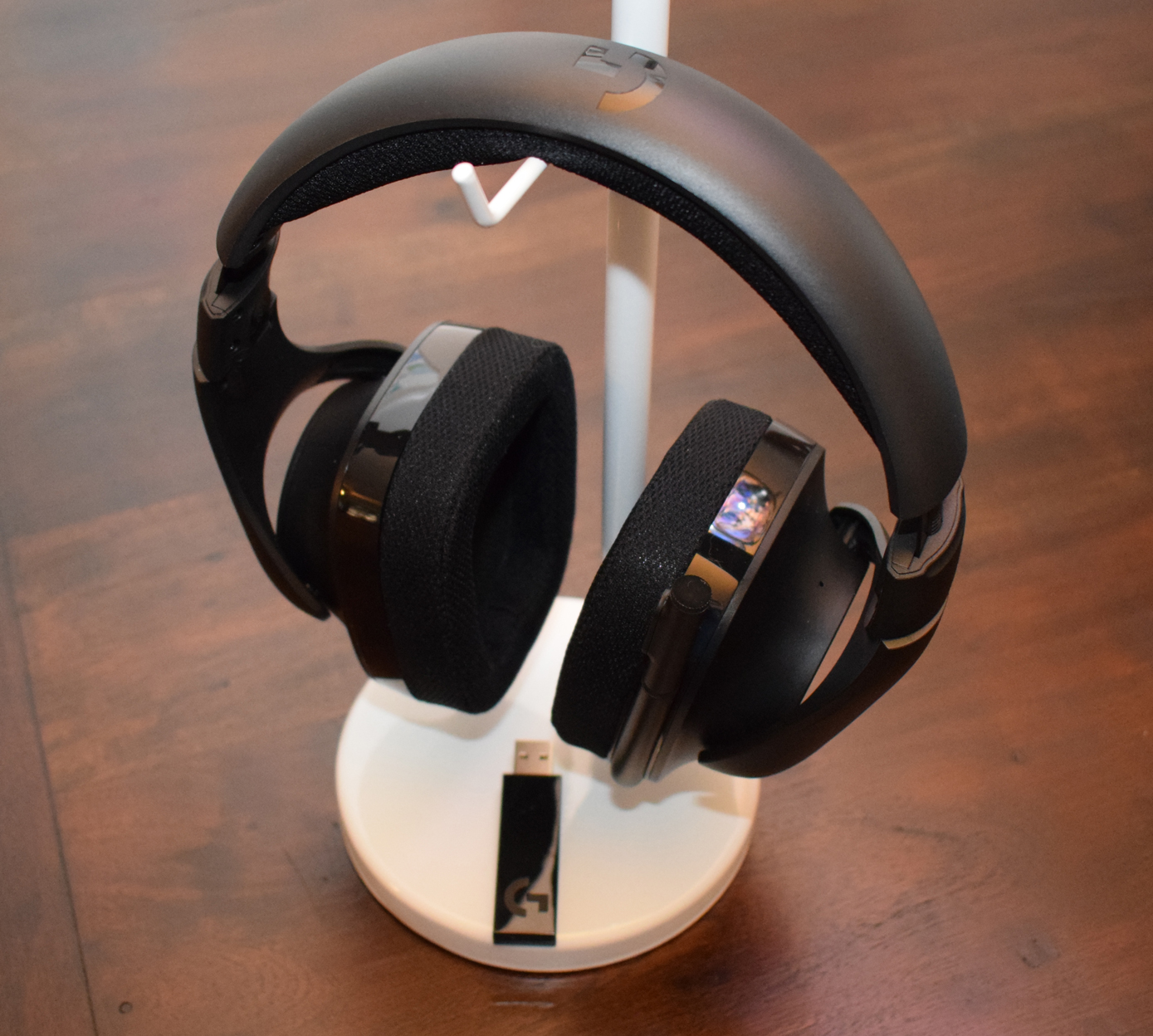 The G533 Wireless Gaming Headset uses a small USB transmitter to deliver wireless audio. When combined with Logitech Gaming Software, the G533 offers DTS Headphone: X, and thus, the two 40mm Pro-G drivers can offer 7.1 surround sound. The headset itself is a lightweight design with an extendable flip-up mic and onboard controls. 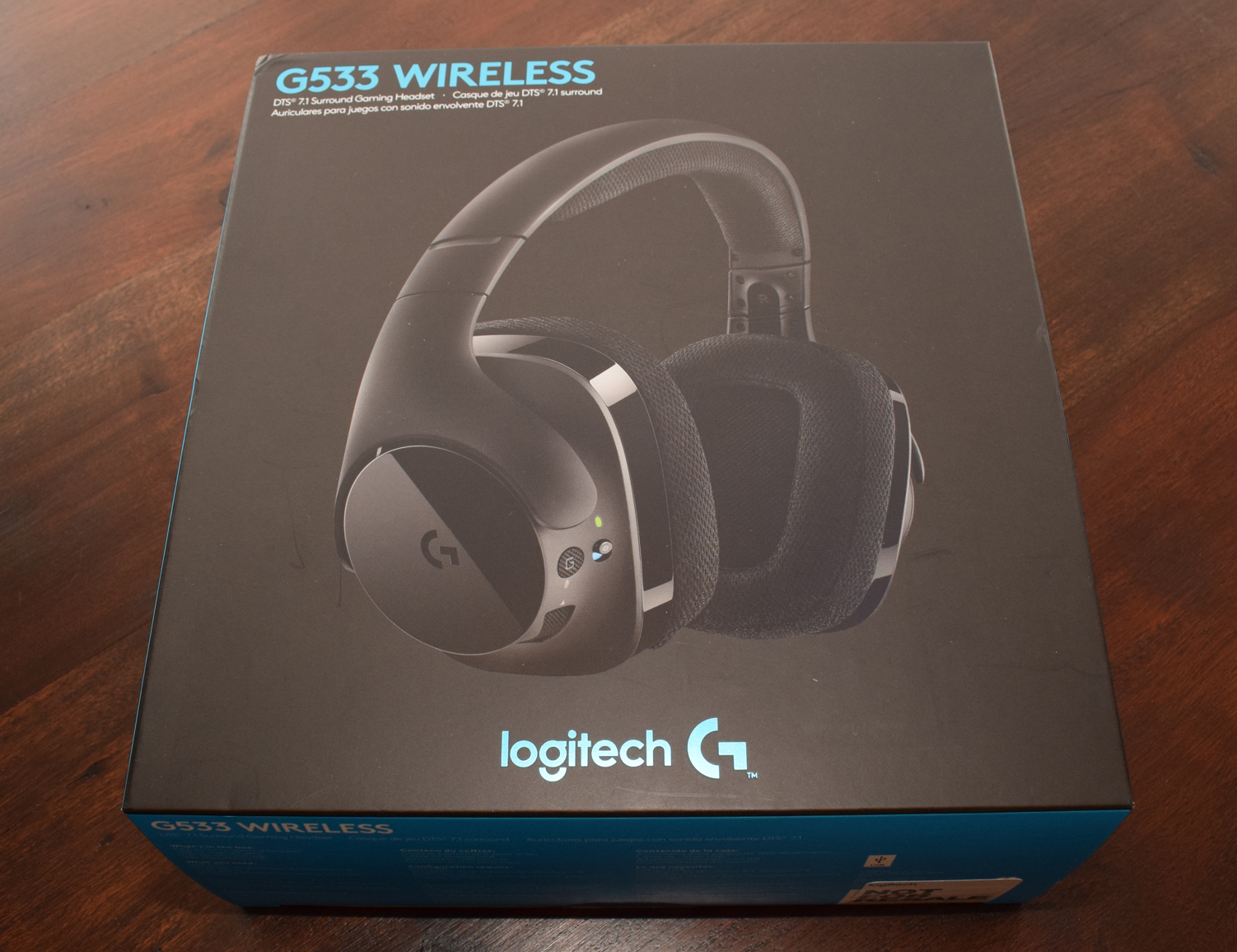 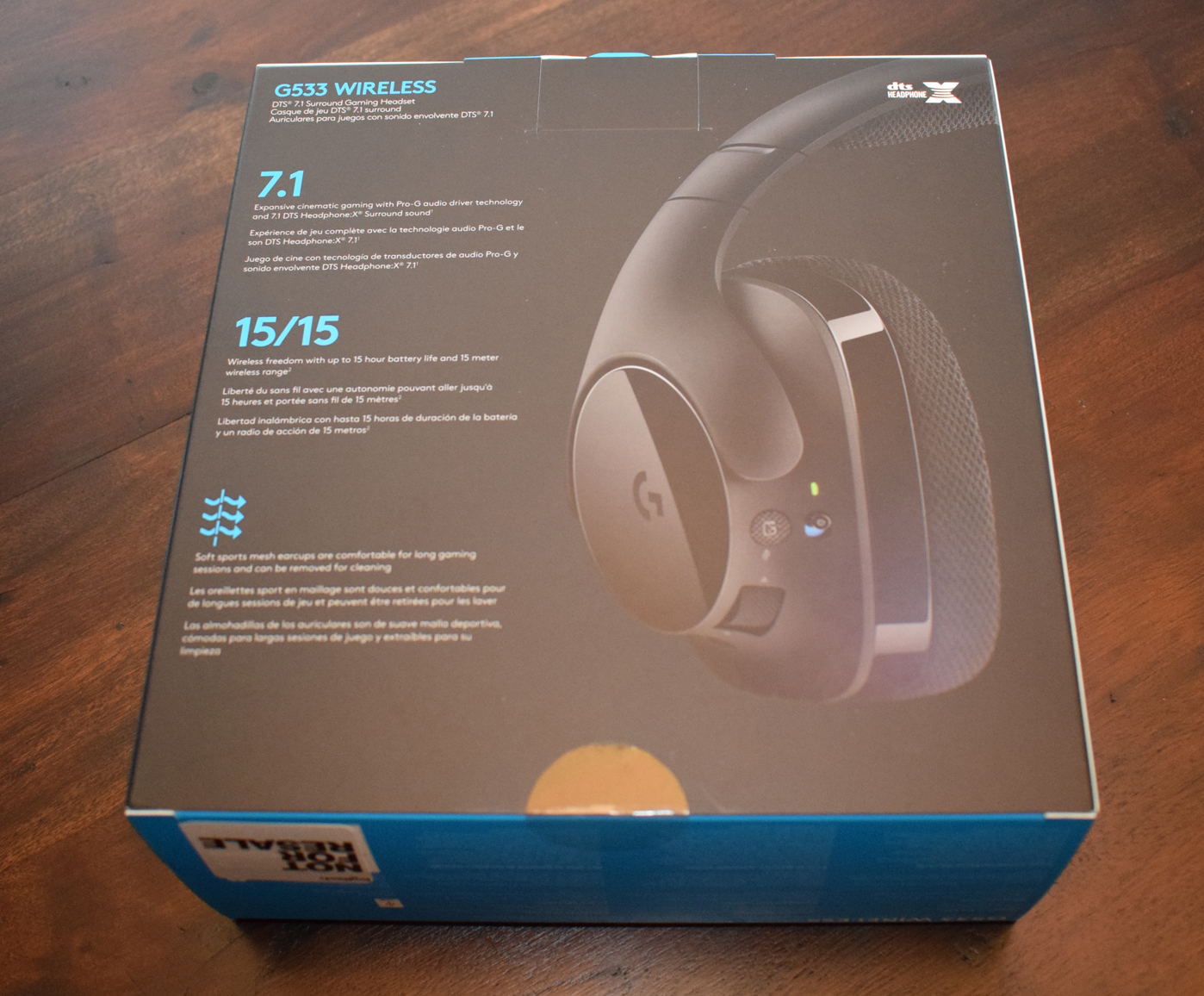 For all intent and purposes, what comes in the G533 box are two items: the G533 headset and the USB transmitter. There is also a micro USB cable and some documentation, but it's the headset and transmitter that really matter. The other important piece is the Logitech Gaming Software, but headset itself is basically ready to rock right out of the box. In the name of best practice, it's worth charging the headset for several hours before first use, but otherwise, the ear pads and removable battery are packed in the headset ready to wear.

Likewise, the built-in mic really couldn't be any simpler to deal with while still offering the user control. It flips down and extends for use, but when flipped up, it's not only muted, it's also so out of the way that it's easy to forget that it's there. 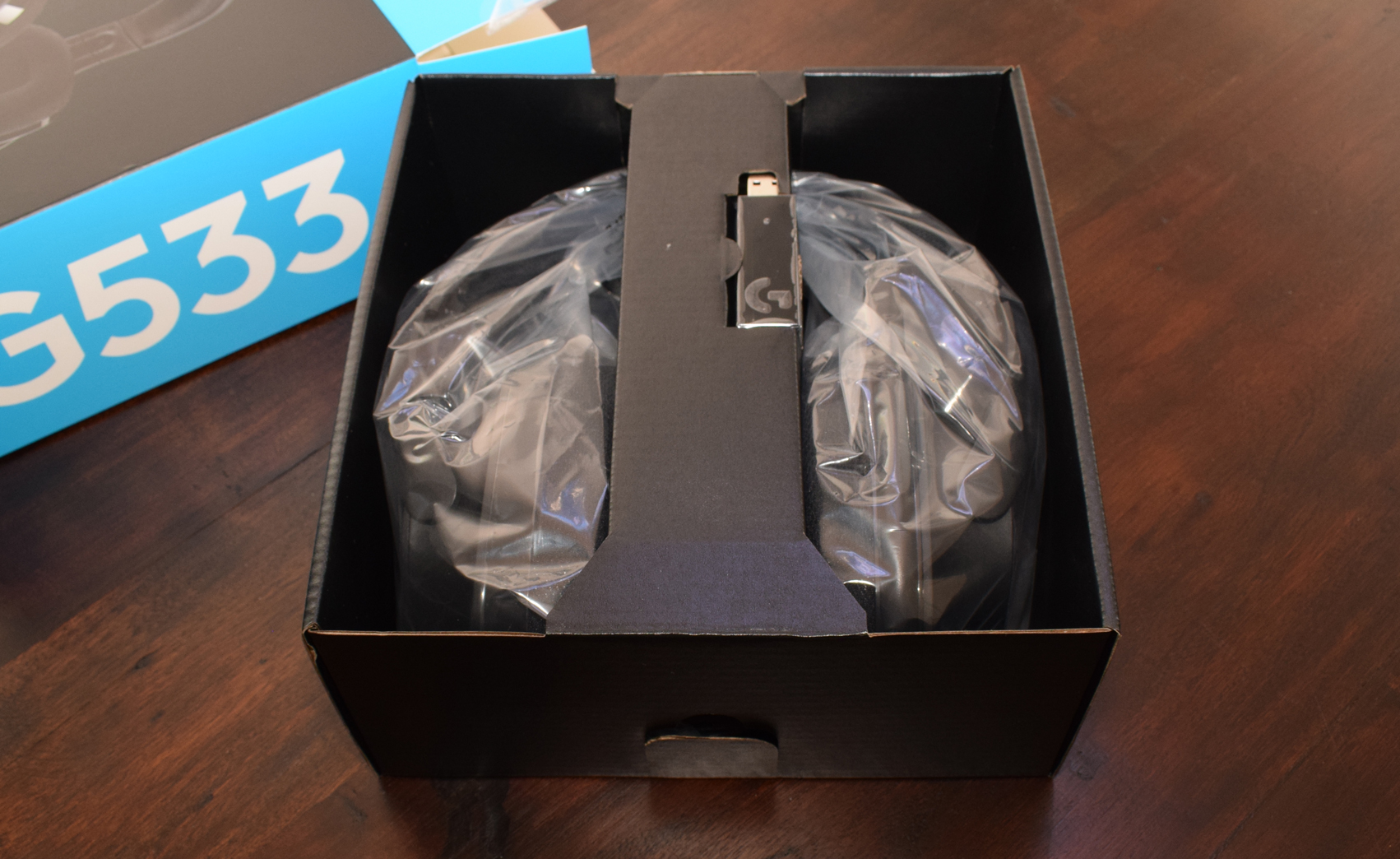 No doubt, the G533's onboard controls are also very straightforward. There is a power switch and light, a volume wheel which by default beeps when used, and a single G-button, which by default will mute the mic. 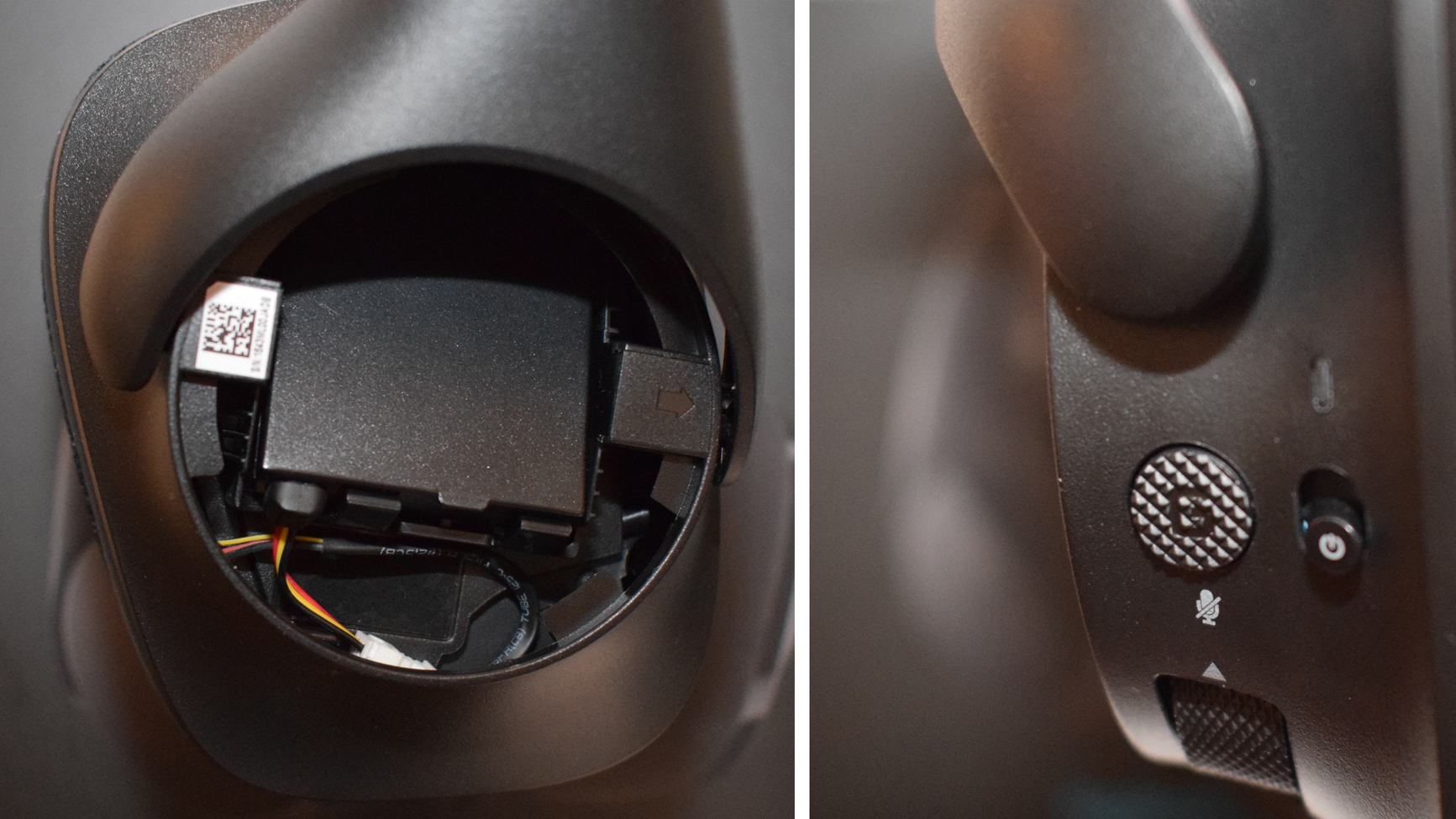 Because the mic is muted when flipped up, it's an easy option to reassign the G-button to something else and, of course, that's done in the Logitech Gaming Software. The LGS is profile-based, so in general, I like the G-button to serve as Play/Pause, but in some cases, I'll set it up to something as specific as a toggle for subtitles. I'm not normally a fan of software bundles, but the LGS isn't an extraneous bit of junk. It can be used to specifically monitor battery usage (in milliamps), and to set the EQ either by included preset or by way a user-created one. (Of which there seems to no maximum number.) The G-button can also be set to toggle on and off the EQ, or even the DTS Headphone: X Surround Sound. That's an excellent feature to have, especially while learning the ins and outs of the G533. 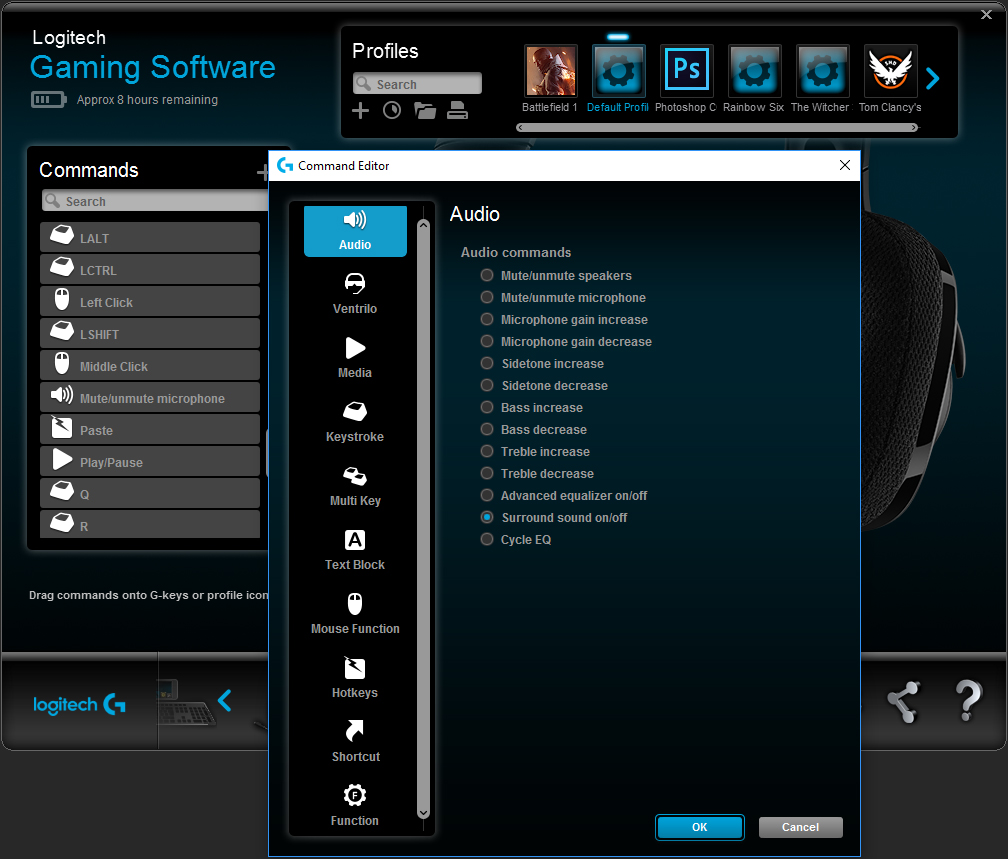 The G533 is the opposite of a swiss army knife. It doesn't do consoles or even a smartphone, and it doesn't do anything wired. The G533 is wireless via a Windows PC. (Windows 10 & 7 were used for this review, though 8.1 is also listed as supported.) The idea is to streamline the headset, which is important for the weight, the battery life, and even for the longevity of the headset, but it's also key in making sure the headset sounds its best. For example, in contrast to many gaming headsets, Windows sees the G533 as two things, a 7.1 audio device and a microphone. That's it, and believe me, that means that plugging in the USB transmitter should never be a case where the user gets stuck on a sound-crushing chat channel.

Logitech is very proud of their current wireless standard, which is a highly modified 2.4 GHz, and unlike many wireless headsets, the G533 is meant to excel when faced with heavy doses of electromagnetic interference. In effect, this headset can leave home and go out into the cafes, restaurants, and even into the con/tournament scene.

What's more clear is that with the surround sound off, the EQ set to flat, and Atlas Genius' 'Trojans' cranked up, the Pro-G drivers deliver with poise. Pushing the bass up and taking some Mt. Eden through the G533, and the ability to deliver bass without the crush is again impressive. 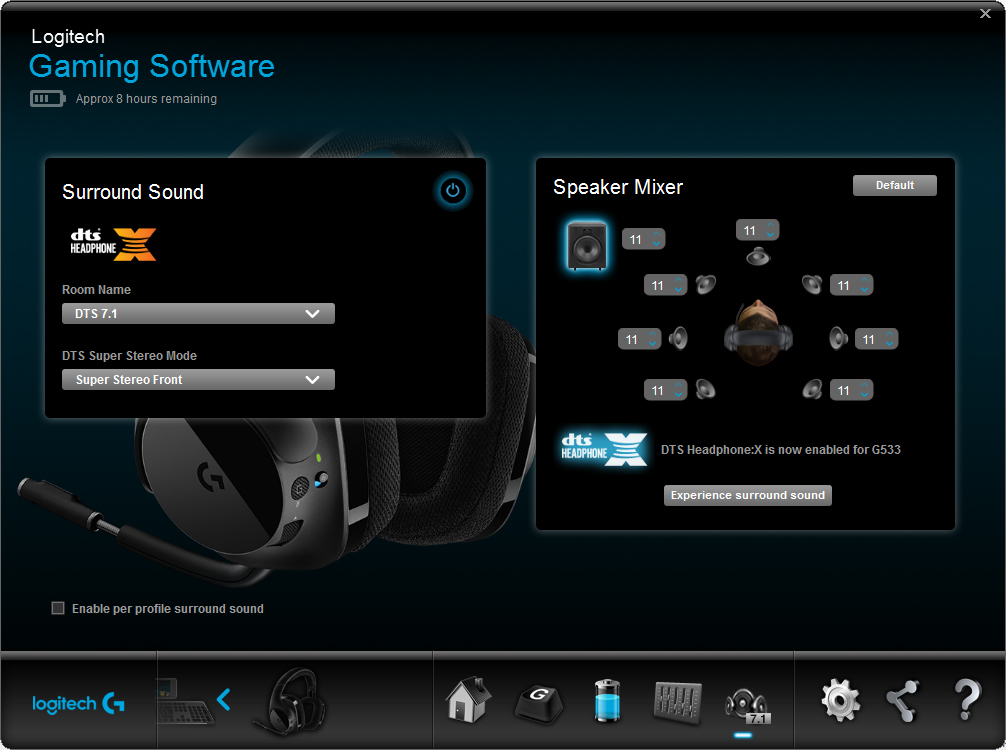 Firing up 'Westworld' (on HBO Now), and it putting in the background, and I can hear the train in the distance, the wind on the plains, I can hear each borrowed bit of score as well as the ragtime bleed, and I can compare the livestock speak to the less stilted guest dialog. It's not a home theater, but rather, an approximation. This a mature, focused DTS: Headphone X design that makes great use of the PC source.

It almost goes without saying that the G533 is right at home in 'Rainbow Six.' When a bullet flies by and sinks in some plywood, I can look towards the shooter. When trying to defend a rush, I can still talk to my teammates.

Logitech worked with EA and DICE to get a Logitech G sound profile into 'Battlefield 1,' and it is hard to argue with the results. Leading my tank crew through the fog, I can pick up the German chatter, and attempt to sneak over and silence it. When things go awry, the sound of the guns near and far really help sell that chaotic Great War setting. 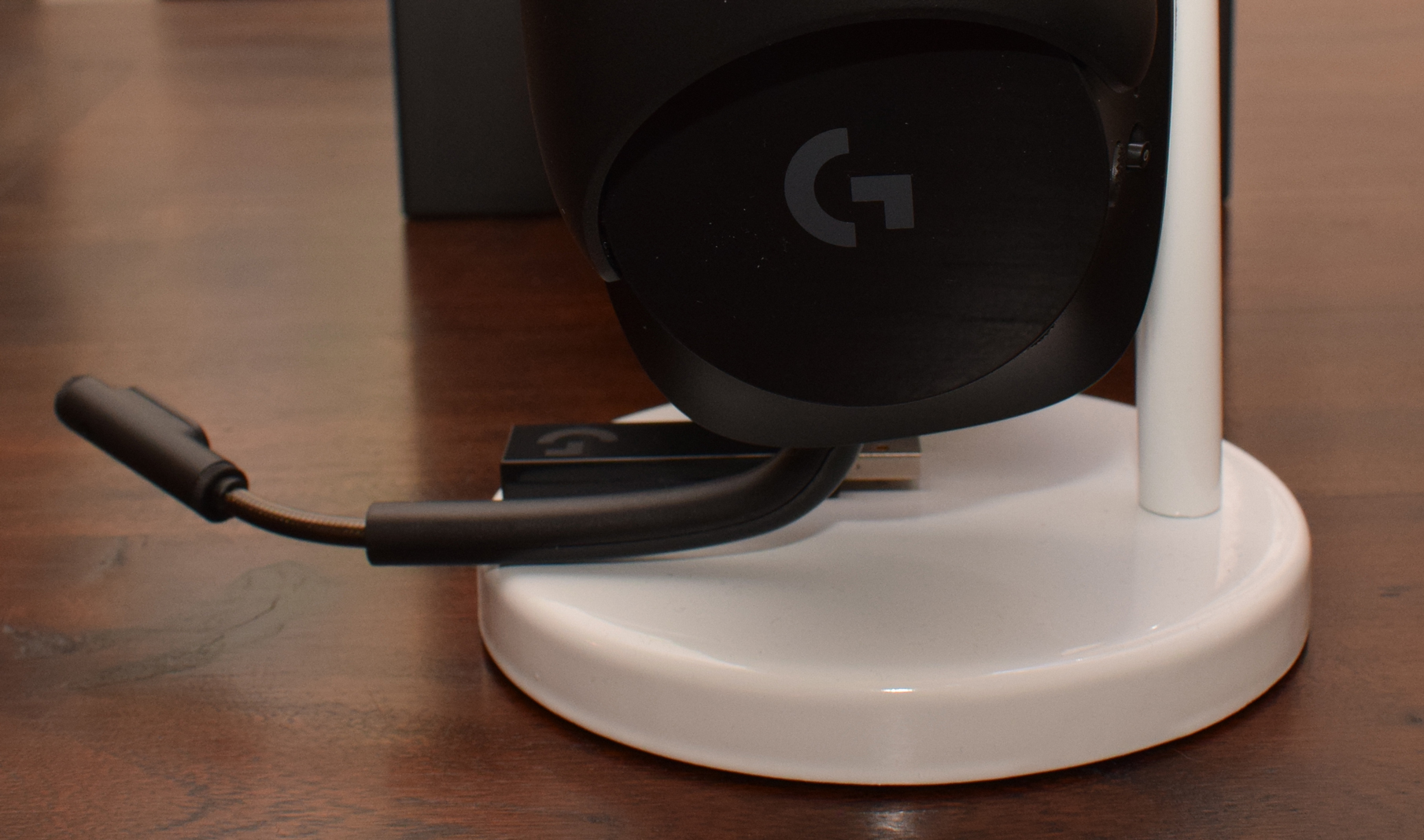 The mic has a built pop-filter which I certainly like more than having to deal with a bit of foam. Like the rest of the G533, the mic stays exactly where I put it.

The sports mesh ears on the G533 are breathable while still forming a nice sound pocket. The headset folds flat, is balanced, and reasonably light. It's a metal band under a plastic shell, but everything feels made to spec. The plastic on the headband manages to seem heavy duty and light. The band adjustments stay in place, but offer room for much larger heads than mine (which isn't always the case). The battery, which does indeed last the promised 15 hours, is user-serviceable and the ear pads can also be removed and cleaned or replaced. This is standard for Logitech, but it's worth pointing out as those of us looking to keep a headset going for years will be well-served by these characteristics. 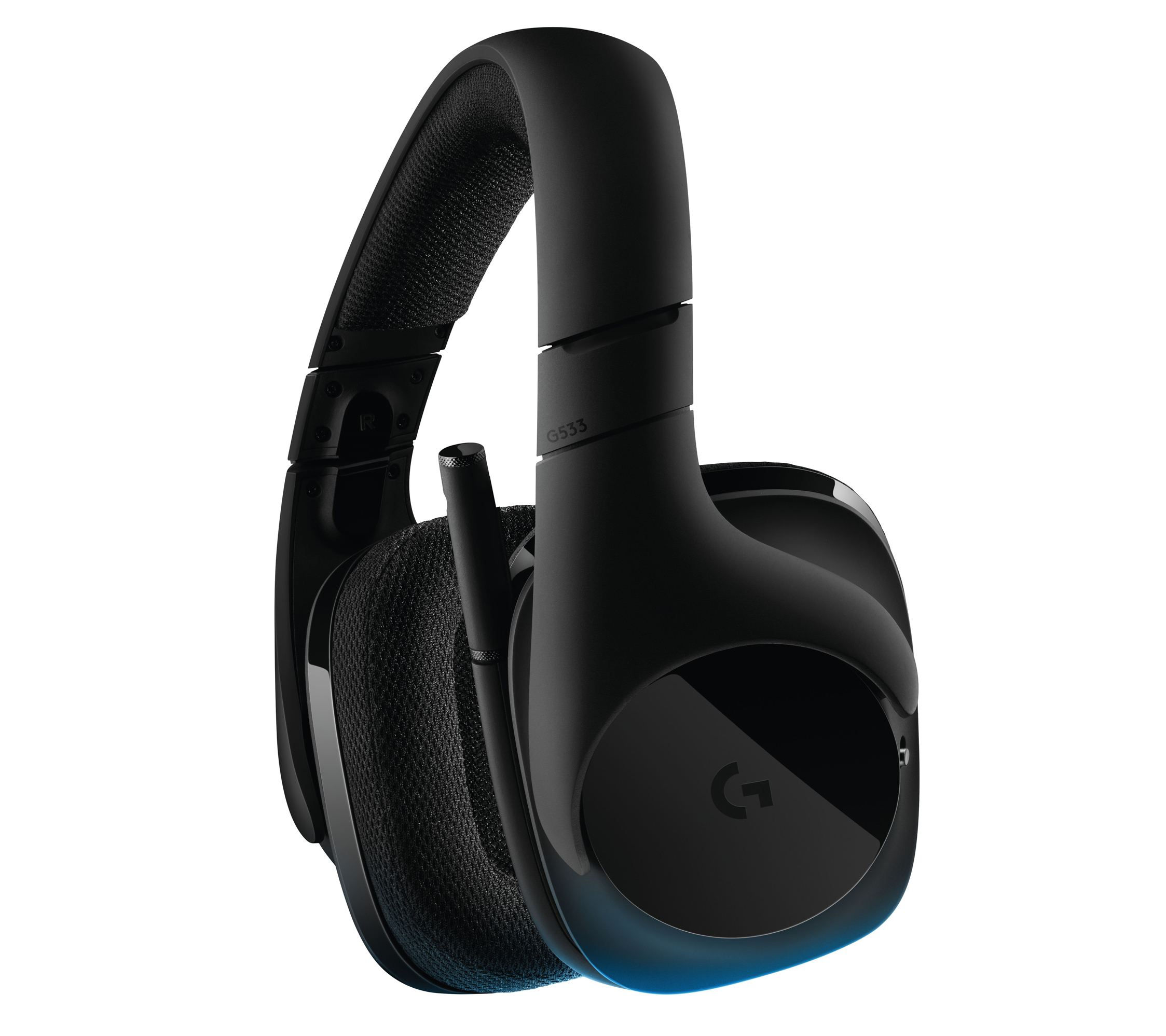 Not only does the G533 do without the RGB light craze, but it's mainly flat black look appears to balance out sleek and restrained. The G533 does not ape a lifestyle headset as the look is purpose-focused with just a few hints of sculpting. 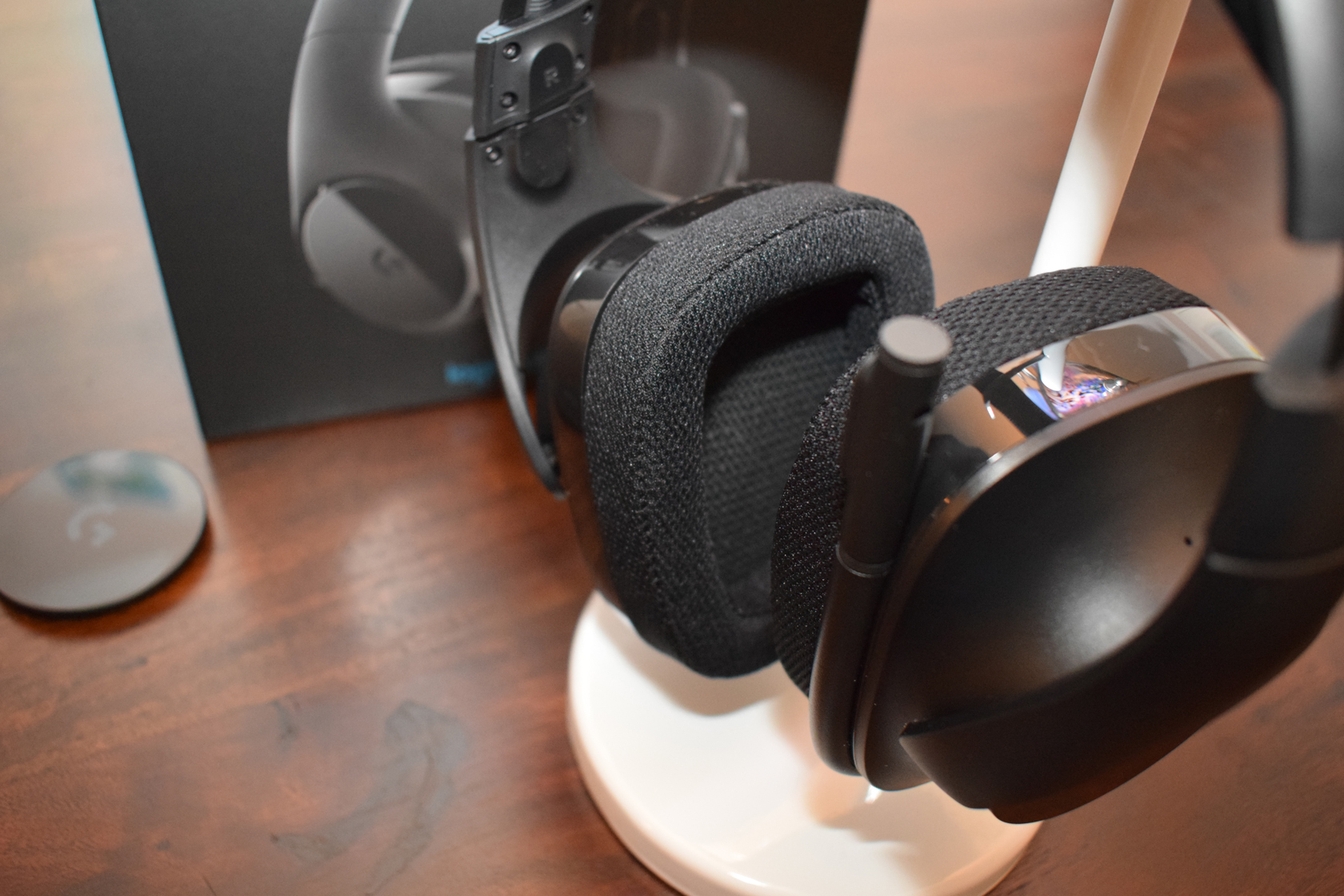 With the G533, Logitech has shown that the core user looking for a no-nonsense high-performance wireless PC headset hasn't been forgotten. Whether in stereo or in DTS:Headphone X Surround Sound, the G533 is excellent for gaming and no slouch with other media.

Sale Price 69.99
List Price 149.99
Buy Now
3rd Party 67
In Stock.
See what people are saying about this story or others
See Comments in Forum
Previous Next