Picking out a new television is bittersweet for most of us. There are a variety of features, and we always want the best option for the best price. If you're an early adopter, chances are that you've paid a pretty penny to be first on the block to have the latest and greatest television or receiver, but wait a few months or a year, chances are prices have drastically dropped to more affordable pricing levels.

UHD or 4K debuted only a few short years ago with premium pricetags (and without defined format specifications), but prices are dropping quickly thanks to companies like Vizio. Known primarily as a value brand, Vizo has been offering performance features that compete with much more expensive displays, which brings us to the 2016 Vizio D-Series Ultra HD Full-Array LED Smart TV, aka the D65u-D2. This is a 4K 65 inch Vizio TV that currently MSRPs for $1,099.99 and has been on sale for less.

Yes, you read that right.

A 65 inch 4K television at this price point is remarkable, but does it have what it takes inside and out to be a top of the line TV?

Yes it does, despite a few minor complaints.

Before we get on the review, I'd like to point out that, under 65 inches, I personally recommend getting a plain ole 1080p HDTV. Reason being that, at most seating distances, you're not really going to see a big difference in the pixel or contrast rate with a smaller television that is 4K. To really get the big picture and full immersion of a 4K television and all its glory, you will need a television that is 65 inches, or larger, to get the full effect. 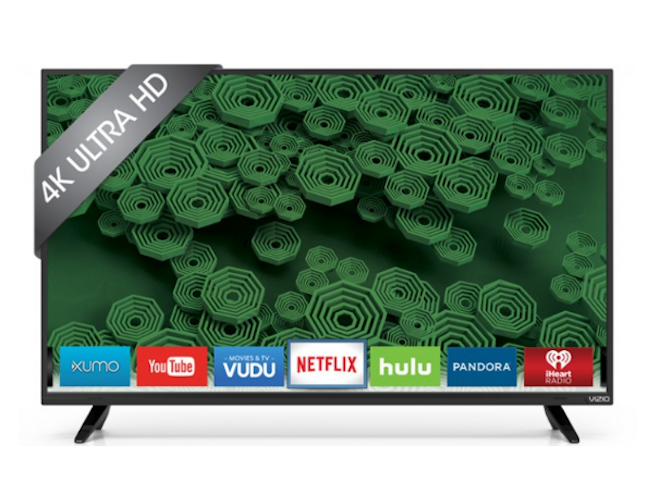 There is a V6 six-core processor made up of a quad-core GPU and a dual-core CPU, which makes every action and motion on screen fluid and smooth. Lastly, we have Vizio Internet Apps Plus, or VIA, which includes Netflix, Hulu, YouTube, Pandora, VUDU, iHeartRadio, and more, all of which are easily accessible when the VIA button is pressed on the remote.

At this price point, I didn't really expect metallic high end finishes, like we've seen with some Samsung models, but design is one of my minor gripes. The Du2 series wraps the screen in a half-inch flat glossy black plastic frame with a slightly thicker mate black bottom edge, housing the indicator light and remote sensor. The stand has two wide V-shaped black metal legs and holds up the television nicely, but make sure not to set them too close to the edge of your cabinet or TV stand. You can also securely put it on the wall with ease, using a 400mm x 400mm wall mount.

Around back, you will find the power source on the right, while all of the inputs and outputs are on the left side. Two HDMI inputs, as well as a composite/component video inputs, face to the left of the side of the television and are well marked. Three additional HDMI inputs, optical/sterreo RCA audio outputs, Ethernet, and a coaxial cable antenna port face downwards, which was a little annoying in that it was a tiny bit difficult to connect the devices in those ports, due to the angle.

The remote control is nothing fancy either. Rather small, slim, a combination of glossy and matte black coloring, there is a square navigation pad with menu buttons to go around. They are large enough that you won't be pressing the wrong button by mistake. There are also stand alone buttons for Amazon, iHeartRadio, and Netflix as well. It's easy to memorize and use, however there is no backlighting to the remote in case you're in the dark.

The setup process is extremely simple thanks to the easy-to-read guide and self-explanitory main menu instructions. Wall mounting was also easy, requiring just two other people to hold the tv in place and one to screw in the screws. Everything is nicely labled and simple. The whole set up process didn't take long at all, including configuring the WiFi, and was a satisfying experience. 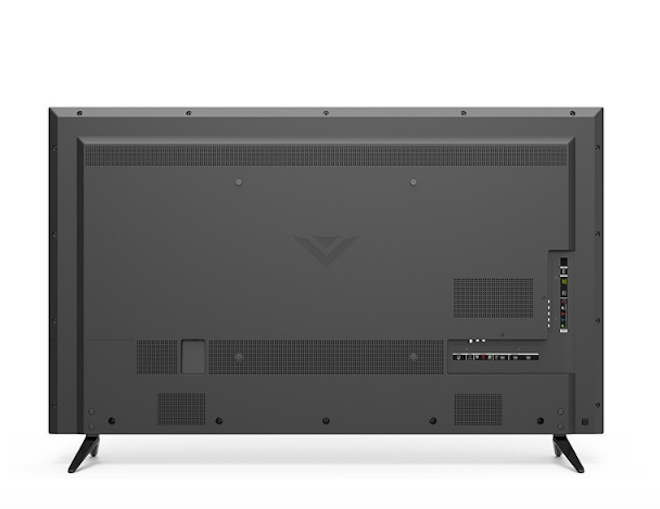 While not as bright as some of the Samsung TVs I've used, the D65u-D2 is fairly bright and works well for most rooms. Under extreme lighting conditions, such as a room surrounded by windows with daylight pouring in, glare reduces some details, but most of the time that's not the case and brightness and black levels perform admirably.

Out-of-the-box calibration is also quite good, though you'll probably want to get your's calibrated to Rec. 709 specifications. Colors look great across the spectrum. Blues and greens pop, however some of the reds seem to bleed over into either pinkish or orange color, specifically on live television. Lag-time for the gamers is around 18ms, which is actually pretty good for a large 4K television, but hardcore gamers might want to stick to a computer monitor.

I put in 'The Smurfs 2' as well as 'The Amazing Spider-Man 2' in 4K, while using this television and the Samsung UBD-K8500 Blu-ray player. Image qualtiy was spectacular. Lines and textures in the animated cloth hats on the Smurfs looked ultra realistic and smooth. You could even make out the shadows and imperfections in the clothing and movements, even in darker sequences. There was a fluid range of motion and color throughout the entire film on this television.

'The Amazing Spider-Man 2' also looked amazing on this TV, with the bright shots of light that flashed into the darker scenes, such as Electro's lightin. Spider-Man's suit look incredible as well, as every intricate detail moved when he moved and could be seen easily in 4K. Colors were bright and bold throughout as well. I also popped in a standard high-definition 1080p copy of 'Star Wars: The Force Awakens', and the up-conversion looks great. I wouldn't go as far as that it was true 4K or really added to the overall vividness or sharpness of the picture, but it looked well-balanced, color-wise, and the detail was always clear, from the sand dune of Jakku to the green and blue pastures of Maz Katana's home planet.

Using the WWE App on an Apple TV, I watched a pay-per-view event in HD, and the up-conversion was spectacular. When confetti or smoke entered the picture when a wrestler came out, it barely became pixelated or murky. Bright lights and wreslter costumes looked vivid and bold.

To access the TV's internal apps, press VIA on your remote to bring up an apps toolbar on the bottom of the screen. Amazon, Netflix, Hulu, Spotify, Vudu, and various other are available. It's a good bunch of apps, though the icons themselves appear murky and pixelated, but not as deep a selection as Roku or Apple TV. Also, given Vizio's switch to Google Cast on the new P Series and M Series, I suspect this will be one of the last Vizio generations with built-in apps.

For this review, I fired up Netflix to watch their UHD programming options. 'Daredevil' is a very dark show, both visually and tonally. It was easy to see individual strands of hair and textures in costumes even in these dark scenes throughout 'Daredevil', which was amazing. 'Fuller House', with its almost cartoony bright primary colors, is eye candy too. It looks incredible, with fluid motions and colors, never being over-saturated at any moment.

This D65u-D2 model puts out an average of 190 watts under your brighter conditions, which looks great for any mode of TV watching you want to use. Like all 2016 Vizio models, you won't find 3D capability. Try to watch a 3D movie on this TV and you'll get an error message. And, this particular series does not offer HDR capability (neither HDR10 nor Dolby Vision). 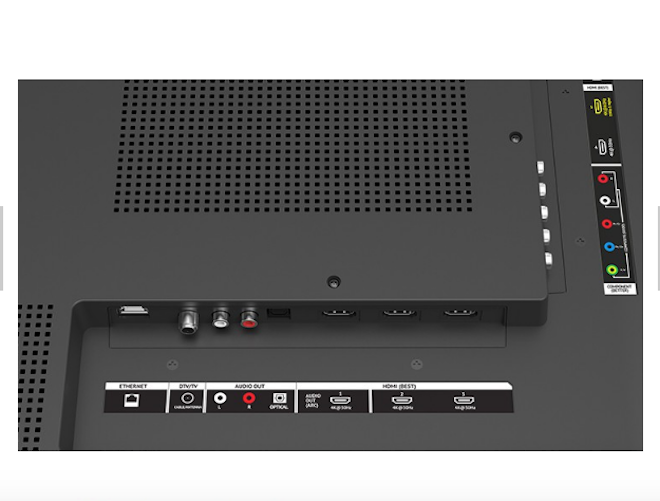 Vizio has come a long way over the years and, as of 2016, offers some very big televisions for great prices. The D65u-D2 might not have 3D or HDR, but it sure does give Sony and Samsung a run for their money in every other way, shape, and form. Picture quality is great, with above average brightness and black levels looking rich throughout. Colors are vivid and bold. And 4K just looks marvelous on this 65-inch screen.

It's as if you're watching these movies for the very first time.

What small gripes I had could all be ruled out thanks to this $1,099.99 MSRP (and often sub-$1,000 sale pricing). If you don't need 3D or HDR for your display, the Vizio D65u-D2 model is definitely one to consider and comes HIGHLY RECOMMENDED for entry-level consumers and/or anyone looking for a secondary display. It really is an incredible television with most of the bells and whistles you could ever want.

Sale Price 900
Buy Now
3rd Party 900
In Stock.
See what people are saying about this story or others
See Comments in Forum
Previous Next