When Creative introduced the iRoar intelligent Bluetooth speaker at CES 2016, there were a few key accessories on-hand to go with the unit. One such accessory is the comparatively large iRoar Rock. The iRoar Rock is both a rapid-charging charging dock and a powered, ported subwoofer. It connects to the iRoar via the iRoar's docking expansion port, and the combined result is certainly not what comes to mind when thinking of Bluetooth speakers.

Cutting right to chase with iRoar Rock, the subwoofer dock has a lot going for it beyond performance and functionality. There are two things to know here. For me, seeing the unit in action, with its exposed 3.75" driver working frantically while the docked combination sits with poise on a desk, credenza or other table makes for a fascinating joy. Like an exposed piston engine, the iRoar Rock lives in a space floor-bound subs can only dream of. I would guess that anyone who has spent time shopping for subwoofers would be fascinated by the iRoar Rock port steadily pushing air in rhythm to the music.

The other thing to know is that this is a very straightforward unit. Plug in the power cord, flip the power switch on the back, and place the iRoar in the dock. That's it. Because the iRoar has the brain, the source, and the controls, all the iRoar Rock does is supply charging power and bass. It's basically a slave to the iRoar, and happily, the iRoar can be put in, or picked up out of, the dock at any time. 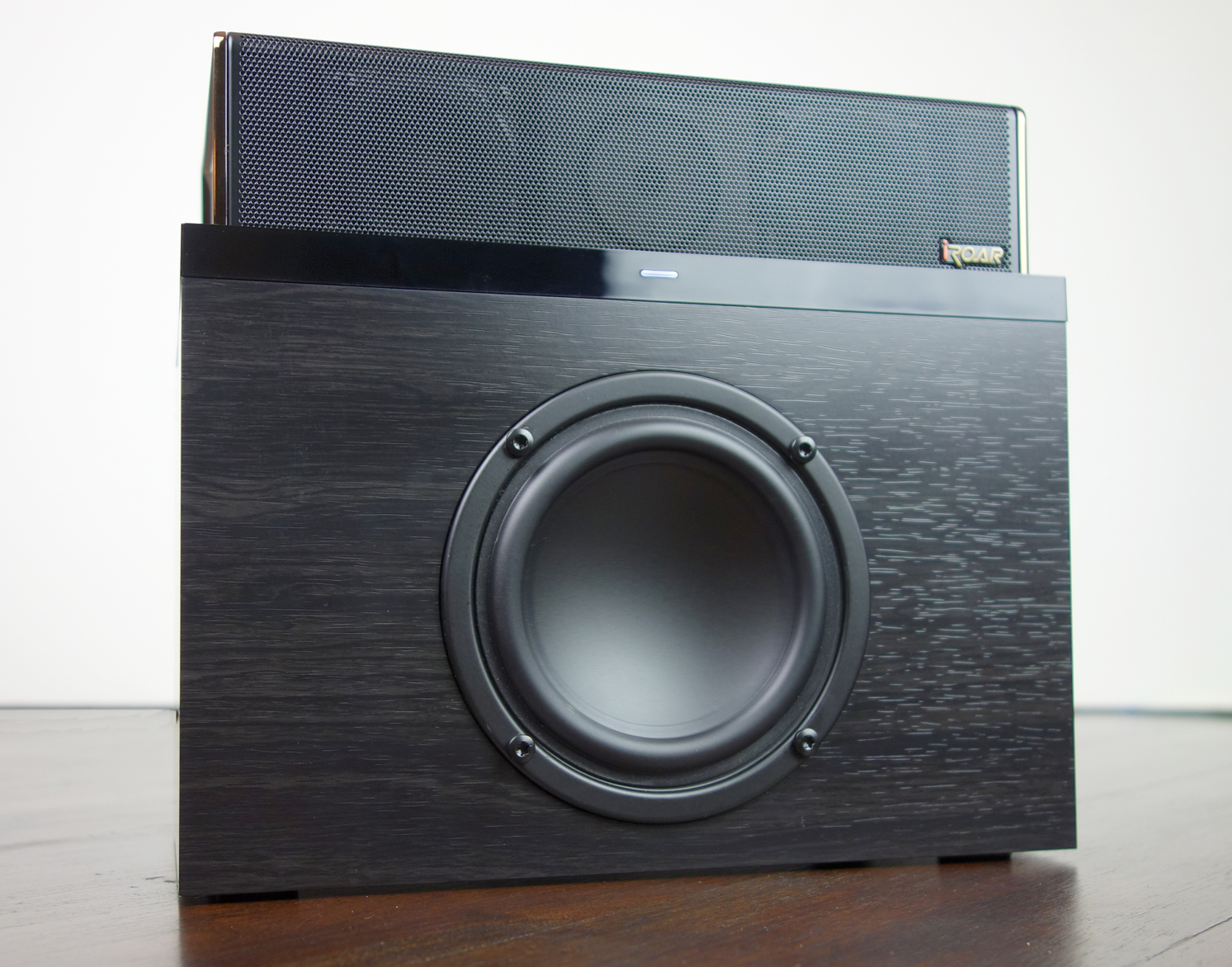 This all speaks to incredible usability. For my tastes and my review, I went ahead and turned Roar off on the iRoar using the touch controls, and used the iRoar Dashboard Android app to change the EQ from BlasterX to Audiophile Bliss. There is also, of course, a custom EQ in the app, but basically, these are the ways to modulate the bass of the Rock. There is no volume knob or crossover adjustment. 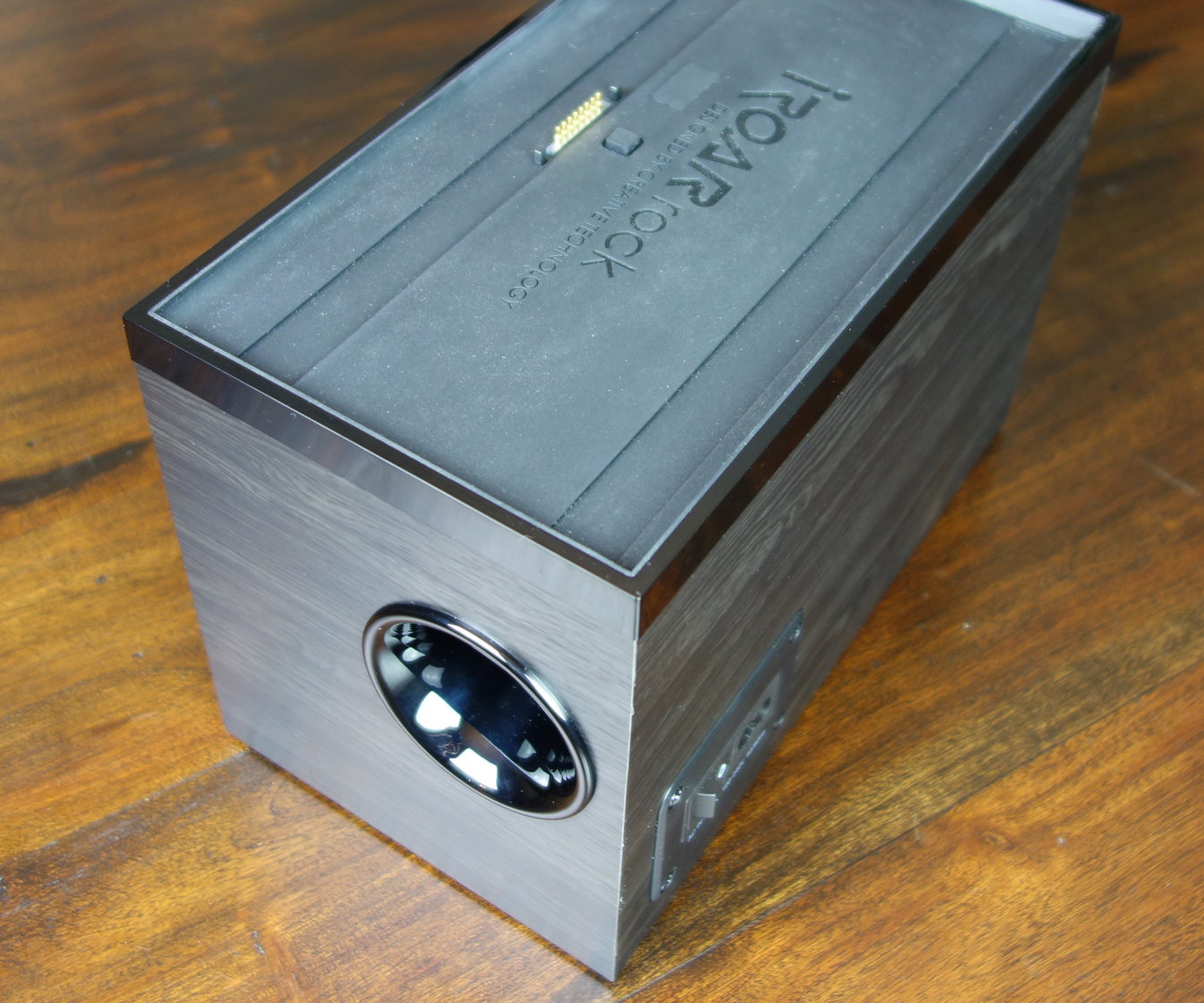 Using a connected phone to control and fine tune fits in within the iRoar's design, so I'm quite comfortable with the idea. Should the app's controls grow to include something special for the Rock, I'd be happy with that as well.

As it is, it would be child's play to set up multiple iRoar Rocks around the home or in different locations, and each Rock would be ready to be slave to the iRoar once docked. When using Bluetooth or the memory card, the iRoar and Rock make for a very clean set-up, but there are no other connections or duplicated connections on the iRoar Rock (such as there would be on a laptop dock). That means that when using something like the optical connection on the iRoar while the iRoar Rock is in the dock, it's a little less clean and a little more cumbersome. Everything is still in the back, so it's not untenable.

If I had to choose between replicated ports on the Rock that came bundled with a more complicated and expensive design, I'd certainly go for how the unit is now. 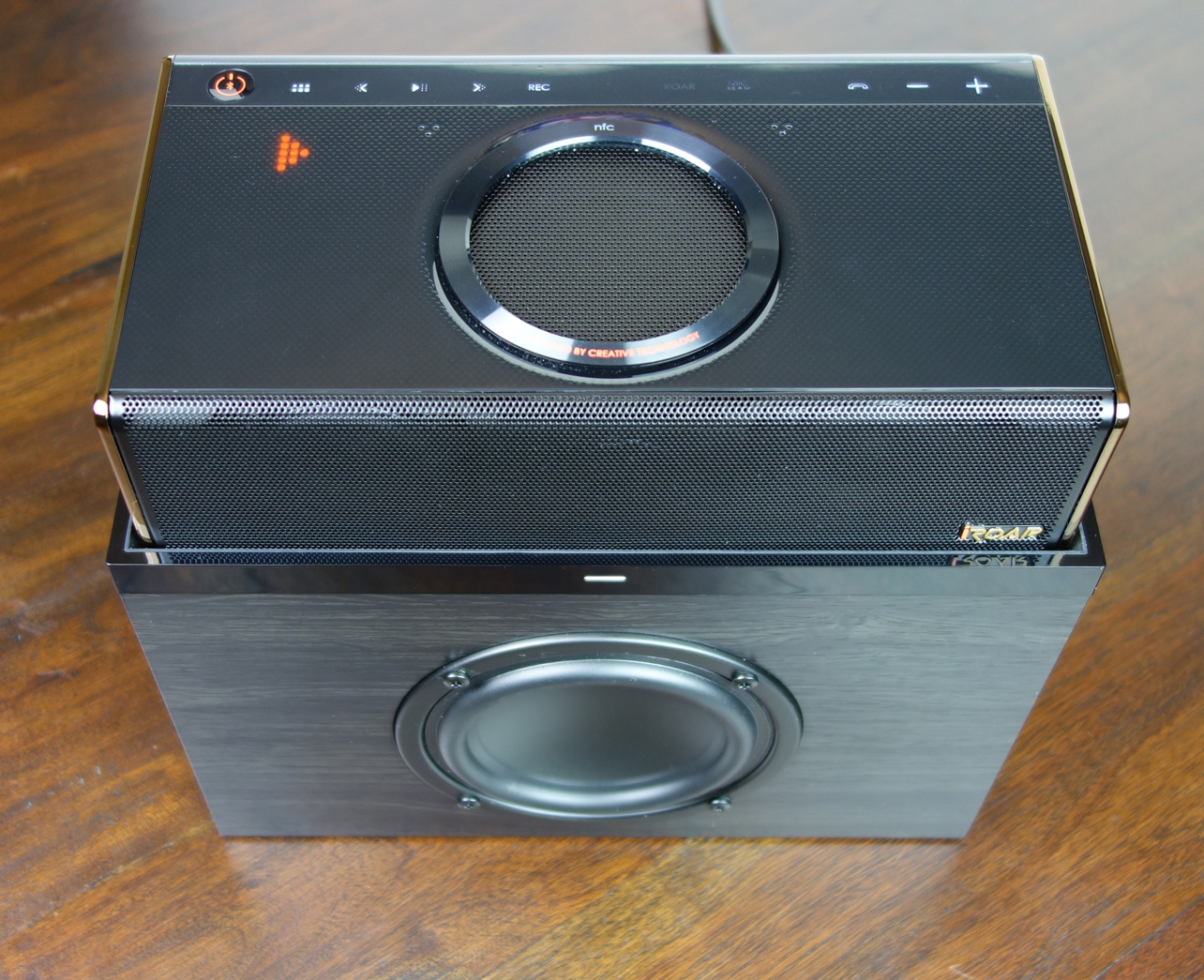 By Creative's numbers, the rapid-charging ability of the Rock cuts the charge time down from 3 hours to hours 2. The iRoar has Li-ion battery, so in theory, frequent partial charges, such as when using an always charging dock, shouldn't be an issue. I suspect that the iRoar always uses its internal battery (for stability and simplicity), so when plugged in or in the dock and in use, it's charging. Thus, if the Rock driver is moving, the iRoar is charging. I do like the idea that if parked in the dock on a regular basis when not in use, it's very simple to just slip the Rock's power switch to off. (The power light upfront helps as well.)

The iRoar Rock's power supply is self-contained, so the plug is the nice, compact two prong variety. Not unlike some of Creative's other products, the iRoar Rock came with several different power cables (six in all), each suitable for specific common power systems around the world. 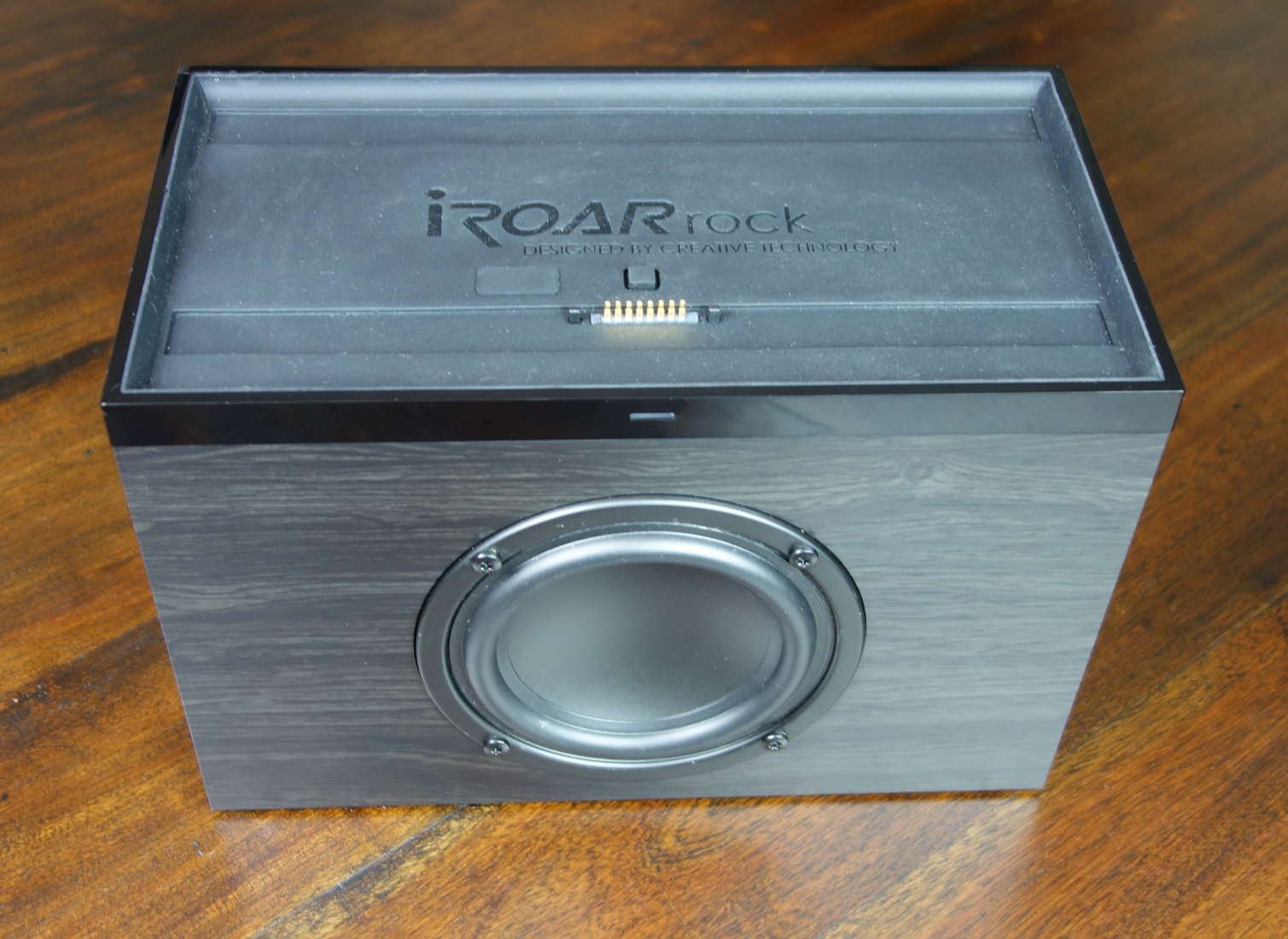 Creative Roar speakers tend to expend a lot of effort in outputting sound that is unlikely to be confused with "tinny." On its own, the iRoar can push an impressive amount of bass (even in a flat configuration) without turning into some kind of bass novelty. The difference when docking into the iRoar Rock is nevertheless quite significant. The Rock may be small compared with a home theater sub, but the effect in still dramatic. It's comparable in a way to going from cube satellites to proper bookshelf speakers, but that's still doesn't quite capture it. One of the big areas of improvement is vocals. The iRoar Rock does a wealth of good for vocals. Listening to something like The Eagles 'One of These Nights' or The Neighborhood's 'Afraid' and it can feel like they've gone from a three mic set-up to specific instruments. Having a powerful bass line and drum beat no longer crowds the strings or the singing, which is an upgrade for lows, mids, and highs.

In a pure setting, the iRoar still feels like the left and right channels are sitting right next to each other, but this can be tweaked with the 360 degree immersion setting in the Dashboard app. So anything that isolates and plays with the channels like Pink Floyd's 'Wish You Were Here' can be extruded a bit. This can come in handy if hooked up to a PS4 and playing 'Uncharted 4' for example as the sound stage is stretched wider while making enemies easier to audibly locate. The iRoar does well with front-focused content, but with the Rock, action scenes have a bigger punch and less of a likelihood to crowd dialogue.

One thing that is a little peculiar about adding in the Rock. The iRoar Rock takes the iRoar to another level in terms of room-filling sound. At mid to high volume, it's too intense to be as close as desktop speakers. But at the same time, with the sub up on a table rather than the floor, the bass is more localized. So normally, using the iRoar involves choosing where to place and face it (which can be further varied by the immersion setting). With the iRoar Rock, the listening position becomes much more important. The falloff for the bass by distance is more extreme than most 2.1 or 2.0 configurations, and here again, the Rock has no independent settings and must be managed via the equalizer. 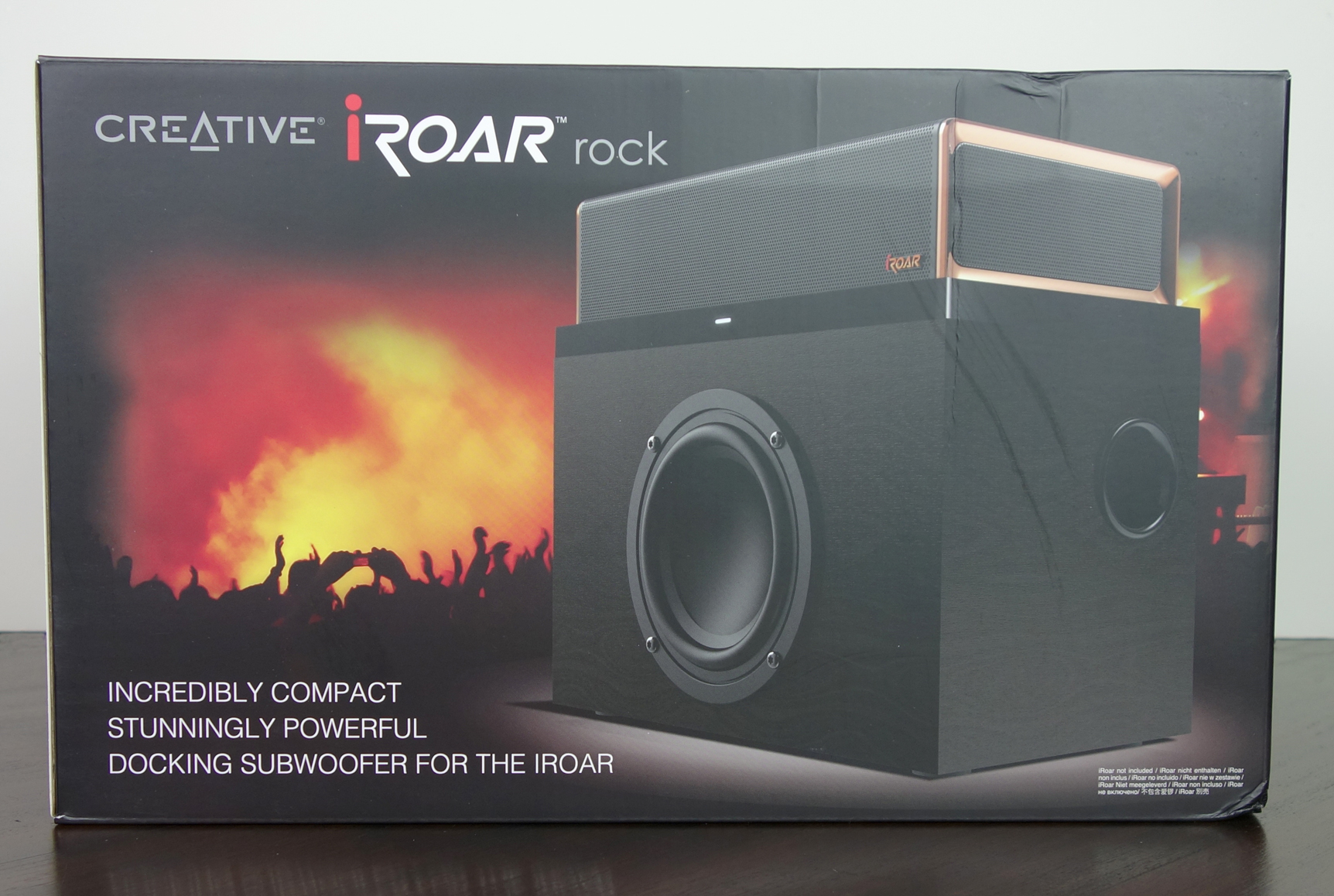 For any iRoar owner who regularly parks and uses the iRoar in the same place, the iRoar Rock is an easy recommendation. It has a strong amount of "wow, neat" presence, which is backed by impressive performance and near idiot-proof usability. It's the kind of accessory that lets incredible portable sound take command over an entire room.