This review was conducted using both the iRoar Bluetooth speaker (check out the review here) and the Sound Blaster X7.

The rechargeable iRoar Mic includes a notable mix of its own accessories, including a magnetic windscreen, a short microUSB cable, manual, and a neck lanyard.

Make no mistake, the Creative iRoar Mic is a plucky little accessory. As far as I have been able to draw out, it has two specific uses. 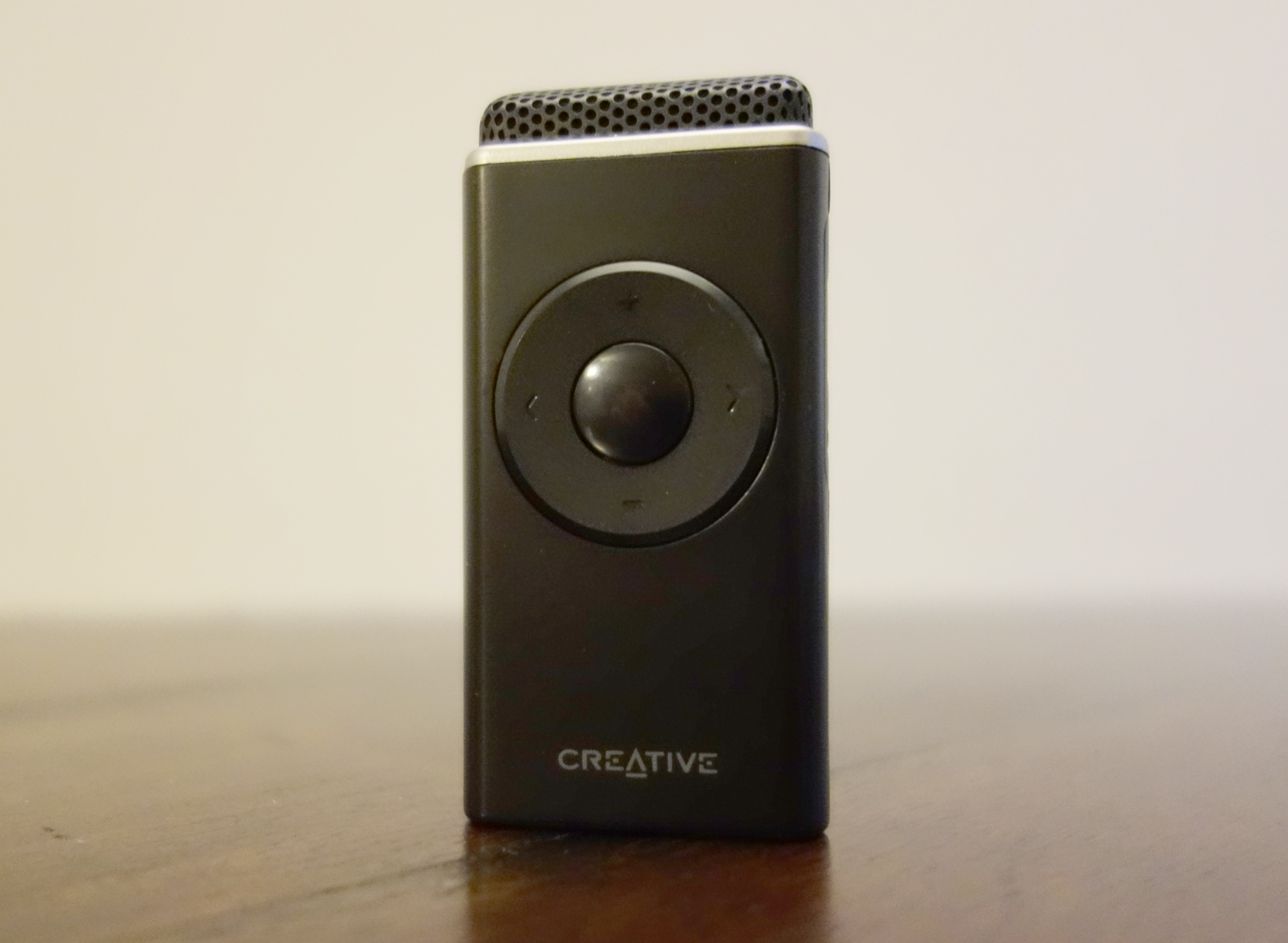 The first is as a personal PA system. It has a combination power and Bluetooth pairing button, and once I had it paired to either the iRoar or the X7, the tiny, electric razor-looking wireless mic gave me PA functionality.

The unit is small at 2.78" x 1.37" x .8" and extremely light at just one ounce. Even with the small size, the battery not only lasts for hours and hours, but also charges quickly via microUSB. The small dimensions and rounded body can make it feel small in my hands, but once in use, the focus becomes the mic pick-up and, to a lesser degree, the controls. Four front-facing direction buttons control speaker volume and mic sensitivity, the second of which is really useful, especially when handing the mic off to another person. 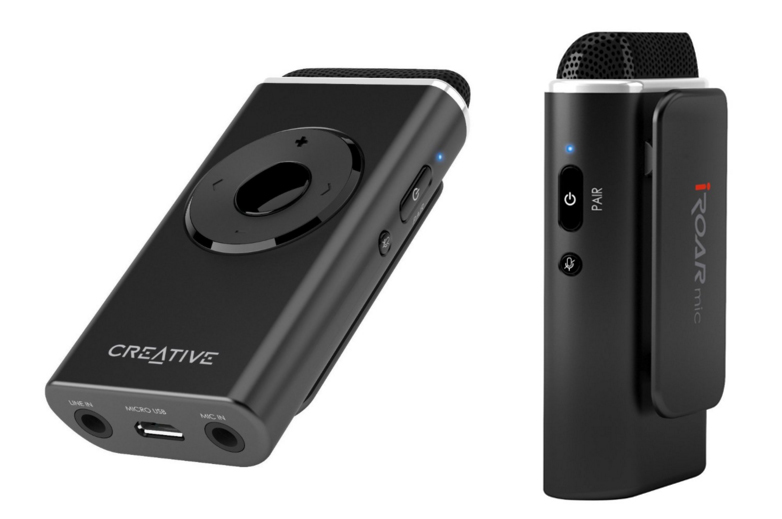 There is also a small mute button on the side, and a big button on the front for emphasizing sound. I'm glad to have the mute, though it is quite small. It's certainly tough to press on accident. A similar button just for pairing would be nice when switching between devices. The Emote button, on the other hand, seemed rather wasteful. Although the degree of voice manipulation can be adjusted via the iRoar Megaphone or the iRoar Dashboard apps (Android & iOS), the results were just too typically voice-morph for my tastes.

Good in the Home

Being Bluetooth based, the iRoar Mic is fairly straightforward to use, but also limited. It's the kind of personal address system that is useful to have at a friendly gathering like a shower or a Super Bowl party. It might be useful in certain small business settings too; however, it's not at all appropriate for a tradeshow environment or anywhere else likely to be saturated with Bluetooth. The wireless freedom is great, but if there are 50 other people there with Bluetooth and Wi-Fi transmitters, it's not going to be good for the mic.

That is sort of where the iRoar Mic's inherent flaw comes in. The actual iRoar Bluetooth speaker has its own built-in mics, but it does not have a mic jack. The same is true for the Sound Blaster Roar Pro. The X7 does have its own mic jack, but of course, it's not a rechargeable unit, and is also considerably less portable. Either way, the iRoar Mic is best suited for the kind of setting that isn't packed with competing wireless signals. 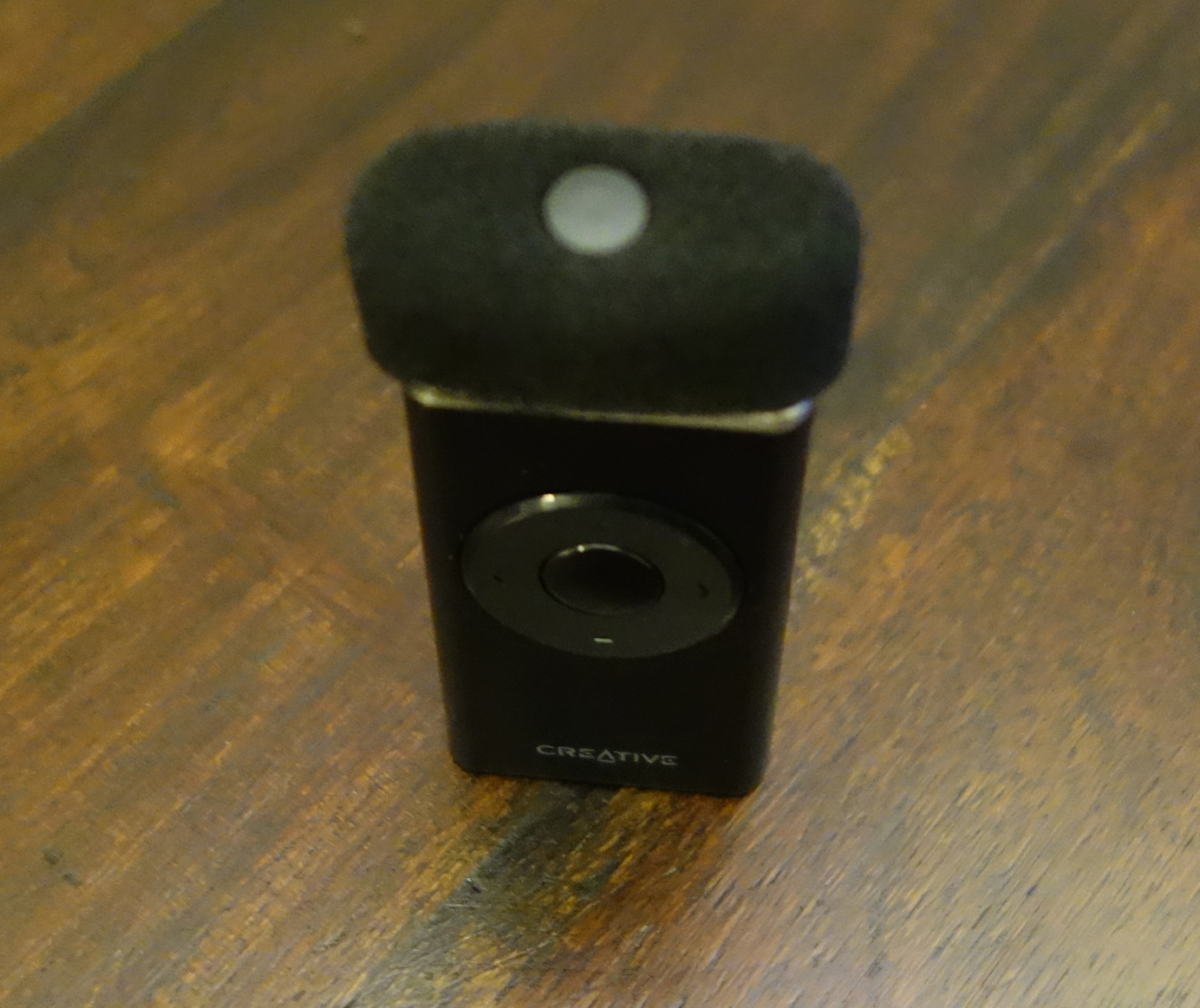 But in the right home-like environment, it works like a charm and is easy enough for anyone who can handle simple Bluetooth pairing to set up and use. The included windscreen is essential for me. It connects via a magnet, which isn't my favorite, but gets the job done. Along with being able to dial in the right sensitivity just by clicking the face buttons, the wireless audio pick-up is really incredible. With no morph set and the RapidTalk feature set to Speech, the latency is negligible, which makes the mic a pleasure to use.

That incredible low-latency brings me to the second practical use of the iRoar mic, karaoke.

Coupled with the iRoar speaker and a hardline audio source, the little iRoar Mic becomes a karaoke powerhouse. Ok, that may be an overstatement, but by taking my phone (a LG G4) and connecting directly by cable to either the iRoar Bluetooth speaker or to the 3.5mm line-in jack on the bottom of the iRoar mic, a surprisingly robust karaoke set-up is achieved. 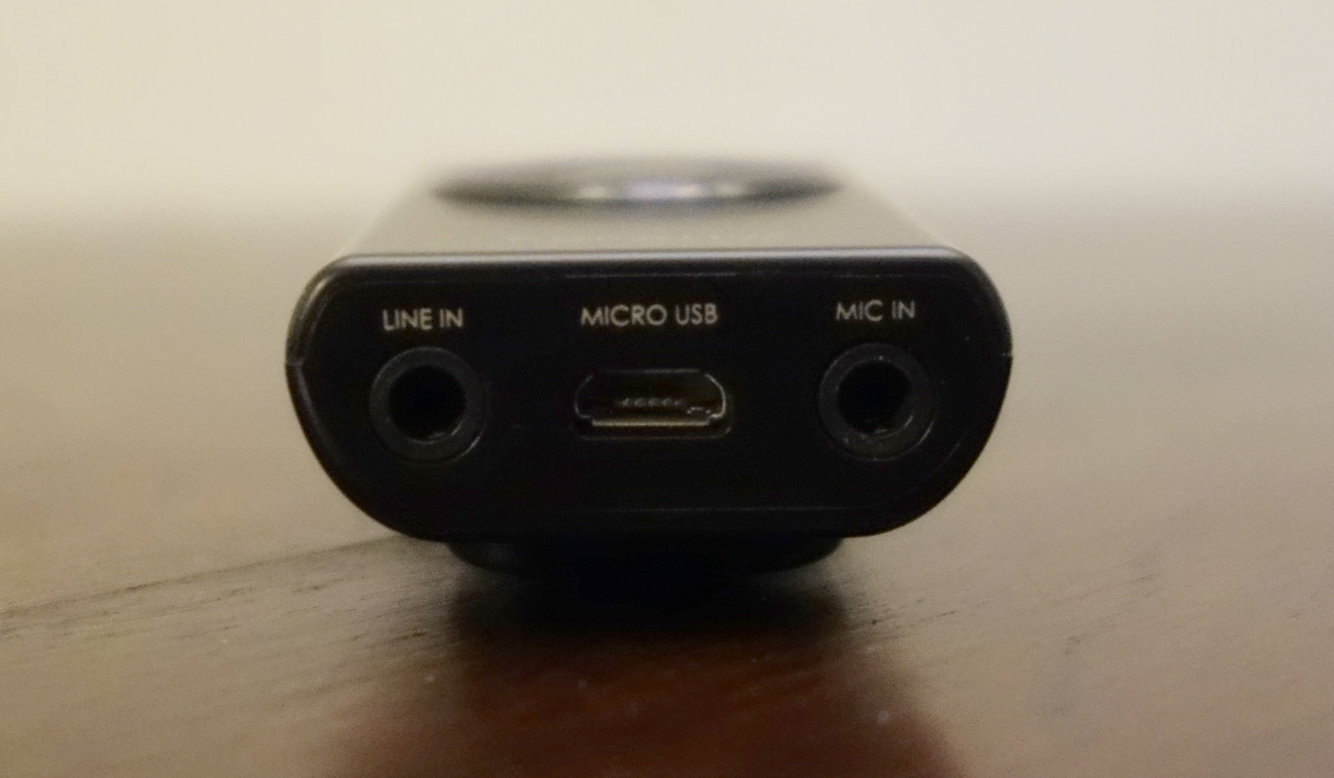 I really didn't need to go all that far to get some content. Simply by loading up the Amazon Music app and enabling X-Ray, the lyrics come up in a reasonably karaoke friendly way. Although there is a special Singing setting in the RapidTalk part of the iRoar Megaphone app, I found the Speech setting to be vastly superior. Once I had that no-lag feel, I didn't want to lose it.

The iRoar Mic works decently enough for karaoke, but the uneven highs and lows of singing are not the iRoar Mic's strength. An external mic then ought to be better suited. I tried various different mics I had around with various degrees of success. Finding the right inexpensive mic to work with the iRoar Mic is something of a rabbit hole, but the results are nevertheless impressive and party-friendly. (I've settled on a Sony ECMCS3 Lavalier/Clip mic as a practical but fun choice.)

If using the iRoar Mic with the iRoar is useful and fun, using the mic with the X7 really brings out its performance potential. That of course speaks to the X7's capabilities as well as the potential for using the accessory with multiple Creative products. 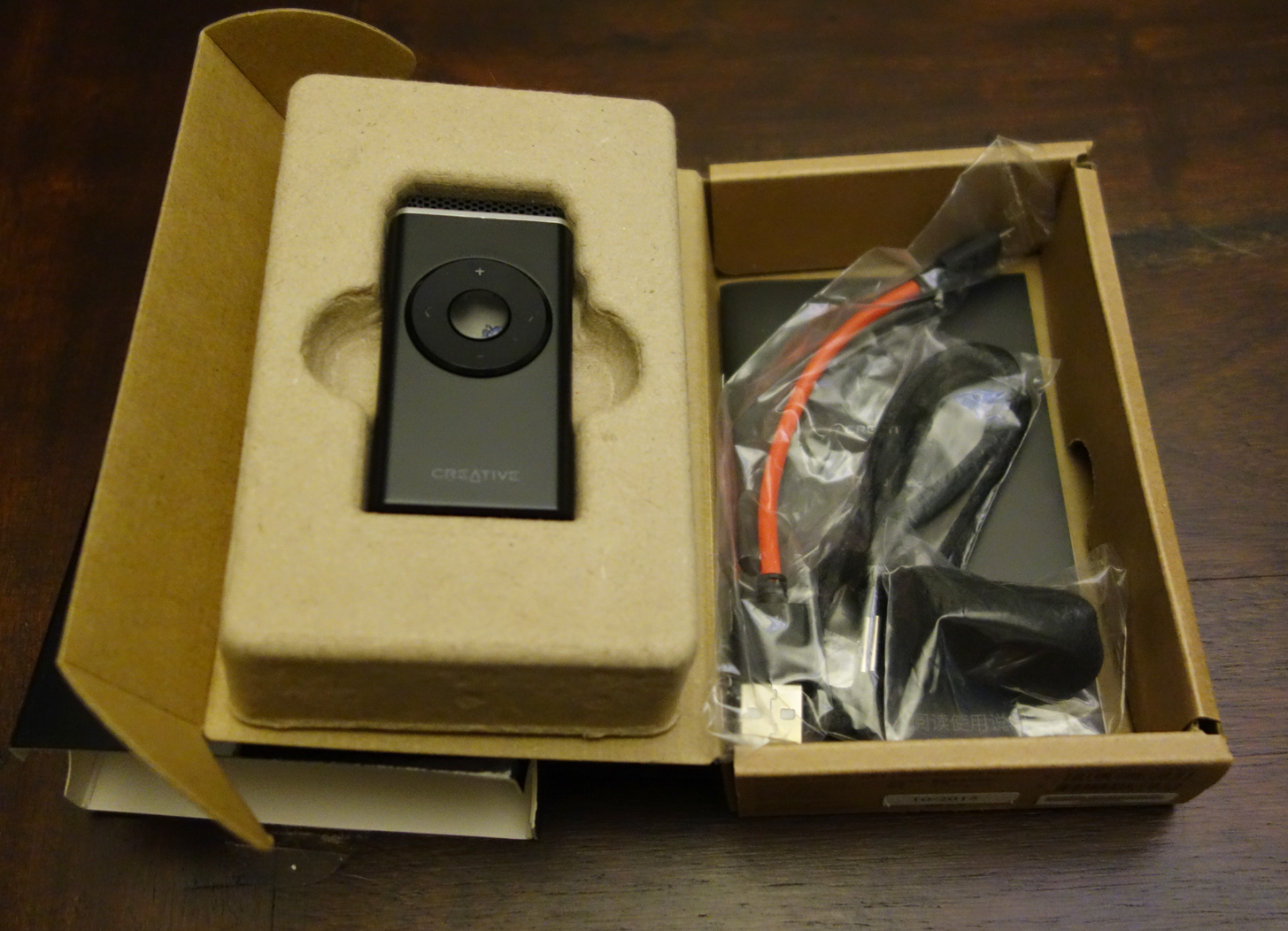 The iRoar Mic -- especially when used with the Creative iRoar Bluetooth Speaker -- helps to make a very slick and easy to use PA system. The karaoke abilities are even more impressive, but not as simple. For this price, buyers will want to have a good reason to pick it up, but for the right jobs, it's a little marvel.

In addition to the iRoar Mic review, we have also reviewed the iRoar Bluetooth speaker. Check out that review here.