Headphones come in all shapes and sizes, but at the end of the day models can usually be classified into one of two camps: Those that are designed to rest on/over your ears, and those that are designed to fit snugly inside your ears. While lesser models in the latter category have occasionally received a bad reputation when it comes to comfort and overall audio quality, in-ear headphones don't all have to sound like those cheap earbuds that came with your smartphone… and then promptly ended up in your garbage. Likewise, they don't all have to feel like you've just stuck an alien probe inside your ear canal.

Yes, that's right, in-ear headphones can actually sound good! Or in the case of Audiofly's AF140, they can actually sound really good. Designed for personal listening and to serve as on-stage monitors for musicians, these headphones aim to combine high quality sound with portability and a secure and comfortable fit.

It should be noted, however, that for the purposes of this review I evaluated the AF140 purely as a personal entertainment headphone and not as an on-stage monitor. Sadly, I'm just not very musically inclined. In fact, the closest I've ever come to a musical performance on stage was when I had to sing during my Bar Mitzvah… in front of all my friends and family… in Hebrew… as my voice repeatedly cracked. Hmm, come to think of it, I probably could have used a good in-ear monitor…

The AF140 is an in-ear style headphone with tips that are inserted into a user's ear canal, a moldable hook shell that wraps around the ear, and a pretty standard black and grey aesthetic. Under the hood, the headphones feature a hybrid triple driver configuration that includes one dynamic and two balanced armatures, with a crossover in each ear for seamless collaboration. Frequency range is rated for 20Hz-22kHz, sensitivity is rated for 118dB at 1 kHz, and impedance is listed at 38 Ohms. 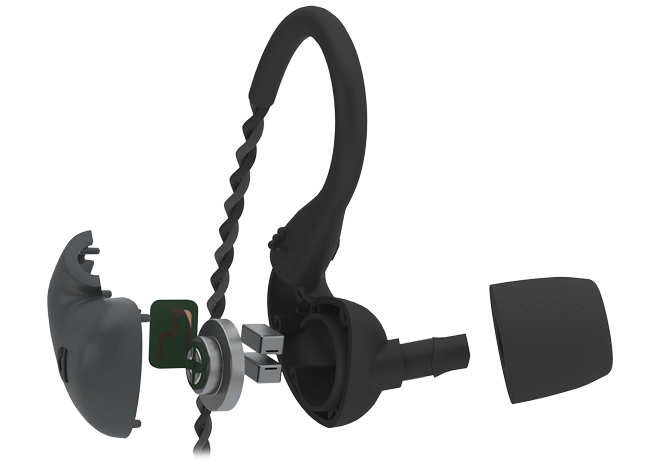 A low profile 1.6m / 64" Audioflex SL Cable with a 3.5mm gold plated, right-angle format plug extends from the headphones to connect to various audio devices. The sturdy wire uses a super light twisted cable near the top and tough CORDURA fabric for the rest of its length, giving it a relatively thick, durable feel. A simple plastic slider can be used to adjust the tightness of the strap and the cable is designed to rest behind a user's head.

Overall, the AF140 offers a functional and attractive design geared toward on-stage musicians that is neither especially unique nor boring. But really, when it comes to headphones, looks are pretty inconsequential compared to how they sound. And in that department, these earphones definitely start to standout.

With the headphones snugly placed within my eager ears, I sampled a variety of music tracks from different genres and styles. For testing purposes, I primarily listened to a mixture of MP3 files and Hi-Fi streaming through TIDAL on my Windows 10 Desktop PC and Samsung Galaxy S4 smartphone. To put it simply, the AF140 did not disappoint. In fact, it far exceeded my expectations.

Upon first impression, the in-ear monitors had a faintly dull quality that sounded a tad heavy on the low-end. Thankfully, after some moderate break-in time (Audiofly recommends about 40 hours but improvements were apparent after less time) the headphones really came alive. In general, the AF140's offer a pleasingly warm and expansive audio profile that provides a beautifully rich mid-range and some surprisingly deep bass. 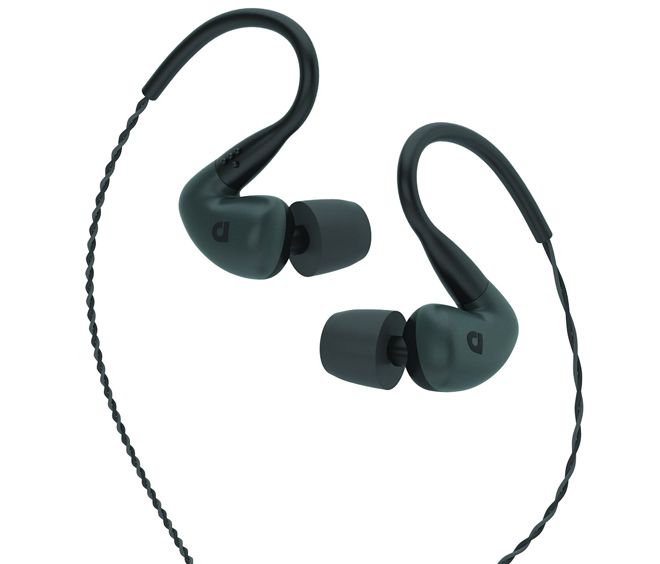 As I went through my usual array of test tracks -- including a wide-range of songs from different artists like Arcade Fire, Radiohead, Gnarls Barkley, Nicki Minaj, Norah Jones, Fleet Foxes, Otis Redding, Pink Floyd, David Bowie, Kanye West, The Clash, and Miles Davis -- the headphones provided versatile performance that fit well with every genre and temperament. The extended instrumental riffs during "Shine On You Crazy Diamond" were distinct and the various instruments featured a layered presence that never sounded murky or crowded together. Meanwhile, more bass heavy cues like those found in Gnarls Barkley's "Crazy," carried a clean and thumping beat -- completely eschewing the tiny, flat quality present in inferior earphones.

I don't know why, but Norah Jones' "Don't Know Why" has become one of my go-to tracks for testing vocals, and the singer's sultry voice was warm, full, and spacious. In addition, more aggressively produced tracks like Ariana Grande's "Focus" (which has now burrowed deep into my brain) maintained clarity, range, and, uh, focus throughout, showing off the AF140's enveloping and eclectic sound reproduction. 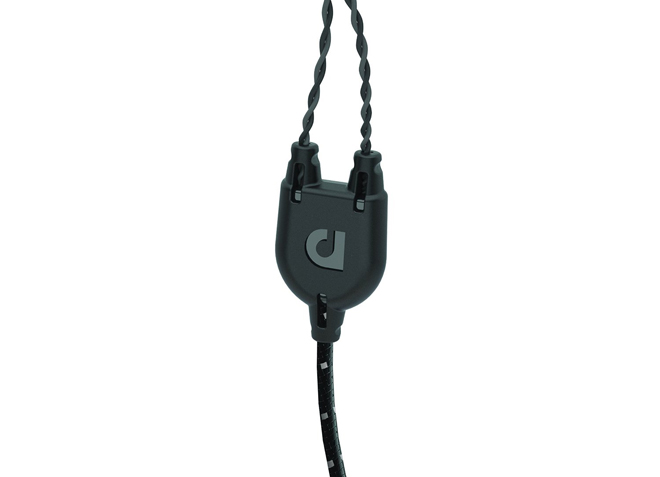 And though not specifically designed with movie performance in mind, I also tested the AF140 with some streaming clips and Blu-ray discs. Overall, the headphones offered full speech, clean LFE, and strong separation with all of the material I watched -- including scenes form 'X-Men: Days of Future Past' and 'Dawn of the Planet of the Apes.' The latter was especially impressive, revealing the AF140's penchant for handling subtle effects (like gently falling rain and quiet breaths) and escalating action effects without losing any nuance or kick.

I even demoed some DTS Headphone:X clips (which allow for 11.1 immersive audio with height channels) and the effect worked perfectly. With that said, though strong for in-ear monitors, the headphone's bass presence in movies was tame compared to the kind of jolt one gets from a genuine surround system and dedicated subwoofer -- but that's to be expected of course.

With their solid movie performance and exceptional music performance, the AF140 really impressed me -- completely changing my tune when it comes to in-ear headphones. Really, the only potential downside to the model's audio involves its high frequency performance. In general, even after the recommended break-in time, the AF140 tended to favor the mid/lower mid-range. Treble was still clear and free from any signs of shrillness or brittleness, but the highs weren't as pronounced and gradual as they are in some other premium headphone models.

Likewise, there were some instances when the low-end slightly overpowered vocals in a few tracks, but this was rare. Though the AF140's warmer quality took some getting used to at first, I actually came away really liking this particular sonic profile. While some audiophile listeners might prefer a more technically accurate sound, I really can't praise the smooth richness and pleasing depth of these headphones enough.

In addition to its premium audio quality, the AF140 also step things up a notch when it comes to included accessories and user comfort. The package comes with three different types of noise-isolating ear-tips (Silicon Dome, Silicon Tri-flange, and COMPLY Premium Earphone Tips) with three sizes each, offering a total of 9 options. For testing purposes, I tried out each of the different types but ended up preferring the default medium COMPLY Premium Earphone Tips. 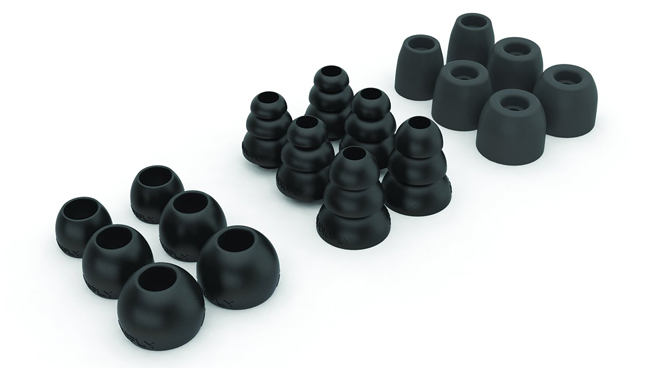 To be honest, I'm usually not a fan of in-ear headphones because they often feel extremely uncomfortable. While not a complete revelation, these comfort-friendly tips really do feel a lot better than many other models. Likewise, the in-ear design does allow for some solid noise-isolation, blocking out a good amount of unwanted sound. In fact, there were times when listening to music that I almost started to forget that the ear-tips were in my ears. Almost. Still, when it comes to in-ear monitor comfort it's hard to beat the AF140, and the fact that Audiofly has included such a variety of choices for its customers is a huge plus.

Designed to conform to a user's ear, the moldable over-ear shell is also relatively comfortable. With that said, it never really molded fully to my particular ear-shape (I must be a freak!). Likewise, the way the Audioflex SL Cable is designed to drape behind a listener's head could prove either beneficial or troublesome depending on personal preference. For on-stage use, this molded back design makes a lot of sense and offers a secure fit. For casual listening use, however, it can be a little annoying as the entire process of putting the headphones in, securing the moldable portion, and then taking them out isn't as plug-and-play friendly as it could be. Similarly, though premium in-ear monitors like this aren't exactly geared toward use during exercise, this kind of cable placement definitely isn't ideal for use on workout machines -- though it's pretty good for jogging. 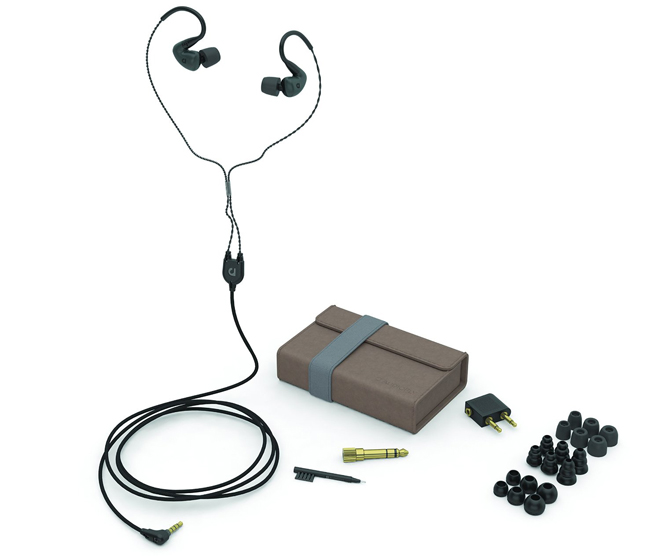 Beyond the ear-tips and comfort, the headphones also include an airline adaptor, 1/4inch (6.35mm) TRS Jack adaptor, and a handy cleaning tool. Likewise, the package even comes with an attractive canvas wallet case for storing your headphones and accessories. While this is a nice inclusion and is great for carrying the headphones themselves, there really isn't a whole lot of space in the wallet for any additional tips or adaptors, limiting its usefulness.

Marked by impressive depth, the Audiofly AF140 in-ear headphones offer a pleasingly rich and warm sound that suits just about every style of music. Though treble isn't quite as distinct or accurate as some audiophiles might like, I ended up quite taken by this particular sonic profile. Add in a wide selection of ear-tip options that are designed with comfort in mind, and these bad boys really do cement themselves as genuine premium in-ear monitors.

While the price tag is pretty steep, the audio and build quality here do mostly justify the higher cost. With that said, the design of these headphones is definitely geared more toward on-stage musicians. In other words, though great sounding and pretty comfy in your ear, the headphone's moldable cable isn't as casual listening friendly as your average pair of plug-and-play ear-buds. But they sure do sound better! Despite any minor issues, with its warm and lush audio quality, the AF140 was always a joy to listen to. Music lovers looking for a higher-end in-ear headphone option should definitely seek these out. Highly recommended.