When it comes to space-saving and budget conscious home theater gear, traditional soundbars can be great alternatives to the tiny, shrill audio usually associated with integrated TV speakers. But as accommodating as soundbars are, they still have certain limitations (particularly when it comes to bass) and are not always suited for every user's specific setup. So, with that in mind, manufacturers have developed another speaker option that promises to offer room-filling audio without breaking the bank or taking up your entire living room.

Designed to sit directly under a customer's display, soundstands and soundbases aim to deliver enveloping sound with built-in subwoofers while still maintaining a compact design. But wait, there's more! In addition to offering room-filling audio, a soundbase can also double as a handy pedestal stand for your TV, raising your display up to achieve the royal treatment that it deserves.

This leads us to the ZVOX SoundBase 670, one of the company's top tier SoundBase models. With three virtual surround modes, optical audio support, and even a dialogue enhancing feature, the speaker is geared toward providing a robust alternative to wimpy integrated TV audio -- one that will never leave you desperately leaning in to try and make out that last gravelly, whispered line of dialogue on 'The Walking Dead' ever again!

Measuring 36 "W x 16 1/2"D x 3 1/2 "H and weighing in at 26 pounds, the SoundBase 670 is designed to work with most TVs up to 75-inches in size and up to 120 pounds. Though not exactly small or lightweight for an average soundbase or soundbar, the unit's support for larger size displays is handy and it still fit nicely directly under my Panasonic 50-inch plasma allowing it to be positioned without taking up too much real estate. The sturdy black MDF (medium density fiberboard) wood cabinet offers a minimalist rectangular design. It's no-frills, but it gets the job done just fine. Underneath the hood, the speaker is powered by a 105 watt Class D digital amplifier and features five 2"x 3" main speaker drivers and three 5.25" subwoofers that use a high-mass long-throw design in a ported enclosure.

On the front of the device is a panel with buttons for mute/power, volume, and input selection, along with a standard stereo miniplug jack. An LED is also housed toward the top right of the speaker behind the grill, displaying volume and input information in orange text. Moving to the back of the device, customers will find the unit's main connections, including two digital optical inputs, one digital coaxial input, two left/right analog inputs, a sub output, and a stereo signal output -- providing several simple plug-and-play options. For its digital inputs, the device features built-in Dolby Digital decoding (though in my testing, DTS material also played just fine). 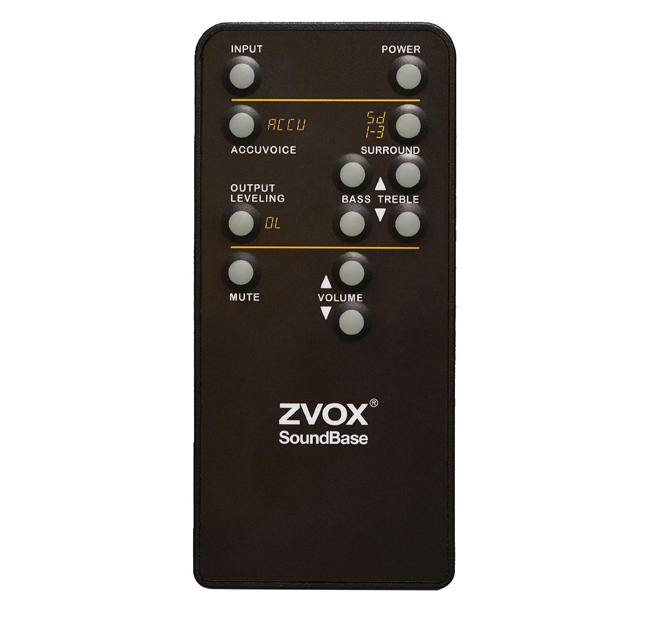 A simple, compact infrared remote control is included as well. The remote features buttons for input, power, volume, mute, bass, and treble, along with options to cycle through the SoundBase's three surround sound modes, its Accuvoice feature, and its Output Leveling feature. In addition, users can also configure the SoundBase to work with most existing TV and cable/satellite remotes, offering control for volume, mute, and power.

For testing purposes, this review was conducted using the SoundBase connected to a Sony PS4 and Panasonic Plasma HDTV through digital optical connections. Meanwhile, Bluetooth testing was conducted with a Samsung Galaxy S4 smartphone.

To get a feel for the SoundBase 670's audio performance I tested out a variety of movies, TV shows, and music, switching between Blu-rays, streaming content, MP3s, and internet radio. Though there are some caveats and inconsistencies here and there, overall the SoundBase performed quite well, fully living up to its promise as a room-filling audio solution.

First, let's start with the good -- and thankfully, there's plenty to talk about here. In general, while using the Sd 3 setting for movies and TV, the SoundBase 670 provided an enveloping and full-bodied presence with clean vocals and a surprisingly deep low-end. Fidelity, range, and separation can't compete with a dedicated surround sound setup, mind you, but for a single cabinet speaker system in this price range, the audio quality is strong.

This is especially true for mid-range heavy material and dialogue-centric programming. To this end, I used this review as the perfect excuse to binge watch new Netflix shows like 'Jessica Jones' and 'Master of None,' and both series sounded great through the SoundBase. 'Master of None' features very low-key sound design, but the dialogue-heavy presentation always came through with a clear and spacious quality. 'Jessica Jones,' on the other hand, is a bit livelier, and the SoundBase was more than up for the increased activity. City ambiance was spread wide throughout the room, and though the virtual surround processing never actually gave me a sense that sound was coming from behind, the audio was dispersed nicely. Stereo separation and imaging were also solid, but not as distinct as one might find on a wider soundbar model. Likewise, more intense effects like gunshots and certain bass cues came through well with strong LFE. And thankfully, dialogue still remained clear and easy to understand -- even on the Sd 3 setting.

Moving away from streaming material and on to Blu-ray demos, the SoundBase 670 continued to perform well, but did start to reveal certain limitations and quirks -- most notably when it came to low frequencies… but not in the way that you might think. While most soundbars and single unit speaker systems have trouble offering floor-shaking bass, the 670's integrated woofers actually pack some pretty powerful rumble. Unfortunately, this aggressive low-end can get rather boomy with certain material.

This was particularly noticeable when playing the opening action sequence from 'X-Men: Days of Future Past.' As the future sentinels approach the X-Men, the track plays a series of relatively deep bass cues, and these effects come across as overpowered, slightly drowning out the rest of the mix. Other sample scenes, including sequences from 'The Lego Movie' and 'Game of Thrones' sounded a bit more balanced through the SoundBase, but overall bass activity in action heavy content still leaned toward the muddy side. 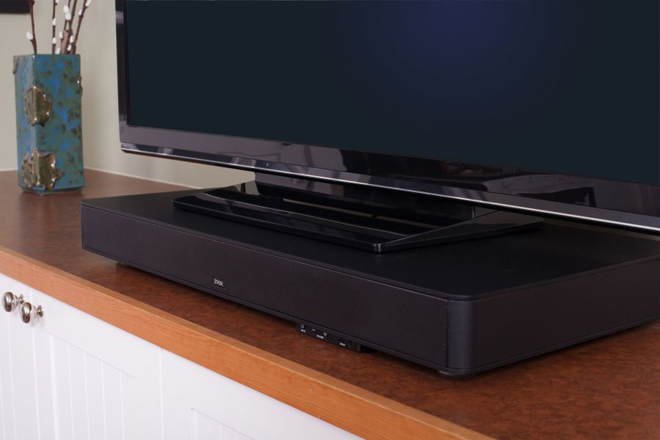 When it comes to music, the speaker was similarly solid in its performance. Playing MP3 tracks off a flash drive connected to my PS4 yielded mostly positive results, with the SoundBase handling a variety of musical styles fairly well. Tracks from Arcade Fire, Radiohead, Norah Jones, Pink Floyd, Daft Punk, Gnarls Barkley, and Fleet Foxes all came through with strong presence, pleasing separation, and thumping bass when appropriate. I also sampled some Blu-ray concert material, including 'Roger Waters The Wall,' which sounded very spacious and deep.

Still, there were some inconsistencies depending on the type of music being played. Gentler songs, like Norah Jones' "Don't Know Why," offered warm and distinct vocals, but busier tracks did have some issues with balance even on the Sd 2 setting (the Sd 3 setting often made vocals very hard to hear). To this end, I once again found the low-end to be a bit too punchy on certain material (Daft Punk's "Get Lucky" for instance) and the extreme highs also became a bit sharp (the instrumentals in Radiohead's "Life in a Glasshouse" were slightly harsh at high volumes).

Thankfully, whether playing music or movies, the unit does offer adjustments for bass and treble, and honing in the lows and highs to personal preference did yield better results with many films and songs. With that said, it was difficult to find a setting that fit well for all content making this a slightly temperamental speaker system for those with pickier audio tastes. And though it's unlikely that any user will ever need to max out the volume, it should be noted that the speaker does start to distort a tad as it approaches its highest output level.

Of course, a unit like this isn't designed to compete with true high-end audiophile systems, and given its emphasis on plug-and-play simplicity, the SoundBase 670 is quite well-rounded. Though the extreme lows could get boomy and the extreme highs could get harsh with some sources, the mid-range remained warm and full-bodied and the unit was always able to disperse room-filling sound with any material that I threw at it.

Have you ever watched an episode of your favorite show only to find yourself completely unable to hear whatever the hell the main character is saying? (I'm looking at you Rick Grimes!) Well, you're not alone, and thankfully ZVOX feels your pain. So much so, that they've actually decided to do something about it!

With the SoundBase 670's Accuvoice feature, users can toggle on a handy dialogue emphasizing mode (when activated the speaker overrides the previously selected Surround setting). In practice, this feature works exactly as advertised, bringing vocals to the forefront of the track. On the upside, this makes hearing even the most grizzled dialogue a breeze. On the downside, however, this increase in vocal clarity does come at the expense of overall audio quality, leading to a noticeably tiny and flat soundstage that loses the full-bodied and expansive quality found in the Sd 2 and Sd 3 settings. Since this mode is primarily designed for users with hearing loss in mind (and is not intended for home theater enthusiasts), this will likely be an acceptable tradeoff for those who need it (I know my Dad would really love an option like this). 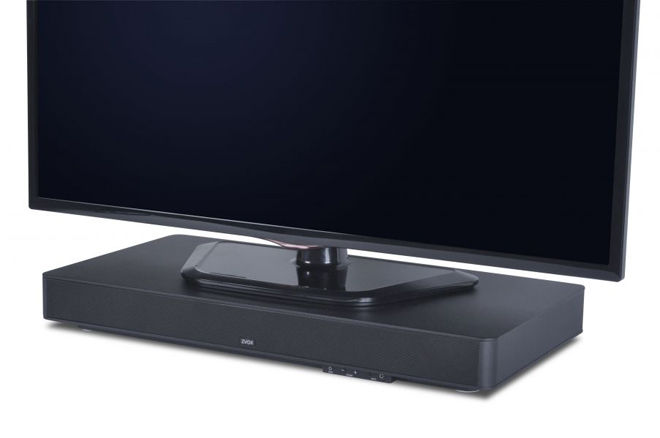 In addition to Accuvoice, the speaker also has an Output Leveling mode that boosts quiet dialogue and lowers loud commercial breaks and volume swings. In practice, this seems to work like most dynamic range control settings, reducing annoying swells in volume but flattening overall range at the same time. While some users might find this mode helpful when channel surfing or watching programs late at night, I preferred to leave it off.

Finally, to complement its wired connections, the SoundBase includes aptX Bluetooth connectivity for wireless music streaming as well. After changing the input on the SoundBase to Bluetooth, I was able to quickly locate the speaker on my Samsung Galaxy S4. From there, all one needs to do is pair the two together and, voila, you've got yourself some no-fuss wireless music. For demo purposes, I played some MP3s off of my phone and loaded up the Spotify app to listen to internet radio. Both sources provided stutter-free Bluetooth playback and I was able to move about 20 feet away from the speaker before I started to encounter connectivity dropouts.

With solid audio performance, plenty of connection options (sans HDMI), virtual surround sound processing, Bluetooth, integrated woofers, and a helpful dialogue enhancement feature, the ZVOX SoundBase 670 is a well-rounded plug-and-play audio solution. For customers who are tired of shrill integrated TV speakers but who don't have the room or budget for a full surround sound system, this unit is definitely a tempting option.

Despite some issues in the extreme lows and highs, the SoundBase works great with mid-range material. Likewise, the unit packs some surprising punch, but the floor-shaking bass does come at the expense of a more balanced audio profile and the lack of a true stereo mode is disappointing. Of course, there are trade-offs that come with any speaker system in this price range, and the 670 has good overall performance and reasonable value for its class and TV size support. Though the device has some quirks, its mixture of simplicity and quality is well suited for casual home theater customers and the Accuvoice feature is a great inclusion for users with hearing loss. Recommended.