No arsenal of audio gear is complete without a go-to option for mobile audio. Bluetooth designs have come a long a way, but going wireless while navigating the myriad mess of lifestyle headphone offerings is a daunting task for anyone. With the Hinge Wireless, Polk is looking to navigate a tight rope. 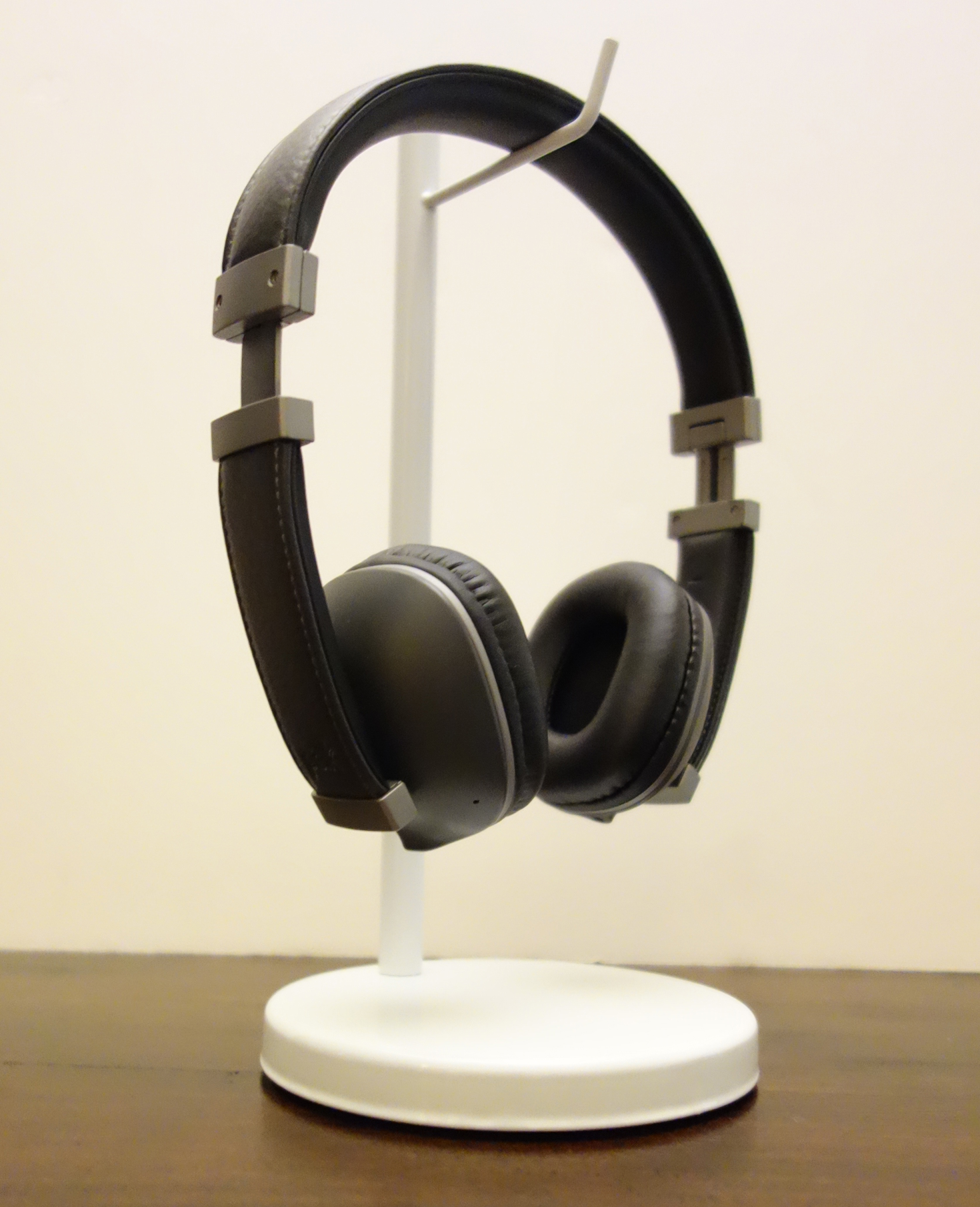 Lifestyles vary person to person, but for me, a Bluetooth headset is a must. Take any trade show event that I have to travel for, and between car rides, plane rides, train rides, hotels and a steady stream of checking in and waiting around, and I absolutely need headphones. These headphones need to sound good and be comfortable, and again, for me, comfort means going wireless. Naturally, battery life and wireless strength are important, and being able to make clear calls is hardly a forgettable aspect. Having said all of this, one key area where many good headsets fail is being able to disappear once my meeting or event, etc. starts.

Such a need brings me to the Polk Hinge Wireless. As its name indicates, it offers both wireless via Bluetooth connectivity and has hinges that let it collapse into a size small enough for a big pocket. I've found that I can wear it on my neck comfortably as well, but it's that quick two hinge action that makes it very portable. The footprint when broken down is still pretty big and certainly not suitable for jean pockets. But when collapsed, the metal and pleather wrapped Hinge Wireless gives a sense that it can handle being shoved in a messenger bag or car door pocket in the exact way that a fixed headset lacks. 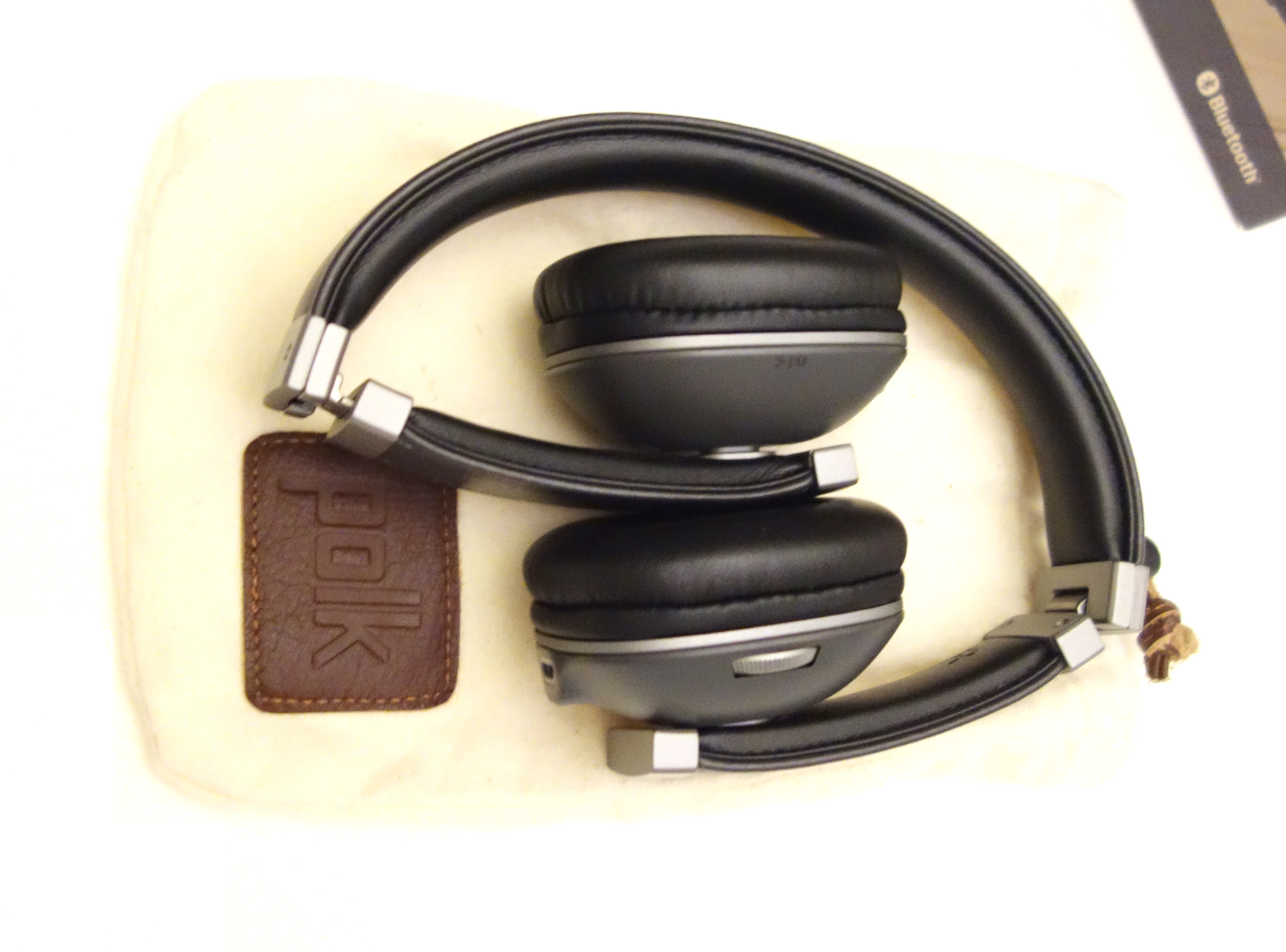 There is a price to pay for this convenience, and I don't mean in dollars. The Hinge Wireless is an on-ear design, and one that forms a pocket on each ear to achieve a nice level of passive noise cancellation. The rub is that on-ear is never as comfortable as over-the-ear. The Hinge Wireless has a swivel point where the ear cup attaches to the headband, and thus gives the model the ability to conform to the ears. With the padded headband, it's a commendable design, but it's also a design that leaves the ear cups with the task of holding onto the wearer's head.

Even with a built-in battery, the Hinge Wireless checks in at a light 7.8 ounces. It's unlikely to ever feel heavy, except when it starts to slide off. And that will happen if the wearer begins doing something more strenuous than walking. Sitting is fine, as is walking around an airport. Moving boxes with the Hinge Wireless will not only see the headset try to eventually fall off due to all the bending and moving, but will also see some serious heat build-up in the wearer's ears.

So in terms of comfort, the Hinge Wireless is nicely above average for on-ear, but if the wearer starts acting like a roadie, moving and carrying bulky things, the comfort level and wearability/usability drops considerably. 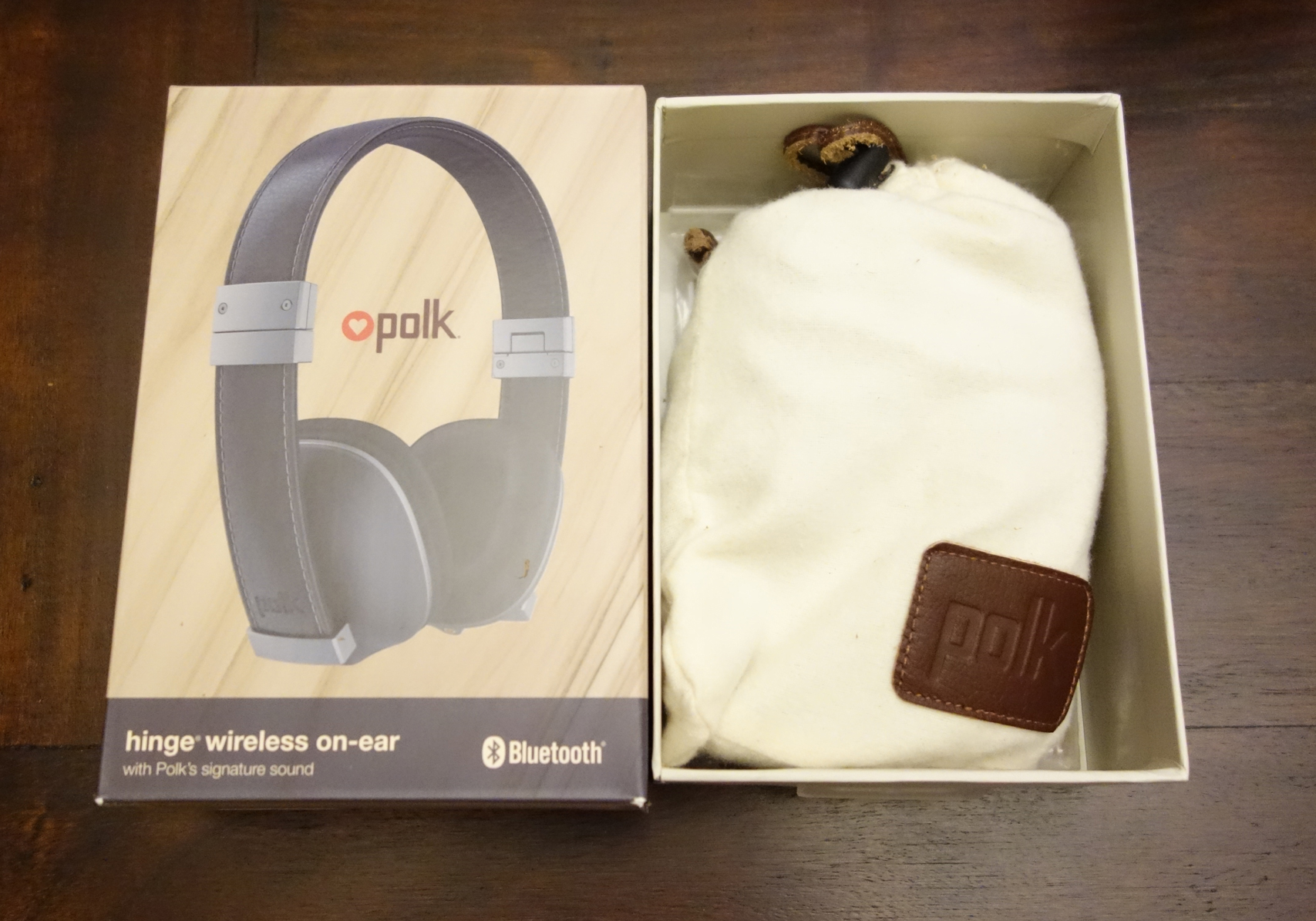 Of course, the comfort level would be moot if the audio performance was subpar. I consider Polk to be great at passive driver design, but a package like the Hinge Wireless requires more than good drivers. Happily, I can say that the Hinge Wireless sounds great. There is warmth and clearness that lets the mids and highs breath, but there's something interesting going on with the lows. The Hinge Wireless, when properly motivated, can become very punchy with the bass. When listening to the beginning of Pink Floyd's "Wish You Were Here," the beginning moves brilliant in its steps. The pseudo radio starts in the right ear before being joined by the guitar proper, building the song by degrees. By the time the bass drum comes in at two minutes, the thud is somewhat shocking. Likewise, the beginning of Seether's "The Gift" or even M.I.A.'s "Paper Planes" will soothe the listener into a false sense of range, but when the drums start, it's like the Hinge Wireless finds an extra gear with which to deliver bass.

I suspect that the driver design works exactly like that, bringing in an extra oomph when it's called for. With something less punchy and more steady, like Mumford & Sons "I Will Wait," it's a very warm sound. I think it's enjoyable, but I can understand that anyone who is looking for monitor clarity might object strongly. Whatever it is that Polk has done to these drivers to get that extra bass action doesn't affect everything the way that bass heavy headsets normally do, so it's not an all-crushing amount of bass.

I frequently can be found listening to audio books during my travels, and the Hinge Wireless treats the narration of something like George R. R. Martin's 'Wild Cards' with an even deference, which I appreciate. When firing up 'Fallout 4' on a laptop or 'Fallout Shelter' & the 'Pip-Boy' app on a smartphone, the deep sound continues to be impressive even while light sound effects come through without a misstep. 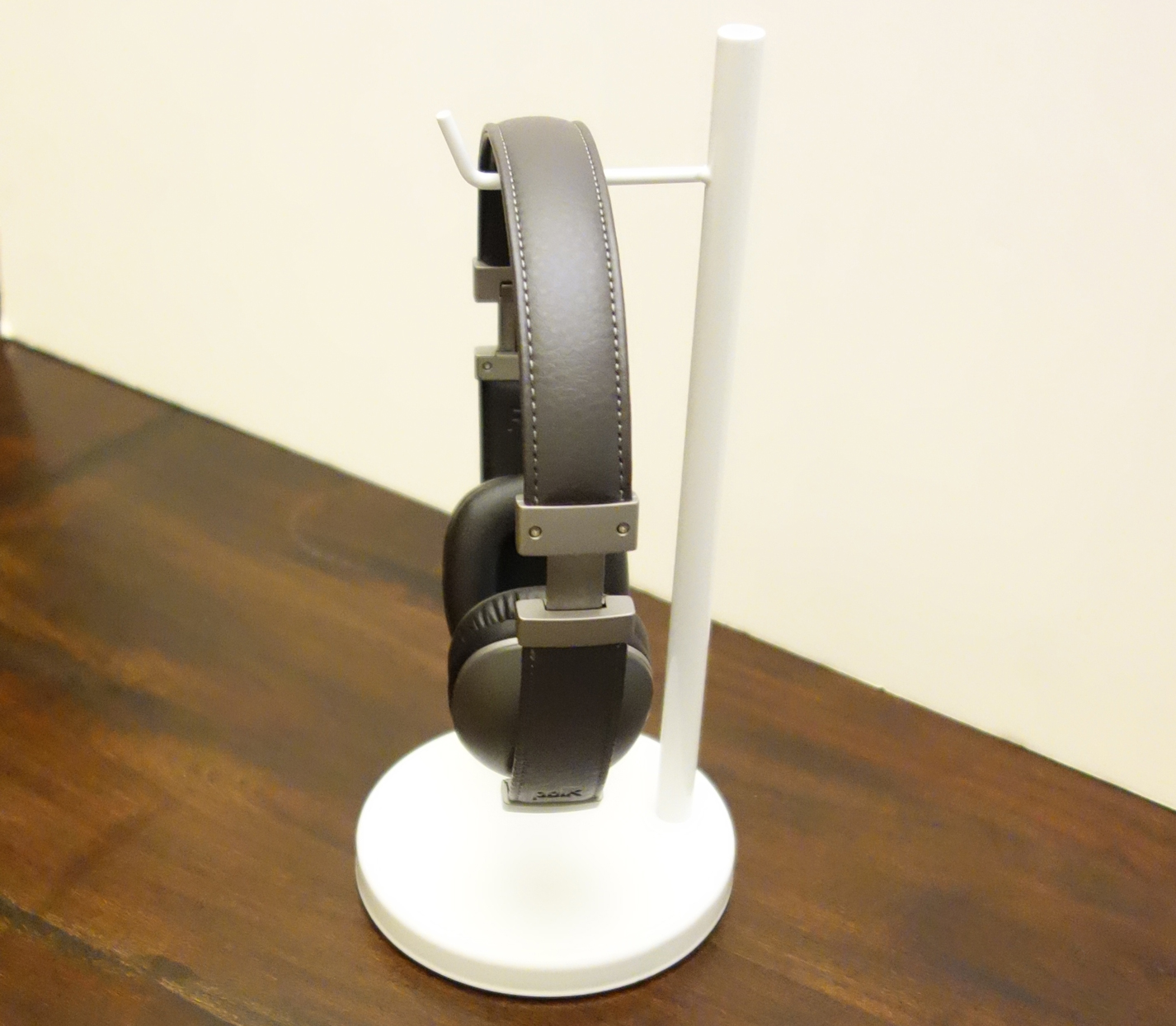 The Hinge Wireless is rated to have 12 hours of battery life and a 30 feet Bluetooth range, but I think the battery life is much better than that. The range is much more dependent on the transmitter side, but being in the same room or within 20 feet is best in general. The single LED under the right ear cup has been styled to wrap around the micro USB port, and manages to look nice while being completely out of the way. The LED is solid white during normal operation, but I rarely ever had to look at it. The NFC pairing function works great, but the normal pairing option works fine as well.

A warm ding signals when powering the headset on and off. The lone button on the right ear can power the headset on and off and is also a wheel style rocker for controlling the volume. The volume control could be better. As with most Bluetooth audio devices, the headset sometimes controls the device's volume directly (iPhone) or indirectly (LG G4). The single button can be used to play music, answer calls, and both advance and rewind to different tracks. This last bit is a bit tricky, and another two buttons would have worked better.

This being a quality headset, both aptX and AAC codecs are supported. Anyone who has stayed away from the tech for a few years and hasn't used this kind of Bluetooth audio transmission really ought to give it a shot. 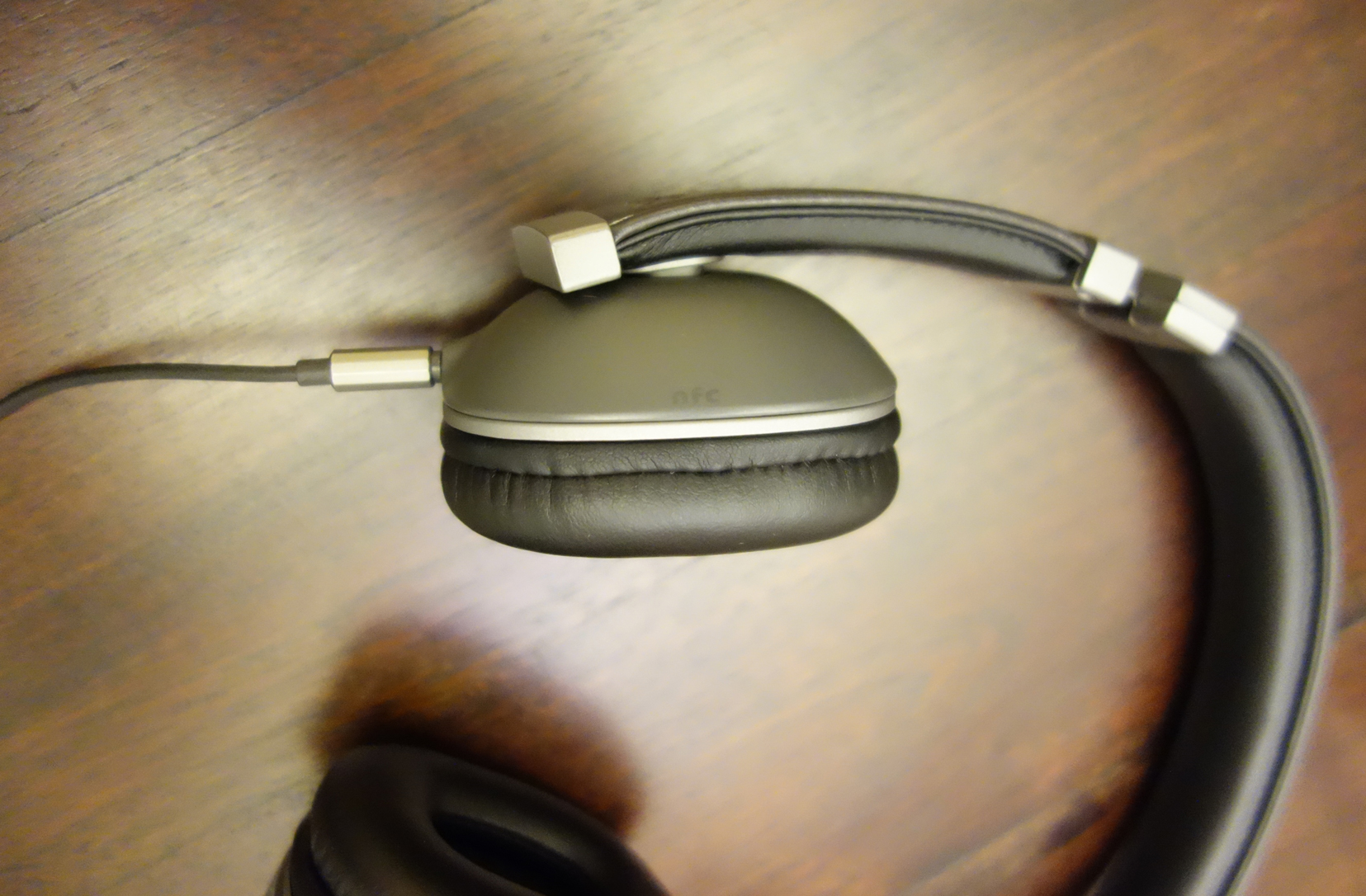 The Hinge Wireless can be used without Bluetooth via an included detachable cable. When on the go, I use Bluetooth roughly 100% of the time regardless of my surroundings, and I expected that this cabled ability was a kind of throwaway mode. That's not the case. Although using the Hinge Wireless with the cable is a passive affair, (the headset ought to be turned off), the sound quality is excellent. For any users that split their time between cabled and Bluetooth use, the Hinge Wireless will deliver on both fronts.

Sadly, although the detachable cable is stylish and includes an inline control and dangle mic, the connection on the Hinge side is the 2.5mm connection. Whatever the reason for this, it makes that detachable cable a key accessory not to be lost or otherwise ruined. On the source side of the cable, it's a right angle standard 3.5mm male plug. The three button control works fine enough. Two buttons are meant for volume with the center button used for answering calls and play/pause. This button also has the advance/rewind button sequence. 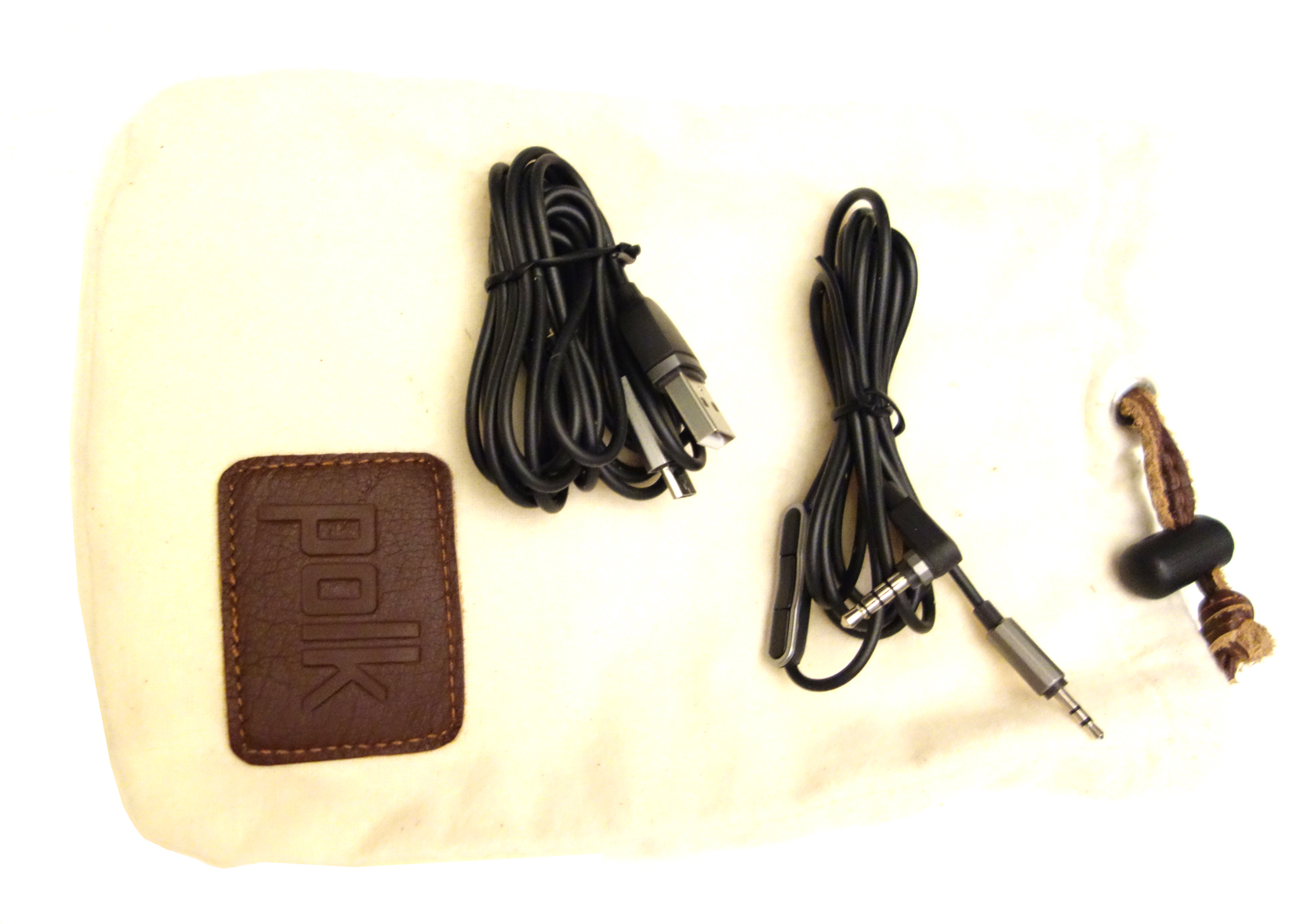 There are two mics on right ear cup, and they are used for both voice pickup and cutting down on outside noise during calls. Between the headset's passive noise cancellation and this mic set-up, call quality using Bluetooth is great. I made and received plenty of calls while being out and about, and never had a complaint.

The Hinge Wireless comes in three colors, but I was more than happy to receive the Black color variant for a review unit. The two other colors use brown and camel respectively to strike a statement that I don't need to strike.

The black variant I reviewed uses black and dark greys to great effect.

When handling the Hinge Wireless, there's no question it's a premium product. It's not just the leather look and feel. The all-metal hinge and mounts are finished well, balancing functionality and refinement while concealing the flat wire. The coolness of the metal and firmness of the fake leather ensure that when touching the headset, it feels worth the money. Only the plastic ear cup shells, which are where all of the electronics reside, threaten to let down the tactile standard.

Both the detachable cable and micro USB cable have dark grey accents where they meet the headset. In total, the headset looks great, and in this black color variant, the Hinge Wireless injects a safe amount of style into the realm of austere business types. Indeed, black (or dark grey) goes with everything.

It's a shame that the soft cream and brown carry bag lets down on this a bit, but taken on its own, the carry bag is fine. 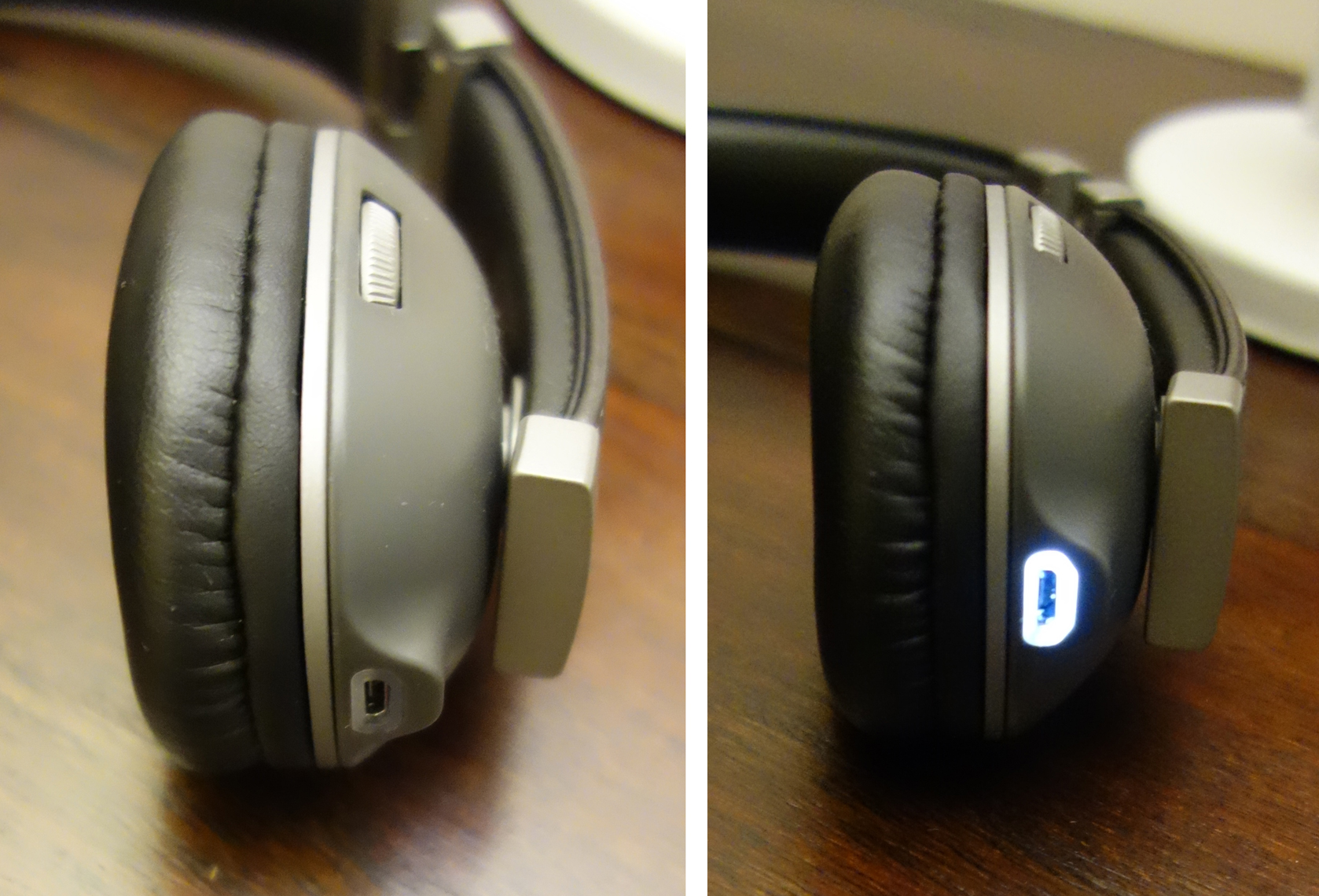 The headset comes with the matching detachable cable and micro USB cable, along with the mismatched carry bag. One might expect at this price to find active noise cancellation, but no, the Hinge Wireless relies on passive noise cancellation. The upside apart from better battery life and fewer electronic components is better overall audio quality.

The build quality on my review unit seems to be excellent, and I have been happy enough to regularly fold and unfold the headset and shove it in the nearest pocket without worrying that it would break. That doesn't mean I would toss it out of a moving car or leave it in an adjacent seat to be accidentally sat on. The headset comes with a 1 year parts and labor warranty, and I can only hope that it holds up to years of use as well as it has held up the past month. 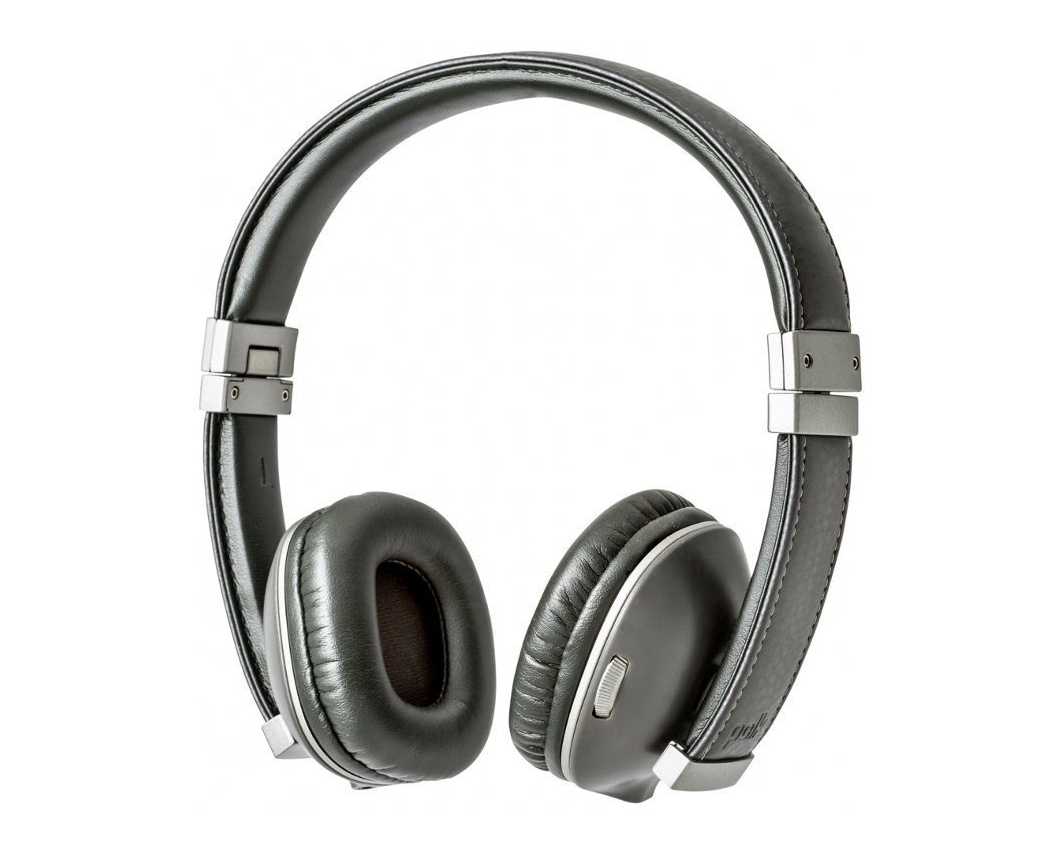 With the Hinge Wireless, Polk has produced an excellent and stylish collapsible on-ear Bluetooth headset. It does well with everything I could ask of it, but isn't great to wear when hauling groceries or camera equipment. Otherwise it's quite lifestyle and travel-ready, which is my concern. With both great wireless and wired performance, buyers could potentially use it for a great many other applications beyond mobile.