HD and Ultra HD TVs are known for delivering impressive visuals, and companies often place an appropriate emphasis on picture quality features in their sets -- but when it comes to audio… well, that's an entirely different story. Even the most expensive high-end displays often lack much in the way of quality when it comes to internal speakers, and some of the worst offenders can be damn near unlistenable.

Thin, tiny, boxy, muffled, and poorly positioned, integrated television audio is often more of an afterthought than a priority for many manufacturers. After all, most figure that if you're going to be spending thousands of dollars on a 1080p or 4K set, it's likely that you'll want to lay down at least a few hundred more on a solid audio system as well.

But not every large-screen TV owner has the space or cash for a full-fledged surround sound setup. Does this mean that these customers are simply doomed to suffer the horrors of internal TV speakers? Are they forever condemned to make do with muddy frequencies and wimpy bass? Well, not if Sharp has anything to say about it! The HT-SB602 2.1 Channel Soundbar aims to offer a space-saving alternative to a traditional stereo or surround sound system while providing a significant improvement over built-in TV speakers. And unlike most soundbars, this ultra-wide model is specifically geared toward big-screen TVs.

The Sharp HT-SB602 is a 310 watt 2.1 channel soundbar system with a wireless subwoofer. In addition to the speaker and woofer, the package comes complete with a remote control, a stand for the subwoofer, an HDMI cable, an analog audio cable, an IR transmitter, two wall mount angles, pattern paper, Velcro tape, and an NFC tag. 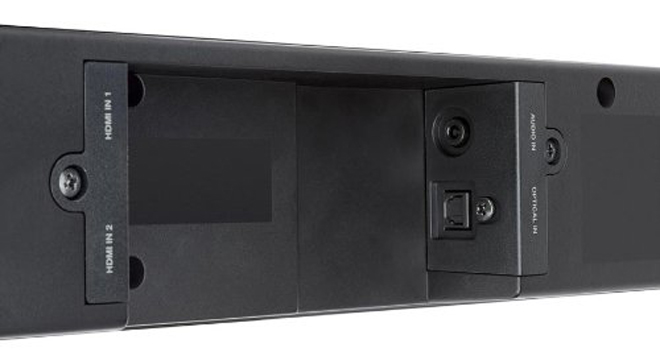 With its sleek, ultra-wide aesthetic, the speaker integrates well into any large-screen home theater setup and can be placed in front of or mounted above a TV. The soundbar is designed for use with 60-inch displays or larger, but the product paired decently with my smaller 50-inch Panasonic plasma. The front of the speaker features a standard LED display window with blue text, and buttons for power, volume, Bluetooth pairing, changing inputs, and changing sound modes. Meanwhile, the rear panel features all of the unit's connections, including an IR out, optical in, analog audio in, two HDMI ins, and one HDMI out with ARC capable of 1080p pass-through with 3D support.

Once everything is unpacked, setup is simple, quick, and painless. Users simply need to connect a power cable to the soundbar and subwoofer, and then plug the desired components (Blu-ray player, game console, TV, etc.) directly into the back of the soundbar with the appropriate audio cables (no A/V receiver is required).  Once all the cables are connected, customers just need to power on the soundbar and subwoofer. The two units automatically pair together wirelessly. Users can then switch to the desired input with the included remote control to start enjoying the system. 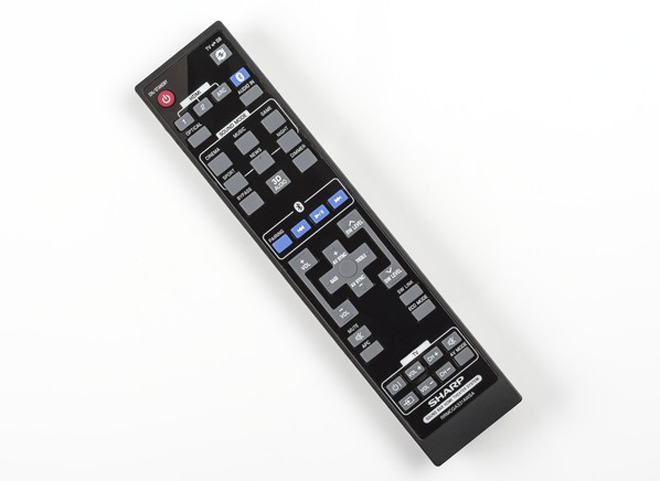 The remote features a pretty standard design allowing users to switch inputs, control volume, adjust the subwoofer level, change sound modes, and activate the 3D audio feature. Available sound modes include Cinema, Music, Game, Sport, News, and Night. For the most part, I found the first three presets to be well suited for their content types, but users can also fully adjust the treble and bass levels to their liking by selecting the Bypass mode and then hitting the treble and bass buttons. In addition, customers can also trigger two 3D audio modes which can produce multi-channel sound from a 2.1 channel source and "simulate sound transmission characteristics using digital signal processing to create a widening effect on sound in the ambient space around the sound source." In practice, I found this mode to be rather hit or miss. On some sources it definitely created a more spacious soundfield, but on others it added a slightly echoey and artificial quality that could be distracting. Music seemed to benefit the most, but overall, I preferred to leave this mode off.

For the purposes of this review, I did not use the included wall mounting brackets or IR Blaster (used if the soundbar causes interference between your TV and remote), and instead simply placed the soundbar in front of my TV. For all of my audio testing, I primarily used a Sony PS3 connected to the sound bar through one of the HDMI in connections, and the HDMI out going to my TV. The speaker offers native support for standard (not lossless) Dolby Digital and DTS sound decoding along with Bluetooth connectivity for playback from mobile devices and computers.

To test the HT-SB602 movie performance, I engaged the unit's Cinema Mode and turned to my usual assortment of Blu-ray demo materials, including aggressive titles like 'Saving Private Ryan,' 'The Avengers,' 'Game of Thrones,' and new addition 'Edge of Tomorrow.' From the get-go, I was immediately impressed. Instead of noticing any prevalent dullness, sharpness, or muddiness in the lows, highs, or mid-range, the speaker just sounded plain old good. No major caveats or qualifications needed. Well-rounded, nicely balanced, clear, and relatively precise, my first impression of the soundbar was very positive.

Thanks to its comparatively wide length, the speaker produced a surprisingly immersive soundfield, offering spacious stereo separation that spread effects work to the left and right with a strong sense of directionality. The beach invasions in 'Private Ryan' and 'Edge of Tomorrow' provided an aggressive assault, and the soundbar did a great job of highlighting each piercing bullet and explosion with a solid kick. To this end, the wireless subwoofer worked very well with the speaker, leading to a mostly cohesive mix of frequencies. Both also provided more than enough power for my apartment room setting. For movies, the soundbar volume usually hovered around the 30s (100 is max) and the subwoofer was set to its default midpoint.

Dialogue was also nicely rendered by the soundbar, resulting in full-bodied speech with strong fidelity that was always easy to hear. Less aggressive material, like HBO's 'Girls,' also sounded great, demonstrating the unit's versatility. But as initially inspiring as the speaker's performance was, more testing did reveal a few occasional flaws. While the speaker handles complex layers of sound well enough, when there's a lot of loud activity at once frequencies do tend to get just a tad muddled. Likewise, the soundbar can have a slightly boomy quality. In addition, certain low frequency cues tend to make the subwoofer's location stand out and the transition of low frequencies from the soundbar to the woofer isn't always seamless. This was especially true in certain scenes from 'The Avengers' and 'Game of Thrones.'

The infamous "wild fire" scene from 'Game of Thrones' is a perfect example. The sequence features a very distinct and varied series of bass effects, and the HT-SB602 just couldn't handle all of the nuances in the track. Don't get me wrong, the unit still produces an admirable rumble, but the bass sometimes lacks depth and consistency with the soundbar. For the most part, though, the device offered a remarkably balanced movie experience free from major distortion. Full and rather enveloping, the HT-SB602 was leaps and bounds beyond the TV's internal speakers and proved to be a very respectable contender among soundbar models in general.

For music, I engaged the unit's Music Mode and tested a variety of MP3 tracks including songs from Radiohead, Gnarls Barkley, Arcade Fire, Otis Redding, Smashing Pumpkins, and Fleet Foxes. Like the movie performance, I was generally impressed with the soundbar's versatility and balanced playback. Vocals were crisp and while the level of nuance and distinction in the highs, mids, and lows wasn't as pronounced as on a higher-end stereo system, I didn't notice any predominate signs of sharpness or muddiness. Likewise, the subwoofer seemed to blend in quite well with the sample tracks I played.

In addition to MP3s, I also tested 'The Grateful Dead Movie' Blu-ray and once again came away very impressed by the soundbar's deep and spacious qualities. The long speaker is capable of creating a very wide sense of scope and space, leading to a surprisingly immersive concert experience for a two channel setup. Crowd reactions felt dispersed and the music had solid dynamic range. With that said, low frequencies in the soundbar did come across as a bit overpowered here and there. 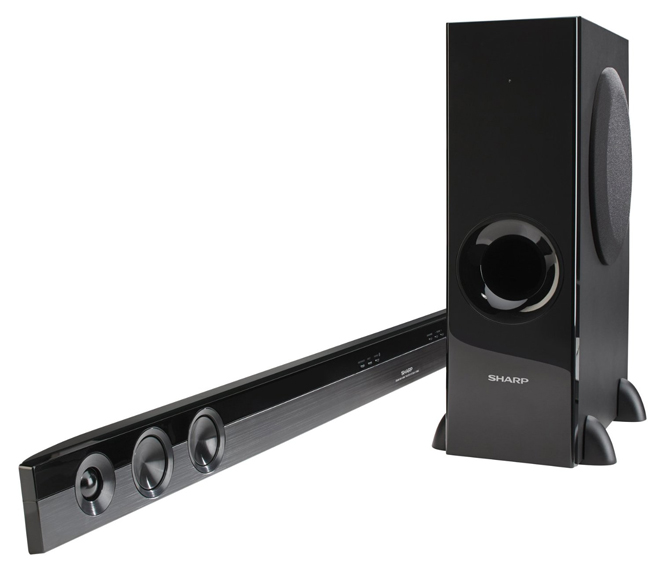 Finally, I also tested the unit's Bluetooth connectivity by pairing the system up with my Galaxy S4 smartphone. I simply pressed the Bluetooth button on the remote, located the soundbar in my smartphone menu, and in a few seconds they were connected. Playback sounded good and I was even able to cycle through tracks from the soundbar remote instead of my phone.

On the gaming front, the soundbar offered solid but not quite exceptional performance. I sampled a few titles on my PS3 like 'Killzone 3' 'Star Wars: The Force Unleashed II,' and 'Uncharted 2' using the unit's Game Mode. As it was with movies and music, playback was similarly engaging but I found the soundscape to be a little less spacious with games. Effects cues from the left and right weren't as distinct as a full stereo or surround sound system, but the soundbar held its own nicely, providing a huge improvement over the TV's integrated speakers.

For a traditional 2.1 soundbar in this price range, the HT-SB602 delivers very strong performance and a solid array of features. With analog, digital, and two HDMI ports, the unit offers plenty of connection options, and the ARC and 3D pass-through support are both very useful additions. Likewise, customers also get Bluetooth connectivity for streaming music from other sources. Though there are some small issues here and there, audio quality is very impressive for its class, resulting in a mostly well-balanced speaker and subwoofer combination that creates a very spacious and full soundfield. Compared to the previously reviewed VIZIO S3851w-D4 5.1 soundbar system, the Sharp has the definite edge when it comes to overall sound quality and connectivity. With that said, the VIZIO is still better suited for smaller TVs and offers a true surround sound experience that this model simply can't produce. Customers with 60-inch or larger TVs looking for an impressive but still space saving upgrade to their integrated TV speakers should not hesitate to check out the HT-SB602. For this size and price, it's easily one of the better soundbar options available, serving as a 2.1 savior for audiophiles sick of subpar built-in television sound.